I owned a Virtual Boy. There, I said it. For most of my life I’ve been obsessed with virtual reality, and Nintendo’s infamous failure of a system was my first real taste. Sure, it only had one color, and it looked silly sticking your face into what looked like a cross between E.T. and one of the machines from War of the Worlds, but I actually loved the thing. I have fond memories of berating Toad as my doubles partner in Mario’s Tennis, and of flying a wireframe spaceship into a giant wireframe face in Red Alarm. Heck, I even wrote terrible fanfiction about Teleroboxer. 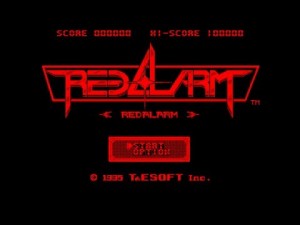 Unfortunately, VR would have to wait a while before the public was ready to fully embrace a version that could output more than red lines and didn’t look quite as stupid on your face. I don’t even know what 10-year-old Nathan would have done if he could have seen the Oculus Rift, Hololens, or HTC Vive. Crying probably would have been part of it, though, since those devices are currently way out of the price range for most people (especially considering the computer you need to run them!). Luckily, there are tons of companies out there that are building headsets that are far, far cheaper and only need a smartphone to work.

I was lucky enough to try one such headset recently when the fine folks at Proteus VR Labs sent me their Freefly VR. It sits around the upper mid-tier of mobile headsets, with the practically-free Google Cardboard at the bottom and the Samsung Gear at the high end. Each of these tiers serves a useful purpose for people who want to try VR inexpensively, and the Freefly boasts a price a bit lower than some of the more premium headsets, while retaining most of their comfort and quality. (Note: I have no idea if these “tiers” are an actual thing, but that’s how I view most smartphone headsets.) 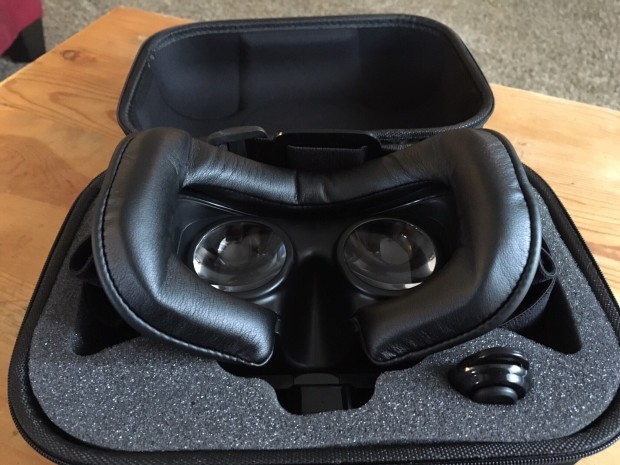 Now, up to this point my go-to headset was a super cheap piece of plastic called the Xiaozhai. It got the job done, but I was pretty blown away when I opened the box for the Freefly. It comes with a case, a remote, tons of documentation, and the whole thing just looks slick. At first I was a bit confused about how to use the damn thing since there are so many little knobs and sliders on it, but it’s not too complicated if you study it for a minute or so. (Or read one of the little books it comes with.)

Once I got the straps adjusted and had my iPhone 6S securely in place (with a handy red line to center it), the first thing I noticed was how light it is. It was slightly surprising given how solid it looks, and I’m glad it doesn’t pull my face down with a bunch of weight. It’s still heavy enough that it kind of bounces around when you make sudden movements, but there’s only so much you can shave off when you have the weight of the phone to consider. The second thing I noticed was that it’s very comfortable, with nice leather padding around the edges. (Much better than the cheap foam on my last headset, anyway.) 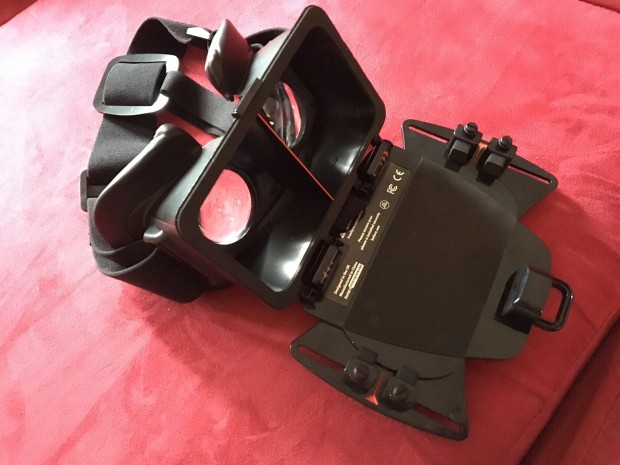 One of the main bullet points of the Freefly that I was excited for was the 120 degree field of view. Apparently that’s the highest currently on the market, and it’s supposed to make the experience that much more immersive. The other headsets I’ve tried feel like you’re looking through a square hole, and often the two pictures overlap and break the illusion. The Freefly doesn’t have that problem at all, and that alone makes it one of the better options you can buy.

Part of the effect comes from how close the “screen” appears to your face, greatly minimizing any borders that otherwise would be there at the edges. It’s sort of like watching TV with your nose inches away, and while the immersion is great, it definitely put a bit of a strain on my eyes (as you’d expect from watching a TV that close). In fact, whenever I load up an app or game and put the headset on, it takes about 10 seconds or so for my eyes to focus correctly. It’s not a big deal since it doesn’t take long to acclimate each time, but it’s worth mentioning that many other headsets (including the cheap one I was using before) have the ability to adjust the lenses to make the viewing more comfortable on the ol’ meatballs.

Another issue I had was blurriness around the edges of each lens. It’s not too bad, but it’s definitely there and compounds the focusing problem somewhat. There were several times when I’d be sliding the headset around on my face trying to get the perfect viewing position, and part of me wishes there was some kind of lens adjustment to sort all that out. 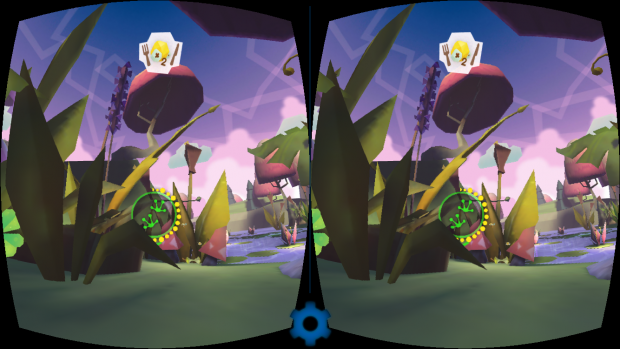 Once you get a good position, though, the Freefly is pretty amazing. It’s very comfortable even during long sessions, and the sense of immersion that wide field of view provides is remarkable. At the bottom of this article I’ll list some of the apps and games I tried, but suffice it to say I vastly preferred the Freefly experience over the flimsier headsets I’ve tried. Everything just looks and feels better. 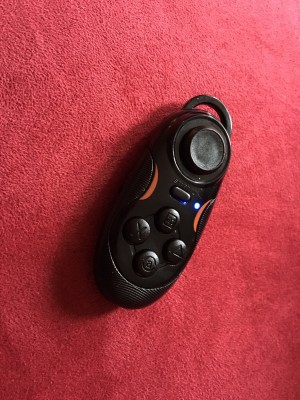 Speaking of games, one disappointing note is that the little controller the headset comes with (called the Glide) doesn’t work so well with iPhones. Indeed, I was told it’s mainly there for Android users, although a newer version is apparently being released soon which will play nice with iOS. I have no idea how it’s supposed to work, though, since the current one doesn’t appear to come anywhere close to matching Apple’s weirdly strict specifications for MFi controllers. Maybe it’ll use some workaround like the old iCade keyboard trick, perhaps? What I can say, though, is the little device sure looks neat, and the tiny analog stick and buttons feel pretty good for the size. (I’m also told that existing customers can have their Glides replaced free of charge when the new one comes out, so that’s pretty awesome.)

Aside from the controller problems (which will hopefully be solved soon) and my issues with focusing, the Freefly overall is easily the best iPhone VR headset I’ve tried. It’s comfortable to wear and is surprisingly light despite how sturdy and “premium” the materials look and feel. Plus, it comes with a case! How cool is that? In my opinion, though, the really killer feature is that gloriously large field of view, which really sucks you in. It may not be as crazy-immersive as an Oculus Rift, but for roughly a tenth of the cost (and no tricked out computer required) it’s an impressive little headset indeed.

You can buy the Freefly VR on Amazon.com or the Proteus website.