We have officially hit Touchstone Number 40. That’s a lot of Hearthstone (Free) news, isn’t it? Thank you for reading every week, and hopefully you’ll continue to enjoy this column. On with the news, now. Blizzard continues to tease us with Whispers of the Old Gods spoilers, and the cards we’ve seen so far definitely look intriguing. Whether they’ll actually see much play is hard to tell, but it’s a fun mental exercise trying to guess how the meta will look once we lose GvG and Naxx while at the same time getting all these new cards. We also have news on the latest patch, including the latest Hero portrait to hit the game, a question on whether Wild should be the default mode, and plenty of tournament news. And, as always, we have some very entertaining and informative videos, too. On we go, then.

A Look at the Old Gods in Warcraft

With the new expansion coming in the next couple of months, many players have been trying to figure out the role of the Old Gods in the Warcraft universe. HeartHead put together a cool story that talks about the various Gods in the context of Warcraft and offers details about the boss encounters and the Gods’ roles. So, if you want some more lore, check it out. 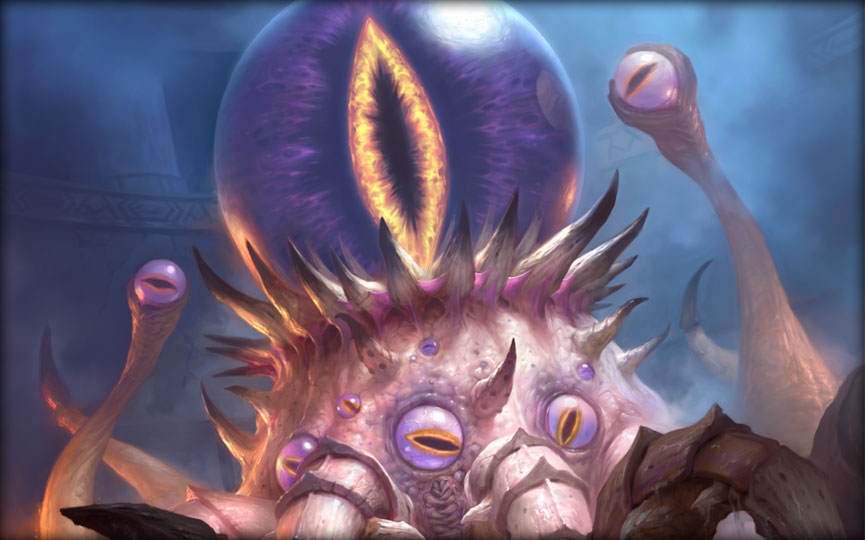 HearthHead has been doing a great job pulling together various tweets from the developers that give us more information about the game. When it comes to WOG, Brode admitted that the large gap between announcement and release isn’t ideal but is necessary and explained that while C’Thun and his cult are banned in the Arena, they can still be summoned by various minions. There are also many details about how C’Thun will interact with various cards, lore clarifications, and more, so go check it out.

Check Out All the Whispers of the Old Gods Spoiled Cards

Although I’m pretty sure you’ve seen all the spoiled cards so far, HearthHead has a convenient page with all of them that lets you see what’s coming next month (or later). We haven’t seen too many cards so far, but the ones we’ve seen seem to be fun; yes, some of them will probably not see high-level competitive play, but not all of them are meant for that. I wonder which of the older cards will synergize well with these new ones and how the meta will look after the upcoming expansion. Check out the spoilers here. 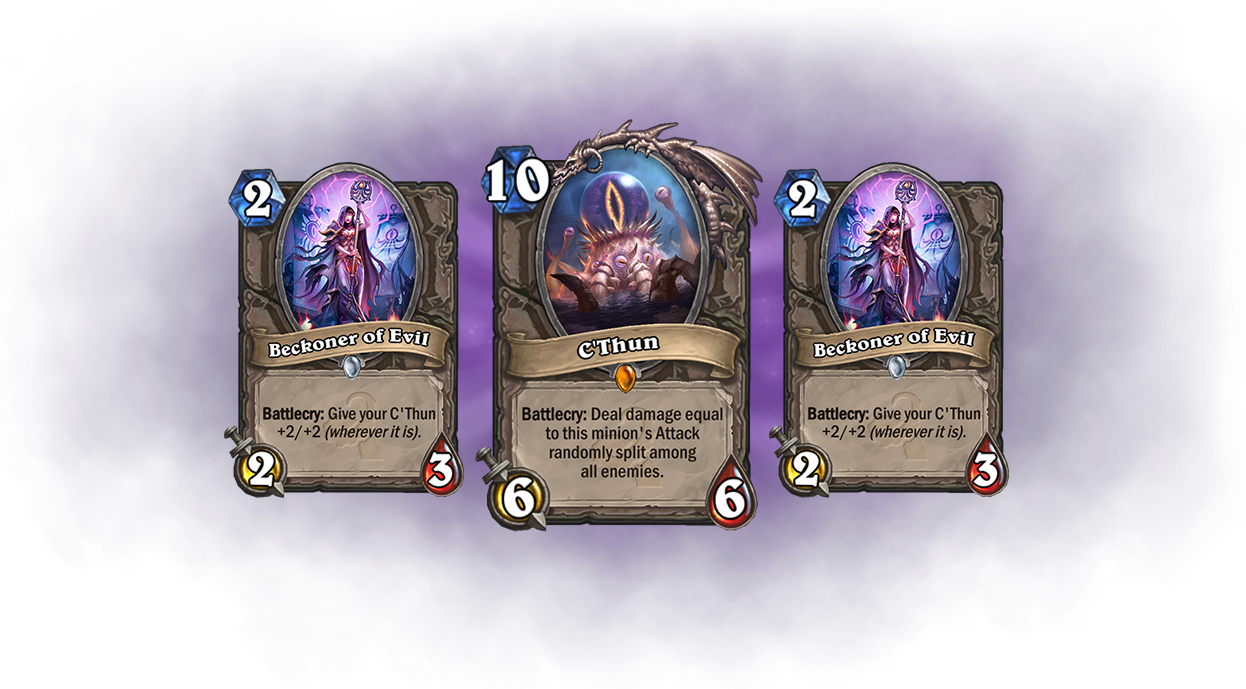 Should Wild be the Default Format?

This interesting BlizzPro Story raises the question whether Standard should be the default format for the game and claims, instead, that Wild would actually work better. According to the writer, the Standard format benefits competitive players and newer players, who won’t have too many cards to collect. However, when you dig more into the issue, it becomes apparent that the high amount of cards available in a format isn’t a problem for new players. At the start, newer Wild players will be matched with equally new Wild players, so the game won’t be too difficult. Once they start ranking up and meeting polished meta netdecks, they will start encountering players with vast collections, which sounds like a disadvantage for the newer players. However, there should still be cheap strong decks that will allow players with smaller collections to compete with the rest of the players.

Also, the most “serious" competitive players will be playing Standard rather than Wild, which means Wild should have an easier ladder grind than Standard, making it a more welcoming experience and one with more space for crazy decks and experimentation. The benefits of having Wild be the entry format for newer players might even allow Blizzard to make the Standard ladder better adjusted to the competitive scene. What do you think? I hadn’t thought of it the way the writer has, but I think he has a good point about Wild being an easier entry point to the game.

In this story, Rdu talks about the changes he would love to see in 20 Classic cards that would really improve the metagame. Some of his changes are similar to Reynad’s from last week – like Innervate making the next card you play this turn cost 2 less and Savage Roar costing 5 and giving +3 – but Rdu also plays around a lot with the health of minions like Keeper of the Grove and Ancient of Lore. Many of his changes have to do with spells, making Flamestrike an 8 mana card and Blade Flurry a 3 mana card. Go here to check out the proposed changes and let me know if you agree with them.

As Blizzard promised, last week we got patch 4.2.0 which brought Deck Recipes, 9 extra deck slots, an early look at how the UI will look once we have the format changes, improvements to the Collection manager, and more. We also got a new Hero Portrait, the Paladin Liadrin, that can be obtained by getting a new World of Warcraft character up to rank 20. And, finally, we got the pre-order for the Old Gods expansion; if you don’t remember how it works, for $49.99 you can get 50 packs as well as a pretty cool card back. While you won’t be able to open the packs before the expansion goes live, the card back is available the moment you pre-order. Go here to check out the various additions/changes.

You Can Now Search Your Collection Much Better Than Before

Patch 4.20 brought some much-needed improvements to the Collection search feature mainly by allowing more words and more specificity in the search bar. For instance, you can search for Attack:1 to get decks with only one attack, or health:7+ to get cards with health of 7 and over. There are also keywords like “owned:1," which shows you cards you only own one copy of, “extra," which shows you cards you have more than 2 copies of, “golden," “new," and more. You can even combine keywords now. A much needed improvement since our collections aren’t getting any smaller. Check out the blog entry about the changes here.

Apparently, though I hadn’t really realized it, Hearthstone is almost two years old, and Blizzard wants to celebrate the game’s second anniversary with all its players. Blizzard wants to create a celebratory mosaic with players showing their love for the game. If you submit a photo, you’ll be entered into a drawing where the grand prize includes a batch of Hearthstone goodies and a trip to Blizzard headquarters. If you want to submit a photo, go here to check out the details.

Your Americas Winter Champion is Amnesiac

We’ve talked about in the past about Team Archon’s Amnesiac, the very promising 15-year old who’s been rising through the ranks of competitive Hearthstone, and at the HCT Americas Winter Championship, he finally broke through, winning the whole thing. You can watch the interview below where he talks about the tournament, his deck strategies, and his future plans right after winning the championship. The championship was quite entertaining, and Amnesiac did some terrific plays on his way to the championship. Check the interview and the finals below.

Decks from the HCT Americas Championship

If you want to check out the decklists of Americas’ top eight at the Winter Championship, go here. As you’ll see, most of the decks were control and combo oriented, with plenty of Warriors, including an Elise Warrior for champion, Amnesiac. There were also your usual Freeze Mages, Renolocks, and Oil Rogues. Amnesiac also brought an Anyfin Paladin while SkyHigh brought an Egg variation of Secret Paladin. So, go check out the decks; they won’t be of much use to you in a month or so, but there’s still time for some quality netdecking.

Spring Championships Change from Best of 5 to Best of 7

Trump’s Review of Whispers of the Old Gods

Best Moments of Anyfin Can Happen