There are a handful of genres that I will likely never tire of, and one of them is dungeon crawling. Whether it’s of the CRPG or ARPG variety, the thrill of soot is something I find insatiable. Whether it’s “one more run" for that slightly better chestplate or the thrill of beating a new boss for a horde of gold, the constant positive reinforcement is on point. That’s how Don’t Die in Dungeons (Free) feels.

Using a simplistic control scheme, players can move left or right, jump, and attack. It’s all done by way of virtual buttons, which are responsive to the touch. I especially like the attack animations here, as they usually don’t consist of a simple slash, and vary with different patterns. Having said that, all of it is slash-oriented, so don’t go thinking you can spring any combos or anything. What you see on-screen is basically what you have to work with, for better or worse.

The most direct comparison I can think of formula-wise is probably Rogue Legacy. It’s not really a “rogue-like" in the sense that the game is level-based, and you can merely restart wherever you want without the fear of permadeath, but the 2D formula is very similar, as is the art style. Advanced moves would have been appreciated (or even nuanced tactics like blocking or firing back projectiles, Dead Man’s Volley style as in The Legend of Zelda series) as the appeal of a two-button system starts to wane after a while, but again, the action is fun enough where you’ll mostly forgive it. 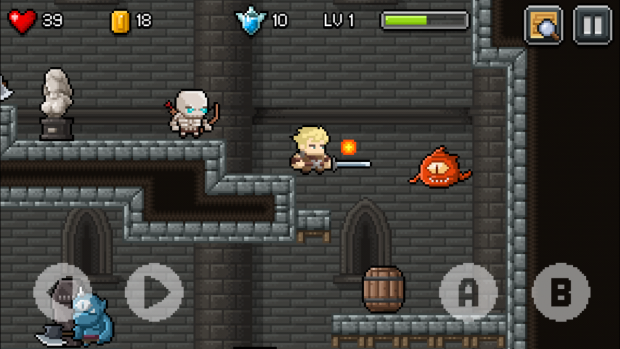 One of the coolest features in Dungeons is the ability to zoom the entire map out to get a giant view of the action. The best part? It’s actually playable, so you don’t have to constantly switch back and forth to figure out where a certain chest or item is. Even on a small screen the action is fairly easy to read too, and I finished multiple areas using this viewpoint. Thank goodness, too, as a few had a crucial key or item just out of my grasp, and I never would have thought to explore specific areas without it. There have been a few games that have done this in the past (most notably Castlevania HD on consoles), and it’s a welcome feature indeed.

Beyond that, your standard dungeon-esque features are still intact. Hidden rooms? Check. Items to locate and upgrade at the expense of health? Check. Maps generally aren’t all that complicated, but do have a nice little labyrinthine feel to them in some ways without getting overbearing. It’s great to explore, in other words, but you won’t feel like you’re getting completely lost. The map layout has its limits though. I would really like for there to be more in-depth dungeons at some point, even if they took a lengthy amount of time to complete. It’s great to have a simplistic feel especially at the start, where you can pick up and play at any point, but really, there’s a lot of potential here that just isn’t reached.

I think maybe the philosophy was a bit conservative in terms of the level-based presentation, like the developers didn’t want anyone to be overwhelmed in a sense. But a big survival mode-esque world, or a randomly generated Metroidvania RPG adventure as an IAP is something I’d be interested in. Maybe a sequel? 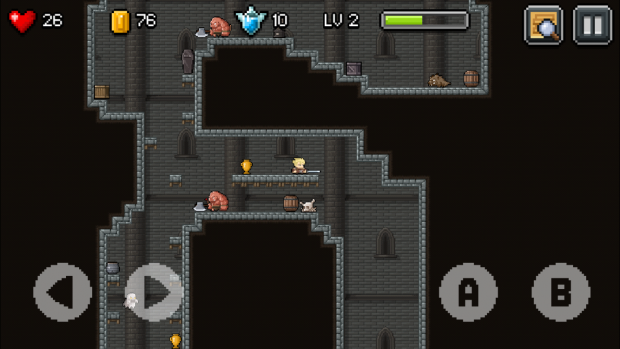 It’s also important to note that Dungeons is a free game, which is actually rather astounding given the fact that I wasn’t enticed one bit to pay for it. There are a few premium add-ons available like extra revives, a harder difficulty, or more coins, but none of it feels necessary. In fact, I chipped in for the Nightmare Mode just to feel like I was buying the game. I don’t normally mind ad-supported games to an extent, but the clips are very long here, deterring me from using them. I wish more games did this, and in spite of Dungeon‘s flaws it comes out on top in this avenue.

Some of you may already be worn out in terms of platformers on mobile devices, but Don’t Die in Dungeons is better than a lot of similar games on the market. Although combat never really elevates itself to the level of a true action game, there’s enough fun to be had traversing the various dark depths within to last you a while — and without spending any money, mind. And sometimes, that’s all you can really ask for out of a bite-sized experience.