Patchwork($3.99) is a very cute game. It has a charming facade of quilty-buttony comfort that is really quite inviting and calming. It’s almost a shame that the game is very much a game of cut-throat cold logic devoid of much wiggle room around the fact that the person who can plan ahead best will usually win. The master mind behind such board game greats as Agricola($4.99) and Le Havre($9.99), Uwe Rosenberg, followed the pattern with a really great strategic/economic design on this one.

This game is built as purely a two player game. While it does not lend itself to a flexible party size, Patchwork follows the golden rule of strategic gaming: easy to learn and difficult to master. In the course of the game, you will accrue buttons that allow you to purchase scraps of cloth. Each scrap of cloth has not only a button cost but also a movement cost and is the method of advancing along the game board. Each player starts with an empty quilt board that can be filled in with the tetris-like scrap pieces. Whomever is further behind on the game board takes the next turn and you can actually engineer things to take multiple turns in a row. Each turn you can select a single scrap out of a selection of three or pass your turn and advance on the game board to be exactly one space ahead of your opponent. Your mission is to gather more buttons and fill out your quilt board as much as possible before reaching the end of the game board. Whomever amasses more buttons and loses the least amount of points for open spaces in their quilt board wins.

It may not be obvious on first glance, but the main interaction you have with the other player is manipulating them into bad positions either by forcing a long distance pass or by controlling who gets a better selection of scraps. By looking down the assembly line of scraps you can get that chess-like ability to plan out your moves in advance and then curse your opponent for making a choice you didn’t expect. The only random element in the game is the scrap assembly line. Any board game that avoids use of dice instantly ingratiates itself to me with a great first impression. Some of the best games I have ever played on the table top leave the old six sided devils at home and the mechanics of this one definitely do not disappoint. Patchwork is a great starting point to build an app around. 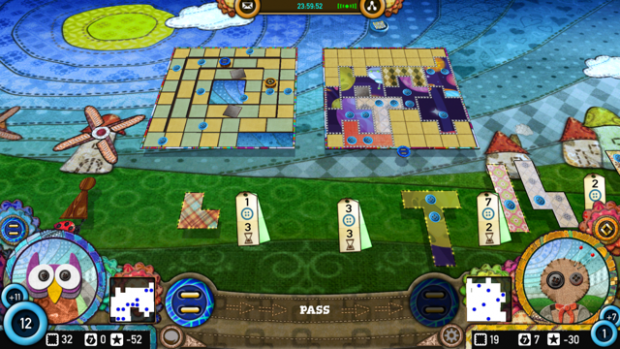 The app has some very cool animations and like I mentioned before the overall ambiance is very thematic. If you are looking for a quilting themed board game, you probably won’t find an app that is nearly as hand tailored to your need as Patchwork is. The app has an online mode that is kind of a weird async/real time mix. Each turn has a 24 hour time limit but you can play rapidfire with no breaks in between turns if both players are at their device. There are two themes that come as default and three additional IAP themes that will keep your quilt looking spiffy even after many games. The game unsurprisingly takes up little room on my iPhone. At 74mb you won’t strain your harddrive to keep this game around. This app also had a few bugs that were recently patched up and sewn together.

In the multiplayer mode there was a bug that caused a display error with some of the patches on the assembly line. It was thankfully not very common and while frustrating, it did not break the game. There was also a bug in pass and play mode which was a lot more serious. Each time button math was done for either character, player 1’s button total would be affected. Internally the math was done correctly, but the display ended up showing incorrect amounts, even negative amounts for player 1 and player 2 only showed as the starting amount of 5 buttons for the whole game. The local pass and play mode was virtually unplayable but the newest patch promises that both of these are in the past. 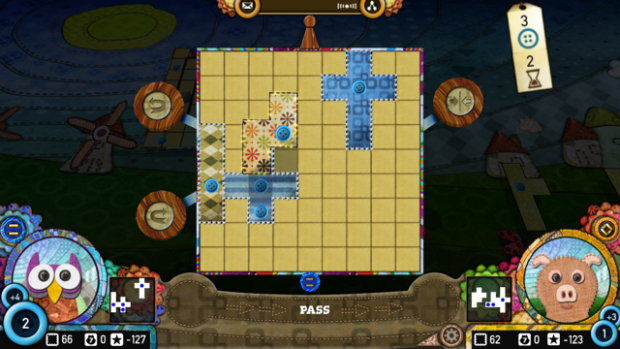 I have not gotten a chance to thoroughly test the newest patch, but it seems like they are meticulously tracking down all bugs big and small. If you are looking for a board game designed for two players that feels strategic but tries out some fresh ideas, Patchwork delivers a replayable experience that weaves a great theme with solid mechanics.