I think there’s a pretty good game buried somewhere in The First Tactics ($1.99). It’s hard to be sure at times because there are so many bad choices with the presentation. If you can cut through the obvious vestiges of the game being designed as free-to-play, and somehow comprehend an extremely poor English localization that only makes things more confusing the more it tries to explain itself, you’ll find a small-scale yet pleasingly complex turn-based strategy game. I’m just not sure if the good part of the game is worth dealing with the multiple barriers it’s encased in, particularly in a genre that has so many strong examples on the platform that don’t require you to jump through such hoops.

This is normally where I’d give you the story set-up, but I had trouble following much of it. You seem to be some kind of resurrected warrior with a mysterious past. You wake up in a dangerous forest where a woman named Medel finds you and saves you from some orcs. She takes you back to her base where her commander, after listening to your story, declares you to be the new leader of his mercenary group. Your character is mostly interested in recovering his memory, but he’s eager enough to take on the job. The story is unveiled in snippets between each of the game’s stages, with additional background information dished out through side-quests. I’m not sure how it reads in other languages, but the English text is so mangled that even with all of my personal experience dealing with second-language speakers, I had a lot of difficulties making sense of it all. 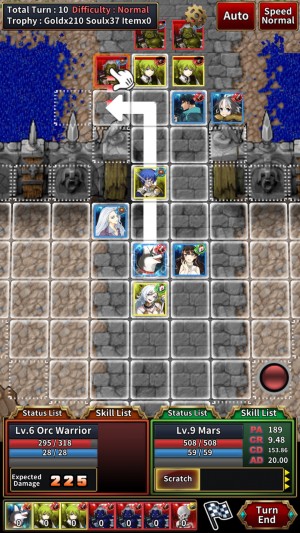 If it were just the story that were obfuscated by that problem, it wouldn’t be such a big deal, but The First Tactics has a lot of unusual play mechanics that it needs to explain. While the core gameplay is fairly straight-forward turn-based tactics similar to games like Fire Emblem or Kingturn RPG (Free), there are a lot of other gameplay elements that imply this was once a social RPG-style game like Brave Frontier (Free) or Terra Battle (Free). There’s a stamina meter that you use when you take on a mission, but it refills so quickly that you’ll probably have recovered half of what you used by the time the battle is over. If you happen to run out somehow, don’t worry! The game heaps potions on you that can refill the whole thing with a single use. There are multiple currencies, one of which can be bought with real money, but the game heaps so much of all of them on you that you aren’t likely to run out anytime soon as long as you don’t go to town on buying everything. There are all kinds of side things you can tie your characters up in that take real time, and several ways to upgrade, fuse, evolve, and every other social RPG verb you can think of.

The game was clearly built to be a long-haul grind, but for whatever reason, the developer decided to charge a dollar for it instead and tilted the balance of everything heavily in the player’s favor. It’s nice, and it’s certainly unusual, but the end result is that a lot of the extra things that are simply part of the social RPG grind aren’t very useful here. There isn’t a whole lot of incentive to go diving into daily dungeons and things like that when you can simply plow forward with the plot and not run into any serious obstacles. Anyway, those things are here, they’re poorly-explained, and you don’t really need to worry about them if you don’t want to. If you want to max out all of your characters and completely fill out your mercenary group, feel free to mess around with that stuff, but you certainly don’t have to. 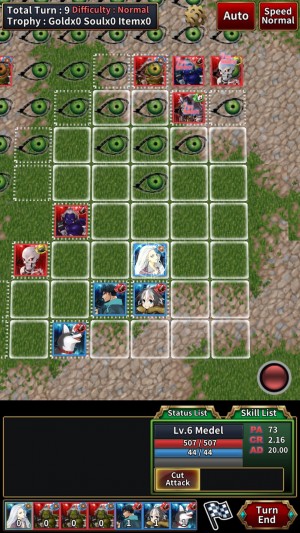 This is all probably sounding like a headache by now, and you might be wondering why I’m recommending the game at all. Well, when it comes down to it, the core gameplay in The First Tactics is quite well done. There’s nothing out of the ordinary going on as far as turn-based tactical RPGs go, but the game’s approach to those solid principles works well. Maps are large enough to give you room to romp around in, complex enough to make you consider positioning, yet small enough to keep things moving at a good pace. Moving the camera around the field is a little more awkward than I’d prefer, but aside from that, moving your pieces around, attacking, and using special abilities all comes easily.

Although characters are only represented by icons, the game uses sound effects to help the impact of the blows come across, giving things a nice solid feeling. The game does a couple of neat things with sleeping and guarding enemies that force you think about how you move around the map and which targets to prioritize, and while the enemy AI isn’t incredibly sharp, it’s smart enough to keep your attention. Overall, the game’s a bit on the easy side on its normal difficulty level, so if you have experience with this kind of game, you might want to choose a higher difficulty setting to start with. I suspect that’s a result of the game’s haphazard conversion to a paid game more than anything else. 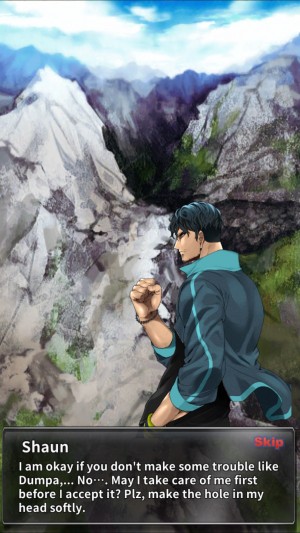 I really do think the rough English translation is the biggest issue with the game, however. It hurts the story, the player’s understanding of the game’s various systems, and even explanations of fundamental mechanics. The First Tactics is a very text-heavy game, and with the script in the state it’s in, a great deal of it is pure nonsense. It’s a shame, because the game obviously has had some work put into its story, world, and character, and it has a great sense of humor about itself. With a good localization, I think I would recommend the game much more highly. As it is, if you’re thinking about playing this game, I really can’t stress enough how poor the translation is. I can’t say the weird English isn’t charming at times, but the farther into the game you go, the more frustrating it is that things weren’t done better in this regard.

The First Tactics is kind of like a pomegranate. It’s good, but it’s such a pain in the neck to get at the delicious bits that it’s tempting to just grab something easier to get into. The game shows clear signs of being a free-to-play social RPG at some point, and as such the balancing is kind of messed up across the board. The text is unreadable at worst and unintentionally hilarious at best. But just like I’ll put up with a pomegranate’s ridiculous nonsense from time to time because I like the taste, I think I’m willing to deal with this game’s oddities to enjoy its simple, satisfying, strategic battles. If you feel like you could do the same, it’s probably worth checking The First Tactics out.