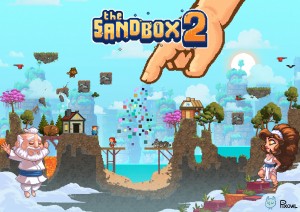 After developing the very inventive and creative The Sandbox (Free), Pixowl’s been steadily working on developing a better version of the original with higher resolution pixel graphics, ten times larger world size, new quests mode, new campaigns, pixel world maker and game maker, and more. From the looks of the various videos posted in our forums, the game is shaping up to be a great, well, sandbox. In this newer version, you can do things like designing your characters and levels and then controlling characters in-game to test your level design or check out other players’ inspiration. The developers are really paying a lot of attention to the sharing aspect of the game as shown by the online gallery players will be able to use to share their creations both in video or stills.

Many recent iOS games have benefited a lot from allowing players to build their own levels and share them with others – for instance Geometry Dash ($1.99) – so it’s not surprising to see PixOwl continue to emphasize the creative side of its game. If you check out the forum page, many of the developer’s entries are all about showing off what players in the beta have managed to create so far. Today, they’ve even put the game’s title up for vote in our forums, so here’s your chance to have your voice heard. Some of the titles are The Sandbox 2, The Sandbox Evolution, The Sandbox Legend, and so on. Go here if you want to vote, and keep an eye on the forum page for more info, screens, and beta invites.