Gameloft just can’t seem to catch a break lately- They’ve got studios closing up left and right, and this weekend hackers have absolutely been going crazy in Order & Chaos Online (Free), their WoW-like MMO which launched in late 2011. This is one of those pieces of MMO history that I feel like happens way more often than you’d think, but you only ever read about after the fact. Apparently a player in Order & Chaos (And again, we’re talking the first one, not the sequel Order & Chaos 2: Redemption (Free).) got access to something that players are referring to as the “test box" and things have been going nuts ever since.

What is the “test box?" Well, it appears to be a big piece of the toolkit that GM’s (or “Game Masters," the online support people in an MMO) use to do things in games. It’s not a unique thing to Order & Chaos by any means, MMORPG history is full of surprisingly hodge podge ways that these games are held together, whether it’s through special items, secret commands, or other stuff that GM’s use to fix player problems and keep the game running like a well oiled machine. In the case of Order & Chaos, those functions seem to be done through this test box which contains what are supposed to be GM-only spells and other functions, which anyone who possesses the test box can use.

The above video shows what it all looks like in action, but using the test box, players can do nearly anything they want in game, from creating infinite gold to creating items, from summoning any mount in the game to… infinitely creating additional test boxes to give to other players. We’ve been told test boxes have been spreading like wildfire over the last couple days, and the state of the game right now is, in a word, chaos.

Gameloft has posted on Facebook that they’re looking into all this and everything should return back to normal later today, but how do you even unroll from this? Rumors are spreading that players have had access to test boxes for months now and have been selling items and gold, and if that is true, this is going to be one hell of a mess for Gameloft to clean up, as who knows how detailed their logging even is to trace this all back, if it’s possible to roll back at all. Even if they remove all the artificially created items and gold, the existence of those things for (allegedly) months now have had rippling effect across the in-game economy which is impossible to undo. 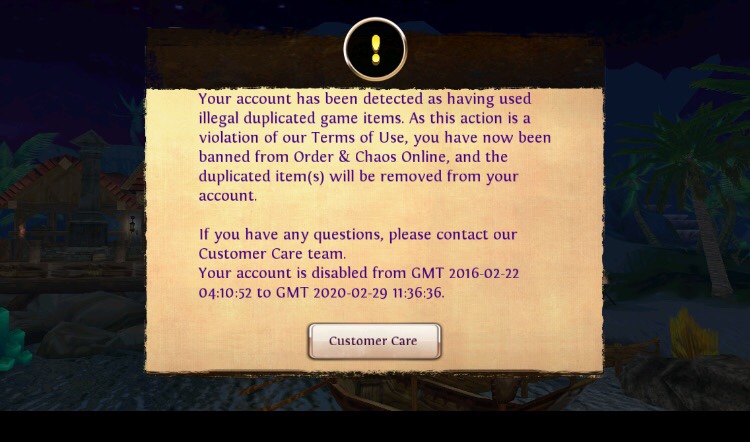 Complicating things further, what do you do to people who have test boxes? They’ve spread like wildfire in the past couple days, it seems like tons of people have them, including unsuspecting players who just accepted a trade request from some random person they don’t know. Banning everyone with a test box is probably the way to go, but is that fair to people just accepting random trades?

Anyway, I’m super curious to see how this all plays out, as Gameloft has one gigantic mess on their hands here. If there’s any up-side here, it’s that this is at least one of their older games, and not a flagship title for them… But, being an older game, it means there’s players out there who have (potentially) been playing for five years now. To be a fly on the wall at Gameloft this morning…