After Kim Kardashian: Hollywood and Katy Perry Pop, Glu has done it again, bringing another celebrity game to the App Store. This time around is Britney Spears: American Dream, which is currently in soft launch in New Zealand. After a few, well, rocky years, Britney is on the rise again following a few successful records and her quite successful Las Vegas stint. So, a Glu game based on Britney shouldn’t be much of a surprise to anyone. The game is, of course, all about becoming a hit pop singer, rising from the bottom to assume your place next to Britney at Planet Hollywood. You get to pick names and genres for your hit singles, socialize with other stars, share your creations with your friends (of course), perform at top venues, fend off rival singers who want to knock you off that number 1 spot, and upgrade your look and gear. 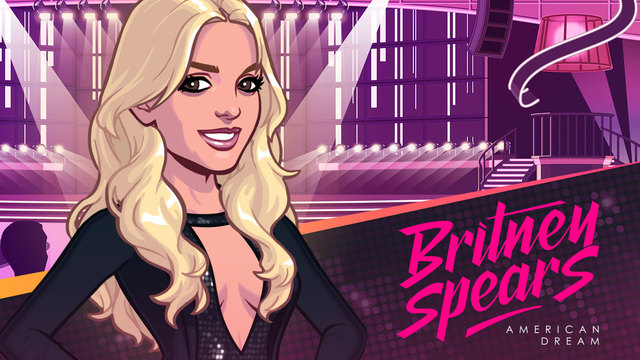 From the time I’ve spent with the game, Britney Spears: American Dream plays pretty much the way you would expect it to. The game starts with you having just finished singing with Britney, and the pop star herself asks if you remember how you became so famous. Guess what? You do remember! And back to the beginning of your career we go when you were just a nobody who managed to sing in front of Britney at a Starbeans (yep) and immediately got her to invite you to a party (if only life worked like that).

From there on you try to sing at nicer venues to make more money to buy nicer clothes so you can sing at nicer venues and so on and so on. The singing part consists of popping things on screen as fast as you can, so nothing exciting or musical. But hey, there’s plenty of Britney music playing the whole time and even Britney’s voice, occasionally. I don’t expect the soft launch period to last for long, so stay tuned if you’ve been waiting to sing with Britney all your life. If you have a NZ account, check the game out here.