For me, one of the marks of a good puzzle game is when the main mechanics are so simple and intuitive that you have a hard time seeing how the game could possibly get challenging–and then it does. Pull My Tongue ($0.99), the latest game published by Noodlecake, is kinda like that. The first level introduces you to the core concept, which basically never changes: There’s a lizard who wants a piece of popcorn, and all you need to do is pull the tongue out of his mouth until it reaches his buttery prize. Sure, the game eventually starts adding more things to get in his way, but at the end of the day you’ll still be simply stretching the tongue to the popcorn. 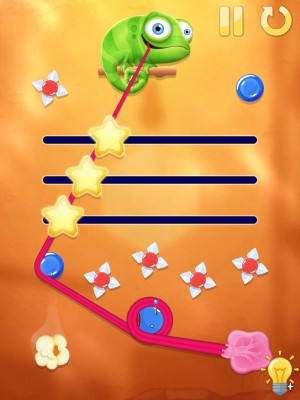 The lizard’s name, it turns out, is Greg. And he’s a chameleon, to be more specific. Other than the protagonist and his tongue, though, the game was clearly modeled after Cut the Rope ($1.99). It has the same cute and cartoony aesthetic, with single screen physics puzzles and a star collecting system to rate how well you complete each one. Heck, even the title adopts the same “VERB a NOUN” format. And, of course, the main goal revolves around feeding a treat to a creature.

Despite its very obvious inspiration, though, the game is still quite enjoyable, and the tongue mechanics feel different enough from most other puzzlers that the similarities to other games didn’t really bother me. And let’s face it: the tongue is basically the star of the show, here.

It’s slimy and pink and gets thinner the more you pull on it (quiet in the back), and has just the right amount of realism and cartoon physics to make it enjoyable to interact with. It can’t extend forever, though, which is important since you’ll be wrapping it around pegs and giant balloons and stuff. For example, there might be a dangerous spike preventing you from stretching the tongue in a straight line to the popcorn, so you’ll have to pull it over to the left to loop over a peg and then head toward the popcorn at a safer angle. 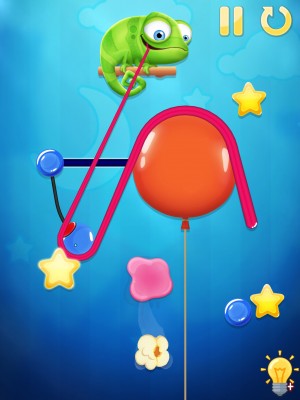 For better or worse, it’ll often be almost laughably easy to just grab the popcorn and move on the next level, but the real challenge comes when you are trying to collect all the stars. There were many times later in the game when I’d have poor Greg’s tongue zig zagging all over the screen to grab every last star, and then I’d run out of slack just an inch shy of the popcorn. It’s times like those when the game really shines, and forces you to go back to the drawing board and re-evaluate the order in which you should be taking each obstacle.

And speaking of obstacles, it’s not all just static pegs and spikes suspended in the air. There are also pegs and spikes that move by themselves, and versions that you can move manually to line up the perfect path. The further into the game you go, the more you’ll start seeing new tricks and traps, like balloons (which I mentioned earlier) that can grow or shrink depending on how you tap them, buttons that control how other things behave, sticky gum that you can attach the tongue to so you can manipulate other parts of the level yourself, and zappers that look quite painful when you try to stretch through their energy beams.

Honestly, it’s hard to find much to complain about with Pull My Tongue. It’s a fun puzzle game that has a super simple and quite clever physics-based mechanic at its center, and it works well. It may be a bit too easy for some people, but I found it enjoyable and strangely relaxing nonetheless. In many ways it’s a nice throwback to the early days of the App Store when everyone was clamoring to the be the next cute physics game with a three-star rating system and a one dollar price tag. Turns out that formula works pretty well in 2016, too.