As I’ve said before, there’s nothing wrong with chilling out with a mindless arcade game. I grew up playing flashy shooters and beat ’em ups just as often as deep RPGs and point and click adventure games, and both philosophies scratch certain itches on any given day. The former mindset is most evident in Call of Commander ($0.99), which has some RPG elements, but mostly caters towards the part of your brain that likes to shut itself off.

Much like the Metal Gear Solid series, enemies have a vision zone of sorts, which you’ll need to avoid, lest your party drops like flies. It’s interesting in later waves when things get really hectic and tons of blast zones appear all over the screen. It’s your job to lead your troops not only to safety, but into an advantageous area to keep attacking to whittle down enemy forces. Of course, adding to your troop is paramount as well, so you’ll need to duck and weave some bullets to rescue them as they appear, tied up, on screen. 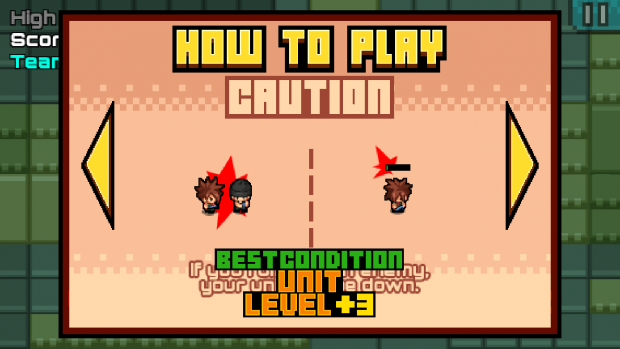 Bosses exemplify this requirement, as do vehicles that inject themselves into the fray. The digitized hit points and damage indicators almost feel superfluous at that point, as there’s so much going on that you can’t really keep track of it. That constant entropy is only truly released at the end of a session, once you’ve tallied up all of your challenges (like “defeat 10 bosses") and take a breath before you move on to your next game. If I had one major complaint gameplay-wise however it’s that certain elements feel rushed, particularly when it comes to the UI. As you can even see in the above screen, a text overlay is blocking the tutorial, which was a pretty odd thing to be greeted with. Given the simplistic intro it wasn’t a huge deal, but a lack of polish doesn’t help things either.

The arcade nature also begins to wear though once you realize that progress isn’t exactly evident or intuitive. There are level-up indicators and challenges that do carry over, but ultimately the currency system feels pointless. Characters have an attack, health, and speed rating, but even after a few hours of play I never really felt like anything was making a difference. This is a double-edge sword of course because it takes the pressure off of IAPs (which do exist, but in a very muted state), but also serves to ease players into frequent breaks. A lot of you can probably overlook this given the $0.99 pricepoint though.

With very little in the way of IAP and a “one more round" feel, Call of Commander is really easy to get lost with. Over time you’ll unlock more characters, race to have the highest score possible, and adapt to new tactics on the fly. The grid-like battlefield and weapon diversity serves Call of Commander well in the end. The developer seems to be keen on updating the game to add more gimmicks in over time, at which point it’ll be even easier to recommend.