As you could probably tell if you’ve ever seen my forum avatar, I’m a huge Calvin & Hobbes fan. Aside from how funny, intelligent, and surprisingly philosophical the strip could be, one of my favorite aspects was how the titular duo could go anywhere and do anything with just a cardboard box. It could be anything from a transmogrifier to a duplicator to a time machine, and each one led to a sense that anything was possible with a large enough box and an even larger imagination. Sky Chasers (Free) by Lucky Kat Studios attempts to tap into a similarly whimsical feeling, and–for the most part–it pulls it off. 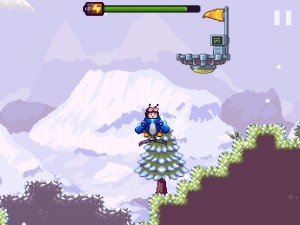 In Sky Chasers you play as a little bug kid with a jet-powered cardboard box. And now that I type that out it seems like an incredibly dangerous fire hazard. You’ll make your way through three different worlds floating, flying, and most likely bumping into stuff until you reach the end of the game or run out of fuel. Luckily, there are refueling stations scattered around in strategic locations to save your skin when you start getting low.

Mechanically, the game is essentially a cave flyer. It’s sort of like the fairly recent Cavernaut ($0.99) (a game I loved in my review), but instead of tilting your device, the game is controlled with taps. Touch the left side of the screen to fly up to the left, and touch the right side to move in the opposite direction. Later on you’ll also gain the ability to drop bombs by swiping down on the screen and fire weapons by swiping from side to side. It’s dead-simple and works pretty well for the most part. It felt a bit stiff to me at first, but that’s probably because cave flyers usually feature sleek little spaceships rather than corrugated boxes. 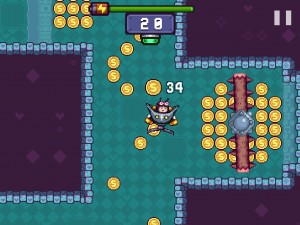 If you don’t want to feel like a homeless person on an acid trip, you can unlock different crafts to pilot by dumping coins into a vending machine, Crossy Road (Free) style. It’s not just a random paint job, either, as your fuel gauge grows with each unlock. It seems like some of the ships feel a bit different to control as well, but that could definitely be my imagination.

Don’t let the talk of coins in a free game scare you off, though, as the game’s monetization is pretty fair overall. Aside from the aforementioned Crossy-esque gumball machine mechanics, the game also employs a Retry (Free) like continue system. Each time you land on a fuel pad you’re given the option of watching a video to save your place. Unfortunately, this quickly gets pretty annoying since it doesn’t take long to run out of fuel (before you’ve unlocked more ships), and the frequent video interruptions are frustrating. Fortunately, there’s a premium unlock that removes the need to watch ads for checkpoint-saving. Unfortunately, even with the $2.99 unlock there are still ads in the game for continuing right where you last died. 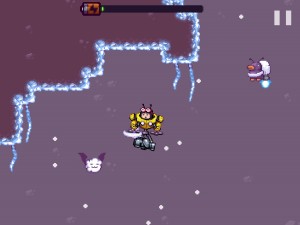 Even with the premium unlock, though, I still found it slightly irritating that the game brings up a little menu every single time you land on a pad. On the one hand it’s kind of nice that it’s there since you can quickly bank your coins and buy a new craft without exiting to the main menu, but I do wish there was a way to turn it off so you could play without any interruptions of any kind. Another gripe I have is that the game can be maddeningly difficult at random times. It feels like your craft’s hitbox is the size of Montana, and when you’re trying to fly through a small tunnel crowded with flying enemies while simultaneously swiping the screen to destroy ice blocks in your path, it can make you want to pull your hair out.

Presentation-wise, the game is absolutely fantastic. It has a quick and smooth pixel art style (as contradictory as that may sound), and all the ship designs are colorful, creative, and fun. The three environments you’ll be flying through–two forests and a snow world–look great as well. There are lots of neat little touches here and there, too, like how each ship has it’s own exhaust, and how water splashes up if your rockets get too close to a pond.

Sky Chasers isn’t the greatest cave flyer that’s ever flown through a cave, but it’s still a very good one. If you liked Cavernaut or Retry (and who didn’t?), then I think it’s safe that you’ll find lots of enjoyment here. It’s not without a few problems here and there, but the charming visuals, simple controls, plethora of crafts to unlock, and free price tag make this one easily worth checking out.