After spending the last two weeks with Vainglory’s (Free) newest hero, Reim, I have to say that he’s had the most challenging difficulty curve of any hero that I’ve written a guide for. With high-damage moves dependent on timing, sustain reliant on landing said moves, and middle of the road mobility, I found that Reim requires a player that will give him a lot of attention. However, with proper training (perhaps starting with our guide below), he has the potential to be a high end jungle front liner for any team down the stretch.

Before we get into specific team tactics let’s get into some general guidance about Reim’s individual abilities, as well as his Heroic Perk. Frostguard provides Reim’s basic attack with bonus crystal damage over a couple of seconds and also grants half the damage dealt as fortified health (fortified health is basically a shield that depletes with damage taken). In essence, the more damage is dealt, the more sustain Reim gets in a battle. In addition, Frostguard also chills opponents. Whenever an opponent is attacked that is already chilled, they also get a slow applied to them. Chilled status also becomes important for Reim’s abilities and will be further explained below. 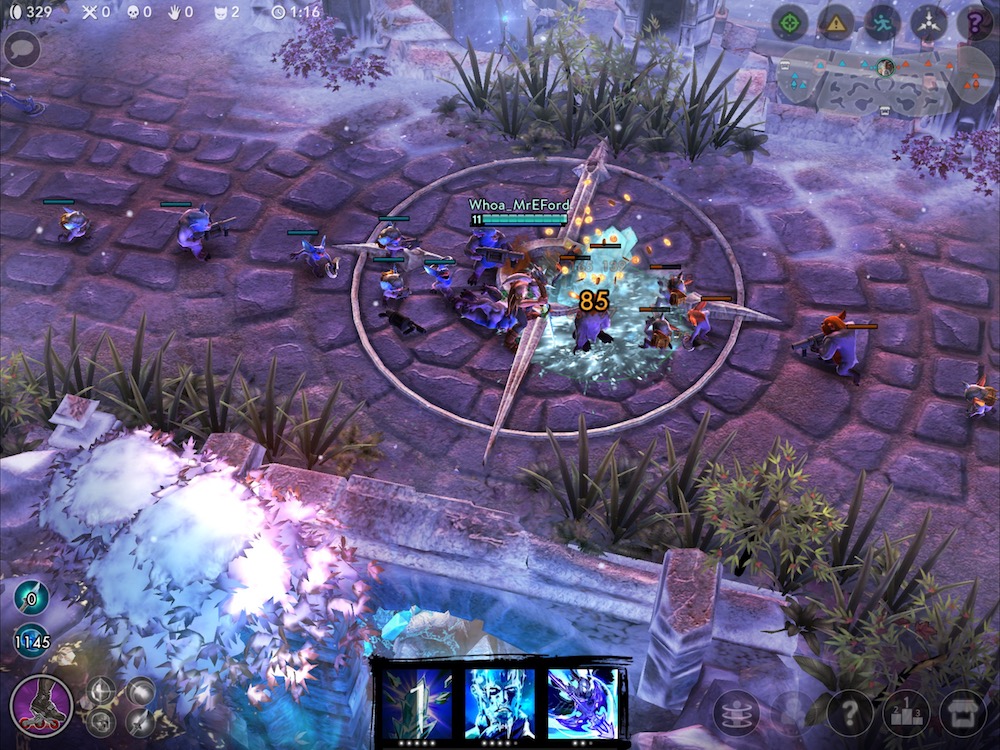 Moving on to abilities, his first ability, Winter Spire, is a ranged attack that shoots a spire of ice towards a nearby location. The spire of ice is actually a two-pronged attack. The first phase causes damage when the spire materializes at the target location, dealing AoE crystal damage. After a brief delay, the spire shatters, dealing twice as much damage to enemies that are caught in the secondary blast. Enemies that are unfortunate enough to already be chilled when they encounter the Winter Spire will take increased damage against it. At its highest level, Winter Spire has a very low cooldown and can do some serious damage with a good crystal build. It also requires some effective targeting as you’ll really need to lead your enemies in order to really get the most out of a cast of Winter Spire.

Chill Winds is Reim’s second ability and is simply a self-AoE that does crystal damage to surrounding enemies. The twist is if the enemies are chilled, the enemies becoming rooted, which prevents them from moving. Note this is different from a stun as rooted enemies can still attack (and can still target and queue up moves). Its damage output is better than Winter Spire and when combined with the root it’s best used as a chase-down technique or even as a preventative measure for heroes attempting to flee. 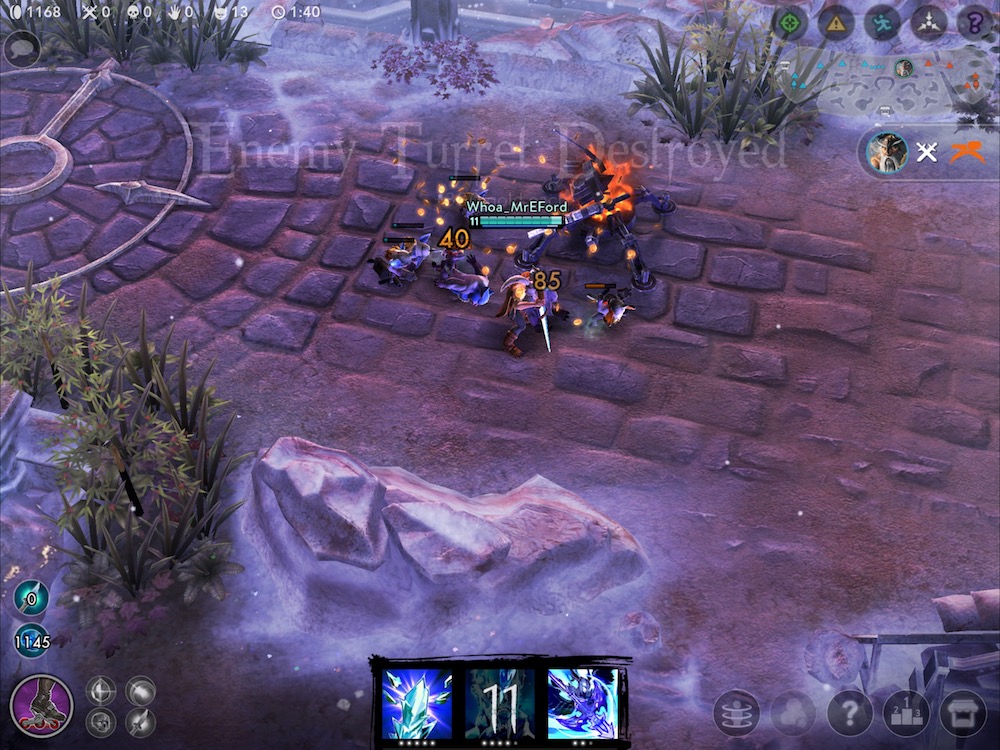 Reid’s ultimate, Valkyrie, is another ranged AoE that takes a few moments to cast. But once summoned, it causes massive damage, stuns all enemies, and also applies a slow. The interesting quirk about Valkyrie is that the damage and slow varies depending on where the enemies are. Enemies caught in the center take much higher damage and have a longer slow duration than those that are caught on the edge of the Valkyrie. Regardless, it’s an impressive ultimate that’s going to cause some damage to the opposition regardless of where they are.

In terms of equipment, due primarily to Frostguard, I highly recommend that Reim players stick with Crystal builds. This is for a similar reason to Celeste – when your heroic perk offers a de facto basic attack multiplier that is proportional to equipped Crystal power, you almost always have to take it. With that said, a basic Reim build is going to focus on energy, Crystal, and speed early on, with an Eve of Harvest as an Early Tier III item to complement the Fortified Health that Frostguard provides. In addition, Shatterglass lends itself well as a standard Tier III as well as Broken Myth due to the potential sustain that Reim has. Since he’s a melee attacker with the potential to root with Chill Winds, another common sense item is a Frostburn to provide perpetual slow effects for all attacks that will certainly complement Chill Wind’s ability to stop heroes in their tracks. Reim’s cooldowns aren’t too bad to begin but if you want to take advantage of having Valkyrie available sooner, a Clockwork is good to have (that and you’ll have so many Winter Spires up at any one time enemies won’t know what to do). 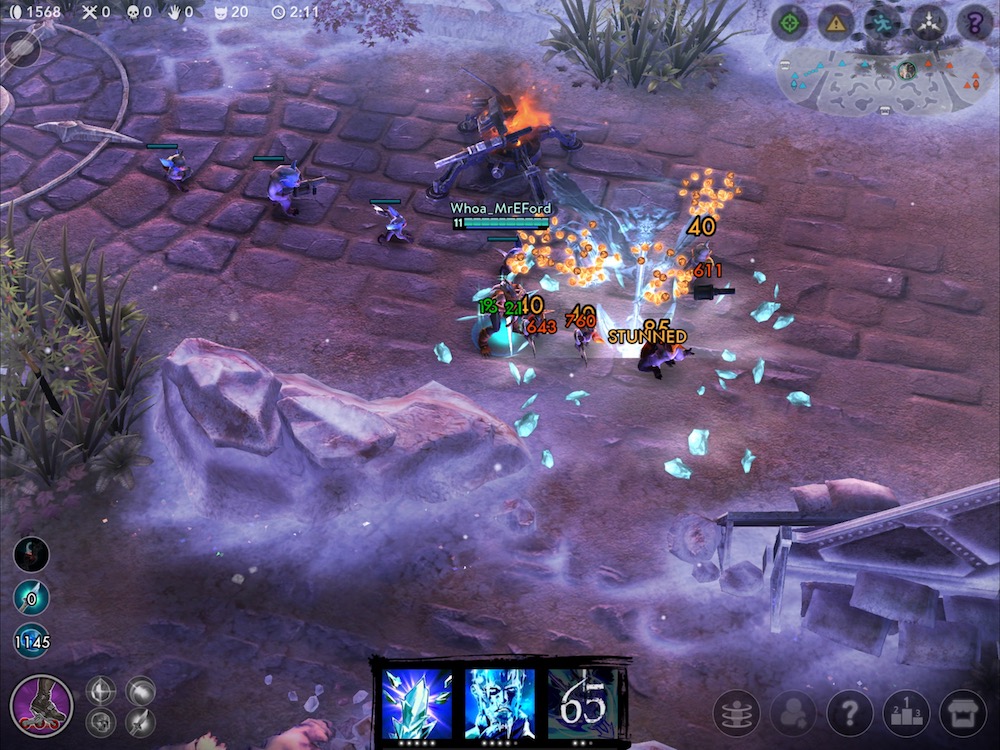 The above equipment list is a standard build, but if you want to get creative you can swap out an Alternating Current for the Clockwork to really augment the DPS on your basic attacks. Or, if you need some defense, you may want to swap a crucible with the Clockwork or or even a Broken Myth as typical that item is the first to go depending on how the opposition is building. Meanwhile, the rest of the items are fairly consistent with most of the current builds for Reim.

Well, now that you have an idea of his abilities and a general grasp of some item builds, how should you play him? Well, he’s primarily being recommended as a jungle player although it’s possible for him to play as a roamer as well due to the fortified health obtained through Frostguard. As a jungler, Frostguard allows him to initiate with Winter Spire being used to direct traffic and cause damage while Chill Winds can root any enemies trying to escape from a battle. If you’re looking to truly engage, start out with Winter Spire. If you land Winter Spire, use a Chill Winds to root and if that takes hold then time a Valkyrie to cause maximum damage with as many heroes in the center of the targeting box as possible. It’s also important to keep doing damage to keep the fortified health generating. This is an interesting lesson to keep in mind because a lot of Reim’s sustain is based on damage and for someone like me who is a Celeste player, it’s hard for me to remember this and Reim ends being far more squishier than he needs to be.

If you’re fighting against a Reim, stick and move, cause damage from afar if you can, and just try to avoid being chilled or double hit with Winter Spire. Also try to think one step ahead of Reim as he’ll try and use Winter Spire to herd you into other enemy heroes if he’s smart.

If you’re interested in checking out Reim, well he’s now available for for purchase with good ol’ Glory so get out there and earn enough to purchase him. Otherwise, stick with us for any future Vainglory news.