If a buffalo dances in space, does it make a sound?

Well, no. Space is a vacuum, an environment sound waves generally don’t do well in.

Nevertheless, we can’t ignore the philosophical significance of an even-toed ungulate running free amongst the stars. That’s why Namaste Space Buffalo (Free) by Goodnight Games is worth a look. It’s a timing game that gets pretty hairy at times, but all the rainbows undulating in the background forbid you from getting too angry about your seventh failure on a single level.

Namaste Space Buffalo chronicles the other-worldly travels of a space-buffalo — a “spuffalo," if you will — who’s in search of whatever enlightenment he can find in the heavens. You aid in his study by tapping him at the appropriate time, thus setting him on his path. 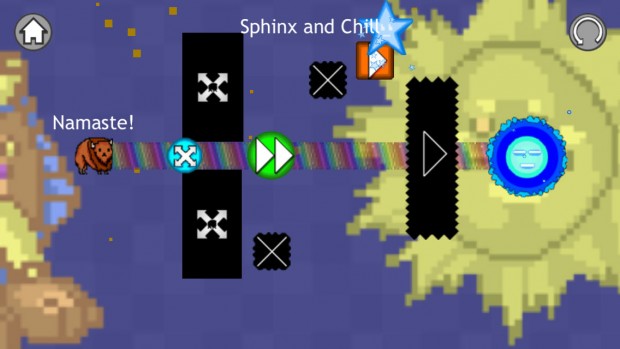 Sounds easy enough, but the road to spiritual ascension is a rough one. Each level offers myriad hazards, including locked walls, narrow passageways, and spinning black things capable of turning clumsy spuffalos into hamburger.

Of course, for every hazard, there’s a work-around. There are tracks that accelerate our spuffalo’s walking speed, portals that whisk him here and there, bumpers that send him careening backwards, and even items that shrink him down and allow him to pass through narrow alleys unhindered.

There are also eye-catching backgrounds that consist of mega-rasterized JPGs, but those are just meant to distract you. Focus, young padawan. Be not deterred by the image of the wizard in his hot-pink van. 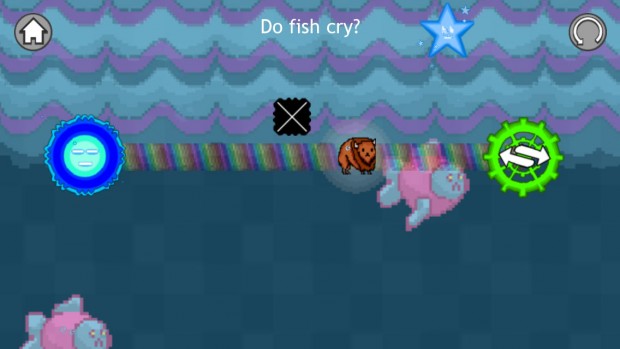 Once Spuffy starts walking, he can’t stop unless he hits an object specifically engineered to halt his progress. That’s probably meant to be another metaphor. Either way, succeeding in most of the game’s levels requires you to time the space cow’s departure just right so that he avoids hazards while also triggering certain keys. For instance, dodging spinning black beams won’t do you much good if you don’t also manage to trigger the moving button that opens the gate blocking the exit portal.

To make things even more difficult, each stage lets you collect an optional star. You tap on the star to trigger its slow descent. If your journey down the level’s path is too slow or too fast, you miss out on your chance to claim your own tiny piece of the heavens.

Obviously, Namaste Space Buffalo relies a lot on “lol random" humor that’s dripping with memes. Terms like “bruh" and “[object] and chill" are everywhere. You can even retweet, uh, inspirational quotes in between levels (“Mayonnaise is just frosting for sandwiches" — technically not incorrect). 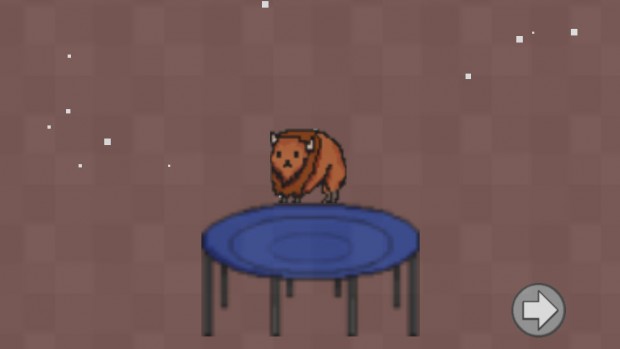 But an odd thing about Namaste Space Buffalo is that the whole experience meshes in a way that causes its annoying traits to become curiously charming. Some of the levels you’re thrown against are simply ridiculous challenge-wise, and the spuffalo’s ponderous pace can be irritating to sit through over and over.

Despite that, something about the game’s purposefully garish JPG backgrounds and silly quotes keeps you anchored to it. The spacey background music is compelling, and so is the spuffalo’s determined cry of “Namaste!" whenever you restart a level. When you hear it, you think “Well shoot, if he‘s so zen about all this failure, I guess I can keep trying."

If timing games make you want to burn down a yoga studio, you might not get anything out of Namaste Space Buffalo despite its charm. But if you’re up for a challenge, go ahead and enroll in space-school.