When it comes to modern games trying to pay tribute to retro classics, nailing the balance between making a fun modern game and an appropriate homage is really tough. It can be done – Shovel Knight on console and PC is a fantastic example of how to pay tribute to Mega Man, Castlevania, and the like. And we look at Horizon Chase (Free) on mobile, which did an amazing job at balancing out the feel of retro racing games while not being as clunky, frustrating, and unfair as many of those games were. There’s a balance to be had. Venture Kid ($4.99) from FDG Entertainment clearly wants to pay tribute to Mega Man in everything it’s about, and in doing so, it’s kind of a solid platformer, but it mostly just misses the point of what made the game it’s paying tribute to so great. 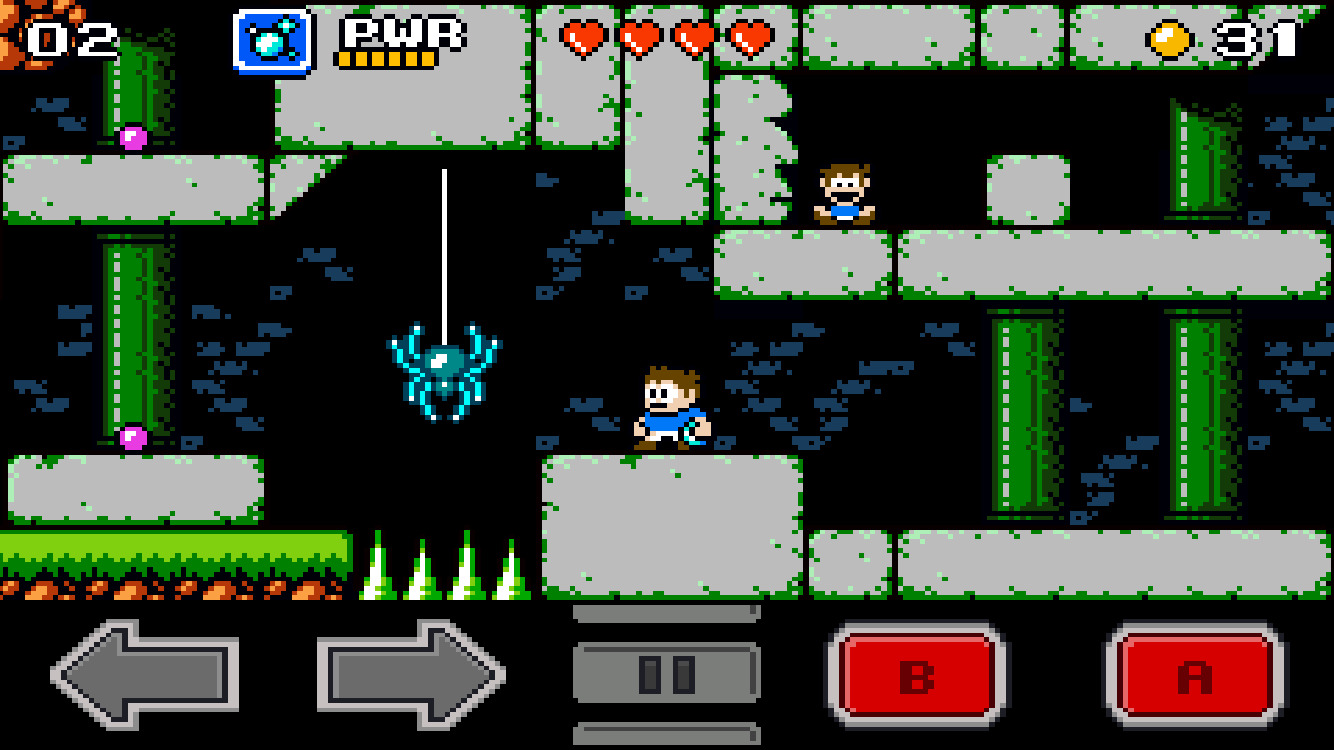 I love pixel art, and Venture Kid does a great job at nailing the Mega Man look. But it winds up in practice feeling more like a generic game than trying to break any new stylistic ground. There’s nothing memorable about the characters or bosses. The main character, Andy, is just some dude. The environments are just forest, ice, Egyptian environments. I can barely remember any of the bosses, that’s how uninspiring they are. The pixel art is nice and appealing in general, but look nice is all it really does.

Venture Kid perplexingly decides to chunk out one of the coolest parts of Mega Man: the nonlinearity and relationships between weapons and bosses. Venture Kid is linear and gives you a new weapon or tool every time you defeat a boss, but it’s not like the weapon is essential to defeat the boss or even make it through the next level. It just kind of helps. It feels like it’s halfway between the Mega Man model of “you need this weapon to defeat every single boss" and the Zelda model of “this tool you get you will immediately need to continue on your adventure." Instead, defeating air enemies is suddenly a bit easier when you get the rocket. 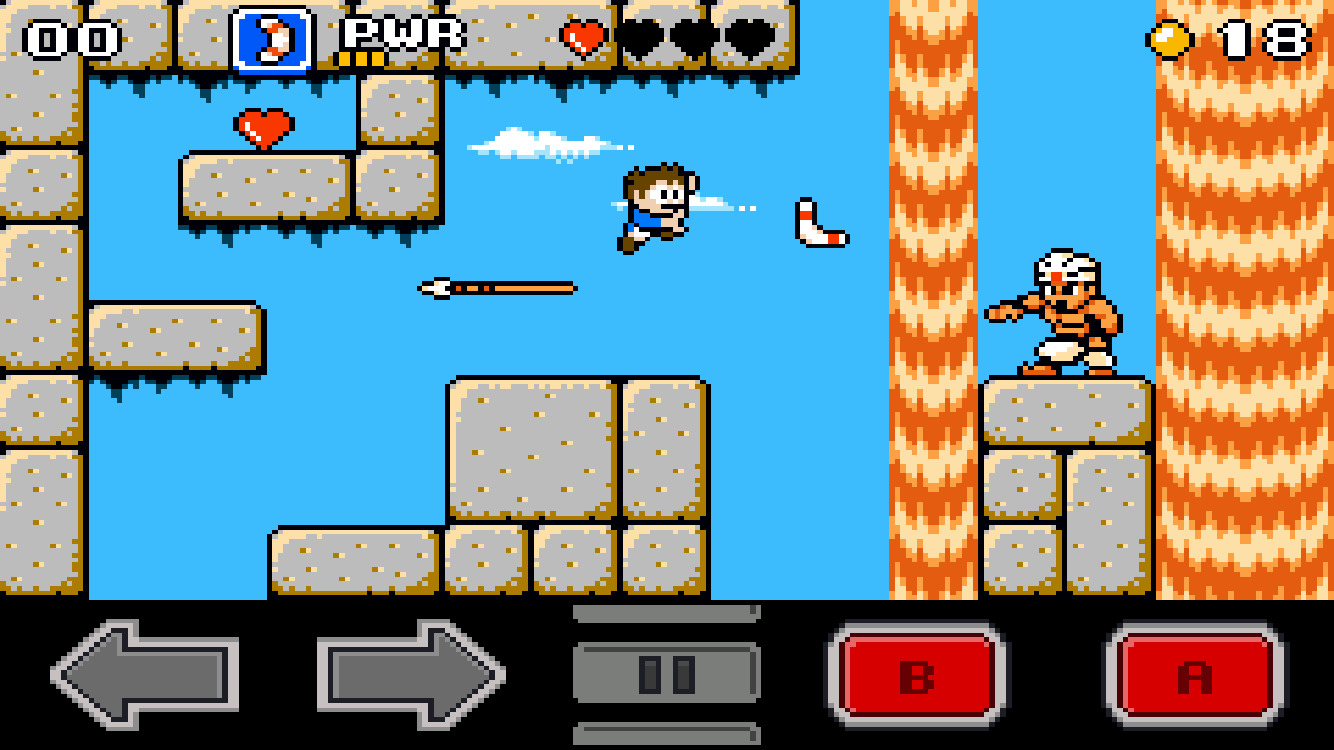 This is the problem with the game: it’s fine to toss out elements. Even Shovel Knight tossed out the entire nonlinearity of Mega Man and gave you just a few different choices in how to progress. But that’s a byproduct of smart design. Venture Kid feels a lot more like it’s just changing things without necessarily worrying about the impact that they’re going to have.

I’m slagging a lot on Venture Kid, and honestly, I have a lot of problems with it, but at the core of it, ripping off Mega Man isn’t necessarily the worst thing. Mega Man‘s still fun, after all. And Venture Kid goes a step farther in feeling a lot more smooth to play, and more forgiving than the classics do. It’s still got its frustration and annoyances, some born of classic rules and some of modern changes. But at worst, it feels like a decent enough platformer and it gets enough right to be an okay experience. 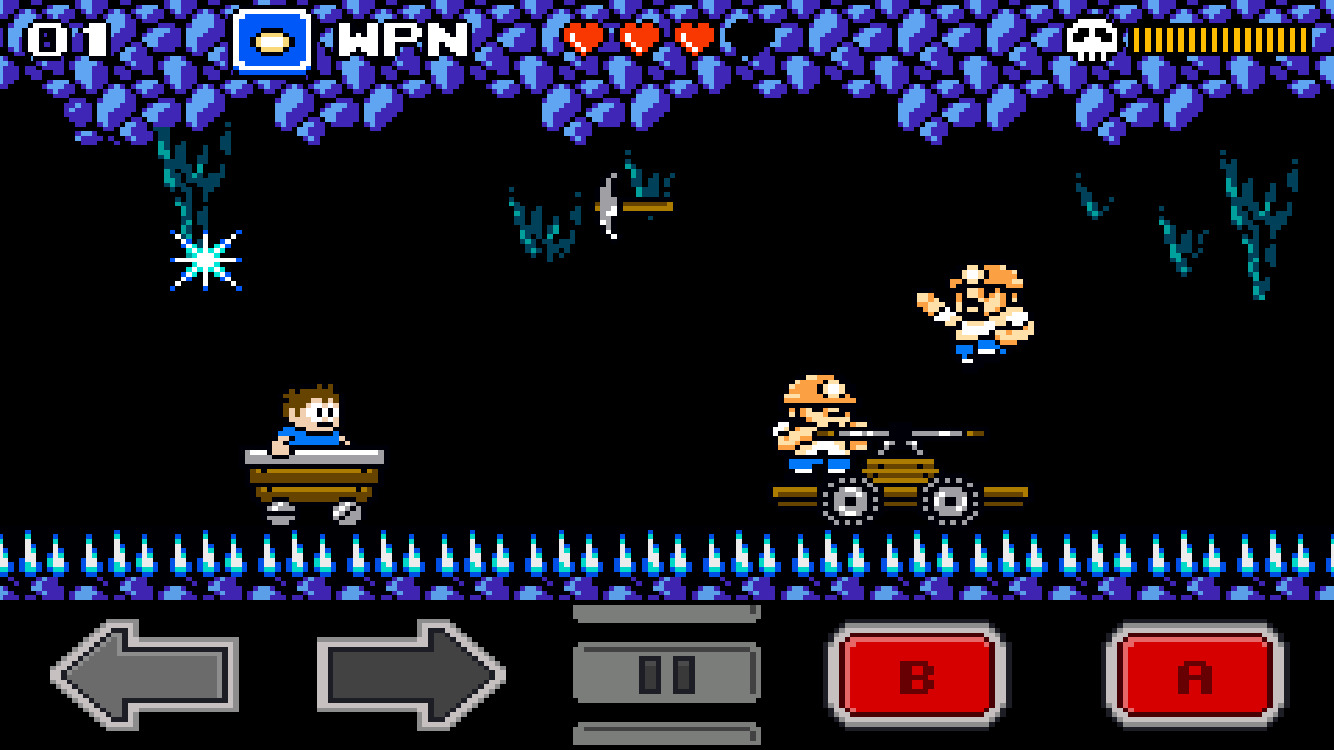 The touch controls work well for movement and jumping, with weapon switching set to the top parts of the screen used to switch between them. It doesn’t explain how the system works, and I thought initially just tapping the icon would work. It’d be nice if there was more explanation, but you do have options here. You can pause and switch weapons, but that involves pausing the game and interrupting your experience, of course. You can switch weapons from the shoulder buttons on an MFi controller, of course. I do wish Venture Kid supported the Apple TV, as the latency that comes from AirPlay or even the HDMI adapter is a problem for a game that requires twitch reactions like this.

Venture Kid is $0.99 with IAP: the orbs you earn in game can be bought. There are some permanent upgrades that you can buy with orbs, but if you save up over time, or buy the $5.99 orb doubler, you can get them pretty quickly. Still, you might have a disadvantage over having less health or the weapon balancer for a shorter amount of time. And the weapon balancer, where ammo you pick up automatically goes to weapons that need it, feels like it shouldn’t necessarily be a thing that you have to buy. But, this is 2016, I suppose, and the mass market won’t pay a lot for games up front, so that’s the reality. Other games can and have been far worse.

Venture Kid is unquestionably a decent game, a platformer that’s entertaining enough if you were curious about it. There are far better retro tributes and original platformers, and Venture Kid never really gets past the “Hey, remember Mega Man" stage of being a good platformer. It’s kind of entertaining, but unspectacular.