Let’s talk about upgrades. It’s pretty common in free-to-play games for the difficulty to ramp up and up, and the only way to progress is to spend whatever currencies and upgrade your cards, characters, weapons, clothes, eating utensils, or whatever else is supposed to make you “better”. When it’s done badly it can turn into a dreaded Pay Wall, but there are plenty of fair examples, too. This system works fine in RPGs, shooters, match-three games, and the like. In games that require pure strategy, however, the model starts to feel kind of weird.

Take Nival’s Defenders 2 (Free), for instance. It’s a tower defense game, and like most games in that genre (including its predecessor Defenders (Free)) you’ve got to carefully consider the placement of every tower and spend your cash wisely to efficiently take out as many creeps as possible without getting overrun. The free-to-play model, however, is full of upgrades and card fusing and all kinds of free-to-play junk that starts to blur the line between strategy and currency-spending. Did I fail that level because I put things in non-optimal positions, or because my cards suck and I need to evolve them up? 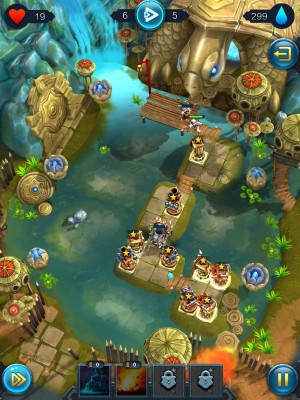 Sure, there are permanent upgrades (as opposed to in-game tower upgrades, which has long been an integral part of the TD formula) in everything from the Kingdom Rush (Free) series to Sentinel ($0.99) series–including Digfender (Free), a recent TD game I loved. But those games have a pretty clear end goal, with a limited amount of levels and upgrades to complete. Defenders 2, on the other hand, is set up more like a regular free-to-play game with a winding board of potentially endless levels (a la Candy Crush (Free) and a million others), and an extensive upgrade system that seems to go on forever that includes card collecting, runes, fusing, evolving, and more (a la Puzzle & Dragons (Free) and a billion others).

It may not seem like a big difference, but let’s consider Digfender for a second (since it’s the last tower defense game I played heavily). I collected enough stars and skulls in that game to permanently upgrade every single ability and tower, and I still had trouble finishing the last few levels. It clearly requires a great deal of strategy and thought, and that’s part of what makes tower defense games so satisfying. When playing Defenders 2, on the other hand, I have a nagging sense that it doesn’t matter if I fail a level. I can just grind more currency and cards and pass it later. There’s very little incentive to come up with a good strategy when you can essentially brute force your way through if you have enough time on your hands (or a loose enough bank account). 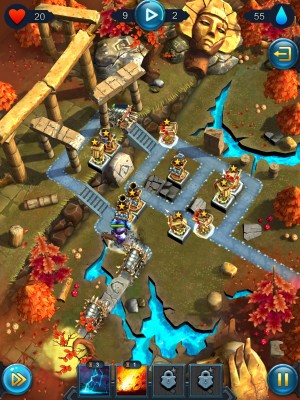 All of that being said, I don’t necessarily think the game is bad. I actually quite enjoyed my time with it! I was just struck by the fact that something about the free-to-play systems in the game made it feel… different, somehow. It changed the way I usually play and think about TD games, and I’m not sure if it was for the better. Fortunately, the rest of the game is much easier to wrap my head around.

Graphically, Defenders 2 looks quite good. It has a pretty standard fantasy theme with monsters and swords and all that stuff, all displayed in 3D with a solid framerate throughout. It’s not the best looking game I’ve played on my iPad, but it’s certainly not the worst. My only real complaint is that it doesn’t have much character or personality, and I probably wouldn’t be able to pick the graphics out of a lineup of other fantasy games. Still, it gets the job done.

As far as the actual gameplay is concerned, it’s not wildly different from any other TD game you’ve played. Creeps go from one side of the level to the other in waves (which you can call in early if you’re feeling cocky), and there are fixed points around the environment where you can place towers. The only areas I can think of where the game strays from a generic TD game is in the fact that creeps can sometimes double back after stealing some of your precious orbs, which incoming creeps can then pick up after the former carrier is taken out. I’m almost positive I’ve seen that same mechanic in other games, but it’s not something I’ve seen a ton and does make the game feel a tiny bit fresher. Also, you’ve got a limited number of each tower that you can place, so you can’t just spam your favorite when you have the dough. (Of course, you can always upgrade your cards to raise that limit.)

I’m a little conflicted about Defenders 2, if you couldn’t tell. On the one hand, putting a Puzzle & Dragons style collecting/evolving system in a tower defense game is kind of cool and definitely leads to a fairly unique experience. On the other hand, it also makes the game feel considerably less strategic since in the back of your mind you know you can probably win any level if you collect the right cards and upgrade them enough. The actual game under the free-to-play system isn’t nearly as interesting, though, but that doesn’t mean it’s not fun. It’s plenty fun. But there are better options out there (like Digfender, again, which is also free) that are even more fun, and don’t elicit quite as many conflicting feelings.