There are a lot of roguelike games on iOS, but that’s going with the more modern definition of the genre. In the years between the earliest days when roguelikes were pretty easy to get into and their recent explosion in popularity correlated with more approachable or hybridized designs, the roguelike was something a lot more complex. It was like a secret club for the most obsessed type of gamer, offering virtually limitless possibilities and options for those who were willing to do a lot more learning than the average game demanded. That particular brand of roguelike is far more rare on iOS, and it’s not hard to see why. A touch interface is a poor substitute for a full keyboard, and games of that sort of complexity are probably not what the majority of mobile gamers are looking for. At the very least, compromises have to be made on the granular nature of the player’s actions, because the alternatives are having a keyboard’s worth of buttons on the screen or using the software keyboard, and what kind of loon would do either of those?

Cataclysm: Dark Days Ahead (Free) is a completely uncompromising port of the open source PC game of the same name, a 2013 release that forked off of an abandoned 2010 roguelike called Cataclysm. It’s an open world, post-apocalyptic take on the roguelike concept, basically Angband meets Fallout. You create your character down the finest details and are then dropped into an empty shelter in the middle of a town without much more than the clothes on your back and a knife in your pocket. There’s no greater goal in the game beyond simply surviving, a task which you’ll find incredibly difficult initially. You’ll have to leave the shelter to find fellow survivors, food, materials, and other things, but if you venture too far unprepared, you’ll almost certainly run into something that will kill you. You’ll need to find a few useful things first, but more likely, you’ll have to make what you need. For example, using your pocket knife versus a zombie doesn’t sound like fun, but smash some benches and you’ll have lots of wood and nails to make the slightly more effective board-with-a-nail. 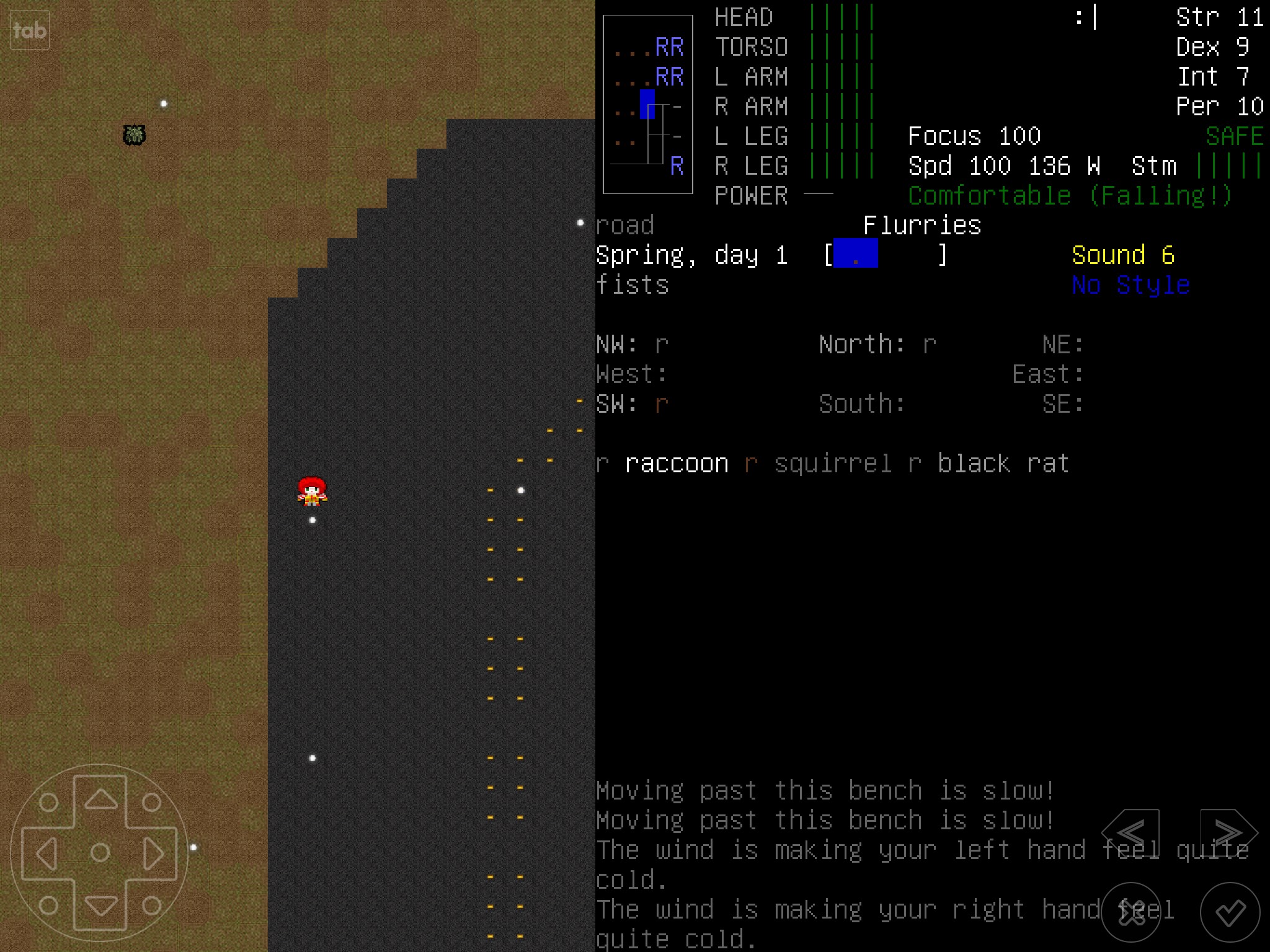 The level of detail in the game’s mechanics is incredible. In fact, if you’ve not played a game like this before, it’s likely to be overwhelming. You can break almost everything down and use the components to make new things, but you have to build your skill to make more complex things. When carrying things, you have to consider how big the object is and if you have any pockets or bags big enough to put them in. You’ll also need to be careful about overloading weight on one part of your body, lest you become unbalanced. Do you want to know the time? You’ll have to find or make a watch yourself. Or just watch the sun, I suppose. Pay close attention to the weather, too, because until you have a means of keeping your temperature regulated, heading outside into the extremes can be fatal. Oh, I see you thinking already that you can just light a fire in your shelter to stay warm. Well, you can, but it’s just as likely you’ll burn the place down with yourself inside. And make sure you think about ventilation when you light that fire, or you’ll die of asphyxiation from the smoke. Naturally, you’ll want to fortify your home with defenses and traps against zombies, and it can’t hurt to try to find or build a means of getting around more quickly than you can by walking.

The iOS version has not been simplified in any meaningful way. The full range of verbs are available and you’ll need to use the right one for each task. The list includes sleeping, crafting, picking up, looking around, using, butchering, chatting, eating, reading, committing suicide, wearing, and many more. After using some of the commands, you’ll even have to indicate a direction for the action. The game has on-screen buttons for moving around, confirming, canceling, and tabbing, but almost every other action will require you to use the software keyboard or, courtesy of the latest update, an actual Bluetooth keyboard. There are few gestures loaded in to make this as little of a headache as possible, but I can’t lie, this is a very awkward way to play an iOS game, and I wouldn’t blame anyone who didn’t want to deal with it. 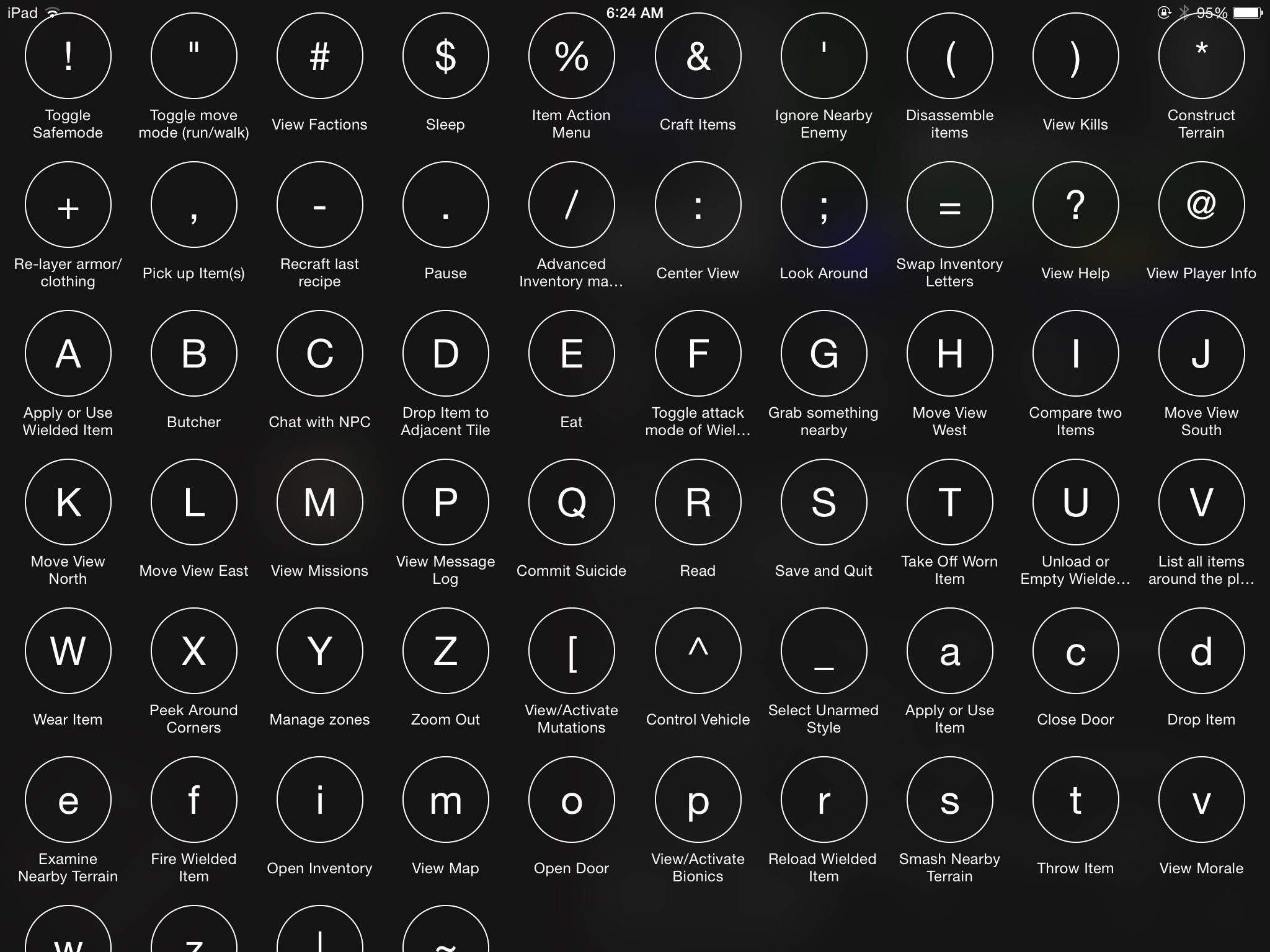 If you’re the sort of player who is willing to deal with any kind of interface issues for the sake of a great game, however, you’ll find just that in Cataclysm: Dark Days Ahead. There’s a massive learning curve here, such that I’d recommend parking yourself on a Wiki for a while and doing some reading before getting properly into the game, but once you’ve got a handle on it, nearly limitless adventures await. In fact, I’d go so far to say that this easily out-Fallouts most Fallout games when it comes to the mechanical possibilities and feeling of an actual game world. Like most roguelikes, death is permanent in Cataclysm, but you can roll another character for the same world if you want, so there’s a sense of permanence here that’s missing in a lot of other roguelikes. The crafting, construction, and defense elements are also a fairly rare sight in the genre, and they’re done very well here. And while the level of detail is going to be too much for many people, I have to appreciate a game where you choose to wear a trenchcoat and cargo pants because you can stuff more in your pockets than you can wearing jeans and a T-shirt.

This port also includes a number of mods that you can take or leave as you like, which is another thing you’ll probably want to read up on. Those mods are included for free, and there are no ads or anything like that, so the only way Cataclysm tries to monetize is through selling an optional IAP that gives you some extra sound effects. It’s a mere $0.99, and while those effects are neither here nor there, it’s a nice way to support the developer for their work in porting this over to iOS and hopefully keeping it updated in step with the PC version. The game even includes a bunch of tilesets for those who don’t want to try to play the whole game in ASCII, also at no additional cost. 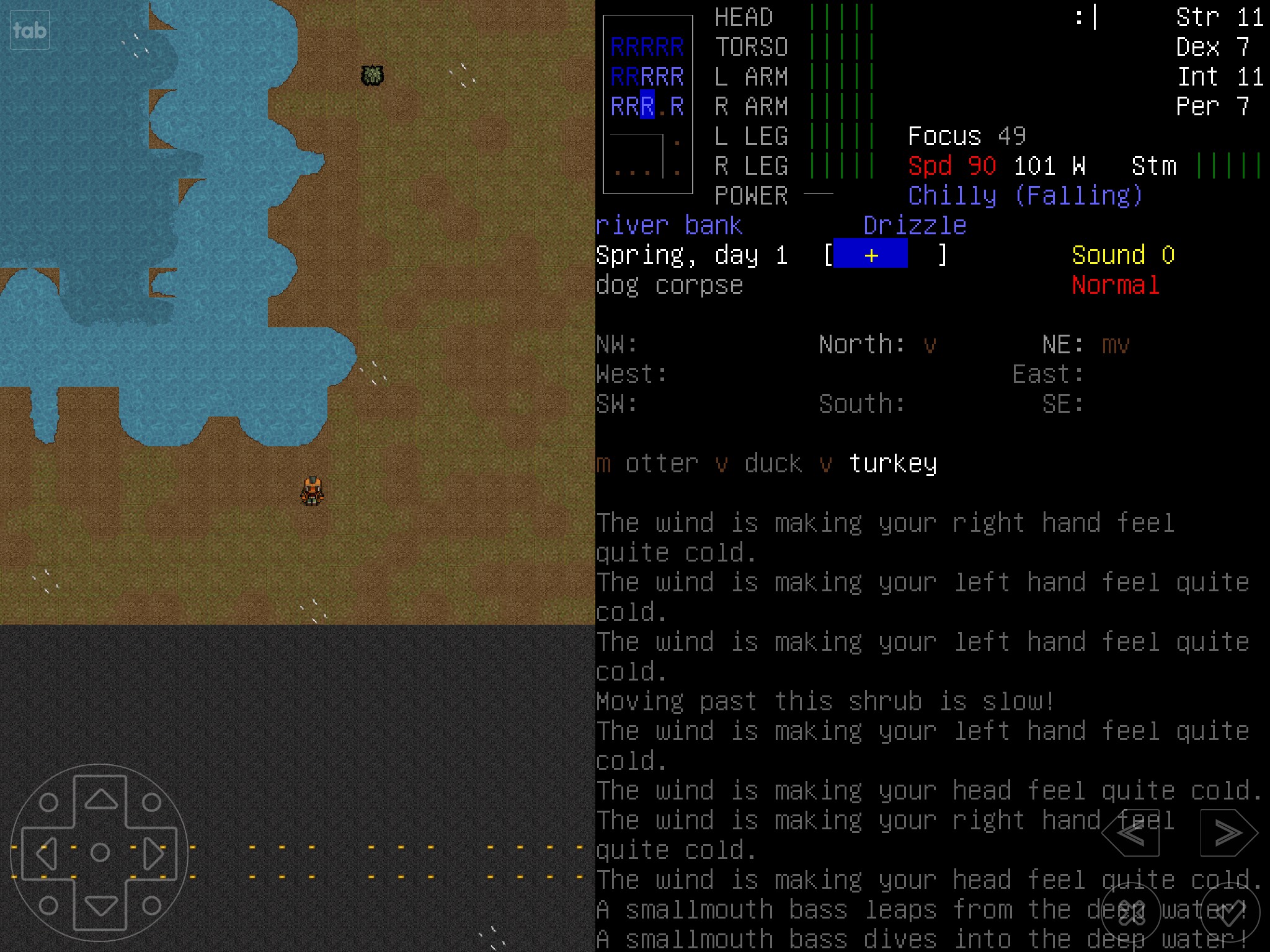 There are two major roadblocks in the way of enjoying Cataclysm: Dark Days Ahead. First, you need to come to grips with the user interface. I think the developer has done as good of a job as they could have without having to completely tear up the carpet on the game, but not everyone is going to be okay with having to access that software keyboard so often. Second, the game itself is so complex and deep that it requires a substantial time investment to learn how to even survive a couple of days without dying, let alone pull off more difficult tasks. If you’re willing to put in the time and patience, however, Cataclysm: Dark Days Ahead is among the best roguelikes currently available on the App Store. It’s something you could find yourself playing for literal months if not longer, and it doesn’t cost a thing. All of that is probably worth a little (okay, a lot) of discomfort with the control set-up.