With the advent of the new Rick and Morty game, Pocket Mortys(Free) , you might find yourself a little out of practice at being the very best there ever was at capturing and battling living beings against each other. No worries, however, I’ve rekindled my inner trainer and want to share with you some really nice little tips on how to maximize your fun through ruthlessly defeating all the other Ricks out there that are just pretending to be the best. Also, be sure to hit up our Pocket Mortys Thread on our forums to follow the discussion as it’s happening! 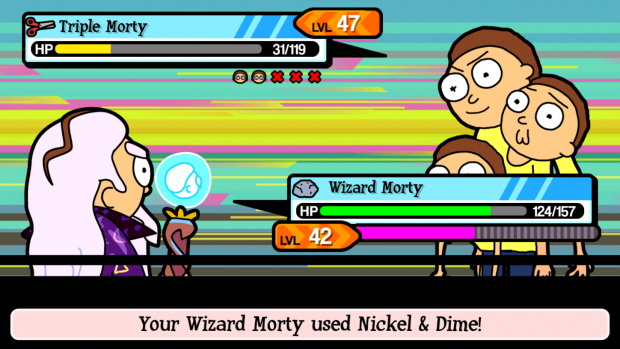 Even from the start there are a number of things you can do to put the beatdown on all the imposter Ricks out there. Until you have a full team of Mortys, your first priority should be to capture one Morty of each element. Buying Blips and Chitz tickets is a super fast way to fill out your group, but it isn’t really a necessity at all and more of a way to circumvent a little grinding. As you start off with an incomplete group you might find yourself running out of gas before completing a level. After defeating a few Morty trainers, taking a defeat is an easy way to reset your health. There is no downside to eating a defeat and it will allow you to focus on tracking down crafting materials rather than having to bee line for the level’s end boss.

As I mentioned in my review, Mind Control Chips are the best things you can craft to avoid dropping money on Blips and Chitz tickets. While the Junkie Monkeys site seems to be up and down lately, we’ve preserved the crafting chart they produced here: 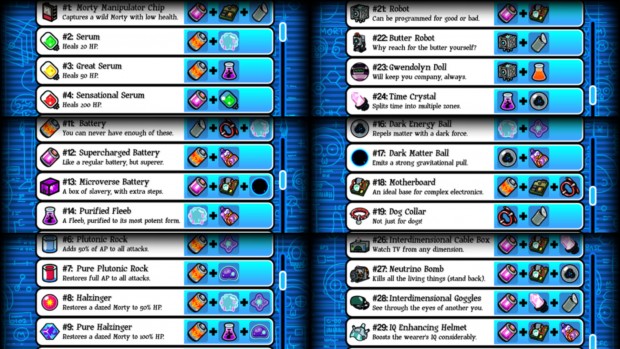 It is worth it to complete whatever random quests pop up for you as long as you have the crafting materials because you will get really useful items for completing each quest.

With enough Mind Control Chips, you’ll be able to fill out a group and hand pick your team. As long as you start utilizing Mortys that have elemental attacks you’ll quickly start to gain levels and beat level bosses and acquire badges to move the story of Pocket Mortys along. Members of the Council of Ricks are just slightly more difficult that normal Morty trainers and I’ve found that especially in these fights, it is a good idea to line up your Mortys in a way that your lead off Morty is supported by your single overlap Morty. You have 5 total slots in your team, one occupied by the original non-element Morty. 3 more slots ideally occupied by one Morty of each element, which leaves you with one left over slot. For the final slot, you should pick your strongest, most highly evolved Morty regardless of type. Your lead off Morty should be strong against the two Mortys in your team that have duplicate elements. The reason for that is that your lead-off Morty will inevitably have to swap out early sometimes in order to match elements correctly and the most important switch is to the element your current Morty is strong against. For example, my lead off is Wizard Morty, a rock type. The time he absolutely MUST swap out is when a paper Morty is the lead off for the other trainer, so I have two Psychokinetic Mortys who are scissors type that I can swap to. Even though my scissor Mortys will then most often have to take a round of damage before they can fight, I have two of them and can absorb more damage. If the lead off happens to be scissors I win with Wizard Morty and dont have to change, and a rock type I will still be able to defeat with my Wizard too or if my paper Morty is at full health I might opt to swap him in. This is probably the best way to keep the pressure off of the elements you dont have a duplicate of. 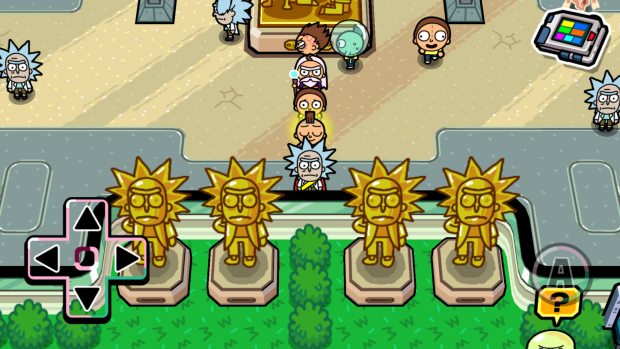 The other big thing that will just come with time is memorizing the element of each Morty. The developers have stated that a lot of the elements were derived thematically, like Mustache Morty needs a shave, so he is scissors element. Karate and Biker Mortys are tough so they are rock. The sandwich board Mortys obviously have a lot of paper to hand out but it only goes so far and they admitted that things spiraled out after a while and memory is going to play heavily in your ability to properly match your Morty fights.

Picking your skills as you level up is an important way to make sure your Morty isn’t chugging down Plutonic Rocks throughout a level. Buffs and debuffs are almost universally bad. Because most of your fights should last 2 or maybe 3 rounds total, damage boosts and debuffs, speed boosts and debuffs and any weaker accuracy debuffs are all pretty much a waste of time. You wont all of a sudden be doing double damage with a damage boost even though you sacrificed half of the expected combat length to cast it. Similarly trying to affect speed is pointless because you are intentionally forfitting a round just to go before someone else. Status effects are bad and really only strong accuracy debuffs are worth while. Getting one or two accuracy debuffs on a target that is much higher level than your Morty is a solid way to take down a tough target, but the use of that strategy is really only going to be applicable in small corner cases. For the most part you will want to have a single neutral element attack and the rest of your skills be elemental attacks. By loading up on attacks you can hold onto the strongest skills with the lowest maximum AP and still have enough attacks to last through multiple trainer battles. Always hold onto the highest base damage attacks and drop the lower ones to make room. 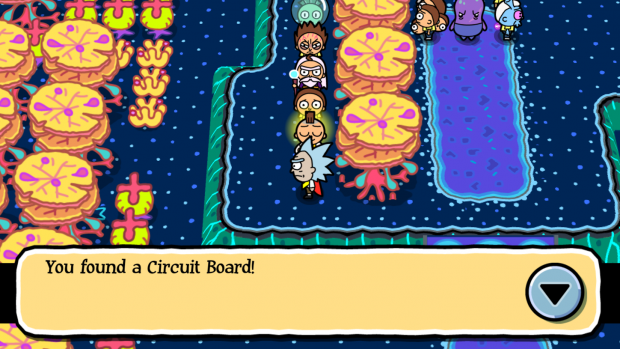 Once you’ve gathered a solid stable of Mortys, the best way to boost your team’s power is to evolve or hunt down some of the more rare Mortys. You will still want to keep a variety with your lead off Morty supported by your 5th Morty. There are a few super rare Mortys that are really strong, but for the purposes of beating the game, you probably won’t get much of a chance at finding them and levelling them up and are more of an end-game pursuit. You’ll be better off looking for the Mortys that have 3 separate evolutionary stages since they are usually quite prevalent in hunting areas and the top stages have great stat growth. Mortys of that type would be Wizard Morty, Psychokinetic Morty, Reverse Mermaid Morty, Skeleton Morty, Crazy Cat Morty, Multi Morty, Phantom Morty, Colossal Head Morty, Spork Morty, Exo-Prime Morty, Rainbow Shirt Morty, Pocket Mortys Morty, Hipster Morty, No Mercy Morty, Test x72 Morty, three Eye Morty, Ancient Morty, and Hobo Morty. Phew, thats a lot of Mortys, but as you hunt, these guys will all have top notch stats and will be well worth the time invested if you evolve up to them. Just like in Pokemon, their lower forms are all very thematically similar so you should be able to pick them out pretty easily if you want to evolve up to them, which carries the added benefit of a nice level boost.

Any Morty #68 or higher seems to have a solid stat growth, even though they have no evolution stages. So if you can’t seem to get a solid evolver, catching one of these slightly more rare Mortys is a good stop gap. This chart the first 72 Mortys from IGN is a pretty cool resource you can use to keep track of most of your Mortys: 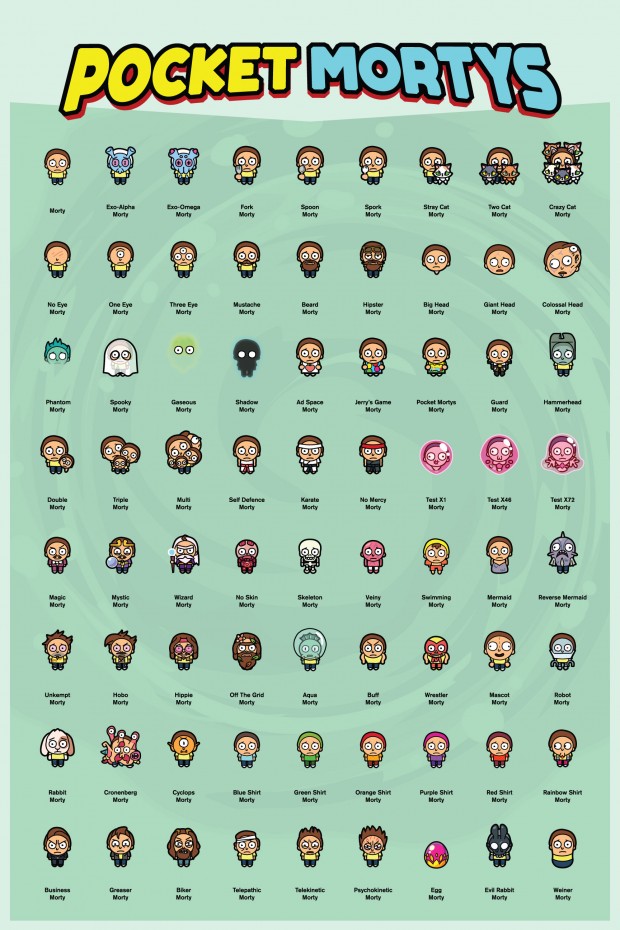 After building an unstoppable force of Mortys and defeating the last of the dastardly sub-standard Ricks, Hunting down those last few missing entries in your Morty Deck and completing quests with crafting items will probably be your main focus. Egg Morty hatches into The One True Morty at level 20, but you may not want to wait for him to become useful until after you complete the game. His stat growth is, expectedly, ridiculously high, but it takes a long time for him to evolve and a long time after that to gain useful attack skills.

If you ever feel the need to amass Schmeckles, the best time is after clearing the story mode portion of the game since fights in the portal will continue to scale up in level and reward. Soon after clearing the game, you’ll be making quite a bit more per fight than you would make by watching video ads in the store. 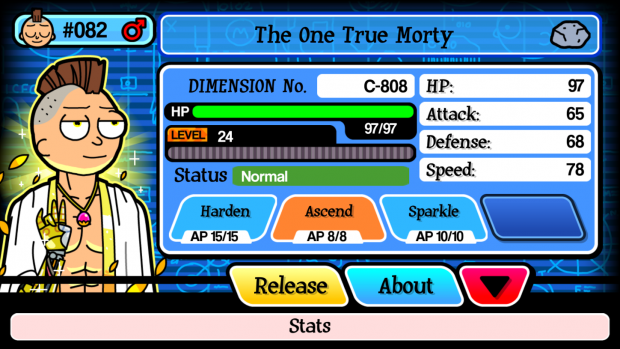 There are still a few mysteries out there and I don’t think anyone has figured out what the IQ enhancing Helmet is for yet. My hope is that this game gets updated soon with even more content and I am crossing my fingers for some sort of multi-player, but for the time being, the game has loads of content that really doesn’t require in app purchases unless you want to fly through that initial grind.