Once upon a time, in the long-ago days before mankind knew how to wield fire, you could count the number of Kemco RPGs on the App Store on one hand. Among those early releases, one of the best games was Fantasy Chronicle ($3.99), among the first iOS releases from developer Hit-Point. Unlike their Kemco stablemate EXE-Create, Hit-Point isn’t too big on making sequels to their games, preferring to come up with something a little different each time. It’s a little surprising, then, to see Fantasy Chronicle get a sequel after several years. If Justice Chronicles ($7.99) is any indication, I think I’d like to see Hit-Point make sequels more often.

Justice Chronicle follows an almost entirely new cast of characters, though there’s at least one notable carry-over from the first game. The world is still divided into cultures that live above the ground and those who live below it, and there’s certainly no love lost between them. Our hero is a young soldier of the surface world named Kline who, while on a recon mission underground one day, gets separated from his unit and ends up in the care of a local tribe. Worse still, circumstances lead to him making a pact with an entity calling himself the God Of Death, who is willing to lend Kline power in exchange for his life force. Kline is your typical plucky JRPG hero, complete with a mysterious past and no living parents, while the God Of Death serves as his constant foil. 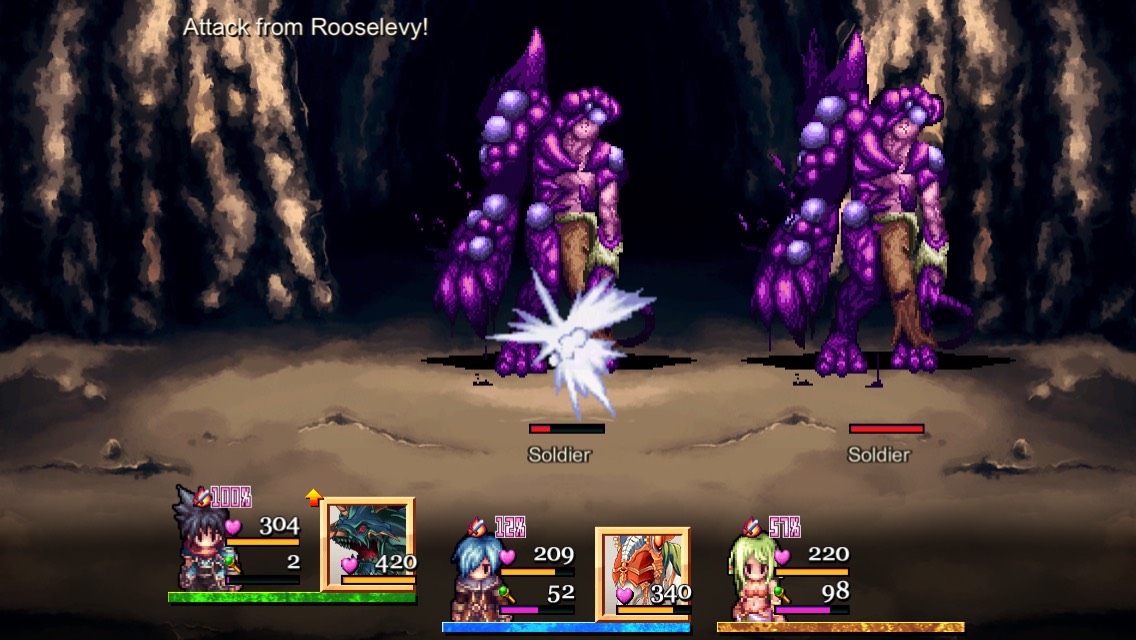 Joining Kline on his journey are an assortment of RPG character tropes. There’s Alia, a battle maiden who treats Kline in a hostile manner even as she falls for him, Vil, the mentor with ambiguous morals, Paola, an aggressive flirt who knows more than she lets on, and so forth. While the characters are templates and the localization does them no favors with its awkward phrasing, they’re a likable enough crew. They interact with each other well, and the presence of Guardian Beasts and High Beasts to flesh out the party gives everyone plenty of personalities to play off of. Rooselevy, the God Of Death, is like having Bowser Koopa in your pocket at all times, and while I wish the game had gotten a translation that made him shine like the star he’s trying to be, he’s still a really strong presence as-is. The bad guys are surprisingly vicious in this game, too, though I suppose that was also the case in the first game.

As for the gameplay mechanics, this really does feel like a proper sequel to Fantasy Chronicle. In some ways, it feels behind the curve compared to other modern Kemco games, but I’m actually happy that Hit-Point didn’t give up the identity of the first game completely the way that EXE-Create tends to do with its sequels. As in the first game, the overworld is represented by a map with points on it that you can enter and explore. The turn-based battles take place from a first-person view and involve cooperating with your teammates and your Guardian Beasts as effectively as possible. You can set a basic plan for how your Beast will behave in battle, but beyond that, they’ll do what they like. 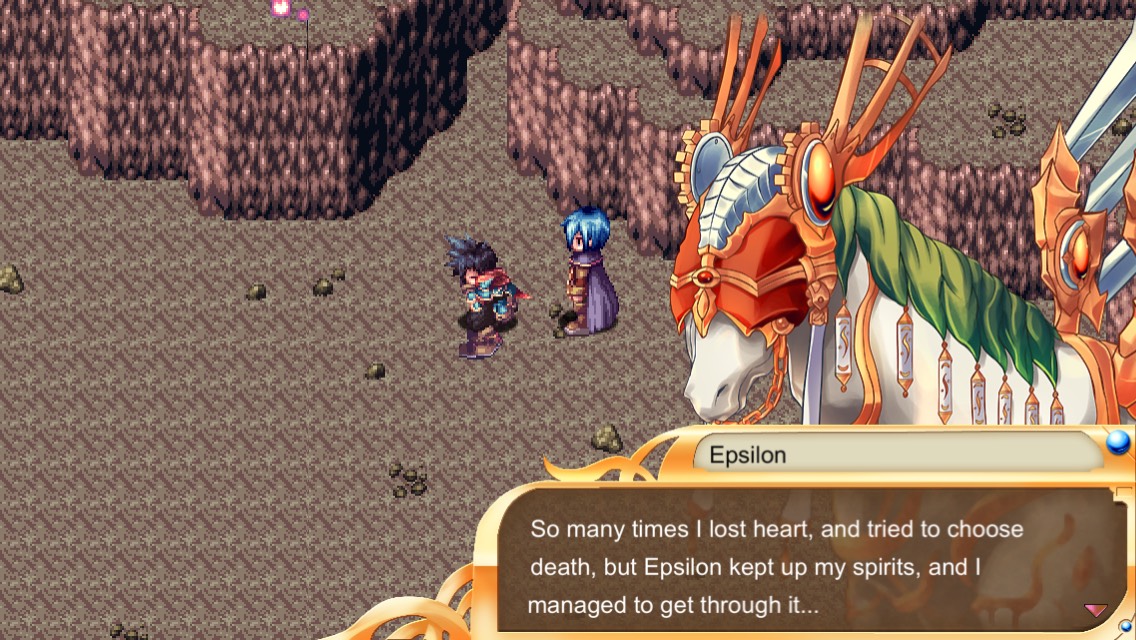 While equipping Beasts was the main way to give characters different magic and skills in the first game, Justice Chronicles does things a little differently. There are special items called Magic Meteorites that you can find or buy in shops that you can equip, granting characters the abilities associated with them. Use them long enough and you’ll unlock more powerful magic and skills, so yes, they’re pretty much like magicite or materia from Final Fantasy. Characters also come with their own built-in skills that they’ll learn as they reach certain levels, so they’re not strictly interchangeable. For the most part, the story will dictate who is in your party at any given time, so you’ll have to build characters to handle themselves in any combination if you want to play it safe.

The first Chronicle game put a heavy emphasis on picking up missions to clear in each area. That system is gone in Justice Chronicles in favor of a heavier narrative focus. This isn’t usually one of Hit-Point’s strengths, but they fare a little better here than they usually do. As ever, the stiff localization typical of Hit-Point’s games for Kemco hurts the game’s script badly. More’s the shame here because I think they actually had something decent to work with for once. While the mission-based structure has been jettisoned, the crafting elements seen in many of Hit-Point’s RPGs are here and in better shape than ever. You can now craft directly from your menu, and the new UI makes it easy to see where weapon improvements branch off and what possibilities are open to you. Collecting resources is done in the same manner as the original, by touching sparkling squares in dungeons. As before, improving your existing gear is generally better than trying to buy new stuff, and it’s a lot of fun to see what each piece can potentially become. 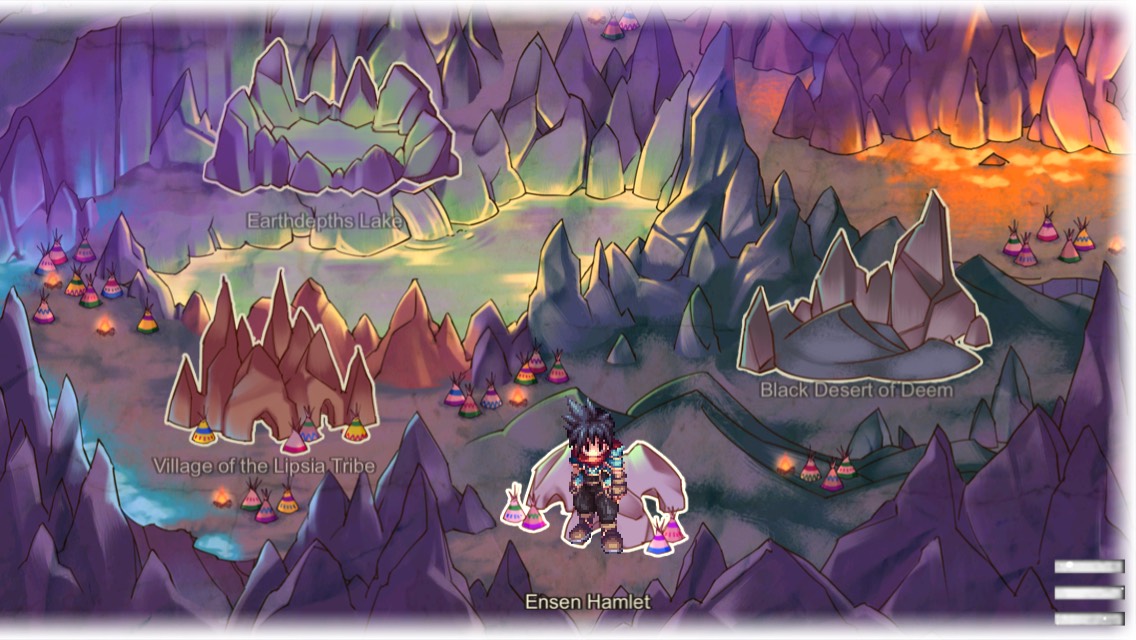 Naturally, the game looks a lot better than the original. The sprites used for the important characters in the plot are particularly nicely-drawn, though they’re a little animation-starved. The soundtrack only has a handful of songs, and while they’re decent enough for the most part, you’ll hear them so often that you’ll get tired of them quickly. The UI has improved considerably over the original game, but it still feels laggy overall and sometimes a little hard to use. The shop menus are especially bad. You have your choice of touch controls or virtual buttons, but I don’t feel like either of those setups work well on their own, so you’ll have to get used to switching between them as the situation calls for it. Like all Kemco-published RPGs from the last couple of years, there are IAPs in Justice Chronicles that allow you to purchase special points that you can exchange for cheat items in a special shop. You can earn the points through battles, and no content is locked behind any items, so it’s really just a way to get a leg up if you want it.

Justice Chronicles is a strong follow-up to the original game. It builds sensibly on the gameplay systems and the mythology of its world while still feeling like it’s cut from the same cloth. Of course, like the original, it’s not breaking the mold in any significant way. By trying to improve on the first game without necessarily paying attention to everything else that’s changed in the last several years, there are some aspects of Justice Chronicles that feel out of date, like the menu-based world map. But while Justice Chronicles may be preaching to the choir, it’s a rousing sermon, if nothing else.