The thing about visual novels is that it’s hard to know what to expect until you actually get into the game. You can look at screenshots, read the description, check the art, and so on, but visual novels live or die based on how well-written and engaging their stories and characters are, and that’s something you generally only discover by playing. True Lover’s Knot ($6.99) doesn’t seem bad from the screenshots, and the description makes it sound a little more interesting than your average romance game, even. The story takes place on a cruise filed with romantic possibilities, and there’s a match-3 game that you play here and there to break up the story a bit. The reality is that this game fails in almost every possible way a visual novel could. It’s so bad, I ended up laughing my way through the back half of its hour or so running time. Normally, we wouldn’t review something of this quality, but there’s a small possibility some of our readers might get some pleasure from my suffering, so that’s good enough for me. 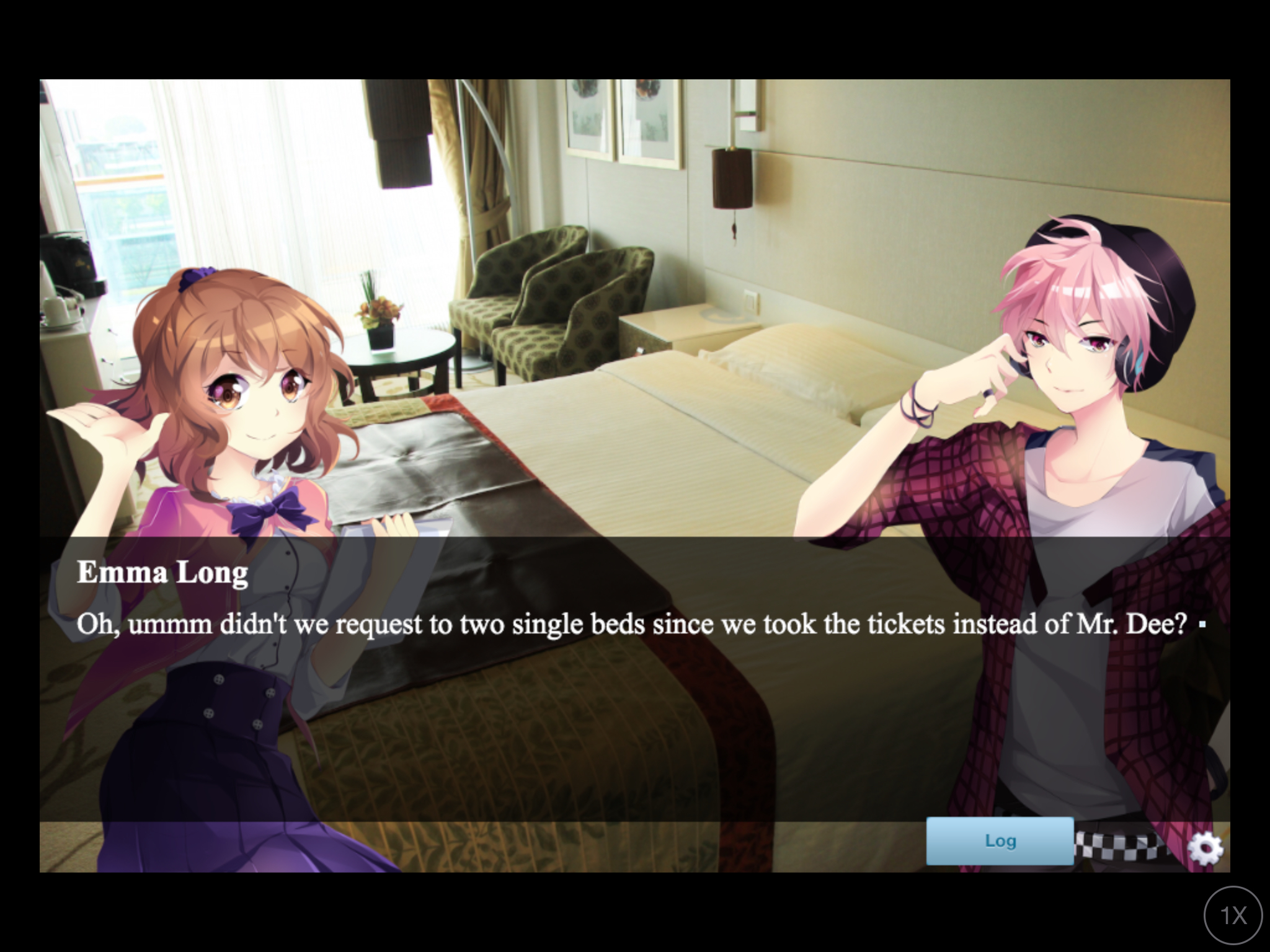 You play as Emma Long, a computer tech who is surprised by her co-worker one day at lunch when he offers her a ticket on board a cruise traveling down the coast of Spain. Naturally, there are a handful of characters to meet on that cruise, and if Emma plays her cards right, she’ll find love with one of them. Actually, she doesn’t even need to play her cards right. There are only four or five choices in the whole game, and no matter what you choose, you’ll still have the opportunity for all three of the game’s endings, which you’ll get simply by choosing one of three options on a menu at the end of the game. Counting Emma, there are exactly seven characters in the game who do anything at all, and only two of them are romantic options. The third choice is to go home alone, which is what I would do given the choice between these two goofballs.

The biggest problem, but not the only one, with this game is that the writing is atrocious. Characters serve as indistinct exposition dumps, except for one of the romance options who frequently shifts gears to be creepy as heck. There’s no flow to the text at all, and if you didn’t have the portraits to look at, it would be hard to guess who is saying what. It’s shockingly dull, and only breaks up the boring dialogue to make awkward forays into pop culture references or slang. And again, I can’t stress enough how creepy Santi comes off. Emma swoons over him no matter what you do, but I couldn’t imagine any human with a functioning brain falling for the lines he’s spewing. The other romantic choice, Scott, is slightly more appealing but still terrible. He’s an old ex of Emma’s, and virtually all of the reasons she left him are still valid. Not that Emma seems to care, mind you. None of this is enjoyable to read, and I only wish the mercy the game offered you in allowing you to skip the encyclopedia entries that it passes off as tours was given to you for the rest of the dialogues. 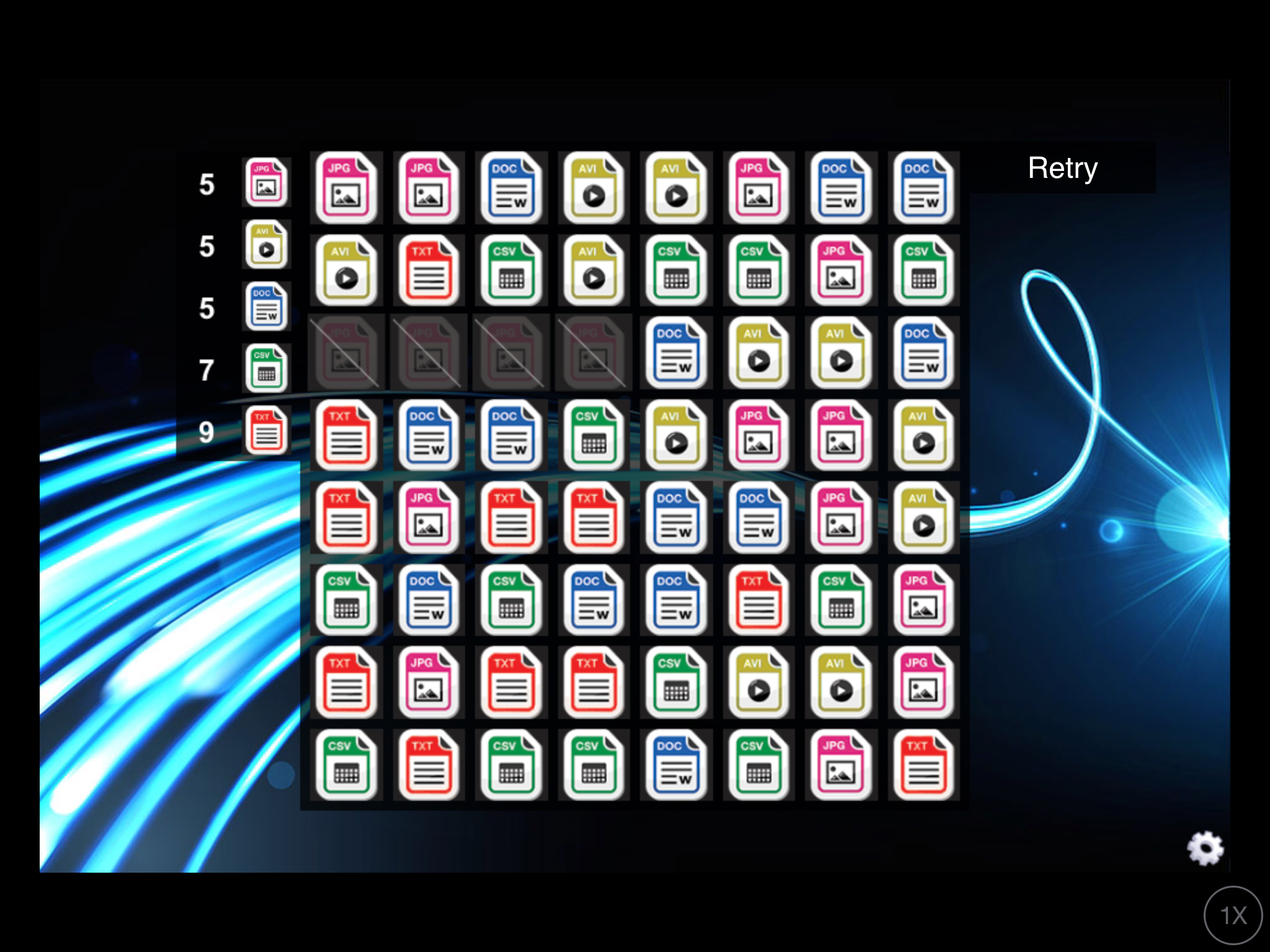 At least the pain doesn’t last long. This is a short story where almost nothing of importance happens to anyone. You talk to someone for a little while, time moves forward, you visit a location and hear some fun facts, time moves forward, you go back to the boat and talk to someone else. Everyone gets along perfectly well for the most part, so there’s no conflict at all except for Emma’s last-minute choice between Scott and Santi, and even there, the other guy is completely forgotten once you’ve cast your die. Up until that moment, the only problems that occur are mechanical ones. For whatever reason, Emma seems to have a bad luck aura around her for machines. Tablets break, engines break, mobile phones break, and nearly without fail, the game’s text handles these moments with a complete lack of grace. You’ll be talking about something else entirely and then, boom, something’s wrong with the warp drive or someone’s calculator and only Emma can fix it.

Being a skilled tech, Emma is a master at fixing almost anything mechanical, which she does by sorting colorful files in a half-cooked match-3 mini-game. While this is in theory a nice break from the banality of the game’s story, the clumsy plot justifications are only one of the issues here. It starts with an overly long, unskippable tutorial, because everyone needs a tutorial for how matching games work. Then you’ll likely notice how laggy the controls are in this mini-game. Which I suppose makes sense, because even advancing the text in the normal gameplay is laggy. You pretty much have to press and hold and then slide in the direction you want to move a piece. There’s almost no visual feedback for this, I should mention. The one interesting quirk is that making a match will take those pieces out of play permanently, potentially isolating other pieces you’ll need to solve the puzzle. You can reset if you run into a problem, but as long as you keep that restriction in mind, it’s unlikely you’ll ever fail. 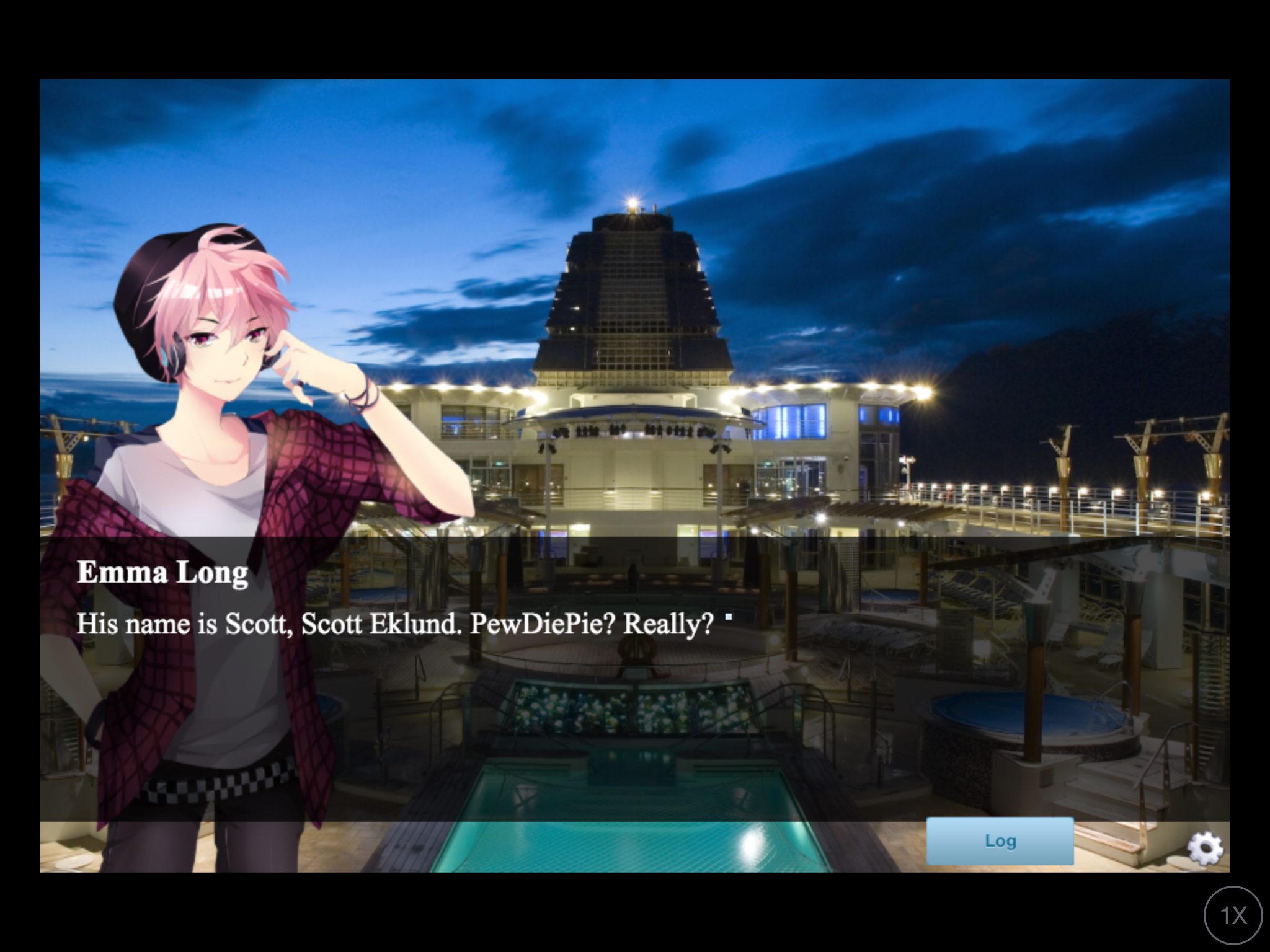 At the very least, you might expect the game could score passing grades with its presentation, but no, True Lover’s Knot is nothing if not thorough in its ambitions. Even setting aside the matching game, which I’m going to because it’s terrible, this game doesn’t measure up. Individual character portraits look fine, but as soon as more than one of them is on-screen, you’ll notice they don’t match up in scale. Even worse, the game uses real photos for backgrounds, which isn’t terrible except that some of these real photos have real people in them, which hilariously clashes with the anime style portraits. That’s not the only awkward use of real footage, however. Each day is divided into separate periods, and in between those periods, the game plays unskippable video footage of the boat casting off and sailing. There are a couple of other clips, including one showing a party at a nightclub with real people dancing. It uses that one twice. It will likely make you cringe both times. It uses the boat sailing ones a few times apiece, and believe me, you won’t even want to watch those the first time. They all feel longer than they should be, and you cannot skip them no matter how many times you’ve watched them before.

As for the audio, I can’t say a lot, because it doesn’t appear to be working correctly. Sometimes when I start the game, a little jazz music plays, but it always goes away after a short time, leaving the rest of the game in dead silence save the terrible videos, where you get a few sound effects and what sounds like someone banging away on a Casio keyboard. The game has two clips of voice acting, and I’m sure it’s no surprise at this point for me to tell you they’re awful. Scott, a half-English, half-Swede, sounds like he’s hiding a Scottish accent. His lines are awful but his reading is decent enough, so go Scott. On the other hand, Santi, a Spaniard, has what sounds like a fake accent. His lines are even worse, and his reading is stilted. Also, I think he might be Scott. It’s hard to tell through the bad accent. Well, at least it’s only for one scene. Rounding all of this out is an inoffensive song that plays over the ending credits. Nothing goes wrong here, except for some distortion that occasionally scrambles the top portion of the video, so I guess that’s something. 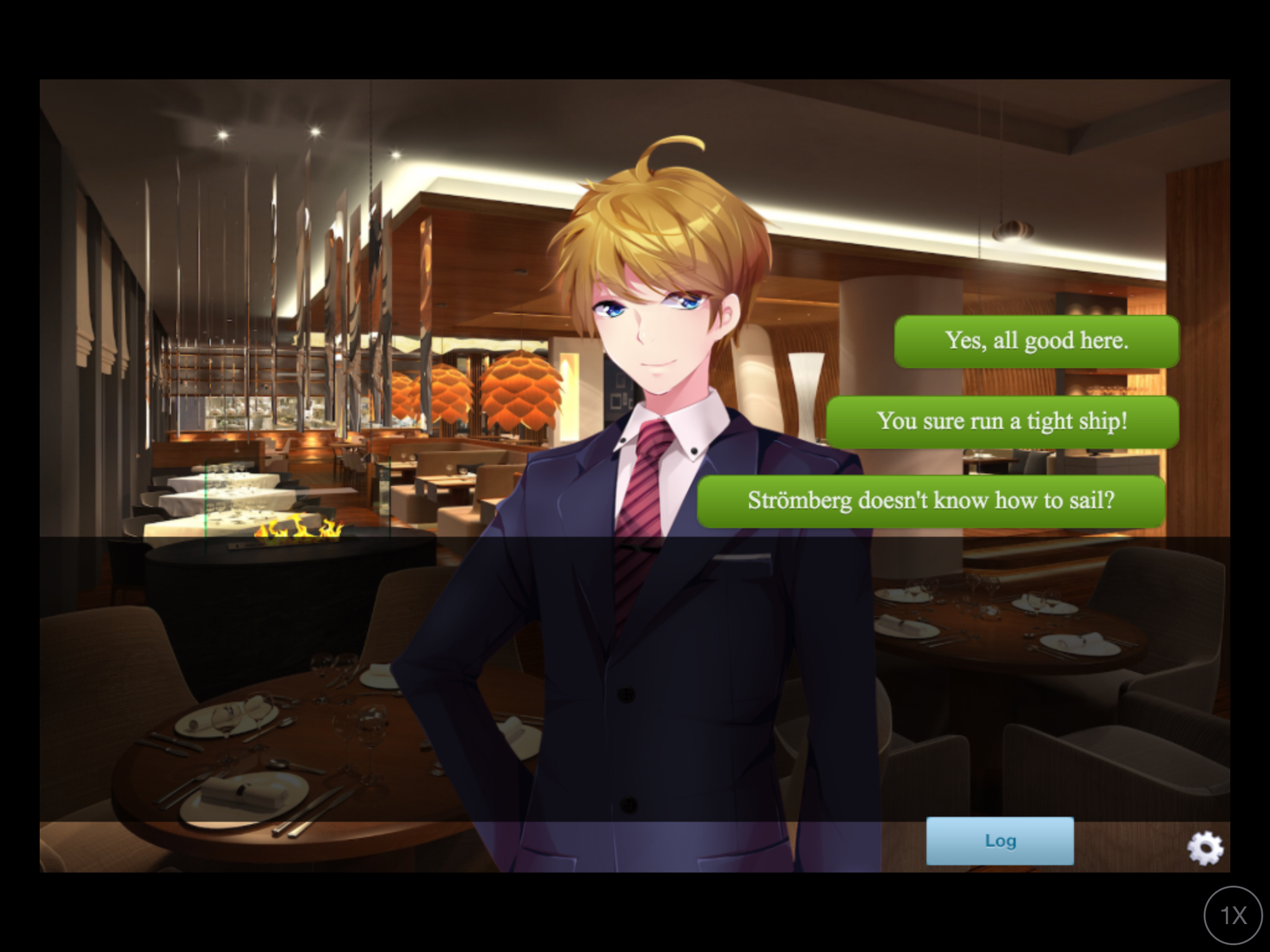 True Lover’s Knot is a special kind of bad. It’s so terrible all-around that it’s almost entertaining to experience, but I certainly wouldn’t recommend it at any price. The plot and characters suck, the writing is awful, and there are no meaningful choices to make. There are tons of technical problems, and even the presentation is a bust. Did I mention it’s not even a universal app? It’s good for an unintentional laugh and little else, and there are definitely better chuckles out there for your money even if that’s all you’re looking for.