When I went to the movie theater the other day to watch Star Wars: The Force Awakens, I was greeted by a Clash of Clans (Free)  commercial featuring a different type of warfare. Leaving aside the commercial’s content for a second, it still amazes me that a video game has such reach (and so much money, too). So, the commercial stars Christoph Waltz (of Django Unchained and Inglourious Basterds fame) and the award-winning British comedian James Corden. The two actors play out a slightly weird father-and-son scene where the father tells the son a bedtime story about, you guessed it, a Clash of Clans attack. The Legend of the Last Lava Pup, where the sole remaining lava pup takes down the enemy’s base, is a dramatization of the actual battle between attacker CamaroBro and defender Newgfarmer.

The video above shows the very well-made commercial and also moments from the actual battle at the end of it. Fun stuff, and another sign of just how much money Supercell has made. Besides the commercial, Supercell has also announced that from today up until January 7th, you can boost everything for just one gem. You only get to boost for 1/7th of the time you should be able to. Of course many on reddit immediately saw this as an attempt by Supercell to make players forget all the Town Hall 11 update issues, but others reminded them that these kinds of boosts have been happening every year. Well, go take advantage of those boosts if they work for you. 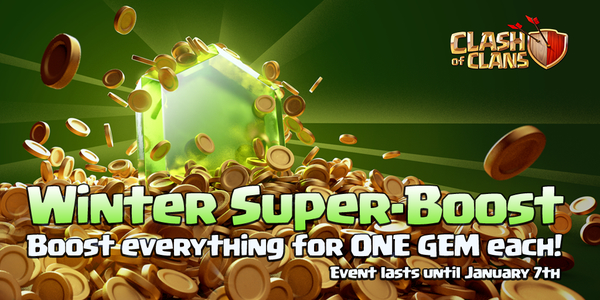