I’ve been a pretty big fan of all the recent heroes that have debuted on Super Evil Megacorp’s Vainglory (Free). However, I get particularly excited whenever there’s a new ranged hero designed for lane play. Kestrel is the latest hero to enter the Halcyon Fold in that role and I was pretty excited to check her out. After some extended play I’m also pleased to say that she’s an excellent addition to the slowly expanding lineup in the popular mobile MOBA. Now that she’s out of her week-long ICE exclusivity period we figured we’d launch our usual beginner’s guide for players that are trying to decide if she’s worth the investment.

As we mentioned earlier, Kestrel is a ranged hero  primarily designed for lane play. Considering her status as an archer (along with the giant bow that she carries around), it’s fair guess to think that the majority of her abilities center around archery-related techniques. That’s certainly the case with two of her three core abilities. Her Heroic Perk, Adrenaline, also works well with her abilities. Adrenaline is a self-buff that gets applied to Kestrel every time she lands a basic attack. It can stack up to five times and applies 10% attack speed and also reduces the cost of her abilities by 10% with each stack. Because Adrenaline wears off after 4 seconds of inactivity, it can be a bit difficulty to maintain stacks between battles. However, effective use of Adrenaline can put Kestrel in a prime position of causing serious damage with her abilities.

Outside of her Heroic Perk, Kestrel’s first ability is Glimmershot and has the potential to offer some great burst damage material. Kestrel keeps 4 arrows in the queue at any time and can launch all four of them at a Hero in short order. Each arrow offers armor piercing damage that can be improved with Weapon. However, it also causes Crystal Splash damage that can improved with Crystal. Arrows are reloaded when Kestrel stops attacking (basic wait time is 3.3 seconds but can be decreased with attack speed improvements). I like the versatility of Glimmershot because if you’re a crack shot with it, you can go Weapon and enjoy the direct damage boost. Otherwise Crystal will probably be preferred so you can improve the splash damage in case you miss your primary target.

Next up is Active Camo, which is my favorite Kestrel ability and has the potential to turn the tide of any battle. Active Camo causes two distinct effects: First, Kestrel instantly vanishes and gains bonus move speed. It’s a pretty sweet way to escape combat, but the catch is that taking damage activates a cooldown before it can be used. Thus, it can’t be used all the time like Taka’s, for example. The tradeoff is that the general cooldown after use is very short. Active Camo’s second effect is the one that can be a big deal. After she activates Active Camo she loves an invisible mist at the location of activation. It reveals enemies as they walk through it and, if Kestrel deals damage to a hero while they are in the mist, it explodes, causes damage and stuns all enemies for a second. It’s easy to use Active Camo when enemies are chasing you, but if it can be timed in the middle of a team battle it can seriously mess up the competition.  The primary attribute for Active Camo is Crystal, which increases Stealth Duration, Mist Duration and Explosion damage (while Weapon will reduce the cooldown when attacked).

Kestrel’s ultimate is called One Shot, One Kill and is the quintessential trick shot. Activate it and tap in any direction to cause Kestrel to line up a shot, she’ll then fire a single arrow across the entire Halcyon Fold, impacting upon the first hero, large creature or Turret/Vein in its path. If it hits a hero, they are damaged, revealed, and Kestrel gains full adrenaline stacks. One Shot, One Kill can be used in a few different ways. It can be an initiate move at the start of a team battle to gain full Adrenaline. It can also be used to get a kill on an escaping hero (assuming they don’t dodge). Finally, it can be a last ditch effort to take down a turret if it’s near destruction. Kestrel’s ultimate is also improved by both Weapon and Crystal, but gets a much bigger boost with Crystal. 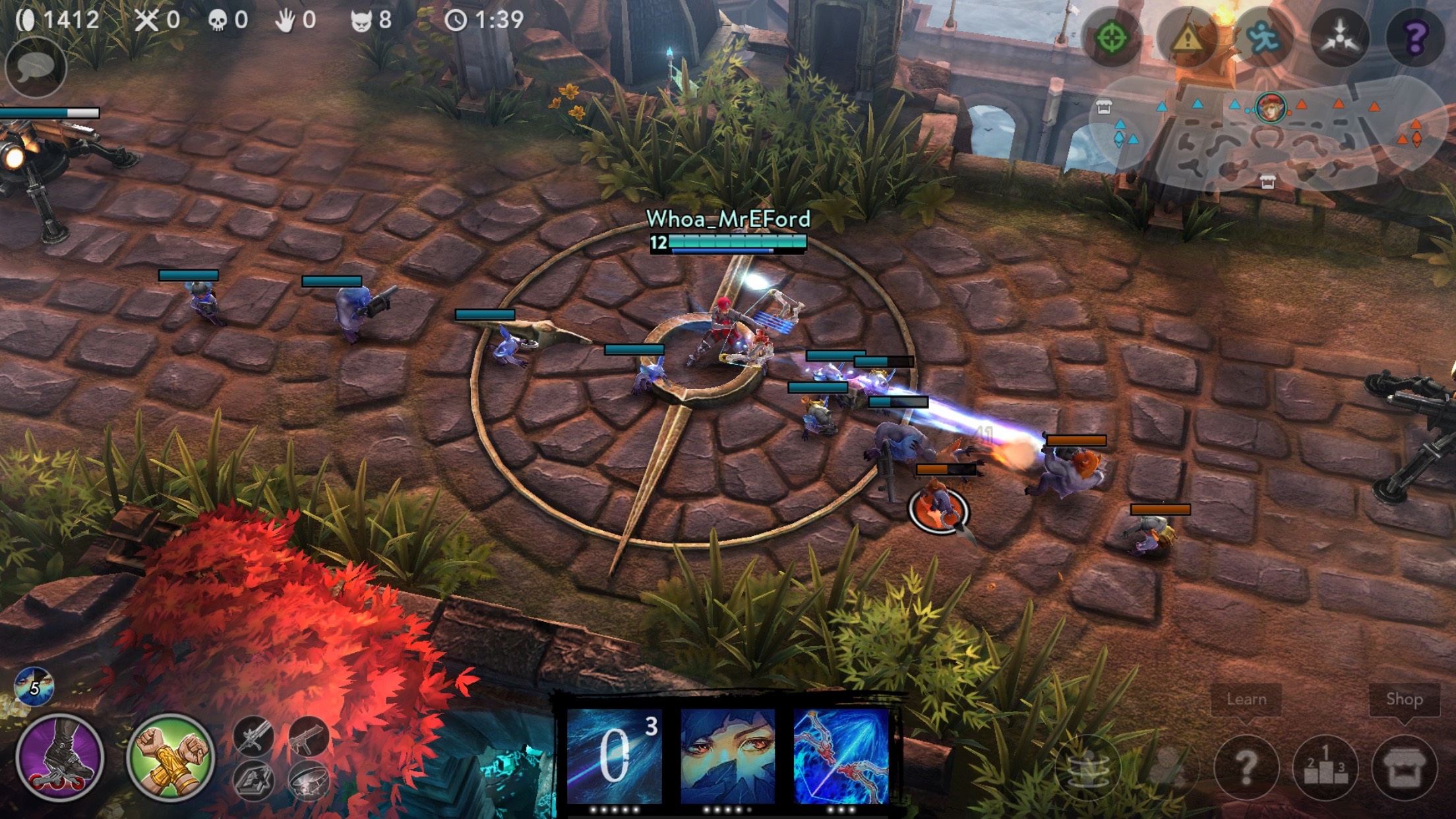 One of the more interesting aspects of Kestrel is how versatile she is from a  build standpoint. Sure, the developer recommended build is all Weapon with an emphasis on Attack Speed and Crits, but she can also do some killer damage with a decent Crystal Build. My recommendation is to start out with the recommended Weapon build, get a feel for her abilities, attack range, and attack speed, and then start branching out with different builds. In fact, the most popular build on VGFire right now is a hybrid build of Crystal and Weapon items, which help both her basic attacks and all her abilities. The hybrid build starts out with some Crystal, builds to an Alternating Current, Sorrowblade, Defense and Boots by Mid Game, and ends with a Broken Myth, and Frostburn added to the mix. If you’re looking to go full Crystal, then you replace the Sorrowblade with Shatterglass and Clockwork to significantly cut down on downtime on Glimmershot and One Shot, One Kill.

Otherwise, in terms of general strategy, Kestrel is best used as a ranged carry that starts out in the lane. Take advantage of full Adrenaline to pick up last kills and to harass the enemy lane hero. If you can properly time Active Camo, use that to cause damage and stuns to really do damage. Otherwise, I found her to be one of the easier lane heroes to play as. When engaging in team battles, either start out with an Active Camo to stun heroes and then build up Adrenaline to launch Glimmershots or start out with One Shot, One Kill to get full Adrenaline and then move to Glimmershot and basic attacks with Active Camo as a panic button. Either way, I don’t recommend initiating unless you’re doing Active Camo and definitely don’t go into bushes first.

If Kestrel seems like a hero that you’re interested in, you’re in luck, her initial ICE only week is now over and she can be purchased with good ol’ glory. I’m pretty much a fan of most Vainglory heroes but I highly recommend everyone picking up Kestrel in some form or fashion. Otherwise, if you’re interested in learning more, don’t forget to check out our weekly Vainglory streams on Mobcrush where I’ll probably be using her in a few matches.