For a game that wasn’t received with much excitement when it was released, Sanitarium ($3.99) has held up pretty well over the years. The game first released in 1998, when adventure games were just about to drop off a cliff sales-wise for the next several years. Some of the things it was criticized for at the time actually seem to have anticipated the way the genre would evolve once it became healthy again, making this game something of a pioneer. Even setting its historical value aside, however, it’s a compelling psychological adventure ported to iOS in fine fashion by the good people at DotEmu. It has its weak points, but I’d honestly recommend Sanitarium ahead of most other point and click adventures of its era.

In Sanitarium, you play a man named Max who gets into a car accident and wakes up in an insane asylum. You don’t know why you’re there, how you got there, or even your name at first, but you’ve got little time to sort it out once the game starts. A fire is raging, and you need to escape. Once you do, however, you find yourself in a very unexpected situation. That’s about all I can tell you specifically without ruining the story, and since that’s one of the main draws here, I’d prefer not to do that. Suffice it to say, you’ll be going from one bizarre situation to the next, and it’s not clear what is going on for most of the game. The game’s structure is a bit unusual for an adventure game in that sections are discretely separated from one another. You solve whatever needs solving in an area, then move on to the next. There’s no going back once you’ve moved on, and any items picked up in that area will not be carried forward to the next. 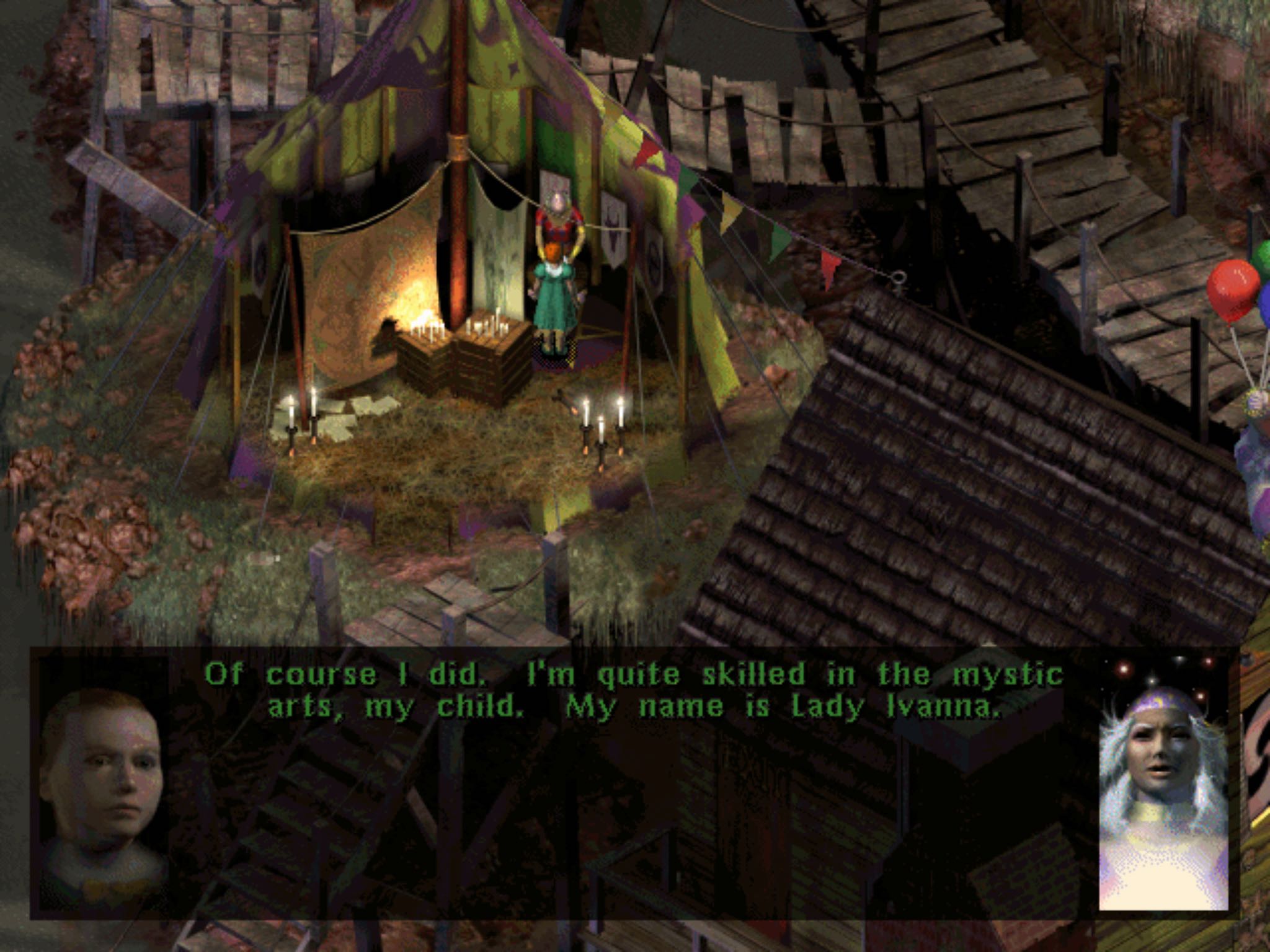 At first, it all seems terribly disjointed, but Sanitarium is a game that rewards you a little for paying attention to small details. Even with the recurring elements, however, there’s no question that the game takes a lot of weird turns on its way to the end. The variety in the settings and people you encounter is another one of the game’s strong points. The game was apparently the result of the designers having a lot of clashing ideas and wanting to stitch them together somehow. It shows, but it’s not as jarring as one would expect from those origins. There’s one section that feels a bit out of place even in the context of the rest of the strange situations, but overall, it all hangs well around the main theme. Fortunately, most of the questions you’ll have will be answered by the end, so you don’t have to worry about it being too vague in the way some other games with a similar story set-up are.

With the way the game is set up, each area tends to be fairly compact, with only a few puzzles to solve and a handful of objects to interact with. You’ve seen all of the puzzle types in this game before, surely. Some require using the right item on the right background object, others require talking to various people and getting new topics to bring up with others, and still others involve doing some sort of traditional reasoning puzzle. Then there are a few somewhat regrettable action sequences, albeit with little to no penalty for failing them. There’s a pretty good mix in the game, so you never feel like you’re doing too much of one thing for the most part. None of the puzzles are terribly difficult, mostly thanks to the game’s fairly limited focus, but you will have to do some laborious backtracking in certain sections. Your character walks painfully slowly, and you have to drag him along rather than moving by simply clicking on the destination. 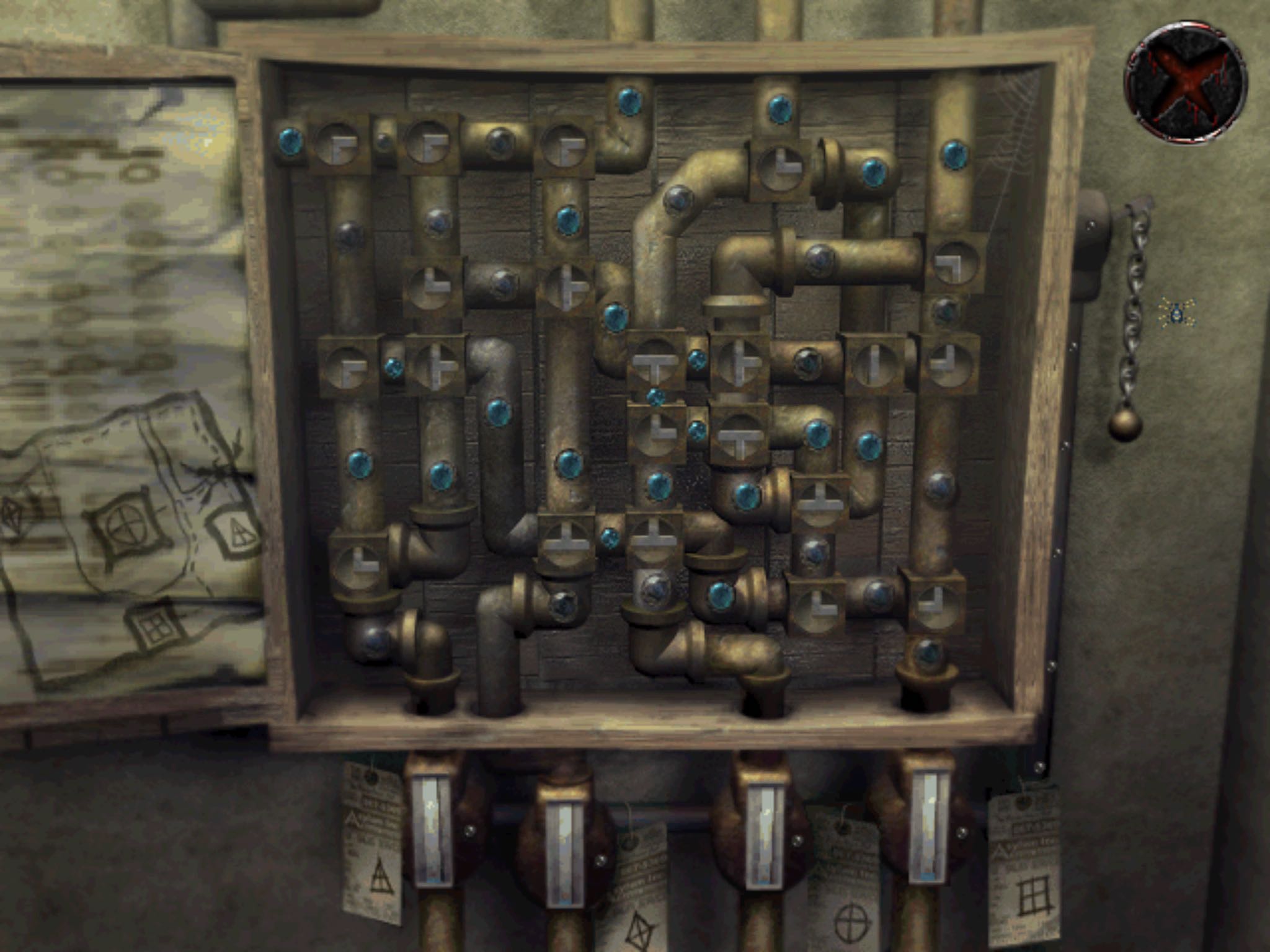 It’s sort of an odd movement system, and it’s one the game took some heat for upon its initial release, along with the relative ease of the puzzles. The control system works better here than it did on PC if only because dragging your finger for long periods of time is less irritating than trying to drag a mouse, but you still can’t help but wish for a better solution. Interacting with objects is quite easy, at least. Simply move Max near them and tap on them to take a look. You can then tap them again to interact with them, provided it’s possible. Items are used by opening your inventory, tapping the item, then tapping what you want to use it on. If you’re not sure what you can and can’t interact with, you can hit a button at the top of the screen to check where all of the hot spots on the screen are. Granted, doing so spikes the difficulty down even more, but it’s nice to have some recourse to simply trying to touch every little object in the area.

As for the difficulty, I think it’s fine. It’s probably too simple for veteran fans of the genre, but Sanitarium is more interested in telling its story than trying to earnestly test the player, and that’s a reasonable stance to take. It ends up fitting in fairly well with most modern adventure games in terms of challenge, and it’s not like it doesn’t keep your fingers busy. With a runtime of about six or seven hours, the game keeps a good pace overall, even if a couple of sections go on a bit longer than they ideally ought to. I feel like the straightforward nature of the puzzles along with the chapter-based division of areas makes Sanitarium an easy game for newcomers to the genre to slip into, with its creative art design and interesting story making it worth a play for those more familiar with this kind of game, too. 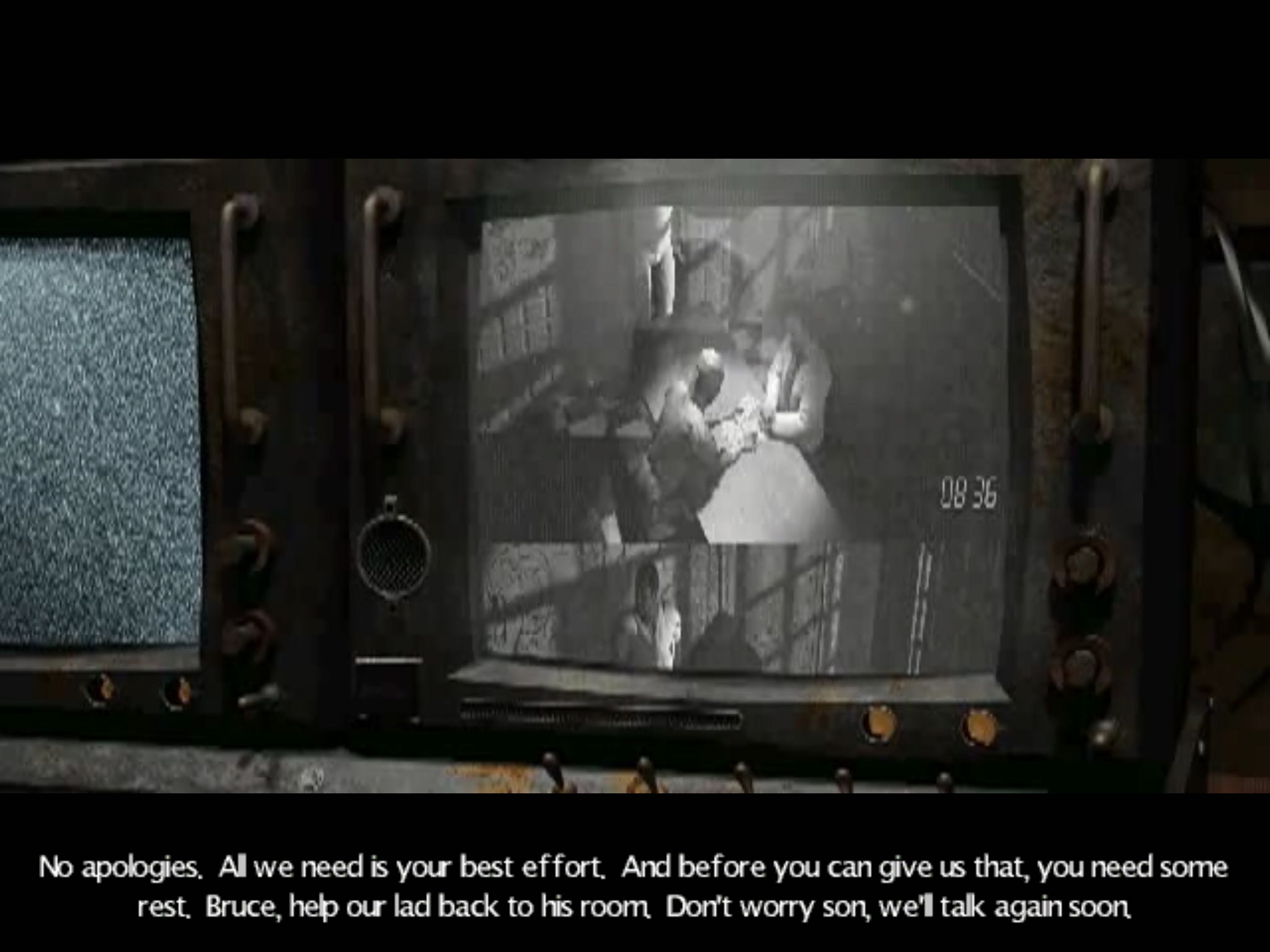 DotEmu has done their usual fine job of porting the game to mobile. The controls work better here than they did on PC, and everything looks and sounds as good as it’s going to given the vintage of the assets. In terms of options, you can mess around with sound levels, screen ratio, and the control system, and the game not only offers a bunch of manual save slots but also keeps up a frequent auto-save just in case. Game Center achievements are supported, and some of them are even the fun sort rather than being strictly tied to progression. I will note that hitting some of the hotspots can be a little fussy on smaller screens, but the game is a natural fit for mobile otherwise.

Sure, the voice acting is kind of cheesy, the story isn’t as original or unusual as it once was, and a few elements of its design feel a little past their sell-by date, but on the whole, Sanitarium is still a very good adventure game. DotEmu has done it justice both in the quality of their port and the fact that they opted to bring it to mobile at all. If you’ve always wanted to get into a classic adventure game and have found others to be too hard or obscure, you’ll probably enjoy Sanitarium quite a bit. It’s also a great choice for those who just want to get into a good story or experience a unique, surreal atmosphere without any of the hassles of trying to make a cat-hair mustache.