The flexibility of topics in the interactive fiction genre is one of its greatest strengths. I’ve said this before, but due to the relatively low production costs of putting words on a page, interactive fiction can take risks that other games dare not. Thankfully, nearly every company releasing gamebooks isn’t shy about flexing that privilege. The occasional release even goes for comedy, a fairly hard topic to do well in gaming. Earlier this year, we had the absolutely delightful Ryan North’s To Be Or Not To Be ($6.99) from Tin Man Games, and now, from Choice Of Games and author Nick Aires, we have the madcap super-villain simulator, Diabolical (Free). I’m feeling a little bit spoiled, to be honest.

Simply put, Diabolical is both a lot of fun and very well-written. You play as a new super-villain, taking up the role just as you’re robbing your first bank. While you’re strictly small-time at the start, you soon attract the attention of some superheroes, and perhaps more troublingly, some very big super-villains. Each chapter increases the stakes alongside the outlandishness of your crimes, culminating in a tug-of-war for the very Earth itself. It’s a smooth, consistent progression that moves at exactly the right pace. Best of all, you can choose what kind of villain you’d like to be. Are you the pragmatic planner that lurks in the background, letting your henchman do all the work? Or do you prefer to get your hands dirty by doing jobs yourself? Are you a killer, or a negotiator? Are you in it for political reasons, or are you just a creature of chaos? It’s all up to you and the choices you make as the story unfolds. 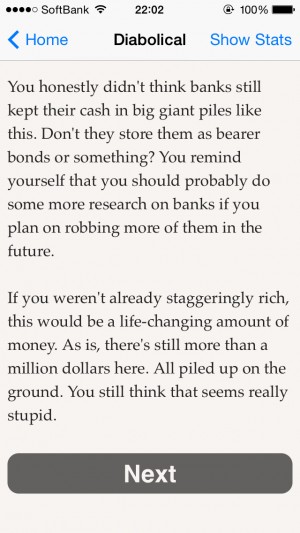 Similarly, you control to a great degree who your friends and enemies are. There are quite a few characters in the story, but which ones stick around to the end depend on your decisions. Naturally, since this is a Choice Of Games release, there are some potential romantic relationships you can cultivate as well. That aspect is sitting in the background a little this time around, and rightfully so, due to how narcissistic your main character is. When, or if, it does enter the picture, however, it doesn’t feel forced or tacked-on. Enough about other people, though, because Diabolical is all about you. Oh, to an extent, that’s what all interactive fiction is about, but Diabolical owns it simply because it can. It makes sense for a super-villain to narrate his own actions. Behaving in unpredictable ways and escaping from certain death are stock-in-trade in the bad guy business. Everything revolves around you, because of course it does!

Although you control to a great extent how silly the game is versus how dark it is, the writing in Diabolical keeps its tongue planted firmly in its cheek for most of the story. Let’s face it, the topic lends itself well to absurdity, and even grim-dark comic book villains have a lot of inherent goofiness to them. I’m not going to say that every joke and attempt at humor sticks the landing, but enough of it works that I spent most of the time I was playing with a wide grin on my face. Nick Aires, the author, has some prior experience writing comic book-style stories, and his knowledge of the genre gives him all the tools he needs to send it up hilariously.

The game uses the usual Choice Of Games style of building up statistics through conversation choices which in turn affect your chances of successfully pulling off future choices, but it also makes use of another system called Planning Points. Certain choices will reward you with these points, which you can then spend to make choices that would otherwise be blocked off to you. There aren’t many opportunities to earn these during the course of the game, so you’ll want to consider very carefully whether or not to spend them. Of course, even if you don’t have any points, you can still lumber along to a successful ending if you play things right. 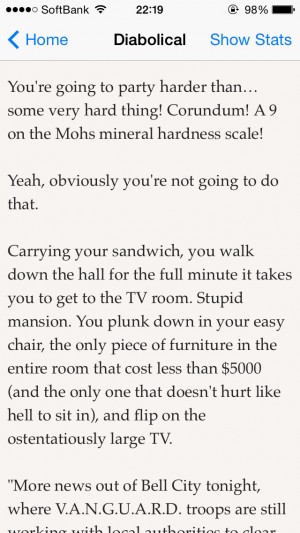 I really enjoyed the climax of the game, too. Other than a somewhat odd side-story just before the halfway point, Diabolical is very good about having each chapter top the last. The scale gets bigger, the action more intense, and the enemies more dangerous as you go along. While the narrative isn’t following a single thread, the writer makes sure in each part of the story to seed things that lead into or play some part in the finale. The ending is quite satisfying, too, particularly since it gives you a lot of choices as to how exactly things wrap up.

You can try the first few chapters for free to see how well you like it, and if you’d like to continue after that, the rest of the story is available as a $3.99 IAP. I think it’s a good way to go about more experimental stories like this one, since the odd theme and cheeky writing might not be to everyone’s liking. The first few chapters will definitely give you a sense of how the whole game plays out, so if you enjoy what you find in those early sections, you can buy the full game without too much worry.

I’ll admit I’m predisposed towards the theme due to my personal interests in comic books, old spy movies, and taking over the world with my army of mindless shark-mummies, but even setting that aside, Diabolical is a wonderfully entertaining piece of interactive fiction. It gives the player a lot of flexibility, has a great sense of humor, and even manages to tell an interesting, if absurd, story along the way. I’ve enjoyed many of Choice Of Games’s releases over the years, but this is definitely one of my favorites of the bunch. I’d strongly recommend it to would-be super-villains of any type.