Wizards and Wagons($4.99) is out now from Touch Dimensions and it is one of the more active and engaging item shop sim games I have played. Known for more traditional strategy games, Touch Dimensions is stretching their dev skills to reach into the sim genre. Rather than sitting in town and waiting for customers to come to you, W&W mobilizes the store and puts you in the drivers seat. As last week’s Touch Arcade Game of the Week, I was not surprised to find dynamic gameplay and an addictive quality that has put some extra rings under my eyes for the last several days from lack of sleep.

As a wandering merchant your main goal is to make loads of money. By evaluating the supply and demand of each town in the game, you can buy low at a town selling goods, then travel to a town in need of those goods and sell high. Simple enough right? As your cart rumbles down the road, you will have to fight off bandits and monsters intent on stealing your stash and destroying your house on 4 wheels. This is where the action component kicks in. 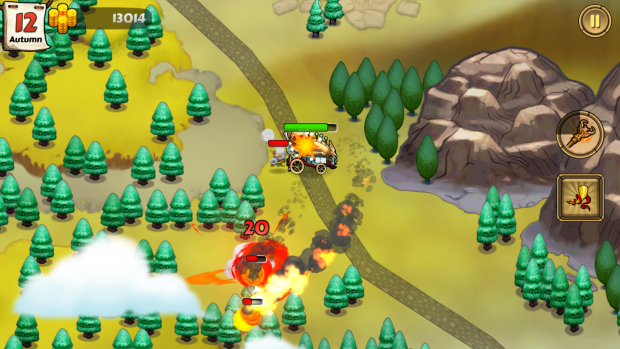 Depending on the town you are travelling to you might end up killing a few lowly slimes or having squads of attackers hurling themselves at your cart(and possibly killing you). The starting weapon you get, a standard bow, is actually really effective as long as you can tap the screen quickly but there is a large selection of ranged and melee weapons you can equip on your cart to beef up your trail blazing ability. This part of the game is kind of like a rail shooter with the cart following a pre-set path and you responsible for aiming your attacks to dispatch your attackers. One thing to remember though is that the more weapons you bring with you, the less room you will have for other cargo.

There have been some reports that the game is too hard and that people have had to restart the game just to survive the first few trips. I think it’s important to note here that even though the game has a cutesy fantasy possibly even Zelda-ish look to it, this is first and foremost an economics simulation that is designed to be challenging and richly rewards successfully negotiating lucrative deals and treacherous passages to far off towns. You will need to understand a little bit of risk management and you will need to be able to tap your way out of your cart getting swarmed from time to time. At the point I am in the game I have indeed died a few times and have been sent back to the starting town, but you only lose 10% of your gold. This is a pretty minor set back compared to some of the hauls you can bring in on a successful trip to a town in desparate need of what you are bringing them. 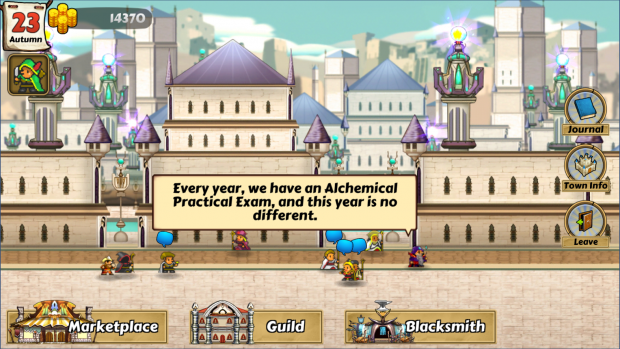 I am definitely in a stable position to continue making gold and at no point have I met my demise without thinking something like, “I should have repaired my cart before leaving" or “I should have equipped that other weapon for this journey to a far off town." As you get further away from the starting towns, bigger and badder enemies start to appear. Between bigger carts and weapon upgrades, there is usually no reason to fear venturing far and wide as long as you prepare and repair before embarking.

On the economics side of the game, favorable trades are sometimes difficult to identify immediately. In addition to the normal supply and demand that each town has posted, you will also have the option to pick up quests that give rewards for completing tasks. Some of these tasks will penalize you for failure, and some just woefully fall short of being worthwhile. The game strikes a nice balance of challenge that forces you to decide which quests or trade routes are worth investing time into completing. You might end up barely getting across a 10 day hike only to find out that the goods you have brought are no longer in demand and the trip cost you a few hundred gold. There will be times you go from a full health bar to almost dead in one round of cart combat, but you can always repair at the next town, and there are definitely attacks that you can “pre-fire" to prevent getting bogged down and stay healthy. Quests you get from random towns people also have some hidden rewards that are pretty great and generally a little better than guild quests, but every once in a while you can get a gem in the guild too. 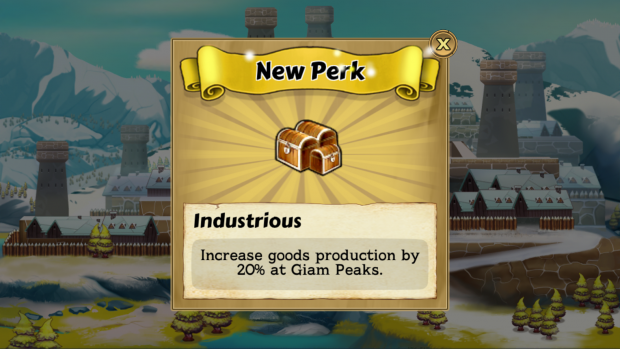 Really the entire game has a fantasic sense of balance. While it expects you to make your own fortune, your losses and setbacks are measured and not too severe to recover from. There is a lot to like about this little vendor sim and well worth the price of admission.