Kemco appears to be on a bit of a strategy game kick of late on iOS, with Legend Of Ixtona ($8.99) releasing a few months ago, and now, Legna Tactica ($7.99). Well, I can appreciate them wanting to change things up a bit here and there. Although I know many of their fans appreciate the regular trickle of traditional JRPGs, there has to be some kind of saturation point. Forty titles in, Kemco might just be finding it. Of course, it’s also possible that their stalwart developers simply feel like making something different. Whatever the reason, we’ve got another strategy RPG in front of us, and I’m sure no one will fall out of their chair when I say that it’s very derivative of the classic Tactics Ogre. This genre seems to have trouble shaking off Yasumi Matsuno’s influence, and Kemco certainly weren’t going to be the ones to do it.

There are dabs of inspiration from other classic games in here, too, but Legna Tactica is mostly grabbing from the well-worn Tactics model of turn-based strategy on isometric battlefields. You can gain an advantage by attacking from a higher point or hitting the enemy from behind, and certain types of terrain convey bonuses and penalties. You won’t ever need to make extensive use of those features, however. Like stablemate Ixtona, Legna Tactica is a fairly light strategy game. The enemies aren’t very clever and your team is generally quite strong in relation to them, even if you don’t partake of the extra missions you can pick up from the tavern. Gaining levels improves your stats, while extra skills are unlocked by spending points on each character’s unique skill tree. Those points are only earned by progressing the story, which places a hard cap on how much of each character’s tree you can open up in a single playthrough, but the game offers a New Game Plus mode if you truly want to max everything out. You can also respec a character whenever you want with no penalty, so you don’t have to stress terribly about your choices. 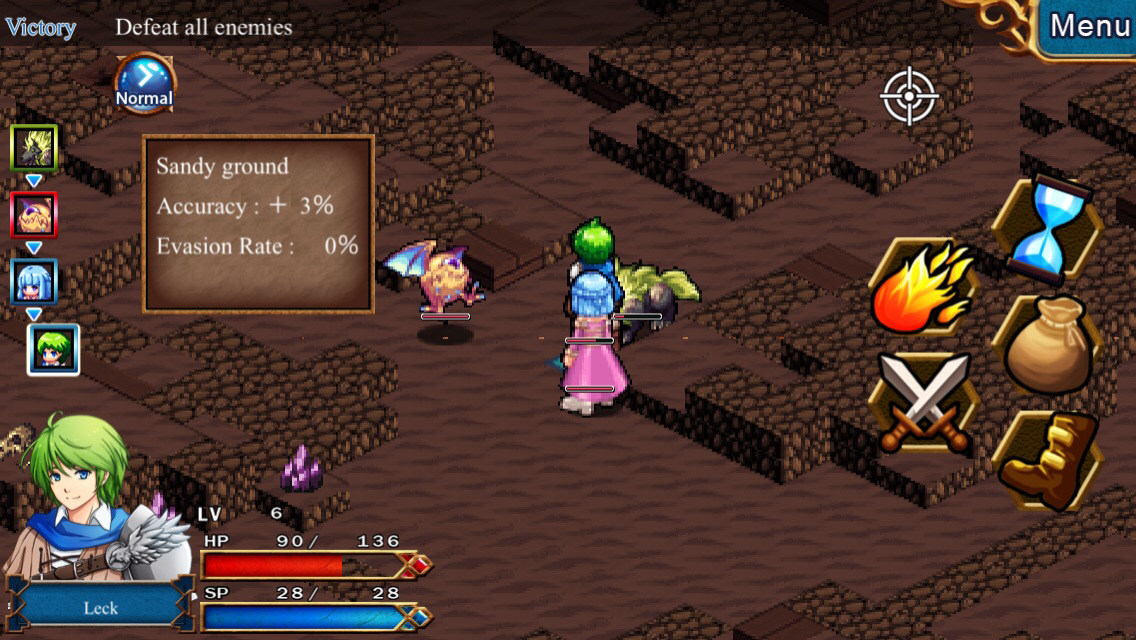 The story is a stew made from ingredients like the political intrigue and ideologically-opposed friends of Final Fantasy Tactics ($13.99), the orphans of every mobile Kemco RPG ever, and the mysterious magical girl seen in every third JRPG or so. You’ll specifically be following the character of Leck, an optimistic young soldier trainee who is almost immediately in over his head. He’s initially joined by his childhood friend and fellow trainees Astar and Miana. Astar is soon appointed to a different branch of the military to pursue his goals in his own way, while Miana serves her role as the supportive big sister-type who rounds out the awkward love triangle. There are a number of other characters, though with the playable cast topping out at 14 members, you can probably guess that many of them are little more than cardboard cutouts.

You’ll be prompted to make choices here and there that seem to affect the story, though I can’t speak to the extent of that as I only ran through the game once. That said, even if they don’t make a major difference, it does give you the feeling that you have some input into the narrative, so I’m happy it’s here. Those choices are also good for breaking up the sometimes lengthy and almost always boring dialogue. As usual for a game developed by Hit-Point, the localization is grammatically sound but tedious to read thanks to being overly literal. There’s at least a good attempt at telling an interesting tale here, but it would have needed some top-shelf massaging to bring it out. As is, the broad strokes will keep you going, even if you’ll likely find yourself frequently hammering away at the screen to clear the text. 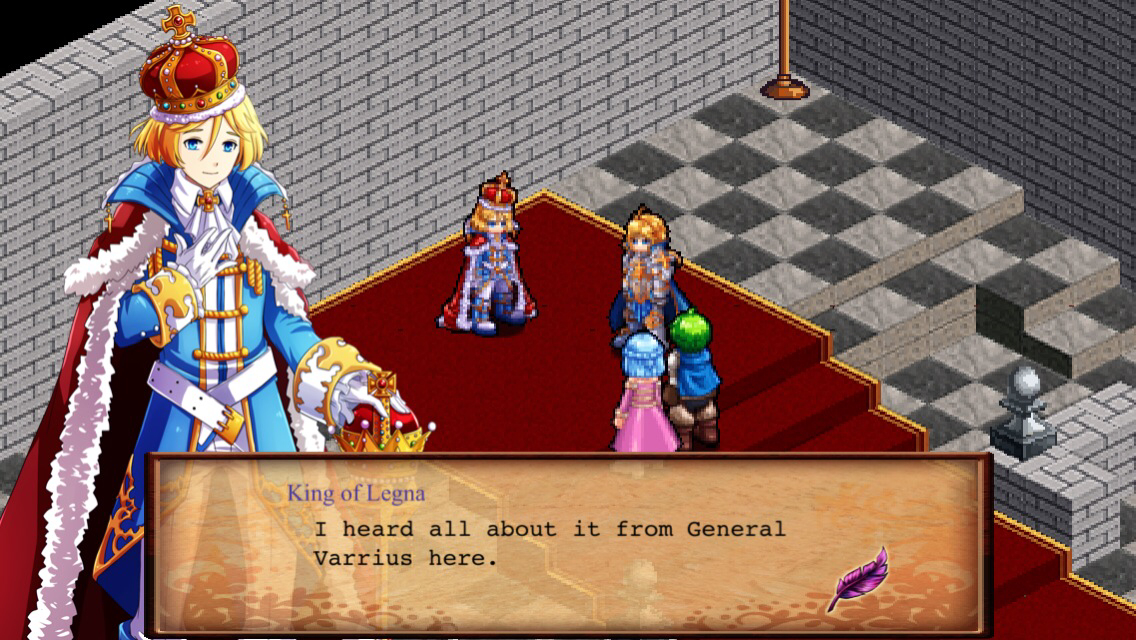 Hit-Point’s never been all that great at the narrative side of things, though, so I wasn’t all that surprised. The reason why I typically look forward to their work is their seeming desire to experiment with gameplay systems to the extent that their limited resources allow them to. Regrettably, Legna Tactica doesn’t show any of this developer’s usual creativity. As far as its mechanics go, it follows the typical lines of the genre to a tee. If you want to be optimistic about it, the game mechanics are sound in most respects save difficulty. There’s a nice variety of skills and abilities to use, there’s a reasonable variety in the foes you’ll face, and the skill tree system certainly works. This has all been tried and tested many times, after all.

More pessimistically, everything this game does has been done before, done better, and at least a few of the games that have done so are available on iOS. Is having content you haven’t played before worth fiddling around with fussier touch controls and tinier grid squares than other games have? Is a new story worth dealing with the ugly appearance of mismatched elements? Are new maps and characters enough to overcome the game’s toothless difficulty? To tell the truth, I can’t answer any of these questions with much certainty. Legna Tactica is just solid enough that you might enjoy playing through it, but flawed and generic enough that you certainly wouldn’t be missing anything if you skipped it and simply did another run-through of your preferred strategy RPG instead. I like it as a game better than Kemco’s other strategy game, Legend Of Ixtona, but that game at least had a couple of interesting ideas to help it stand out. 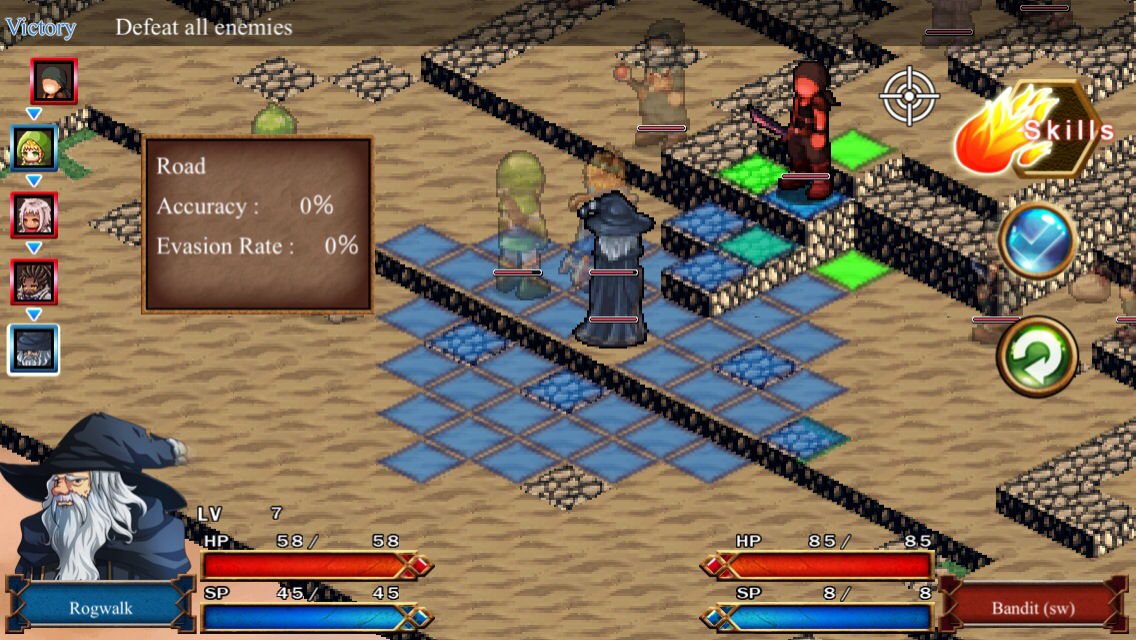 If you love Japanese-style strategy RPGs, don’t mind if they’re pretty easy, and have an excess of time, Legna Tactica is a well-constructed enough facsimile to keep you busy for a little while. Like many of the games from this publisher, it’s nothing I’d jump over the turnstiles to get to, but it fills the belly well enough. I’m not sure if that’s enough when the iOS platform is host to some of the better strategy RPGs available today, though.