There have been many games on iOS that tried to ride on the coattails of Nintendo’s Pokemon, but very few have much merit to them. One of the better attempts came from NTT Resonant and ZigZaGame. It was called Dragon Island Blue ($0.99), and while it had its rough points, it scratched the urge to catch ’em all well enough for many. The sequel to that game, Hunter Island ($0.99), basically did what a great follow-up should. It took all of the strong points of the original game, addressed some of the weak points, and added in a few new things of its own. Neo Monsters ($0.99), in spite of ditching the Island naming theme, is for all intents and purposes the newest game in the series. I wish I could say it does for Hunter Island what that game did for its predecessor, but Neo Monsters seems less interested in how it can improve on the previous games and more interested in how it can get some of that fine Puzzle & Dragons (Free) cheddar.

Not that I blame the team behind the game, I suppose. Why spend time building worlds and dungeons to explore when it seems a lot of players are happy to just collect and battle monsters? I think the problem here is that Neo Monsters feels like it’s sitting on the fence, and as a result it ends up being a poor example of both a paid monster-catcher in the vein of Pokemon and a free-to-play social RPG like Puzzle & Dragons. Unlike the previous games, you’re probably not going to be able to beat Neo Monsters with what you can catch out in the maps. No, you’re going to need some epic monsters to see this through to the end, and the only way you can get those is by spending premium currency and getting very lucky. The game gives you a fixed amount of that premium currency, so you’ll have several tries at pulling something good, but if you don’t, the only way to get more tries is to open your wallet. Even then, you’re still up against the poor odds of getting a viable end-game monster, so you’re better to just save your money, delete the app and start over. 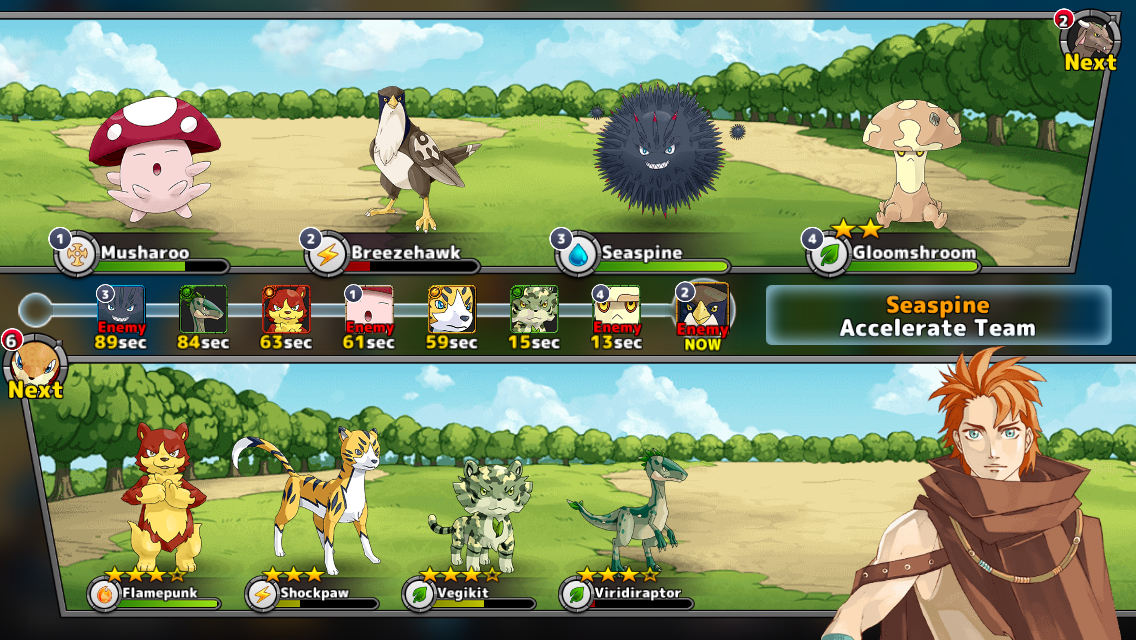 The questionable balancing of the monster selection hurts the game in more ways than just having you come up against a veritable paywall in the story, however. It also makes the field portions of the game feel useless. Why bother catching anything if it won’t be useful? The only semi-useful monsters you’ll find on the maps are clearly marked, leaving the random battles completely devoid of excitement. I feel like the developers might have realized this, too, because both the dungeons and the overworld maps are pitifully small and bereft of points of interest compared to prior titles. Someone figured out that the game’s current set-up meant there was no point making elaborate maps, but didn’t quite carry it to the point of just cutting them like most social RPGs do.

With tiers mattering as much as they do in Neo Monsters, the massive monster selection is pretty much a moot point. While there are technically many different moves spread among the hundreds of monsters, they more or less boil down to a small handful that come in different elemental flavors. On paper, there’s a bit of interesting strategy to be had thanks to the presence of several chaser abilities that allow you to deal extra damage after sticking certain status ailments, but it never quite works out that way. Instead, it’s all down to who has the highest-tier monsters, and who gets to go first. Some of the moves seem to be there just to stack the deck against you in battles with the CPU. It’s pretty usual for major enemies to take their turns ahead of your time, and by the time they’ve had their go at you, you’ll probably be down a couple of your key monsters thanks to moves like Timestrike, Reckless Attack, and Protector Eater. 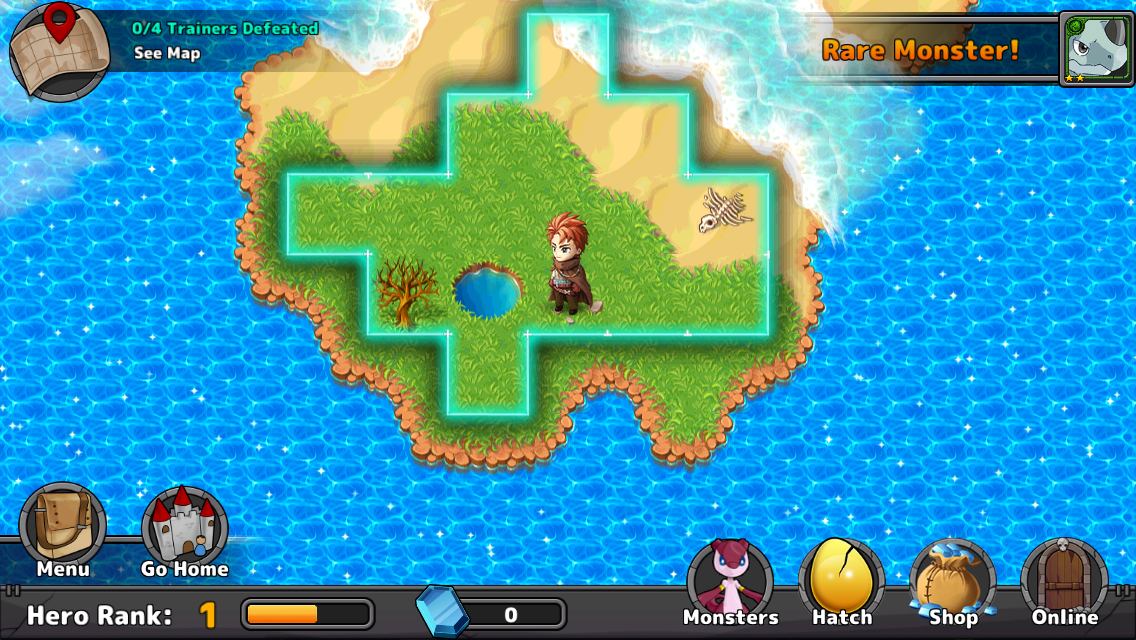 If you’re lucky enough to pull a powerful monster, you’ll probably be able to appreciate the few decent points of this game. The monster training segments are like a simple board game, and they’re a pretty fun way to handle something that’s usually quite dull. The large number of monsters is impressive in one way, even if the general homogeneity in terms of skills mostly defeats the purpose. The story has its moments, I suppose. There’s an awful lot to do between the main story and the online extra content, too. Unfortunately, with the core mechanics being what they are, all of this feels like hanging tinsel on a dead and barren tree. These are flavor enhancers, not flavors in and of themselves.

To get another angle, let’s throw away that dollar spent on the purchase and look at this as a free-to-play game. In that category, it’s still pretty poor. The turn-based battles, which form the core of the experience, just aren’t very interesting or fun. Bring the biggest monsters, use their biggest attacks, and collect your win. The battles take far too long because of the large team sizes, which seem to serve no purpose save padding things out. Then, outside the battles, you have a lot of walking around that also doesn’t seem to have much point. There are no items to find, no secrets to uncover. It’s just bloat. Find the clearly-marked trainers using your map, beat them, train up your team with the points you’ve collected, win the next round of the tournament, and repeat. The online quests make use of a stamina meter, and it’s far too short to get much play out of in a single session. There’s nothing engaging or unique about Neo Monsters at all, and that’s the kiss of death in such an incredibly competitive sub-genre. 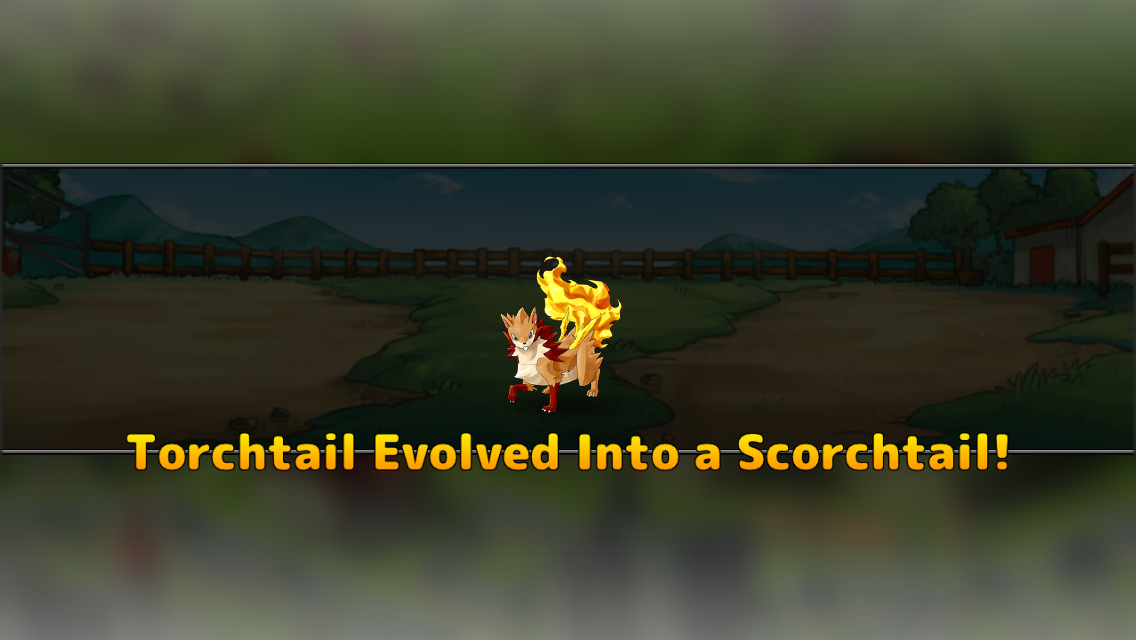 I could mention the frequent server problems that can render large portions of the game unplayable, the excessive and unskippable tutorials, or the terrible animation, but it’s all incidental to the simple problem that the game itself isn’t very good. If you want a decent Pokemon clone for a buck or two, buy Hunter Island or Micromon ($0.99). If you want a good social RPG, grab Brave Frontier (Free) or Terra Battle (Free). Neo Monsters might lead to something enjoyable in the future, but for now, it’s an awkward mess that doesn’t seem to know what it wants to be.