Finally on mobile, Young Horses’ Octodad: Dadliest Catch ($4.99) has you controlling the eponymous Octodad, an octopus who has a wife and two children, and is just really trying to keep this good thing going. Don’t ask why the children are human, you won’t get any good answers. And if the game feels like you’re jumping into something you should know more about, that’s because it is a sequel to a student game that the principals of the studio made while they were students at DePaul. You’ll catch on pretty quickly, though – you control an octopus that is pretending to be human, trying to do normal human things like going grocery shopping, mowing the lawn, and avoiding the maniacal chef who wants nothing more than to reveal you for the fraud that you are. This all while you have octopus limbs that don’t do a great job at simulating human legs and hands, and the human tasks that you must accomplish. 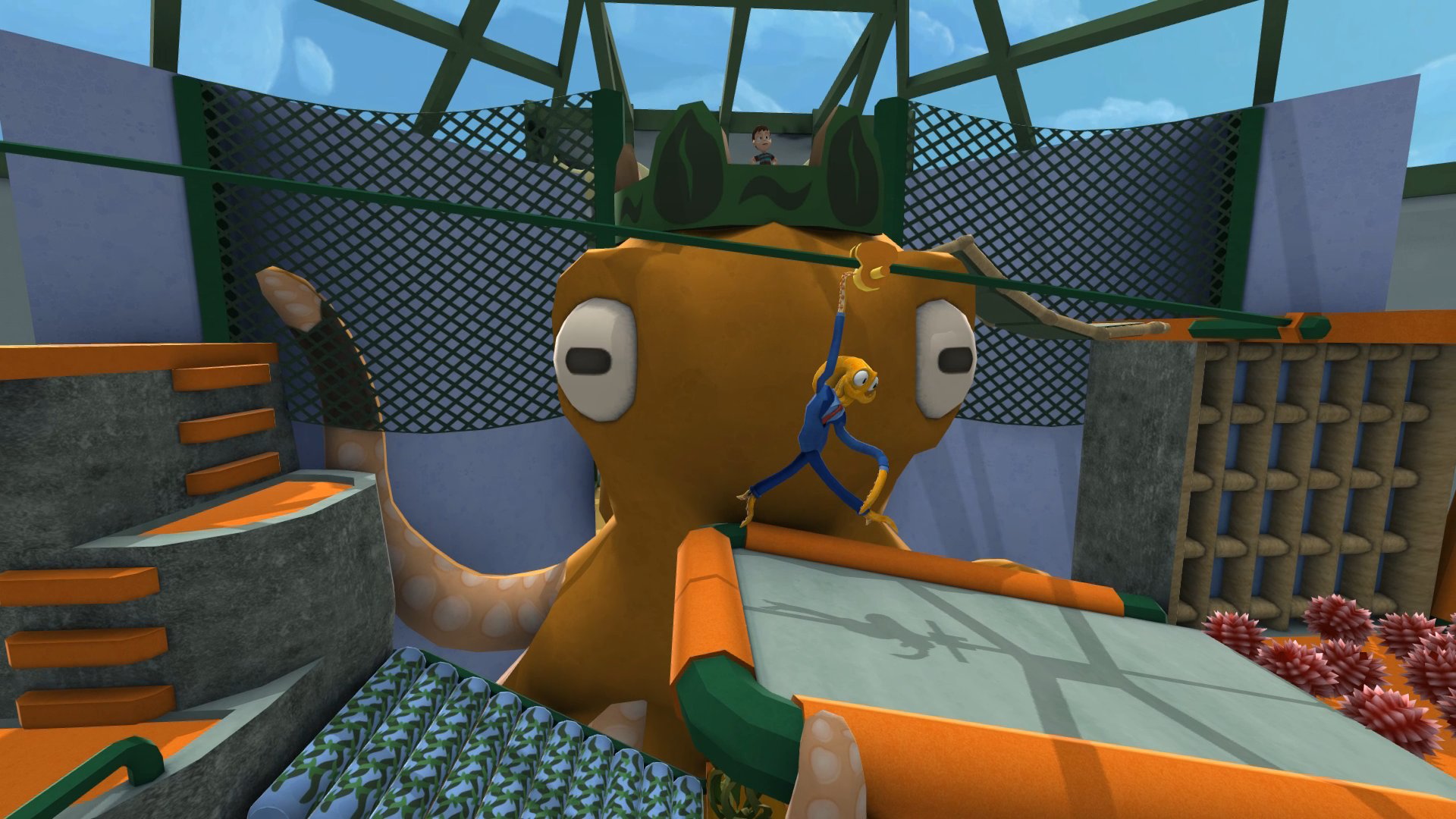 It’s easy to see where the connection to the idea of impostor syndrome comes in with this game. The whole experience is about trying to pretend that you’re something that you’re really not. While I don’t think that many people are actually octopi, I can certainly relate to the idea that I look like I’ve got my stuff together, but really am just flailing about to see what works. But you can also enjoy the game just on a surface level of “it is difficult to get that lawnmower out of the shed with all those sportsballs!"

The game really does a great job at succeeding at being a game of high emotions and high comedy. The writing, including the interpretations of Octodad’s various blubs and gurgles, is fantastic. Children in entertainment tend to be precocious and/or annoying, and this game does a good job at minimizing those factors. While the game being a desktop and console game first means it was able to put in a lot more in the way of production values than most mobile-only games, Octodad does stand out a lot because of how well-made it is. 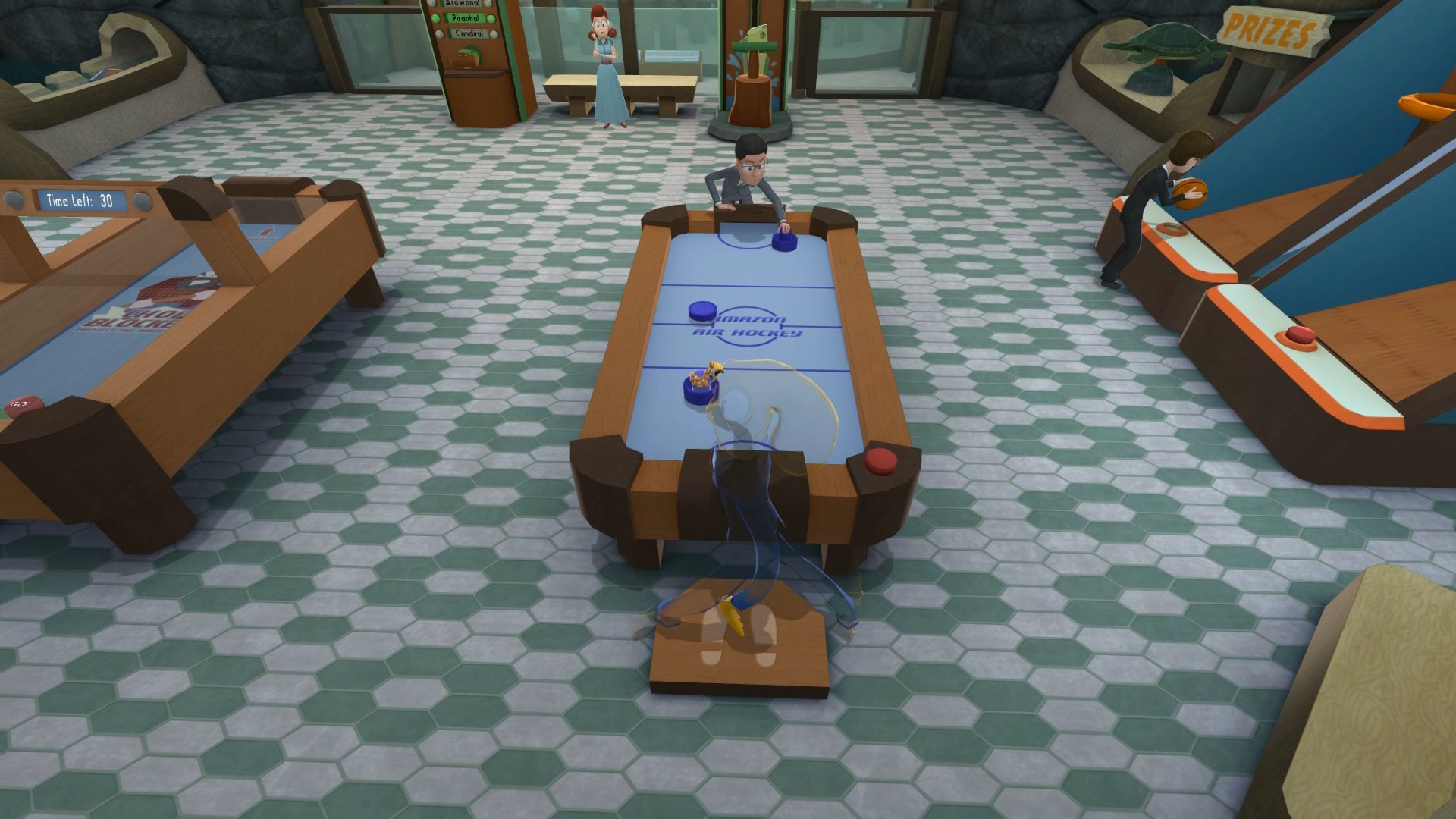 The mobile port deserves a lot of credit for being fantastic, as far as features and performances go. The game will murder your battery, but it performs at a very high level. While the controls have been optimized as much as they could be for the touchscreen, you can play with MFi controllers. You can even get two MFi controllers in the mix in order to do the game’s co-op mode, where each player controls different limbs. There’s even Apple TV support as a universal app, and the game boasts iCloud saving, which worked without issue for me. This is the exact same experience as the desktop and console version, you’re not losing out on anything by playing the mobile version. Even the Shorts DLC has been implemented from day one.

As far as the touchscreen controls go, they’re a bit smarter than the touchscreen controls that were in the desktop version of the game, where different segments of the screen controlled different things, but still worked well enough to play the game. The good news is that no matter what, Octodad is meant to be silly and goofy, so any difficulties or issues with controls are kind of part of the bargain. You by default use your thumbs on each side of the screen to control each one of Octodad’s legs, and use a two-finger tap to switch to Octodad’s arm. This is where the awkwardness comes in, as you have to use two fingers to control the arm vertically, as moving with one finger controls it horizontally and depth-wise. I do wonder if using one thumb to control height and the other to control width/depth of the arm would work better, but I also imagine the controls have been tested for that. Still, it feels suboptimal. 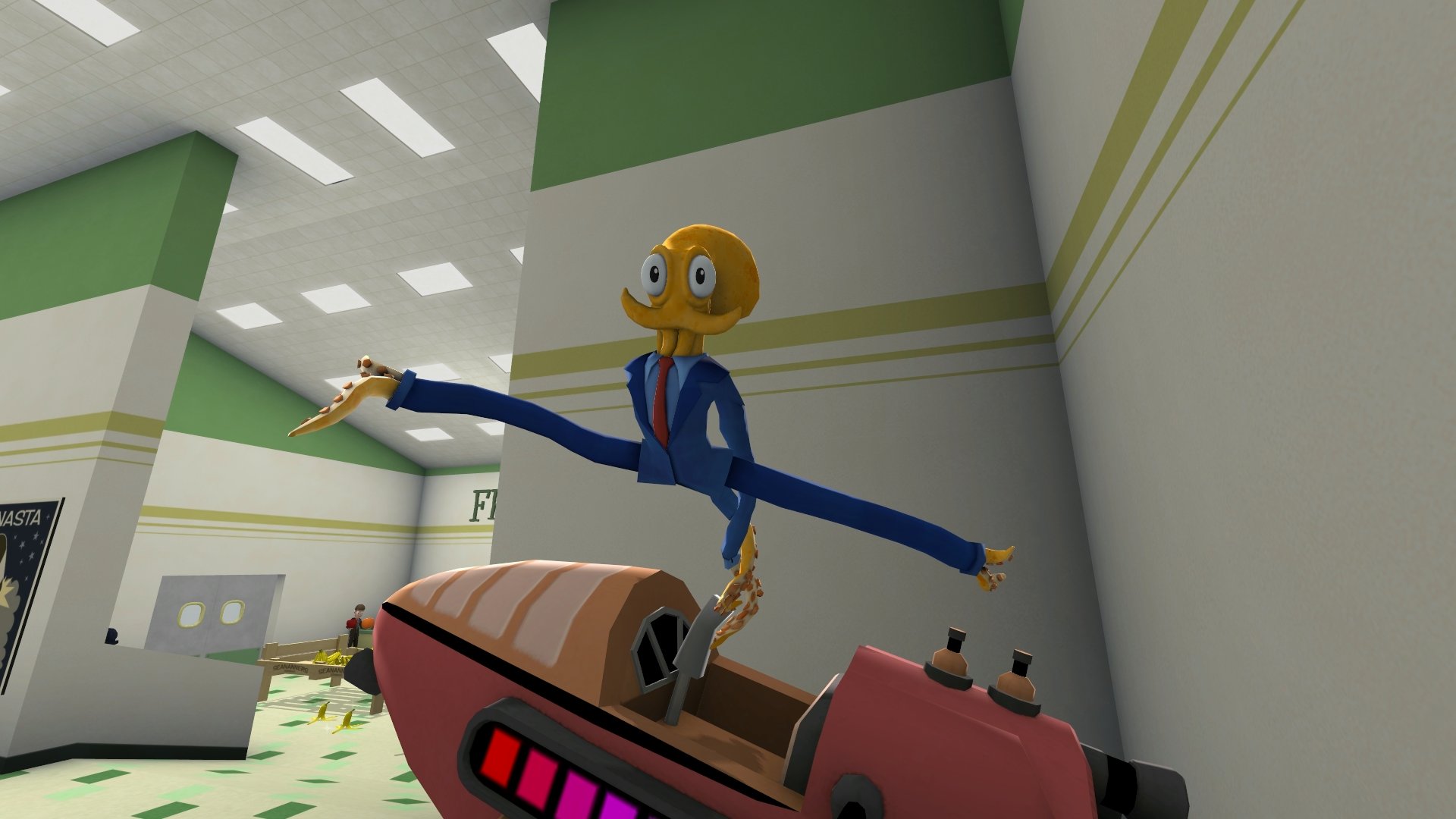 Also, Octodad tends to struggle with any real test of skill. The game does minimize sections where there are realistic possibilities of failure, or challenges that would really force you to have a preternatural level of control of Octodad’s limbs. Throwing accurately, or trying to plug up leaks with a timer on you is not easy. These scenarios are frustrating when they pop up, but the game is largely designed where you don’t have to deal with too many of them – or have alternatives around them. Good luck getting the ties around the game, they are explicitly designed to test your skill and control of Octodad, and, well, I think I’ll live without all those ties.

This does mean that Octodad works best as a game where you perhaps play it just to experience it once, or to show it off to a friend where you play in co-op with multiple controllers. It’s a great experience going through it, the game probably lasts as long as you’d want it to. I just don’t see this as the kind of game that most people would enjoy speedrunning versus something like the much-tighter Mos Speedrun 2 ($0.99), for example. Maybe you will find speedrunning Octodad to be to your taste! But it’s not the ideal game for it, for sure.

If you know what you’re getting with Octodad, which is a game that is meant to be intentionally clumsy, and forgive the moments when the clumsiness works against you, you’ll have a good time with the game. There’s a lot of great moments, and some frustrating moments, but such is life, no?