I don’t know about you, friends, but when I play games that give me moral choices, I tend to stick to the good side. When it’s time to play the evil side, I really have to push myself into doing the bad thing, even knowing full well that it doesn’t actually hurt anyone. I guess all those Saturday morning cartoons and superhero comic books worked. In games, as in cartoons and comics, it’s usually pretty easy to sort out the good side from the bad side. Rescuing kittens from trees is good! Lighting a tree full of kittens on fire is bad! It’s pretty rare for a game to present genuinely difficult choices that have no clearly just answers. The latest interactive fiction release from Choice Of Games, Deathless: The City’s Thirst ($3.99), had me second-guessing myself all the way through. It’s ultimately the best quality in a story that otherwise feels a bit episodic and unfocused. 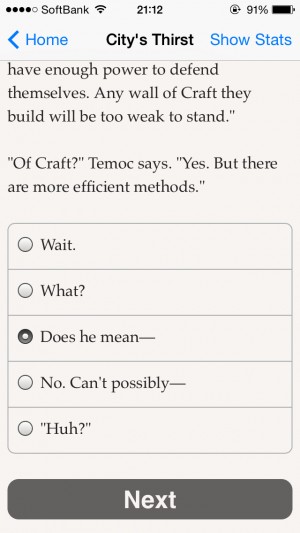 Written by Max Gladstone, The City’s Thirst takes place in the same world as Choice Of The Deathless ($3.99) and a series of non-interactive books called The Craft Sequence. It’s a great setting in that it features a lot of exciting fantasy elements but still feels very unique. There are wizards in this world, but they’re more like corporate lawyers than anything else. Gods are real, but also killable, a quality the people of the world have taken advantage of. It’s a world driven more than anything by competition over finite resources, with one particular element taking center stage in this game. You play as an associate at Red King Consolidated, a corporation that makes a great deal of money providing valuable water to the parched desert city of Dresediel Lex. It’s your job to negotiate with nearby territories to secure valuable water rights, both to keep the millions of thirsty city-dwellers alive and to keep your boss’s wallet fat.

You can best accomplish both of those outcomes by taking as much as you can in exchange for as little as possible. Basically, lying, swindling, cheating, or using outright force are fine ways to give your company an advantageous position in negotiations. It’s not like it’s not for a good cause, though. Throughout the entire game, the city’s water level sits there in your stats screen, rising or falling depending on your performance. Whatever you might think of your boss or some of his employees, at the end of the day, the normal people in the city going about their day-to-day lives are depending on you for their basic needs. It’s the right thing to do, albeit with some questionable people profiting along the way. 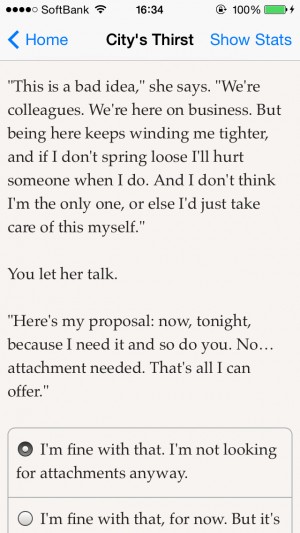 That said, the things you have to do to keep the water flowing really feel wrong a lot of the time. Things start off simply enough from a moral point of view, but the further in you go, the more you feel like you’re in one of those old Three Stooges routines where a banker is threatening to foreclose on an orphanage, with you in the banker’s role. Except here, the banker is simply trying to free up funds to save even more orphans. Time and again you have to balance the ethics of screwing over the few standing in front of you to support the faceless many, and it’s all up to you as to where you end up falling on that particular quandary. The choices are flexible enough for you to go in a few different directions, but it’s pretty much impossible to please everyone, so sooner or later you’ll have to sort out what is most important to you.

The game is broken up into five scenarios, with each containing a mix of temporary and persistent characters. All of the possible romantic interests are more or less at ideological odds with one another, so it requires a defter hand than usual if you want to be a cad. While the final episode technically builds on everything that came before it, the ending feels pretty anticlimactic. Somehow, that matches the tone of the story, though. The City’s Thirst doesn’t feel like the most important story of your character’s life. In fact, it kind of feels like it’s business as usual for someone in your position. You can certainly up-end the apple cart on your character’s status quo, and that’s probably the more exciting ending to go for, but even there, it still ends fairly abruptly and with less noise than you’d expect. 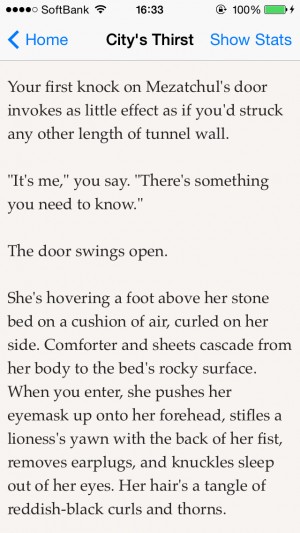 Even with the somewhat odd pacing, The City’s Thirst still manages to be engaging thanks to offering plenty of meaningful choices. There’s a lot of room to play a variety of character types, and you can shift the story relatively significantly through your decisions. As usual for a game from this publisher, your decisions will shape your character’s stats, which in turn determine the success you’ll have with future choices. There are several major characters to interact with, and the game keeps track of how cozy or cold your relationship with each is. Those relationships also affect your options later in the story. For example, give a reporter a little assistance early on, and he might do you a favor in return down the road. Combined with the complicated morality of your actions, these aspects make you consider your decisions more carefully than you otherwise might have.

It also helps a great deal that Max Gladstone’s writing is a treat to read. His characters are a little thin, some of them serving as little more than cardboard cut-outs, but the way he describes his unusual world really drew me in. There are a lot of fantastical elements in play here, but this still felt like an actual place with its own particular issues and routines. Moreover, you can tell this isn’t the only place in this world. What you’re doing has serious consequences for Dresediel Lex, but anything you do for its sake has an obvious pull on at least one of the neighboring cultures. I also have to give some serious credit to how well-balanced the central dilemma was written. It’s all too easy to have a premise that seems have two believable sides and still end up writing one as the better side, but I never felt that way here. 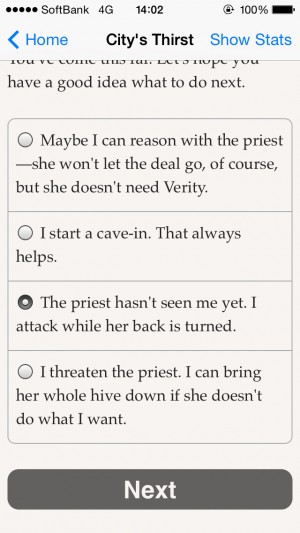 All the usual things about games from Choice Of Games apply here. You can play a variety of combinations of gender and sexual preferences, allowing you to shape your character and their love interests as you see fit. Its presentation consists almost entirely of plain text on a page with radio buttons for making choices. You can check your stats, including the status of your relationships with all of the principle characters, whenever you like. There are a bunch of Game Center achievements to give you additional incentive for exploring the various paths through the game, too.

As far as I’m concerned, the strengths of Deathless: The City’s Thirst outweigh its weaknesses, but it really depends on how much emphasis you put on a story’s overall plot versus its moment-to-moment happenings. This story feels episodic and somewhat unimportant to its world’s greater canon, with the ending feeling particularly flat. Taken on those terms, thanks to being well-written and having an interesting premise, it’s certainly enjoyable enough to play through a few times. It also deserves credit for treating its moral dilemmas with a remarkably even hand, making for some tough choices. That’s one of the best things a piece of interactive fiction can accomplish, I think, and it’s enough for me to at least somewhat recommend The City’s Thirst, particularly to those who have already enjoyed stories set in this world.