I think we can safely say at this point that if Space Marines are your jam, iOS has been good to you. We’ve got what feels like at least a half dozen decent-to-excellent officially licensed Warhammer 40K games spanning a variety of genres, to say nothing of the fine selection of games that homage Games Workshop’s popular franchise. Well, I think we can add one more to that list, and it’s a very fine effort indeed. Templar Battleforce ($9.99) is the latest release from the Trese Brothers, a small development team most well-known for Star Traders (Free), a trading simulation in the vein of Trade Wars and Master Of Orion. Battleforce takes place in the same universe as that game, but it has its sights set on a different genre. Instead of dealing with groups of ships traveling through the galaxy, Battleforce focuses on the Templar Knights, a group of elite warriors whose job is to protect their charges from anything that threatens them. It’s a turn-based strategy RPG, a genre with no shortage of quality entries on iOS, but it manages to make quite a mark anyway.

Technically, this seems to be a sequel. Before making their debut on iOS with Star Traders, the Trese Brothers released a few games on Android using a platform-specific engine. One of them was Templar Assault, a top-down strategy RPG about the Templar Knights. Don’t worry too much about what you’ve missed in terms of story, however. Templar Battleforce follows its own self-contained story, and it’s quite a lengthy one, too. In total, there are 45 missions to play through in the current version of the game, and if I know this developer as well as I think I do, that’s probably not the end of the content. The missions can get pretty long as you work your way through the story, but the game helpfully allows you to leave and come back without losing your progress. 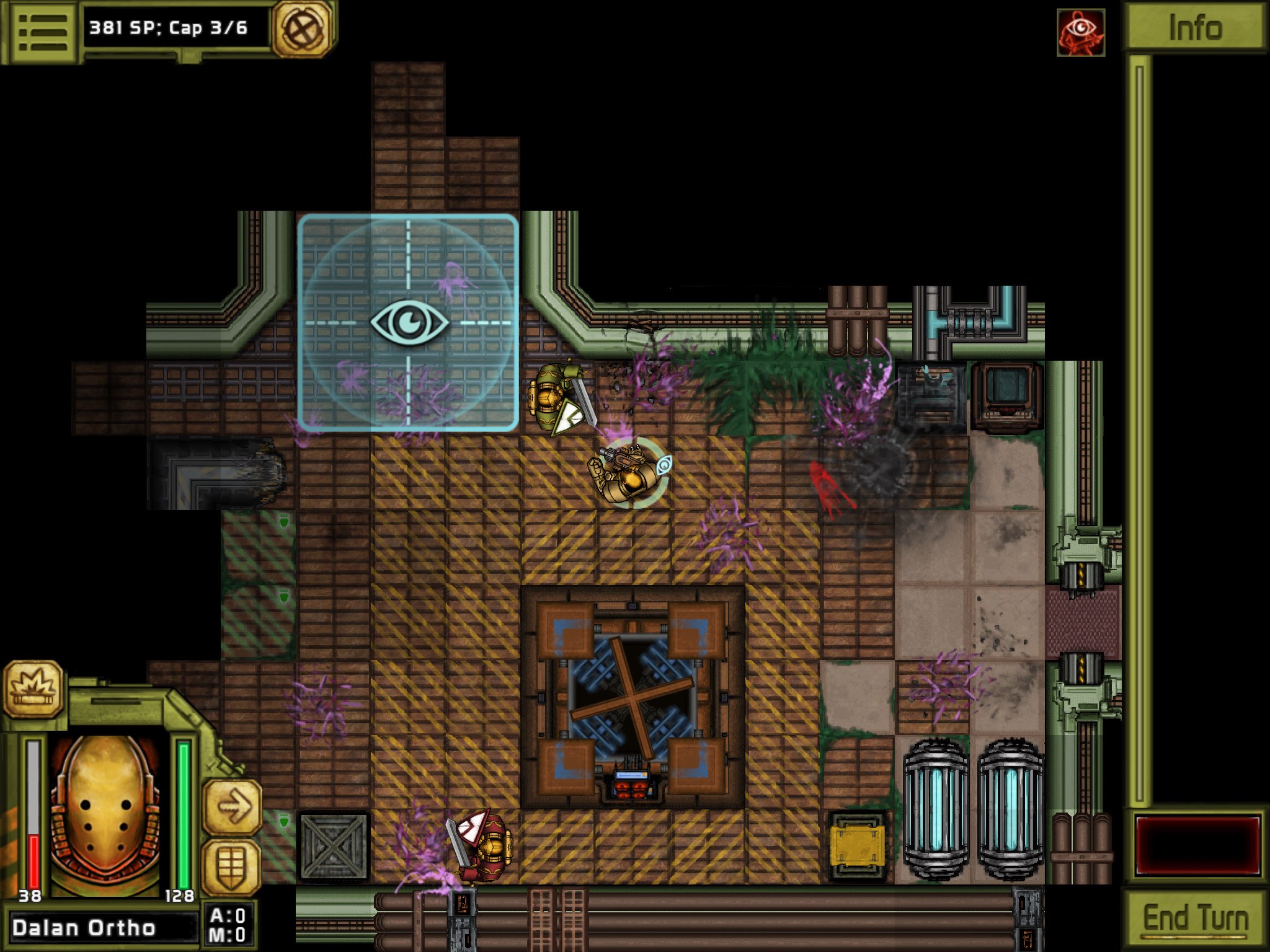 The setting isn’t going to win many awards for originality, as it borrows quite heavily from Warhammer 40K‘s closet. It serves its purpose well enough, however, giving good context to the excellent strategy gameplay. The writing evokes the setting quite well, and there are even a few fun twists along the way. And it is a story, with missions building logically on one another in service to an overarching narrative. That’s something a lot of strategy RPGs on mobile tend to skimp on, so I don’t want to sound like I don’t appreciate it, because I do. The battlegrounds are usually dark and in a state of disrepair, making for fun locations to play in, and if you’ve played the other games that take place in this setting, you’ll certainly enjoy the little references here and there to the wider universe.

While the set dressing is important, the gameplay is the star of the show in Templar Battleforce. Inside of missions, there’s an interesting mix of standard turn-based strategy and resource management. You’ll move your squad members around one at a time, making use of their various skills and trying to do as much as you can with each until their action points run out. Characters can come in a variety of job classes, and the options they’ll have open to them vary. Some can buff up teammates, others can do overwatch moves, while some are simply best at getting in the enemy’s face and causing some damage. Besides taking care of your characters and making sure they don’t bite the dust, though, you’ll also need to set up a sort of base camp in most missions. By capturing a node, you’ll earn resources each turn that can be used to call additional units into battle, upgrade the node in some way, and so on. You’ll have to protect it, however, because if an enemy hits it enough, they’ll be able to capture it away from you.

You’ll be tasked with a variety of goals from mission to mission, but the maps tend to be exploration-heavy and encourage you to split up your forces, a dangerous proposition that pushes you away from turtling up and increases the excitement of the game. The focus on having you move around also makes it harder to defend any nodes you’ve secured. You never quite have enough muscle to go around, which can lead to some pretty wild situations at times. The more quickly and efficiently you clear a mission, the more requisition points you’ll earn. You’ll want as many of these as possible, I assure you. Given the relatively large number of missions in the game, I’m quite impressed with the scenario designs. There’s a good mix on display here, and very few duds. The terrain isn’t just superficial, either. Certain points on the map will offer greater protection from attacks, or offer you an attack bonus. It’s great if you can take advantage of those points with your squad, but it’s even more important to keep the enemy from using them. 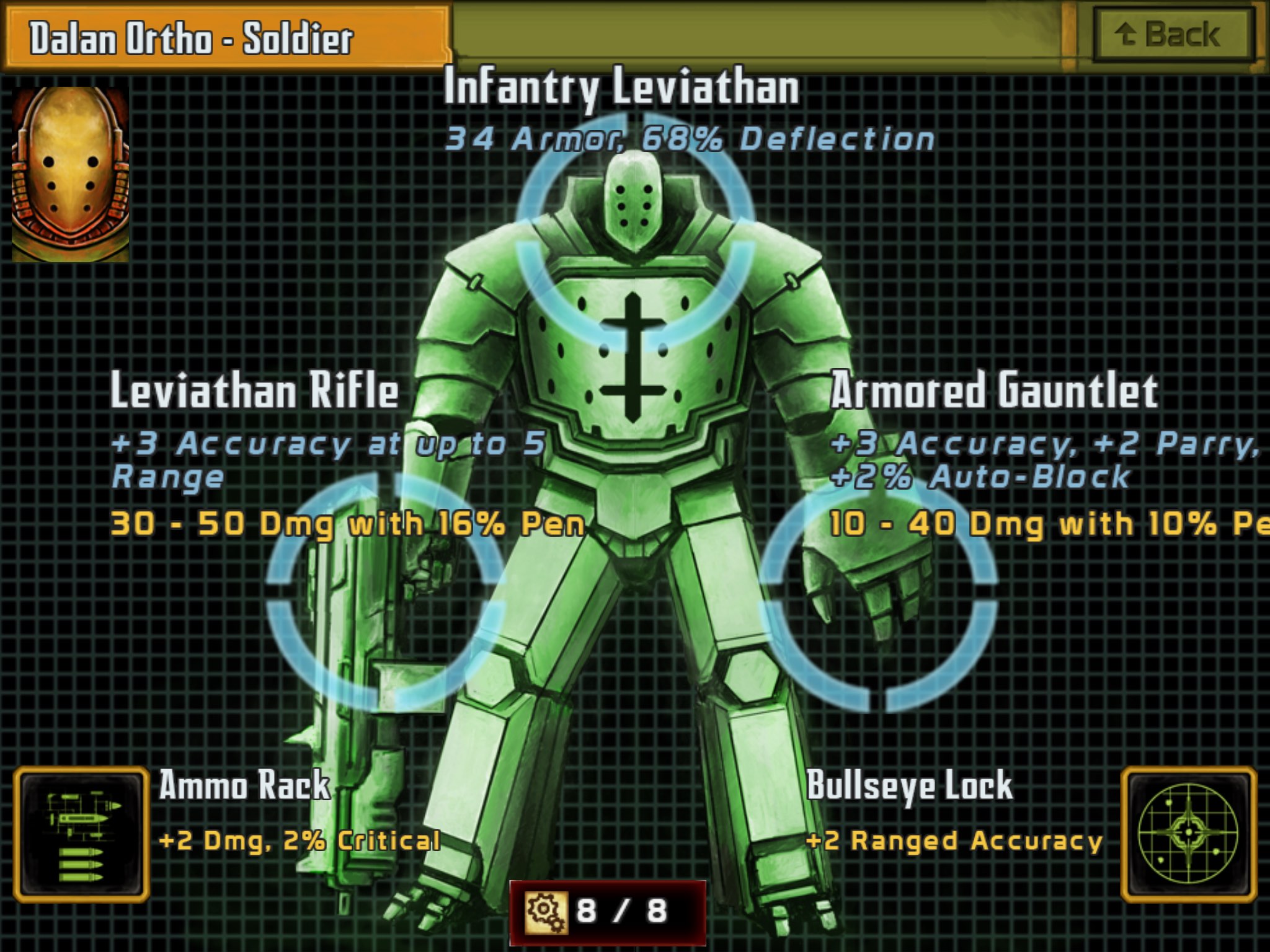 Now, about those requisition points. Between missions, you’re able to play around with your squad a bit. If they’ve earned enough experience points to level up, you’ll have some points to assign to various stats, skills, and so on. You might also have some gear points to allocate to improve their equipment. The requisition points, however, benefit your whole squad rather than specific members. There’s a giant tree of improvements, new abilities, and even new types of Knights to open up with those points you’ve earned. You’re not going to have enough of them to unlock everything, so you’ll have to make some important choices about how you want your squad to develop. It’s enough to make a strategy fan’s heart go aflutter, but it’s also presented in a clear and straightforward enough way that it shouldn’t scare a newcomer too much. Between all of the different ways you can customize your team, it’s pretty unlikely any two players are going to end up with similar teams by the end of the game.

Having reviewed a couple of games from the Trese Brothers before, two things have always stood out to me. First, their games are typically very rough when they launch. Second, I’m not sure I’ve seen any developer push out updates as frequently and numerous as they do, which often goes a long way towards alleviating the former issue. Well, I’ve no doubt the Trese Brothers will do their usual job updating this game, since they’ve already got at least one in the queue with Apple as I write this. The more surprising thing this time around is just how polished this initial release is. Even the visuals, which in Trese games have always looked a little amateur, turned out great here. It’s not in spiffy 3D like Warhammer 40K Deathwatch ($1.99), but its detailed 2D art is a big step above what we’ve seen from this developer before.

I also like how considerate of the player Templar Battleforce is in general. There are several different difficulty settings, accommodating players ranging from people who enjoy a casual experience all the way up to the hardcore players who drink permadeath like fine wine. The great thing is, the game is perfectly transparent about what each difficulty setting brings to the table, so you don’t have to try to guess by vague descriptions. For players who worry about making bad decisions developing their characters, the game allows respecs so that you can reassign points. Explanations for just about everything are right at the tip of your fingers, and you can skip any and all explanations and story sequences, if you’d prefer. If you’re starting a new game, you can choose to skip the initial set of tutorial missions so that you don’t have to replay the slower stuff each time. The enemy turns, a usual sticking point in strategy games, are relatively quick and apparently about to get quicker when the next update hits. It’s all very thoughtfully designed. 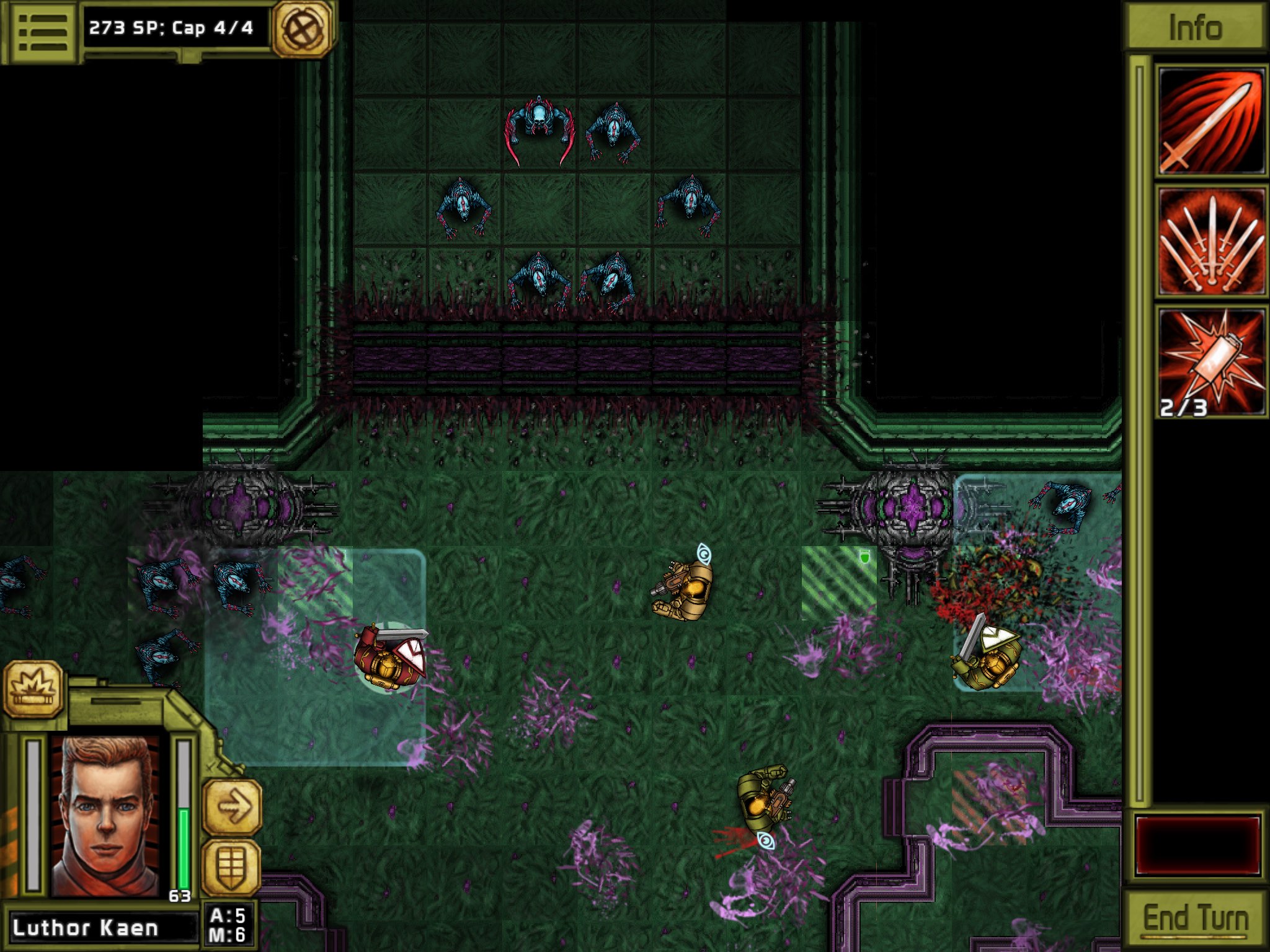 That’s not surprising for the Trese Brothers, however. I always get the impression that they’ve carefully planned out the details of each of their games. But I feel like this is the first time where the initial execution has matched that design effort for this team, and the results are simply fantastic. Templar Battleforce is an easy recommendation to any strategy fan, even if the setting doesn’t do much for you. If you are into this type of space-faring ooh-rah, on the other hand, you’re going to be on cloud nine.