If you like complex board games on mobile, you should run to the App Store and download Steam: Rails to Riches ($4.99), the re-theming of Age of Steam that has just landed on iOS (it’s been an Android for a few weeks now). If you aren’t aware of this game, it’s a challenging board game designed by Martin Wallace and published in 2009. Your primary goal is to build railroads and deliver goods along a constantly-changing network of tracks and stations. As you can imagine, you’ll need to balance your need to expand and build more rail networks while taking care not to over-extend (the eternal conundrum of all robber-barons). The game was a 2010 Lys Passione Winner, 2010 Nederlandse Spellenprijs Nominee, and 2009 Golden Geek Best Gamers’ Board Game Nominee. So as you can imagine, this is a must-have if you like good board games or have ever played with toy trains. 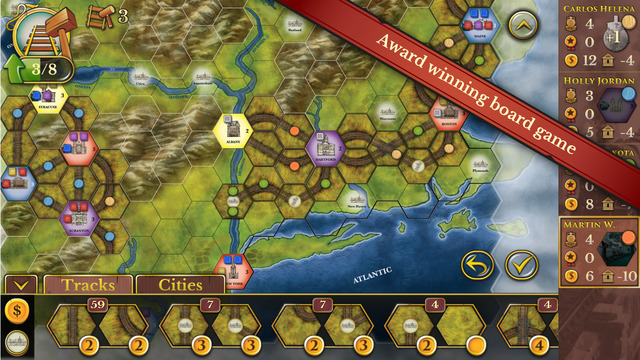 The game comes with original artwork, in-game interactive tutorial, 3 levels of AI with individual strategies, 3-5 player maps, and so on. As you can see, the game right now only has Pass-and-Play, but the good news is that in the iTunes description, online multiplayer is listed as “coming soon" along with online leaderboards, achievements, and new 2-6 player maps. I like my board games multiplayer and as social as possible, so hopefully there will be some type of chat implemented in the game in future updates. The game costs $6.99, and it’s a universal app.