One of the nice things about PC gaming is the ability to use your own custom hardware, and that includes sound, especially for headphone users. If you use headphones that require a headphone amplifier, want higher-quality sound through an external digital-to-analog converter, or virtual surround through headphones, there are numerous solutions for that!. Even on consoles, you have some options available through hardware solutions and increased compatibility with USB sound devices. But for mobile, it’s pretty much been the headphone output port and the limited options iOS gives you. You could get line-out audio through the dock port and run it to a headphone amp, but any advanced audio beyond then might require being tethered to a desktop.

Enter the Creative Sound Blaster E5. After messing around with the Yamaha AG03, seeing what cheap cables could do, I developed a taste for higher-quality audio after seeing the issues that cheap components could bring in, and it sent me down an audiophile rabbit hole. I think I was going to just buy a decent-quality headset at some point for streaming, and I still haven’t gotten that. But I have this thing now, and it’s pretty cool, though definitely a luxury item at its $200 price point. 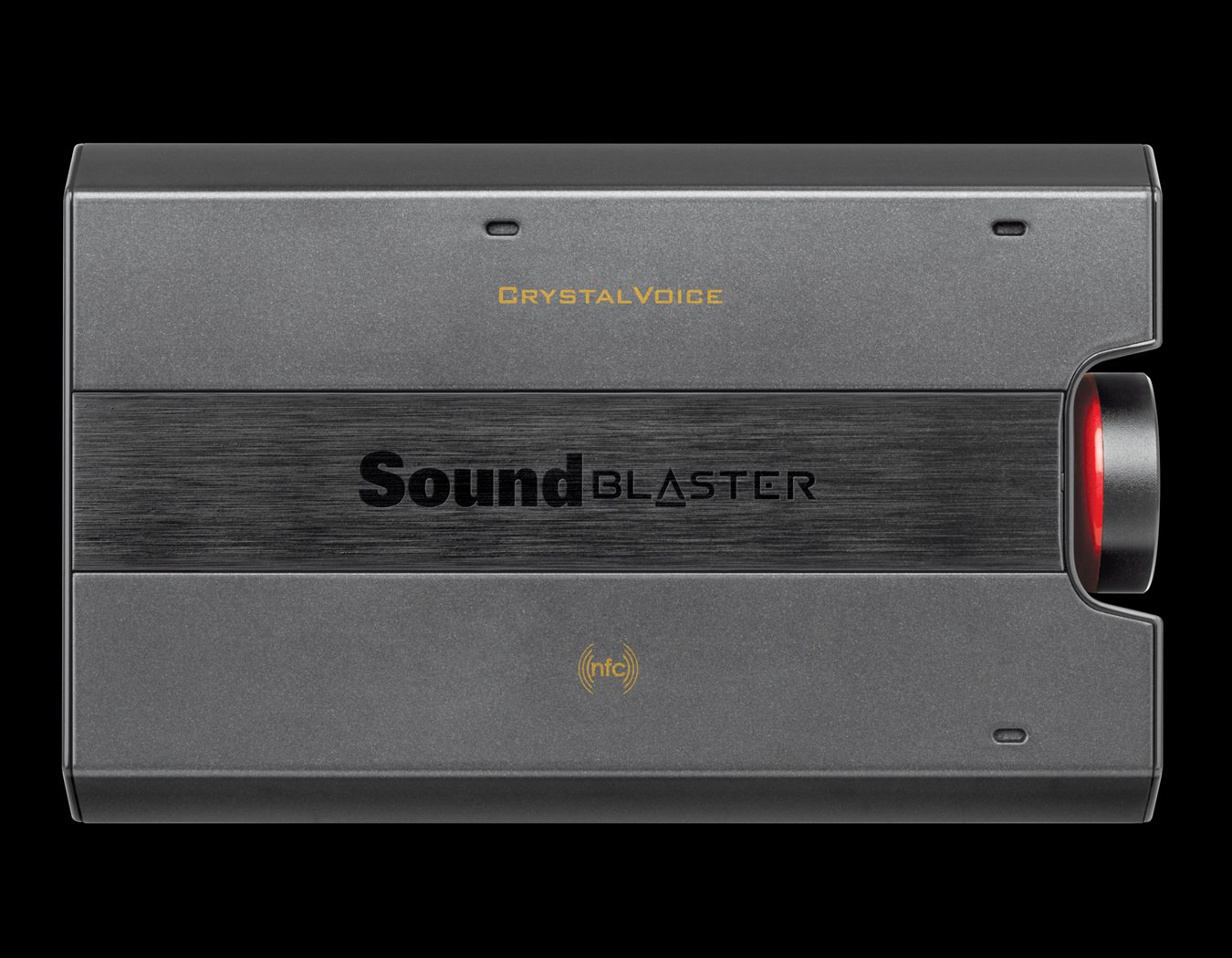 Ostensibly, this is designed as a portable headphone amplifier and digital-to-analog converter. See, in iOS 7, Apple enabled Lightning devices to send digital audio straight through the Lightning cable to a device. What this means is that portable amplifiers could connect to an iOS device and get an untouched digital audio stream straight from the device, bypassing the iOS device’s digital-to-analog converter (DAC) entirely, allowing for higher-quality individual components to be used.

The Sound Blaster E5 might not be the highest quality portable DAC and amp you can buy just for the money, as you can find ones just focused on audio and not on the advanced sound card functions the E5 offers. But to my ears, it’s still an improvement on the iPhone’s headphone output, plus it enables better-than-CD-quality audio if that’s your bag. To be fair, there are experts who say that the iPhone 6 Plus’ DAC in particular is very high quality, and honestly, the difference in audio quality is subtle. It’s there, but you have to listen for it. Plus, you might enjoy the iPhone’s warmer sound than what this provides! Also, this is more of a device for people that are spending at least triple digits on headphones, which I do recommend doing, though there’s some great high quality headphones for the budget-conscious.

But for you, the gamer, there’s a big reason to check out the Sound Blaster E5: it’s basically a standalone gaming soundcard that you can actually use with your iOS device, and it’s battery-powered so you can use it anywhere. See, because this is a self-powered device with its own audio processors, you can use its onboard audio effects with anything you want. The SBX button on the device allows you to enable/disable a bunch of effects. And you can configure them from your iPhone or iPad with the Sound Blaster Central app. 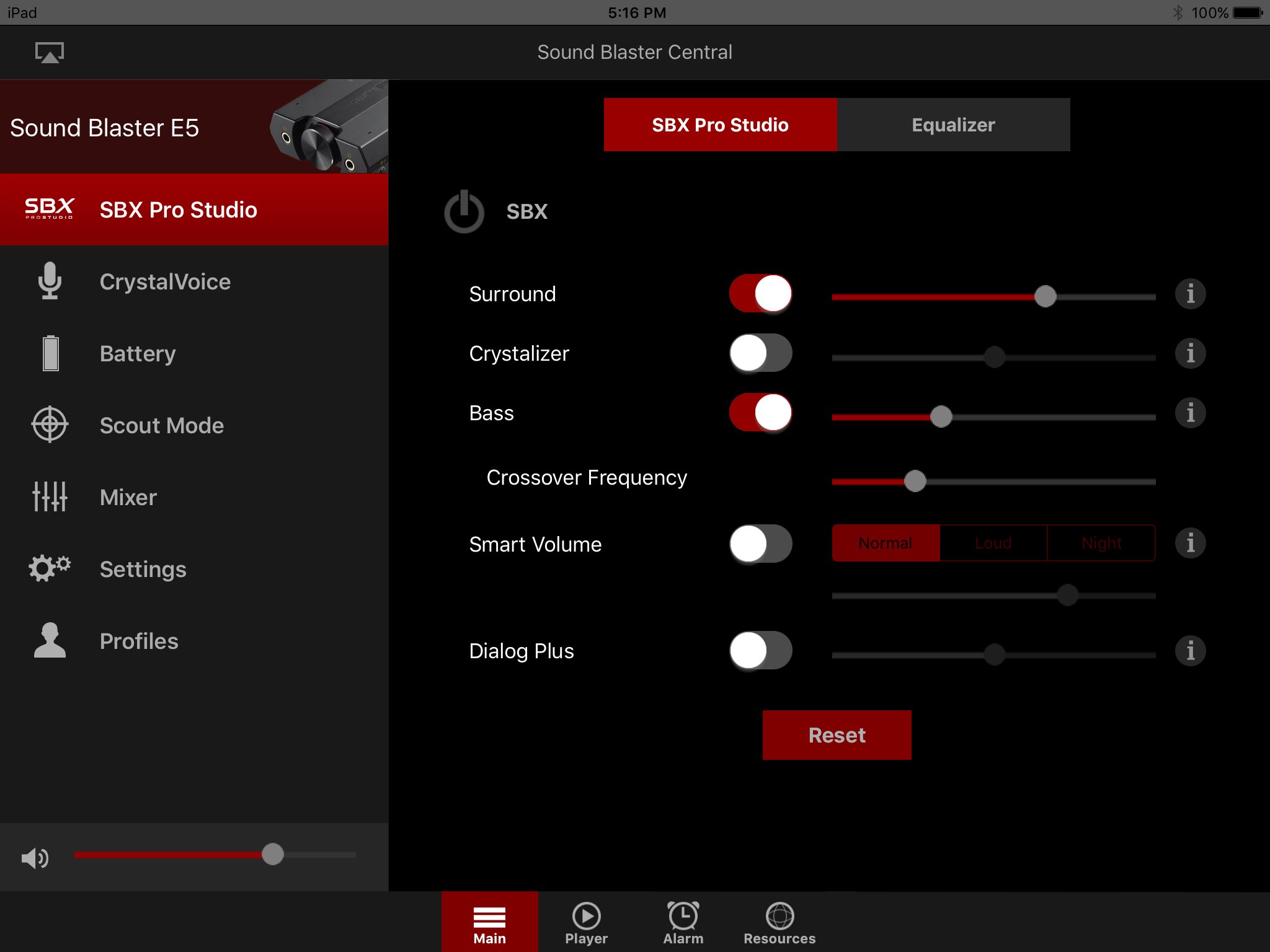 So what can you get besides higher-quality sound? Well, you can enable virtual surround, which is great for 3D games. It really enhances the atmosphere. While you’re not generating a virtual surround effect from a surround sound audio source (the E5 doesn’t support Dolby Digital decoding from its input, which supports Toslink audio input along with 3.5mm line level or microphone input), it’s still possible to generate a surround effect from a 2-channel source. And for 3D games in particular, it can be incredibly immersive, though it does suffer a bit from not having actual surround sound input of 5 or more audio channels. You also have the ability to use Scout Mode, which modifies the sound so that you can hear far-off sounds in the distance, like enemy footsteps, which can be enabled by double-tapping the SBX button. Want a leg up in Modern Combat 5 (Free)? This might be the device you need.

There are a few other things you can do with this. Do you want to play games while listening to music from another device, especially if a game you’re playing doesn’t support music playing while you play it? You can use the line-in port and the mixer functionality (you will need to update the firmware on your E5 to use this and Scout Mode from mobile) and set it to play back. You can also connect an external Bluetooth device and mix in music that way. 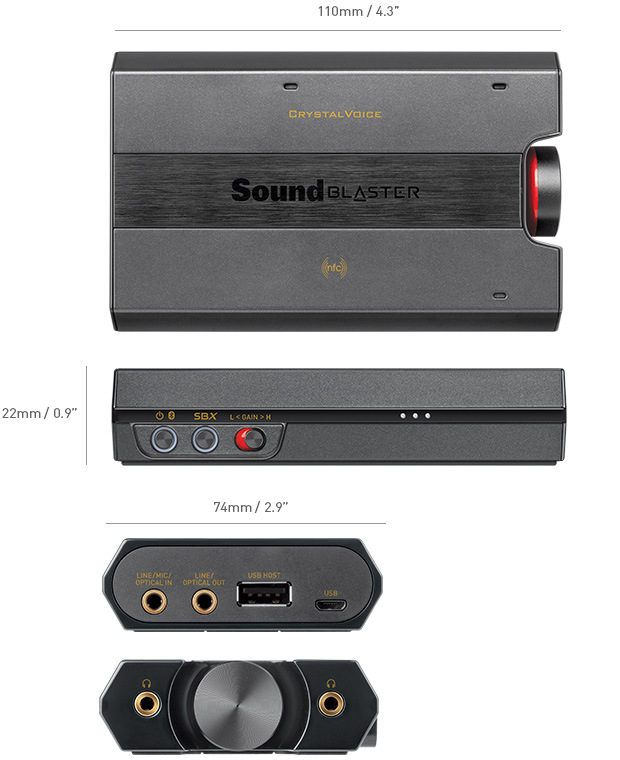 The problem with the Bluetooth on the E5 is that while it supports aptX Low Latency, which is a wonderful technology that should be in every Bluetooth device because it provides high quality and can be used to watch TV or play games with minimal latency between the device and your headphones, it only supports receiving from an aptX Low Latency transmitter. While you could pick up an aptx LL transmitter for a pretty low cost from Amazon, it’d be welcome if it was part of the E5’s bag of tricks. I know that Bluetooth is convenience over quality, but the latency issue is more of a problem than Apple wants to admit.

As far as audio recording goes, you can use this to record stereo line-in sources on your iOS device, but you can also use microphones. There’s CrystalVoice, which includes a suite of functions to use to modify your voice, including the fun-but-useless voice morphers. But the noise cancellation is a killer feature here, as it allows you to remove pesky low-level noise like fans and background din from your microphone in real-time.

One great thing you can do if you have some headphones that don’t have a microphone, that you want to use as a headset, is to pick up a Zalman clip-on microphone, which is a solid cheap mic, but it’s highly sensitive to any nearby noise. Turn on the noise cancellation on your E5, and those problems go away. Echo cancellation and voice focusing is there too, but you don’t want to crank up the effects too much, lest you lose any detail in your voice at all. It’s a savior for me – I work in rooms with fans going, and the noise cancellation along with auto-volume helps out a ton. Still, especially if you’re using something like Discord (Free) on your device and you’re in a noisy environment, this could help immensely. 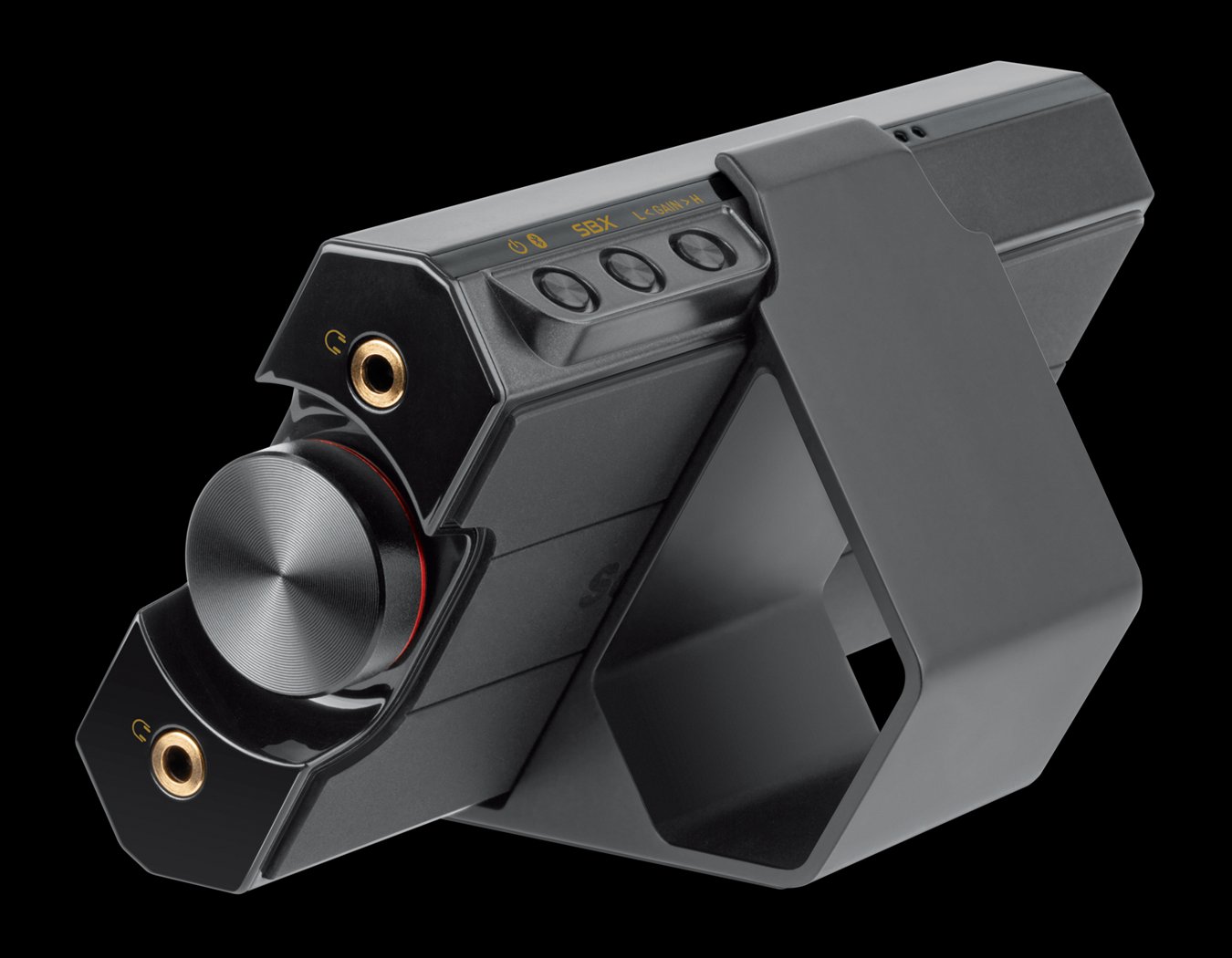 The E5 also has a stereo microphone of decent quality on it, but the CrystalVoice works with an external microphone as well. I do wish that one of the headphone ports supported the TRRS jacks that most iPhone-compatible headsets use to get stereo audio and send the mic signal, as most headset adapters for splitting out to stereo and microphone jacks separately don’t really split out that wide. But hey, it’s an option. The E5 comes with a handy stand for propping up the device, but it can also detect orientation, so if for some reason you use it to hold up the microphones in vertical formation, you can do that. Again, that seems to be a theme with the E5 – I don’t know which use cases would involve doing that, but it’s there if you’re one of the few people who would!

The Sound Blaster E5 is an audio Swiss Army Knife. You might not need all of the features, but you’ll be glad you have them. Most of the use cases should be “plug sound card into computer, phone, or tablet; plug headphones into headphone jack," but if you need 2 output ports, or to listen to an optical source, or to output to an optical receiver, or use your super-fancy headphones with Bluetooth, then this can do that. You’re paying for a lot of functionality here.

The battery life isn’t great – about 8 hours, and the recharging is a bit slow, though you can recharge this while you use your iOS device with it. There is a lot going on under the hood here, so I don’t blame it for using a lot of power. Still, as just a portable DAC/amplifier, if you need it just for that, you’re probably better off with other solutions that have better battery life, though nothing really has the combination of features that the E5 has, which is what made it appeal to me in the first place.

Still, the E5 does a lot, and the great thing about it is that it’s something you can take advantage of from your computers, tablets, and phones. While the main purpose of it is to enable you to get higher-quality audio from your device for your good headphones – and trust me, if you’re still using your included earbuds or using Beats, the money you spend on good headphones is worth it if you shop around and buy a good pair that’s good for you – there’s so many other features that you could make use of, particularly for gaming, that it’s worth considering. Is it a luxury item? Sure, it is $200. But as something that’s basically a Swiss Army Knife of high-quality audio, you can get a lot of usage out of it, especially if you use this as your main sound card on pretty much everything you own. And it can do that, including on your iOS devices! And if you do decide to buy high-quality headphones at some point, especially ones that require an amplifier, you’re set here.

I do hope that the E5, while perhaps not intended for explicitly for mobile gamers, will be looked upon as the first mobile sound card. As mobile gaming gets more serious, I think more serious hardware for enthusiasts will find a market – we already see gaming headsets touting mobile compatibility – but equipment like this could become more commonplace down the road. Until then, you have the Sound Blaster E5. It’s a luxury item, and maybe not something you need unless you know you need, but it’s something you can have a lot of fun with, and head down a road toward higher quality audio.