It feels like the design document of Zombie Match Defense (Free) involved putting a bunch of popular App Store things in a bag and shaking liberally. I can’t lie, it’s not a very appealing prospect, mostly because I’ve seen so many games go very wrong with this kind of approach. Happily, this game fares better than most that make the effort, mostly due to not trying to combine too many disparate elements. Essentially, it’s got the whole zombie-themed lane-based defense gameplay as seen in Plants Vs. Zombies ($0.99), mixed in with a turn-based match-3 puzzle game as seen in roughly 23,000 other games on the App Store.  It blends together quite nicely, and the result certainly feels distinct from its inspirations, so it avoids two of the bigger pitfalls of genre mash-ups. Ultimately, what keeps Zombie Match Defense from being as good as it ought to be is also quite common: it has a good concept, but doesn’t do enough with it.

There are five lanes, each with scientists and doors at the left side of the screen. Zombies will spawn from the right side of the screen. There are assorted brains filling the lanes, and each turn, you can swap one brain with an adjacent one. If you match three or more, they disappear. Each time you make a move, the zombies will move ahead one step, and if they reach the left-hand side, they’ll eat the scientists and open the door. If a second zombie makes it through that open door, you lose. If you match a brain that a zombie is currently munching on, you’ll damage them. All but one of the four types of zombies will go down with a single match, with the other type requiring two matches. When you beat a level, you’ll earn some zombucks, which can be used to unlock power-ups. Once you’ve unlocked and equipped a power-up, you can earn them in levels by performing special matches. You can then use the power-up from your inventory whenever you’d like. 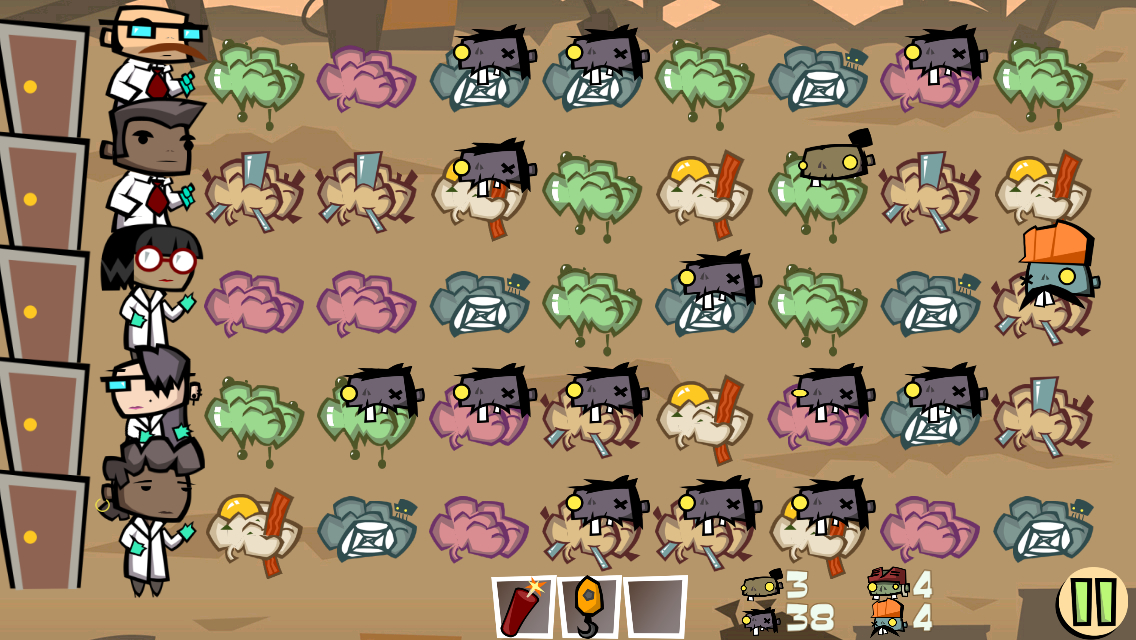 The story mode is broken up into four areas with five levels each. A new zombie type is introduced in each area. In the story mode, you’ll only ever see a mix of the regular zombies and whichever zombie comes from that area. The regular zombie moves straight ahead one space per turn and can be cleared in a single match. The second area’s hockey zombie is similar, but can move diagonally forward. The third area’s zombie only moves forward, but if it’s munching on a brain, you won’t be able to move it, so you’ll have to bring the match to it. The last zombie type wears a hard helmet, allowing it to take an extra hit. Beating this initial set of 20 levels is a breeze. You’ll unlock a hard mode once you’ve beaten the regular set, offering a more enjoyable level of challenge. Once you’ve got the hang of the game, though, even hard mode isn’t terribly difficult.

For me, the zesty part of the game is the infinite mode. You can choose to run this with no items and regular zombies only, which is certainly the easiest way to go. But it’s a lot more fun to play with items turned on and all four zombie types in play. It’s really tough, but it also shows the game’s true potential, I feel. Having to keep track of each zombie type’s peculiarities is simple when they’re isolated, but when they’re mixed together, you really have to carefully consider each and every move. When you finally do lose, you’ll earn some medals that you can exchange for new scientists. It feels a bit underdeveloped, but I think it’s easily the best part of Zombie Match Defense. 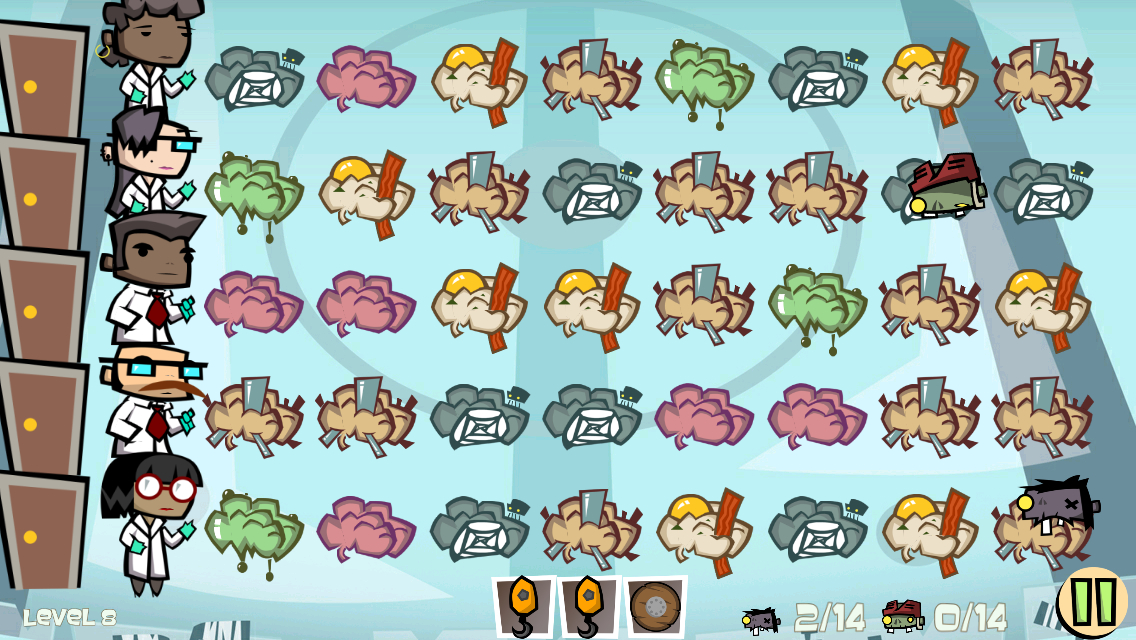 While the overall package feels a bit light, I can’t argue with the presentation. The visuals are stylish and distinct, and the music hits just the right sort of kooky 1950s sci-fi tone. The UI is sensible and easy to use, and Game Center leaderboards and achievements have been included. The achievements are a nice mix of straightforward and vague, and they’re well-designed, with lots of attainable challenges that will still test you. They’re something extra to shoot for in a game that shows all of its cards a little too quickly, so I’m glad they’re done well.

That’s kind of the theme with Zombie Match Defense. What’s here is good, and it feels very polished, but there’s just not enough content or complexity when compared to its competition. There’s not much here on the whole to chew on, and it feels like half of what is here is just the game teaching you how to play. It’s a solid foundation, and the infinite mode will ensure that you’ve got something to come back to for a while, especially if you want to unlock all of the scientists. I would have loved to have seen more zombie types, and maybe more to do with the zombucks earned by playing through the story mode. I definitely would have liked to have seen more stages. It’s just a little too insubstantial on the whole for me to give it a really strong recommendation.