Beat ’em ups were the perfect way to pass the time back in the day. They were simple in nature, often two players, and despite their mindless core, were often some of the most fun games on any individual platform. There’s hardly any nuances to the gameplay for most of them — you basically just need to dodge slightly and attack when there’s an opening — but the linear nature is a nice break if you’re looking to relax. That’s sort of the same feeling that Leave Me Alone ($2.99) left me with, but it has its own signature personality as well.

While most brawlers have a similar dystopian city feel, Leave Me Alone is a tad different. This game takes place in the 80s, where cellphones are widely used, and delinquency is king. The main character isn’t necessarily a hero hell-bent on saving the mayor’s daughter or the town from peril, he simply wants to be left alone after skipping school. His mom even calls him and threatens him with poop emoji — it’s bizarre, but I dig it, especially the punk and glam rock flair that’s pervasive throughout. 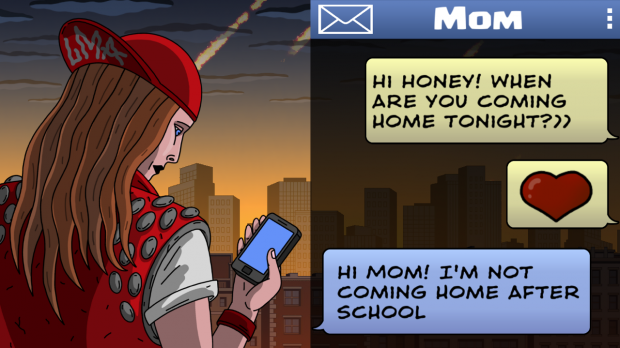 The art style is the first thing that popped out to me, as it follows the same scheme as many classic metal albums, like basically anything from Iron Maiden. While the main character’s model or even most of the stages aren’t all that impressive, the enemies are memorable, particularly the bosses, which are the most detailed aspect of the entire affair. Heck, even the basic UI touches are wonderfully drawn, like the demonic life meter.

Your job is to basically beat up everything in sight, which you’ll be able to accomplish by way of a simple on-screen button system. In addition to controls for left and right movement there’s three buttons for attacking, jumping, and riding your skateboard. Pressing the latter while riding will place you on foot, ready to pummel anything in sight.

It’s all very user friendly, and you won’t need to learn any advanced mechanics or fancy fingerwork to do well. Where the skateboarding system shines are the platforming sections, where you’ll have to navigate various hazards that wouldn’t normally be possible to tackle on foot. While the combat sections do have a tendency to blend together, especially during the middle of the story, these segments break things up a bit. Still, don’t expect a whole lot outside of the typical brawler formula. 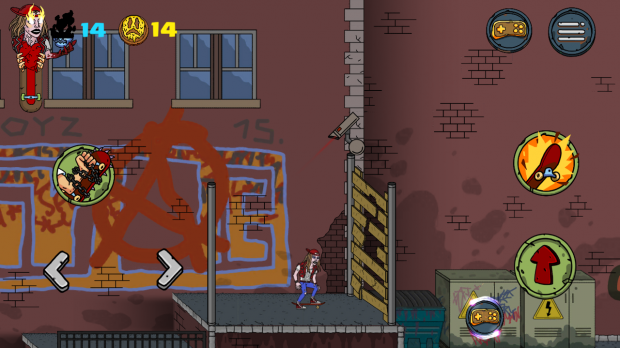 Just like a classic retro game, you’re getting everything for your $2.99 purchase. It’s a complete experience with 21 levels, and items aren’t gated behind microtransactions. There’s also a light RPG-like system that involves standard health upgrades, as well as small-time skills and powers. While there is a hardcore mode that makes the game tougher, I would have really preferred an endless gametype that involved randomly generated levels and enemies.

If you’re into the genre, Leave Me Alone is a great way to relive the glory days on your mobile device. Sure it’s not as polished as a lot of other titles, but the gameplay is there, and the power to quickly skate around and fight at will is a neat conceit.