How difficult do you like your games? Do you like them punishingly difficult, to where you will have to play a level dozens of times in order to beat it? Congratulations, Astra ($0.99), a level-based orbital platformer, is for you. It’s fun to play and features some of my favorte mechanics in orbital platformers. Here, you run around a planet and jump to other planets to make it through the levels, bopping enemies and nabbing collectibles on the way. I tend to not be the biggest fan of orbital games at times, because I find it difficult to be accurate with launching off to where you want to go. I get that’s kind of the point, but sometimes I struggle to have fun with these games. But I enjoyed the way Astra‘s orbital platforming works.

You mostly just launch in a straight line from where you jump off once you escape gravity. You can never wind up lost in space, you always will wind up back on a planet somewhere. It’s not always about jumping from planet to planet, you have things to do on individual planetary bodies, with plenty of enemies to defeat, too. It feels a lot more fun and forgiving than most games of this type, because when you combine the orbital angles with the auto-running, you have a lot of factors getting in your way to being accurate. This is a very friendly game to play, one of the friendliest in the orbital platformer genre. 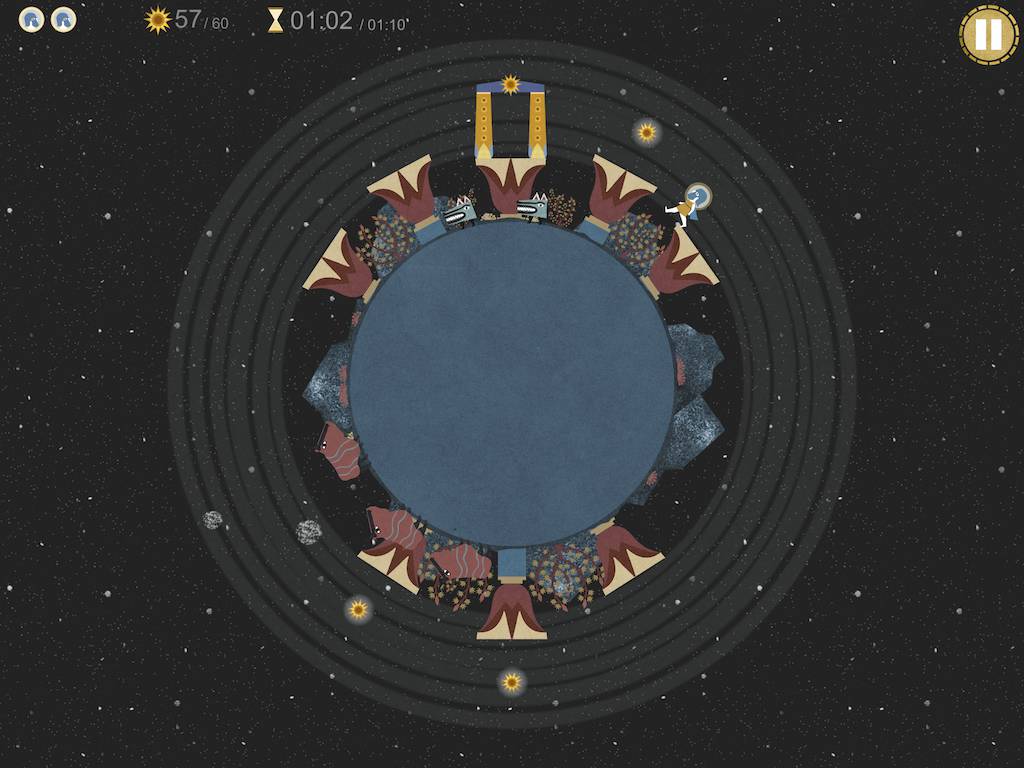 That’s a good thing, because holy hell is this game difficult. I don’t mean “it’s difficult to get 3 stars" or “it’s difficult to get a high score," I mean, “it’s difficult to even beat a level, much less get the equivalent of 3 stars on a level." There aren’t any checkpoints, but the levels are generally short enough that they don’t need them, necessarily. I mean, I want them so that I feel less inadequate, but they don’t really need checkpoints. The game will test you, as it throws many circumstances where your odds of surviving them without taking damage is very slim.

Sometimes, this difficulty can be frustrating: it can be easy to wind up taking unexpected damage when you’re landing on a planet. If you’re not directly landing on it and into orbit, I’ve taken damage from exiting the spin state too soon. And every point of damage is deadly because it’s limited and impossible to earn back. And it’s especially a bummer if you are going for the medal for no damage taken. So you really have to be smart while playing this. And in going for time, you have to learn the ideal path, as you have some openness to the levels. 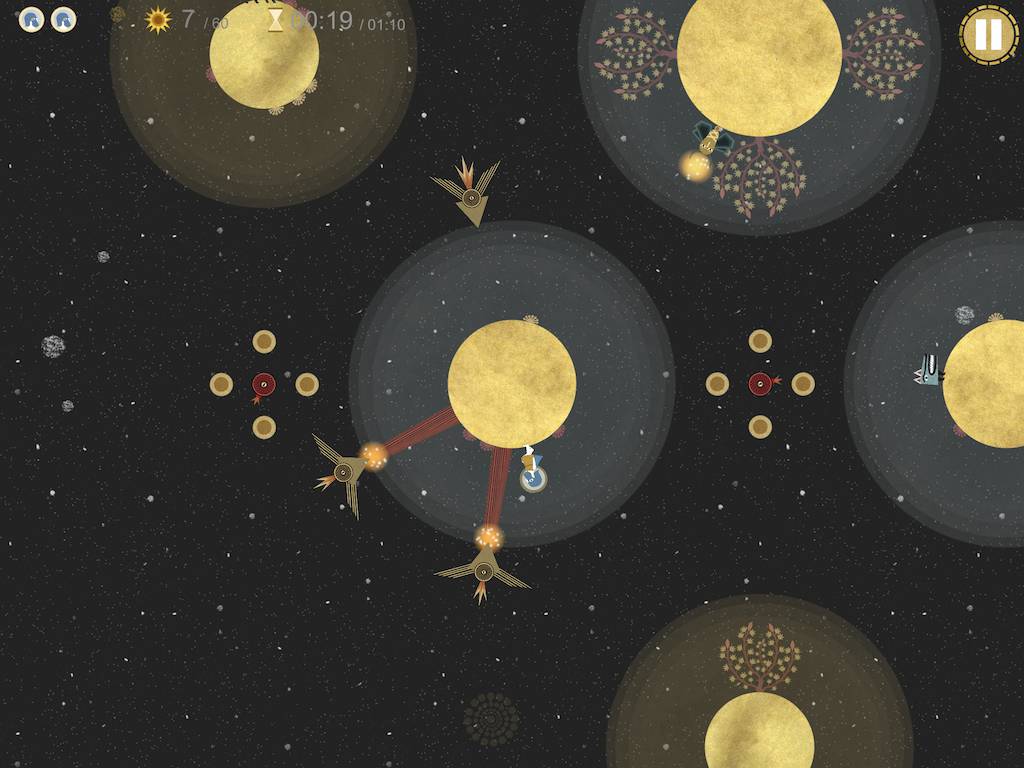 But it’s that openness that is part of what makes the game so inspired. It gives you mechanics that are easy enough to use, then it forces you to learn how to use them to their maximum potential. It will test you, it will challenge you, it will force you again and again to be good, because if you’re not good, then you can’t progress. You have to be great in order to get any kind of success beyond just completing the levels. Heck, you have to be great to beat the game. You have to be exceptional in order to get 100% at Astra.

Whether you enjoy it or not will depend on your taste for extremely difficult games, because this will test you. And most of the length is centered around repetition and trying to beat it again and again. It’s definitely an old-school difficulty, where games used to pad their length by being hard to play. There’s not really that many levels here! Many modern difficult games go for more of the “difficult systems" approach, a la Downwell ($2.99), Spelunky, and many roguelikes. This does involve learning and skill, but also memorizing how the levels work. And repeating them until you get things right. It’s definitely a taste that only a certain audience will get. If you’re a fan of retro games, or grew up in the era of intense challenge, you’ll be more likely to enjoy this. If you’re cut from a more modern cloth, this might not be for you. 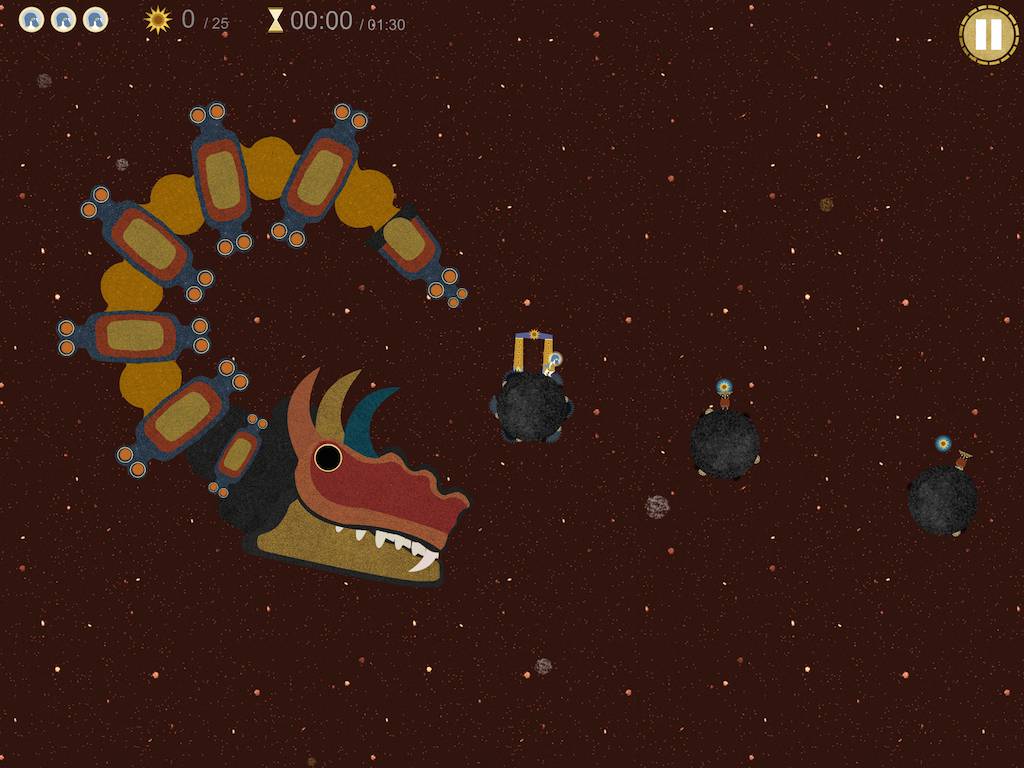 I will say that Astra is artistically great, though. The game’s flat visual style, resembling Greek wall art to a certain degree, is an inspired choice. It’s a unique look that shows some inspiration, but stands out on its own. And the dark soundtrack is stark but a perfect fit for the brutal nature of the game. I like pixel art and chiptunes, but one cannot subsist on those alone.

Really, Astra stands out among other orbital platformers for its unique art and great feel. But it is a trying game, and one that caused me to quit constantly and go play something else, to the point that it was difficult to proceed. But that made the successes more rewarding, and it’s long way to the top, that’s for sure.