I think the games as art debate is pretty much done in my view. Yes, games can be art, and in their own unique way, provide us with an alternate viewpoint that can enrich us both spiritually and culturally. While Lunar Flowers (Free) isn’t exactly a life-changing event, it’s a pretty fun little game, and a beautiful work of art.

First off, nothing is muddled with any additional IAP or ad placement. You’re getting the entire shebang here with Lunar Flowers, and it’s all the better for it. Wielding a wonderful style that reminds me vaguely of Monument Valley (but with its own flair), it’s incredibly easy to get into Lunar right from the start. I mean, this presentation is right up there with some of the best apps on the market. 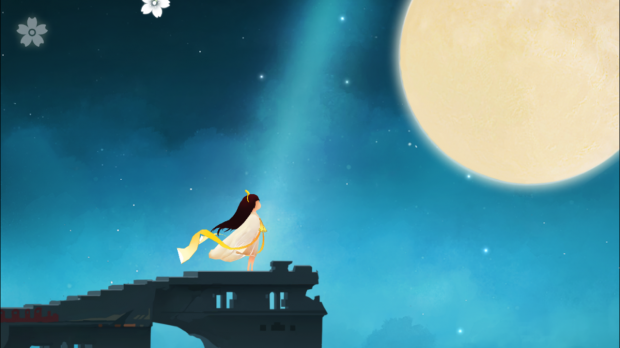 So what is Lunar Flowers? It’s a puzzle game, with a clever integration of in-game cutscenes to move the story forward. In short, you’ll be pressing on as the main character in a whimsical fashion, dashing over the stars and riding a dragon in the sky, while you solve manageable brain teasers. It’s not something you’ll need more than a few minutes to wrap your head around.

These sections involved tracing across the screen to create a pattern, and it’s as simple as dragging your finger in a line. At first it’s really easy and almost maddeningly trite, but very quickly Lunar Flowers will ramp up and add multiple patterns to the mix. In the end it never gets to the point where they’re impossible however, and if you’re a fan of difficult puzzles you’ll probably want to pass on this one. Having said that, there are some sections that involve an array of tracing, and if you fail, you’ll have to start that entire section over. So the game definitely isn’t on auto-pilot. 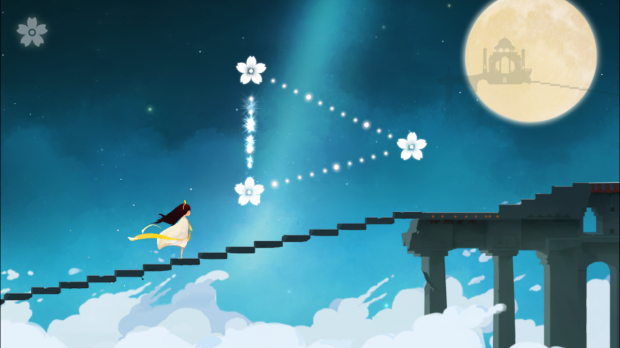 Instead, Lunar Flowers is about the journey. You’ll encounter new characters, locations, and concepts along the way, and all of them play out sort of like an interactive movie. Part of that is due to the overall presentation, including the orchestral score, which really nails the chill feel of the game. Additionally, events will trigger throughout the game that move the story along, even if everything isn’t completely spelled out for you. Part of the fun is completing a section and having no clue as to what you’ll encounter next. I feel like I’ve already spoiled too much talking about the dragon.

There isn’t a whole lot I could say about Lunar Flowers that I haven’t said already. Most of the people out there know that they’re part of the target audience, and the rest, know to avoid it. But for those of you who are looking for something a little different without the pretentiousness and baggage that a few similar experiences bring, Lunar is a great app to pickup for a rainy day.