Like many people here, Wednesday nights are one of my favorite times of the week. Most people probably have one or two games they are anticipating, but the reason I look forward to that evening is because of all the games I don’t know are coming. Often, my favorite game turns out to be one I nearly didn’t even download to begin with. Last week, for me, that game was FRZ: Free Racing Zero (Free) by Fingersoft. I didn’t have much confidence in it based on the title and screenshots, but it actually might be one of the best racers I’ve played in several months. 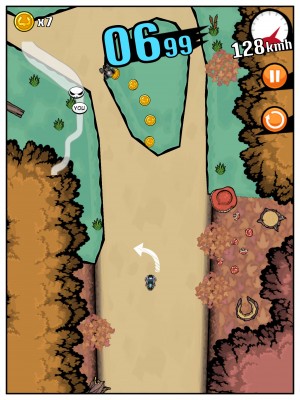 In a lot of ways, FRZ is similar to the wonderful Drift‘n’Drive ($2.99) (which was our Game of the Week last Halloween). They’re both colorful little racers played in portrait, with short, vertical courses that don’t loop. They both have flawless press-either-side-of-screen-to-steer controls. They both have an upgrade system to enhance your car. And, most importantly, they’re both super fun. FRZ is no clone, though, and it changes up the formula in some pretty great ways.

In some ways it’s simpler than Drift. There’s no boost button to worry about, so all you’re controlling is the left and right steering. Don’t get me wrong–boosting was definitely fun, but I’m glad it wasn’t included here as it makes the driving feel a lot more streamlined. More significantly, there aren’t a ton of extra cars bumping into you during each race, as each level sees you only racing a single ghost (with no collisions). Again, I liked that aspect of Drift‘n’Drive, but it could often be super frustrating with so many other bodies pushing you around while you tried desperately to break from the pack. In FRZ, it’s essentially just you versus the track. There’s nothing random here–to win, you just need a good, clean racing line. 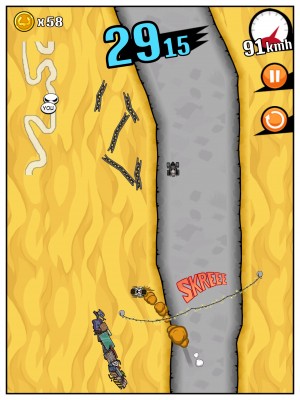 In other ways, it’s more complex than Drift. You have more than one car to choose from here, each with their own distinct strengths and weaknesses (and they each have their own upgrades, of course). There are also tons of different tracks spread across six areas, each set in a specific environment with different hazards to contend with. Best of all, as someone who loves time trial-ing, pretty much everything in the game is ghost-based so you can race other people on the leaderboards or the standard AI.

The game is free-to-play, but–hey, where are you going? Come back! It’s the good kind of free-to-play! There are no timers anywhere so you can play as long as you like. There’s only one currency (used for upgrades and skins), but you won’t have to grind much more than a “premium” game (with one exception, see below). The prices of everything tend to be super generous, and if you’re ever running low on coins you can watch a video ad and get a bunch of them (or sometimes even a free upgrade). If the game had launched without the opt-in ads and they charged money up front I wouldn’t bat an eye–it’s just really well balanced. In fact, I’ve almost completed the career mode already without feeling any pressure to spend real money. (The final car, though, requires a ton of grinding to unlock. However, from what I can tell it’s not needed to finish the game.)

This game hits so many right notes that it’s hard to muster up any complaints, but I’m a cold, heartless game reviewer so I’ll try anyway. I’m not a huge fan of the comic book style visuals (as I said, I almost didn’t even download it). They certainly aren’t bad, and the look works great in the menus, but in-game it just comes across as kind of generic. Also, the cars have a tendency to “steer back” when you finish a drift, which takes a little getting used to. Finally, as great as the ghost racing is, it’d certainly be nice to have a few more multiplayer options (like more players on screen, perhaps).

Those complaints are all really, really minor in the grand scheme of things, though. It really feels like a game they pulled right out of my own head, as it combines many of the things I tend to look for in a racing game on mobile. The tracks are relatively short and easy to jump into at any time, there are a good number of cars with multiple upgrades to work toward, the controls are dead simple (and therefore reliable), there’s a really well-implemented ghost system to encourage yourself to get better and better times, and, most surprising of all, it’s completely free with a super fair economy. There’s really not much else I want in a racing game. See you on the leaderboards!