Thanks to HearthPwn, we have a spy inside Blizzard’s Headquarters, or at least one that’s able to “decrypt" the company’s secret code (not so secret, but I like the whole Bond metaphor here). A couple of months ago, we wrote about how HearthPwn’s datamining revealed references to a possible Hearthstone (Free) Co-Op mode, and now HearthPwn has done the same magic on the most recent patch and unveiled much more info on the upcoming Co-Op Tavern Brawl. We now know that Gearmaster Mechazod will be the Co-Op Tavern Brawl Boss, and he’ll have 95 Health, 2 Attack, a mana cost of 10, and the best mustache I’ve seen recently. He might be a hipster Boss, which makes him even more dangerous. His text states that “Mechazod wins if he defeats either of you!" which clearly points to a Co-Op battle against Hipster guy. 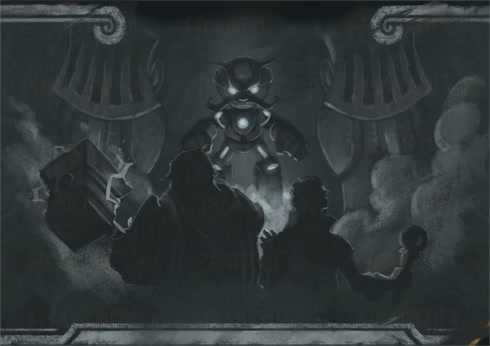 We also have the background for the Brawl which again shows two players against Hipster Boss (sorry, can’t unsee that similarity). Now, I have no idea when this Brawl will be going live or how exactly it will play out, but I’m definitely intrigued. HearthPwn mined some further news from the patch, among them the change that you might be getting the Brawl pack simply by playing rather than winning a Brawl game. Also, there’s a list of new Brawl cards that you might want to check out. That’s all I have for now, but I think that’s plenty. I always say how much I enjoy seeing Blizzard explore new design spaces, so I’m glad to see this new Co-Op idea. We’ll see, of course, how it will play out. 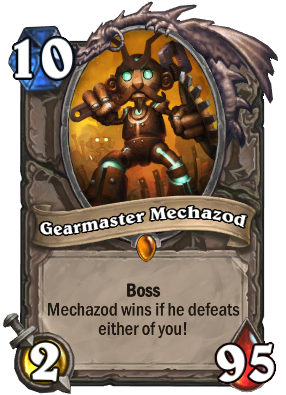