I don’t know about you guys, but my favorite puzzle games are the ones that make me feel like a genius. It’s an extremely delicate balance to achieve, because if the puzzles are too easy, it can feel boring. If they’re too hard, I’m going to feel like an idiot. Somewhere in between those two ends of the spectrum is a sweet spot, and it can be especially tricky to pinpoint since every person is different. Super Sharp ($1.99) hits that sweet spot for me. 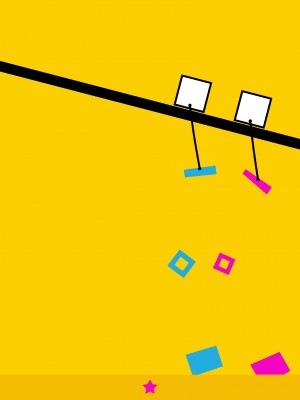 Super Sharp by 1Button is an exceedingly clever little puzzle game that is incredibly easy to pick-up-and-play. Each level presents you with a couple of shapes and a little goal square. All you need to do is touch any part of a shape to the goal square that matches its color, and then the level will be complete and you’ll move on to the next. It may sound simple, and at first it is. Mechanically, all you have to do is drag your finger across the screen to “slice” and then let gravity do the rest, similar to Icebreaker: A Viking Voyage ($0.99).

Things quickly get complicated, though, as you’ll soon be dealing with anti-gravity blocks, spinning contraptions, and colored shapes that must be matched to specific goal squares. It’s actually incredibly impressive how different each level feels, especially since there are over a hundred to solve. For an even greater challenge, you can also try to get the “star” in each level by solving the puzzle in a limited number of moves.

Actually, it can be pretty helpful to check how many moves it takes to star a level since that can often give an idea of what you’re supposed to do. For example, I was momentarily stuck on one puzzle that was basically one long rectangle with a ton of goal squares on either side. I first tried slicing little bits off of it and letting them fall, but it was nearly impossible to hit the goals with any accuracy. I checked the star number and it said it could be solved in just a few moves, and it suddenly hit me: make two diagonal slices down the middle to create a wedge that would split the shape into two pieces, each falling straight down on either side. Perfect! 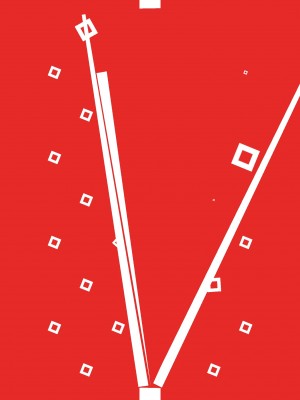 There were countless moments like that during my time with the game, where I’d be trying something that didn’t quite work and would have to stop and think outside the box a bit. It’s a great feeling when it works out, and it really does make you feel a tiny bit smarter. Of course, there are also times when you’ll just be slicing like a drunken fruit ninja until the game’s physics finally have mercy on you and a small piece of a shape happens to hit the goal.

That’s one of the few complaints I have with the game, actually. Some of the puzzles are designed in such a way that you have to be really precise with your cutting and the timing of your cuts, sometimes several times in a row. It can be really frustrating when you keep restarting a level not because you don’t know what to do, but because you do know what to do but just can’t get the timing down. My other beef is that the “touch the top right corner to restart the level” function doesn’t seem to be terribly reliable, and it can make the former complaint even more maddening.

Overall, though, those things are pretty minor. Super Sharp is a superb puzzler that really nails the difficulty curve, gently introducing new ideas and getting you to think in different ways over and over. It can be a tiny bit frustrating later on, but the vast majority of the levels are perfectly solvable if you just stop and think a bit. What more could you want from a puzzle game?