Oh hello there. I didn’t see you come in. I’ve been mildly obsessed with a new game I think you might like. It’s called Subterfuge (Free). Never heard of it? That’s weird, they had this really awesome youtube trailer with a cameo with the Sess’ himself starring as overbearingly condescending guy. It was a really cute premise but I bet you want to know what kind of game warrants a promotion from the Rajah of Reviews, the Sultan of Stars and the King of Critics Adam Sessler. Well, a good one. A really good one. In fact, I am going to spoil this right here and now for those of you who hate reading an entire review, go get this game because it is awesome.

Subterfuge is a social game. Subterfuge is a tactical strategy game. It is all the things that you hate about people that aren’t like you, and if you let it into your life, Subterfuge might just help you be a better gamer. In this game, you face off against a number of opponents on a map with no corners and no safe sides. You have to start talking fast to secure your borders and hope to hell you won’t regret trusting that player that is right next to you. You start off with a small fleet of submarines and a few outposts to your name. Your first order of business is usually taking over neutral outposts to grow your military force and working out who gets what. After that the map starts to shrink tremendously until people begin to get edged out. Compared to most strategy games, its a very intense and claustrophobic experience.

So, seems simple enough right? Unfortunately the game’s in app tutorials are rather… in depth. They present scenarios where there is usually only one specific win condition and if you go in expecting a hand holding, you will probably get a little frustrated. Even though they are labelled “Tactical Puzzles" the byline underneath probably shouldn’t read “an engaging way to learn the rules of the game" because they function very well as a scaling guide to getting into and out of tricky situations, but not very well at all as an introduction to the game. As you can tell from the review score, this game does not really suffer much from this small issue. In fact, it really highlights how little there is to complain about that my chief complaint is how the tutorial is organized. 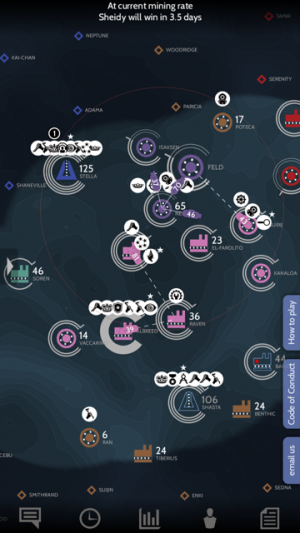 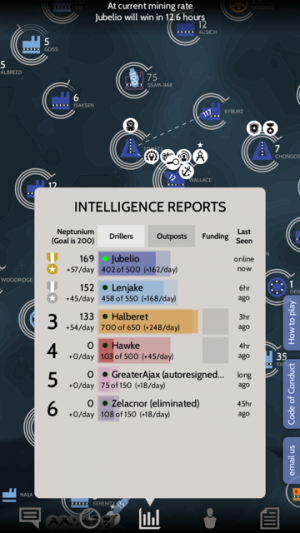 I typed this little mini-guide out for someone who was having some problems getting into the game:

The tutorials make the game seem very difficult (I didn’t even finish the last two) but in 98% of situations all you need to know is the following:

I might expand that out into a full on guide at some point, because I love playing but for now lets get back to the review.

In truth I have nothing else negative to say about this game. While I had some questions for the devs regarding battery consumption and “wolf packing"/multiboxing, Subterfuge dev and World of Goo ($4.99) creator Ron Carmel sent me back assurances that these issues are both already known and being worked out. A 30 fps mode will be available for battery thrifty gamers and we as gamers will be able to browse previous alliances players have made to determine the likelihood of an early game team up. It’s a pretty elegant solution which is not surprising given the developer pedigree and the overall spit polish that went into Subterfuge.

The app sits at about 71 megs on my iPhone 6+ which is about what I would expect from a non-graphics intensive game. There is a single $10 IAP to unlock playing ranked games, playing multiple games at a time, creating games, scheduling multiple future orders and basically keeping the lights on.

It’s late in the review to start talking about game mechanics, but I really love the ability to fast forward in time to schedule and see possible future events. Just like the game overall, it’s clever and will punish you if you try to believe everything you are told. Only things visible in your fog of war will transpire in the fast forward, so always be wary of things you cannot see and always have a back up plan.

Subterfuge is the perfect mobile game for someone looking for an in-depth strategy game you can play for 5 minutes at a time or stare at your phone for 45 minutes plotting schemes and executing flawlessly timed manuevers (you can do that in five minute increments too, to be honest). Over the course of multiple days your games will unfold and alliances will be tested, broken, or gloriously upheld in victory. If you ever wanted to play a ruthlessly social AND tactical strategy game on iOS, this is it.