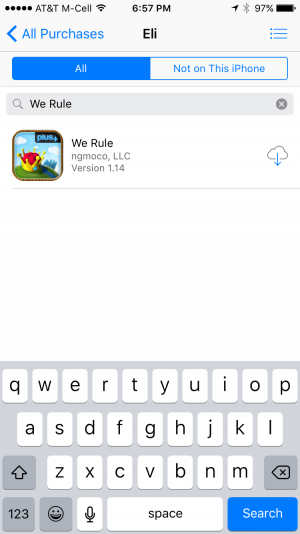 Just as the safety valve on the internet drama pressure cooker that’s been at a rolling boil for the last week was about to pop, it seems many of the games which were previously removed from App Store purchase histories have returned. Pouring through my own purchase history, most of the obvious ancient games like the ngmoco classics, old broken ports like Tony Hawk Pro Skater 2 and more are all back where they should be.

Not all of the games have returned, but it’s important to remember that there’s two degrees of removing apps from the App Store that developers have access to. The first removes it from sale, but still exists for download in purchase histories (which is the case with 99% of apps). The second removes it entirely, which is what developers can use when they want to pull a game completely because it’s broken due to server issues, technical problems, or whatever else.

So, games like Bioshock, Ghost Trick, and other definitively broken games that have fixes on the way still aren’t there, but that’s because those developers are likely using the second option to remove them entirely. This seems like the most logical conclusion to come to, as I can almost promise you no one at DeNA is sitting around playing DJ Hero with the iTunes connect online/offline buttons of their collection of old ngmoco games. (I’d be surprised if anyone over there still had the password.)

Anyway, we’ve still yet to get any kind of official statement from Apple on the matter, but considering the games are flowing back into purchase histories, it seems reasonable to just chalk this up to another App Store SNAFU that was poorly communicated by all parties involved which took too long to fix… Which is sort of a happy ending.