I’ll admit I was a bit dismissive when I first saw the trailer for Jutiful’s AZZL ($2.99). I mean, sure, it looks really well made and has a neat idea at its core, but… it just seems like a children’s game. Ultimately, though, I couldn’t resist the the promise of a colorful, relaxing puzzler and dove in. But should I review it? Would the intelligent and discerning (and quite good looking) readers of this esteemed mobile review site even be interested in something like this? I think they might be, and I hope you’ll (they’ll?) allow me to spend the next seven paragraphs explaining why. 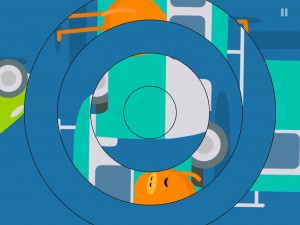 Basically, AZZL is a puzzle game. And by that, I mean it’s a jigsaw puzzle game. Like the kind people used to play with before iPads. Even that “genre” is a bit misleading, though, because you’re usually just sliding the puzzle pieces in two directions or simply tapping to rotate them, rather than digging random shapes out of a jumble and trying to piece them together. It may sound a lot more dumbed down that a traditional physical puzzle, but it works really well and keeps things suitably quick and simple.

The other thing that sets it apart from a jigsaw puzzle is that you’re not working with a single picture that’s been broken up into pieces; rather, you’re actually putting a looping animation together (sort of like the newspapers in the Harry Potter movies. …And books? Question mark?). That’s the game’s main gimmick, I suppose, but it’s a really clever one. Effectively it means that each piece is actually a small fragment of a little cartoon that plays over and over, and it can be surprisingly challenging trying to line these fragments up since they keep changing. 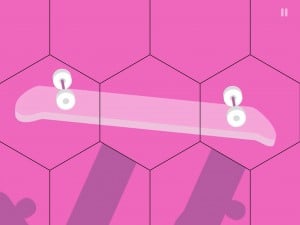 I use the word “challenging” loosely, though, because on the whole the game is really easy. In fact, I hesitate to even call it a game since there isn’t any scoring or leaderboards or anything. You’re just putting puzzles together. At the same time, though, just because it’s super casual doesn’t mean it isn’t fun. I was actually pretty shocked by how fun and engaging it turned out to be, and it can be immensely satisfying as you flip and slide pieces around until a coherent movie starts to form out of the chaos.

To really pull this sort of thing off, though, you need really good presentation. And holy crap, does AZZL deliver on that front. All of the visuals and animations in the game are super slick and colorful, and the whole thing just pops. It’s like a sugary cereal for your eyeballs. Everything is so adorable and happy it almost made me want to barf, but in a good way (question mark?). I’d say that probably 70 percent of the reason this game works is thanks to the character that just oozes from every single screen. 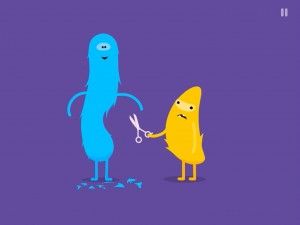 And speaking of character, how about those little movies? Whenever you finish a puzzle, the looping animation expands into a short cartoon with some kind of punchline or visual gag, often turning the original animation on its head. They’re fairly disposable overall (I mean, they’re usually like 4 seconds long), but there are a ton of them and each one is pretty fun. The creatures in these shorts range from what look like fuzzy inflatable tube men to multicolored Mike Wazowskis, and they’re all very rounded and pleasant looking.

And now we’ve arrived at what will probably be the main sticking point for some people: Is the game just for kids? I’d argue that no, the game isn’t just for kids, though it was pretty obviously designed with them in mind. The puzzles are usually pretty simple, short, and colorful, afterall. At the same time, though, I had tons of fun with it. Plus, every once in a while you’ll see a character get brutally murdered by another one. (I’m mostly joking since it’s all done in a very silly, slapstick-y way, but still. Some of those fuzzy little guys ain’t coming back.)

Whether or not AZZL was meant specifically for young kids ultimately doesn’t really matter, though, because in my opinion it completely works as a casual puzzle experience for adults, too. From the visual wit of the short cartoons to the clever moving puzzles themselves, the entire experience is just pure delight. And, I suppose, if you’ve got a few kids running around it’ll be nice for them, too.