Some games do ten things relatively well in an attempt to grab as big an audience as they can; a CCG fighting game with roleplay elements is not unheard of on the App Store. This trend has definitely seen an uptick recently as developers either dip a toe in every possible pool in sight or copy already-successful games such as Clash of Clans. However, you also have games like Raceline CC (Free) which focus on one mechanic and one idea and try to do it as best they can. Raceline CC is all about motorbike drag racing with an emphasis on slip-streaming, and that’s pretty much it. However, while the game has one mechanic throughout the whole game, it is done quite well and proves once more that one idea done very well beats many ideas done relatively well, just as long as you actually like that one idea. So, if you like drag racing games with nice visuals, plenty of small variations on a theme (in the form of various tournaments and championships), and you don’t mind playing mostly in short bursts, then you’ll enjoy Raceline CC. 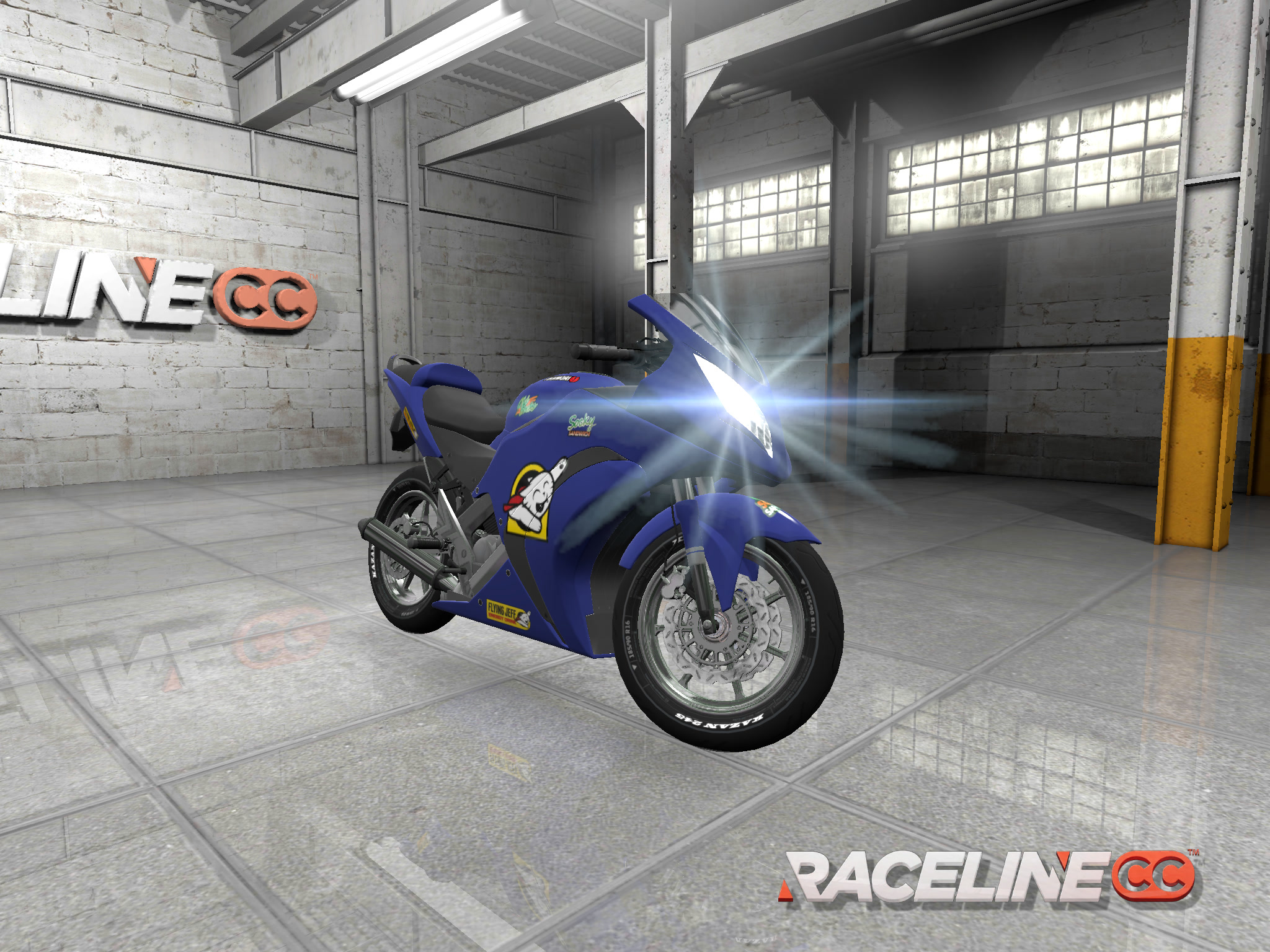 The game’s premise is that you are participating in underground street racing (never heard this scenario before), and you have to gradually rise through the ranks to challenge the best in the business. As is often the case in games of this genre, you’ll constantly need to upgrade your bike by buying and installing various parts and, once you can afford to, buying a faster bike to upgrade and customize. Funnily enough, you can even get sponsors for some extra money, you know, the kind of sponsors who love to have their brand names all over illegal activities. If you’ve played any of the many racing games on the App Store, you pretty much know how Raceline CC will play as its rhythm of racing, upgrading, and then racing again is a staple of this genre. 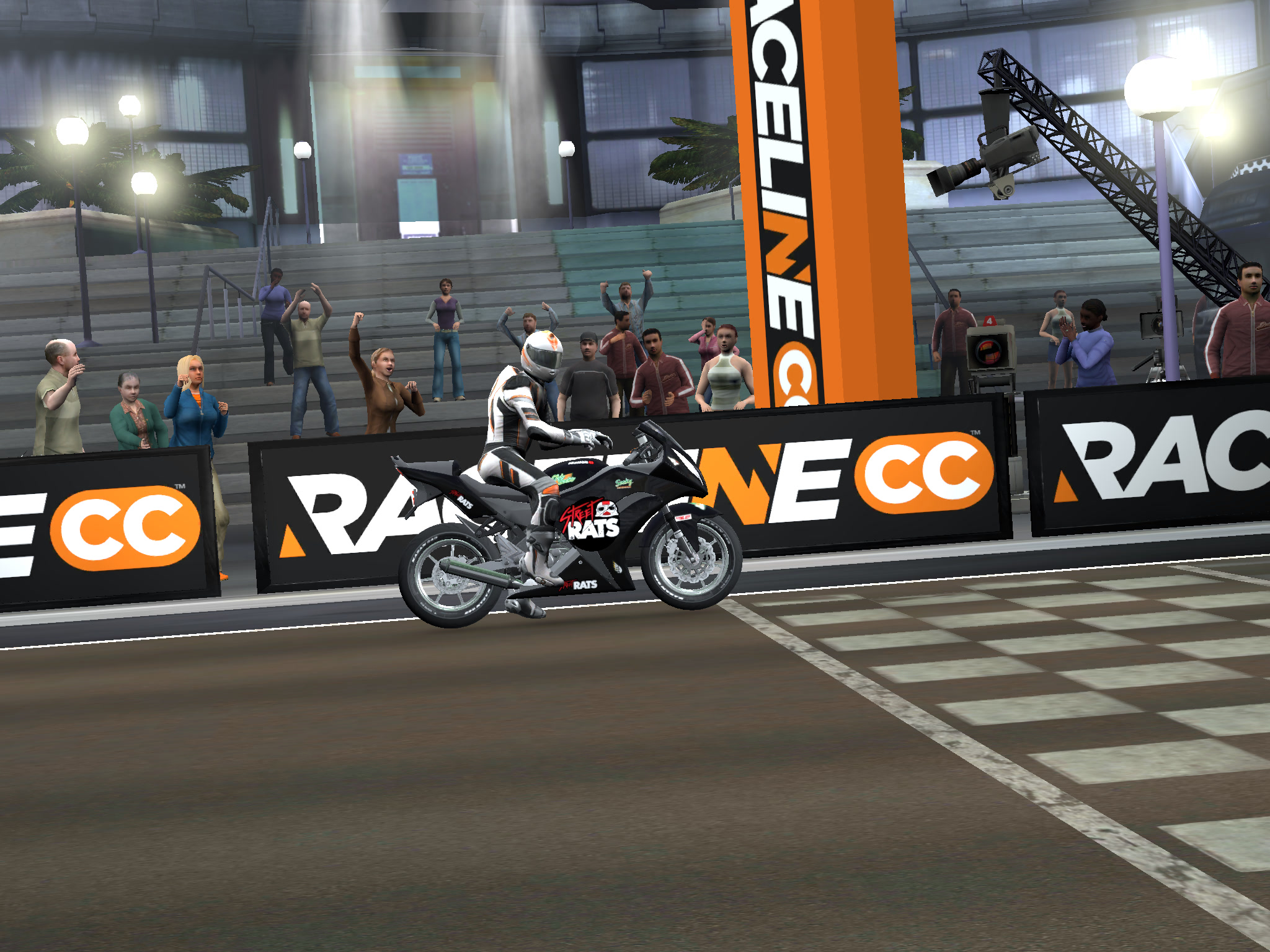 Fortunately, the developers added plenty of different contexts within which to race so the game’s rhythm doesn’t feel too monotonous. Instead of simply giving you only a casual race mode and a tournament mode, the developers went with six different modes that offer different types of challenges. You’ll compete in free races in three different levels of difficulty, compete in tournaments of different tiers, challenge a succession of racers in an attempt to take down their leader, complete a daily challenge (again in three levels of difficulty), and take part in a nice variety of championship cups. You also have The Grid, a clever tournament mode where you can gamble for better rewards but at the risk of losing all you’ve accumulated up to that point. 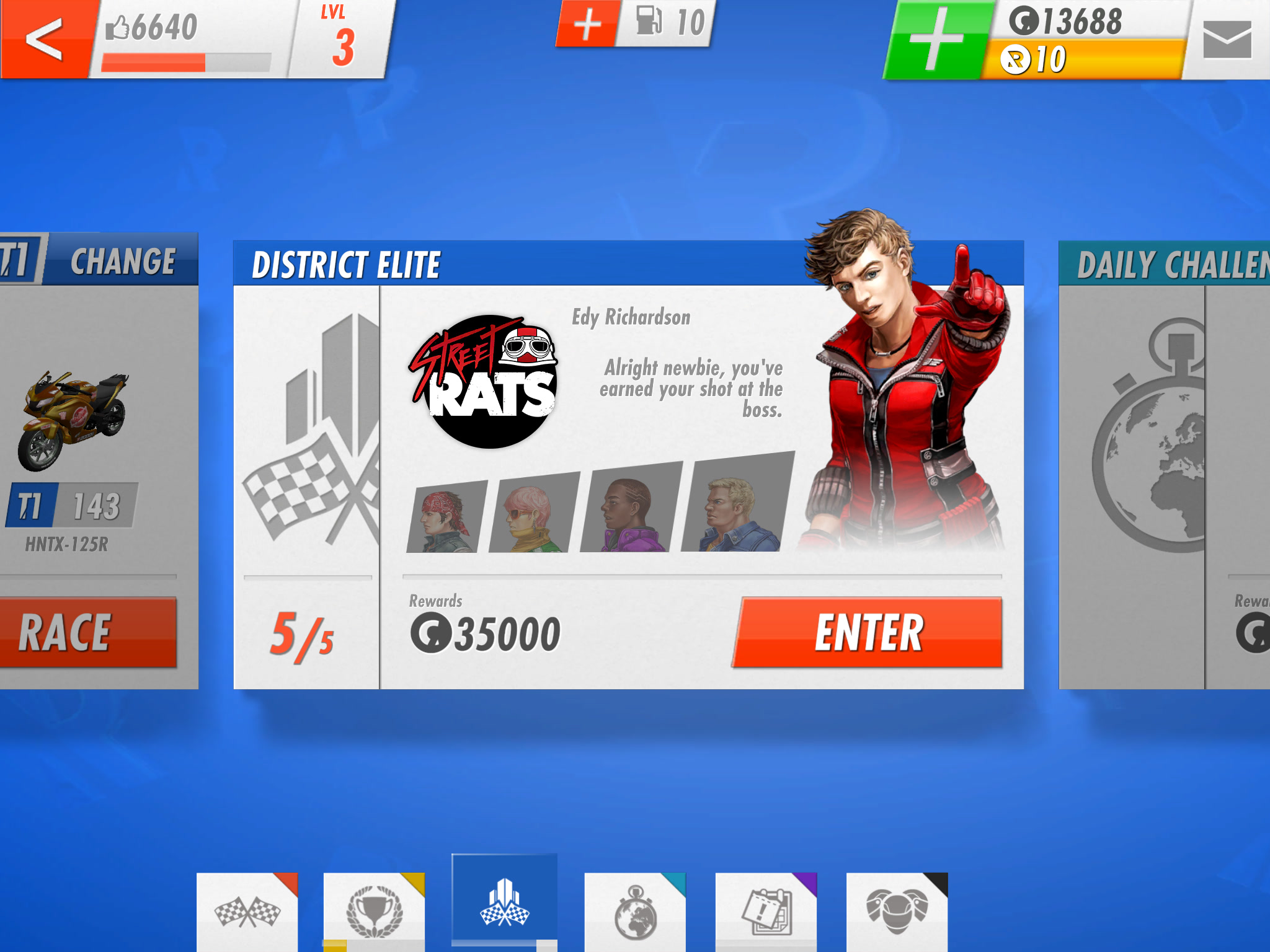 As you can tell, there’s plenty to do in Raceline CC, and that’s for the best because while the racing part of the game is fun, it would have gotten stale quickly if you didn’t have different goals to work for and a leveling system to push you to play more. Each time you win a race, you get “Likes;" get enough Likes, and you level up. You also get bonuses for having a perfect start, passing a car perfectly, and so on, all of which work to give you more to aim for during each race. The game also awards you achievements for actions like perfect passes, finishing a race under a specific time, beating top speed targets, and so on. Obviously, Raceline CC developers have put a lot of effort into dangling the proper kinds of carrots in front of your face to spice up your runs. 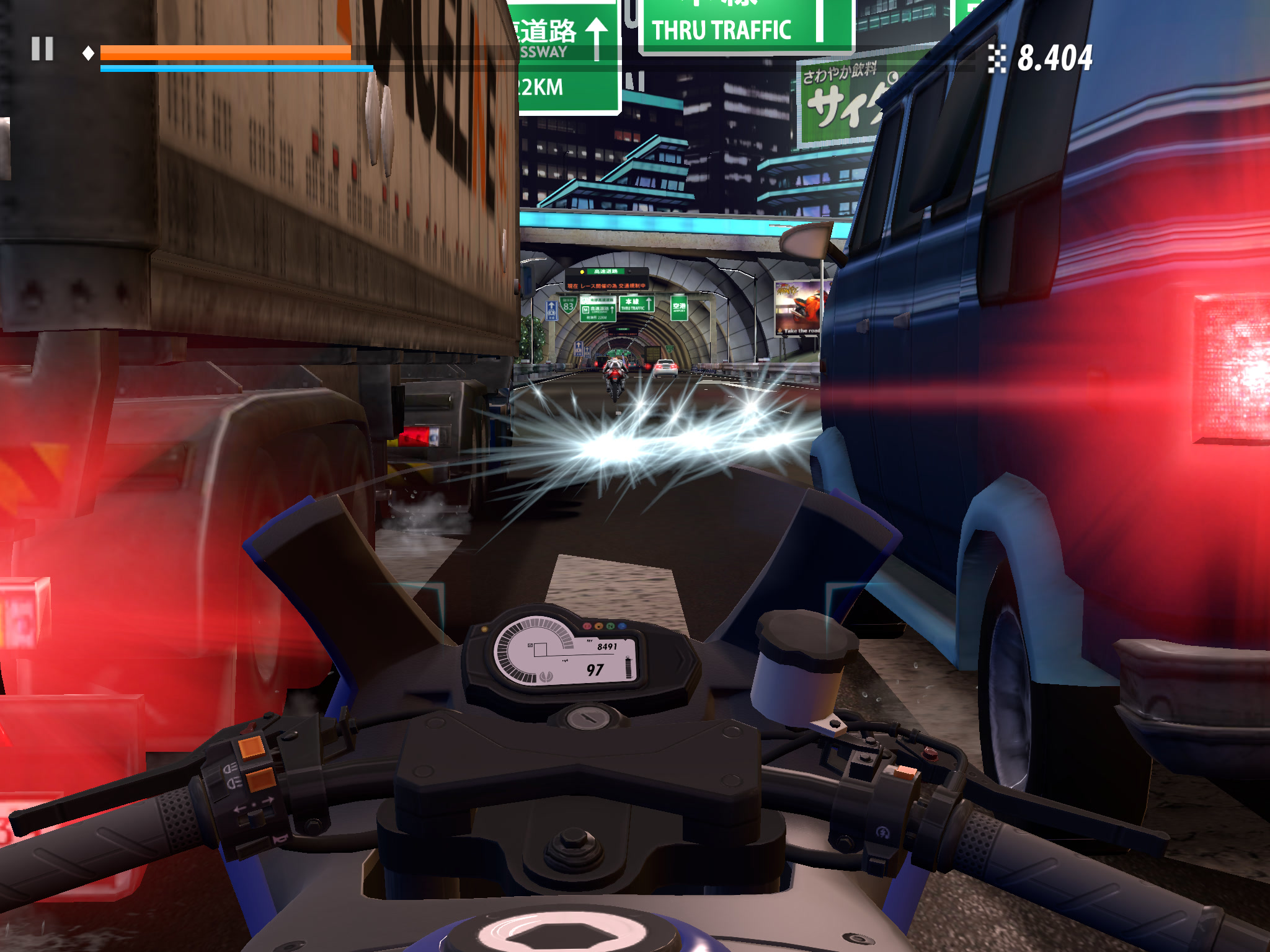 The actual racing part of Raceline CC is very smooth with pretty sharp visuals coming at or going by you at high speed. The developers claim the game uses Apple’s Metal technology, and while the game doesn’t look like a visual marvel, it does run very smoothly and with no slowdowns whatsoever on my iPad Air and iPhone 6. Where the game’s visuals shine is when you hit those slipstreams and the whole screen lights up with streaks of light, a very clever effect that really emphasizes the sense of speed the game is going for and makes the game much prettier than it would otherwise be. However, the level design leans on the boring side because slightly-futuristic cities tend to look alike when you are racing through them in a straight line. There are slight variations, but I think the game should have had a bigger variety of places to race through to avoid the urban monotony. 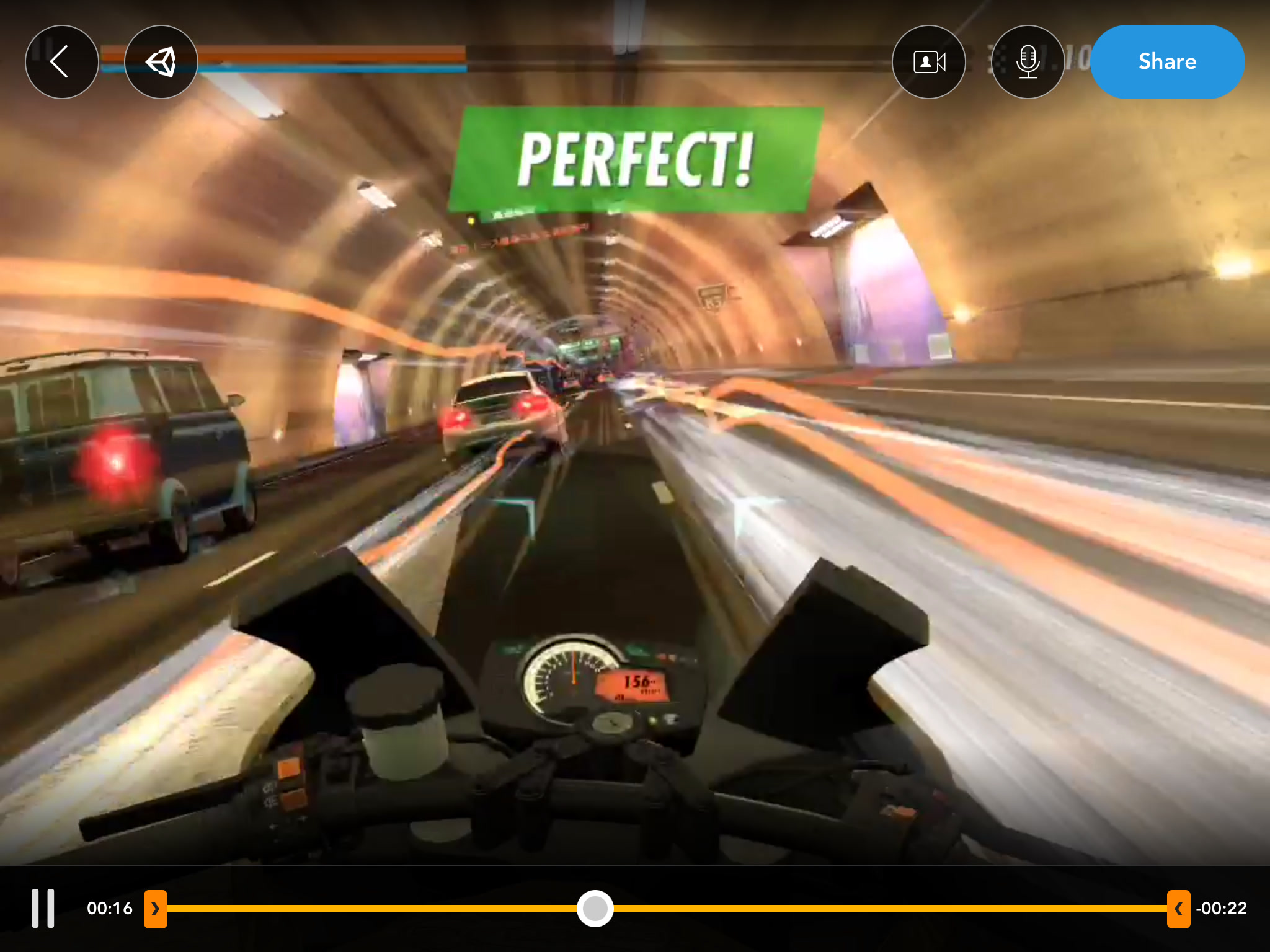 As I’ve already mentioned, your racing is done in a straight line, much like every other drag racing game in history. However, the challenge lies not in shifting gears at the right moment (which, let’s face it, is nothing but a glorified minigame), but in picking up other vehicles’ slipstreams to increase your speed. The way you do so is by lining up behind a vehicle and then changing lines at the right moment (indicated by a target) to take advantage of the slipstream effect. If you stay behind the vehicle for too long, your bike brakes automatically and you bleed plenty of speed. The game reaches its glorious moments when you are swaying from busy lane to busy lane, picking up slipstream after slipstream without losing a beat. 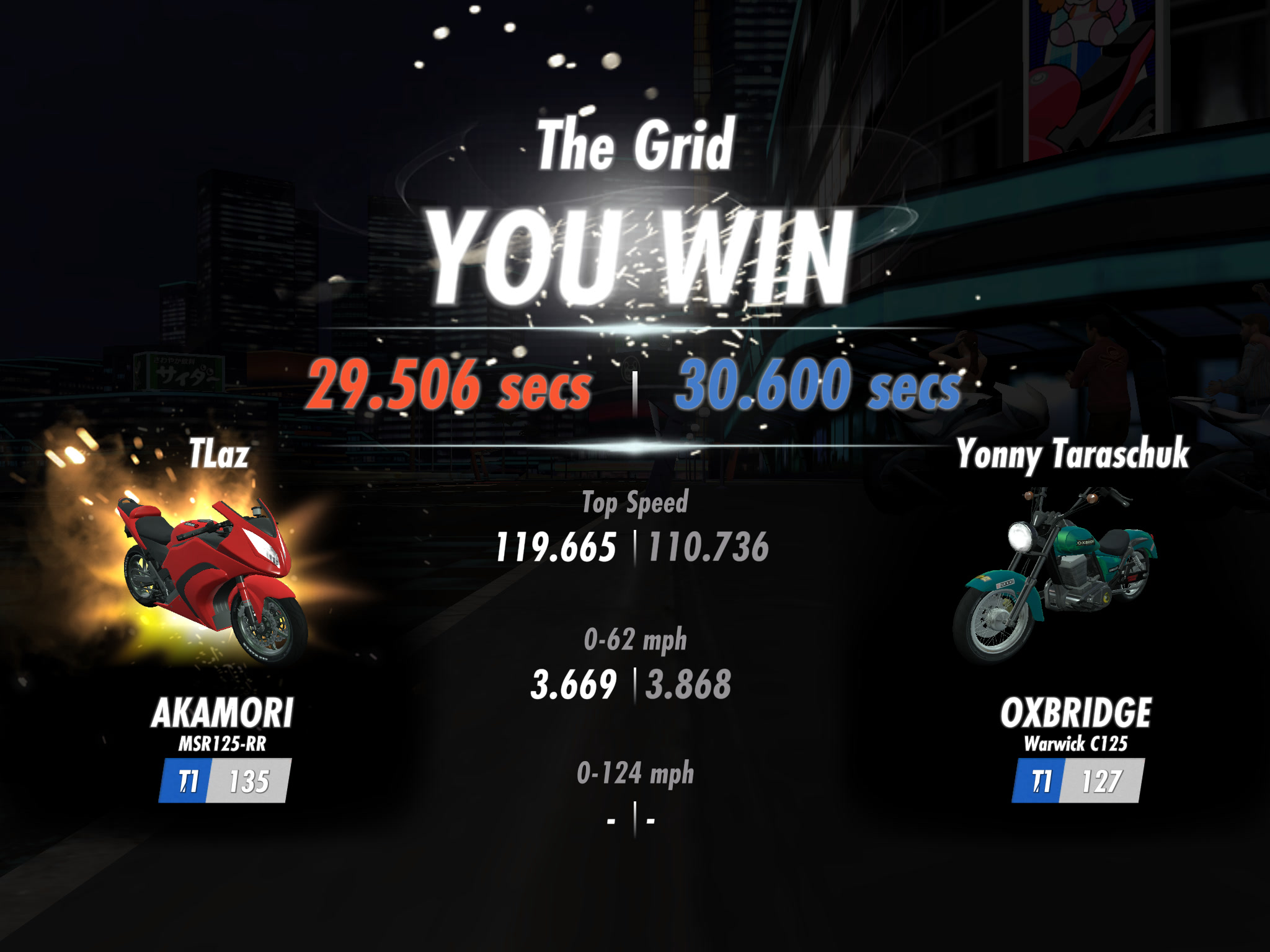 Conversely, the game’s most boring moments come when there are no vehicles for 100 yards, which means you simply drive in a straight line with no way to increase speed. I wish the developers had ensured that there are always plenty of cars around so you can actually do what the game is all about, slipstream. Because of the occasionally-empty streets, if your opponent speeds away, you simply can’t overtake him since you can’t speed up. The other, smaller issue is that the lane changes feel a bit floaty and slower than they should be. Yes, they get better as you get better bikes, but the floatiness was an issue for me. 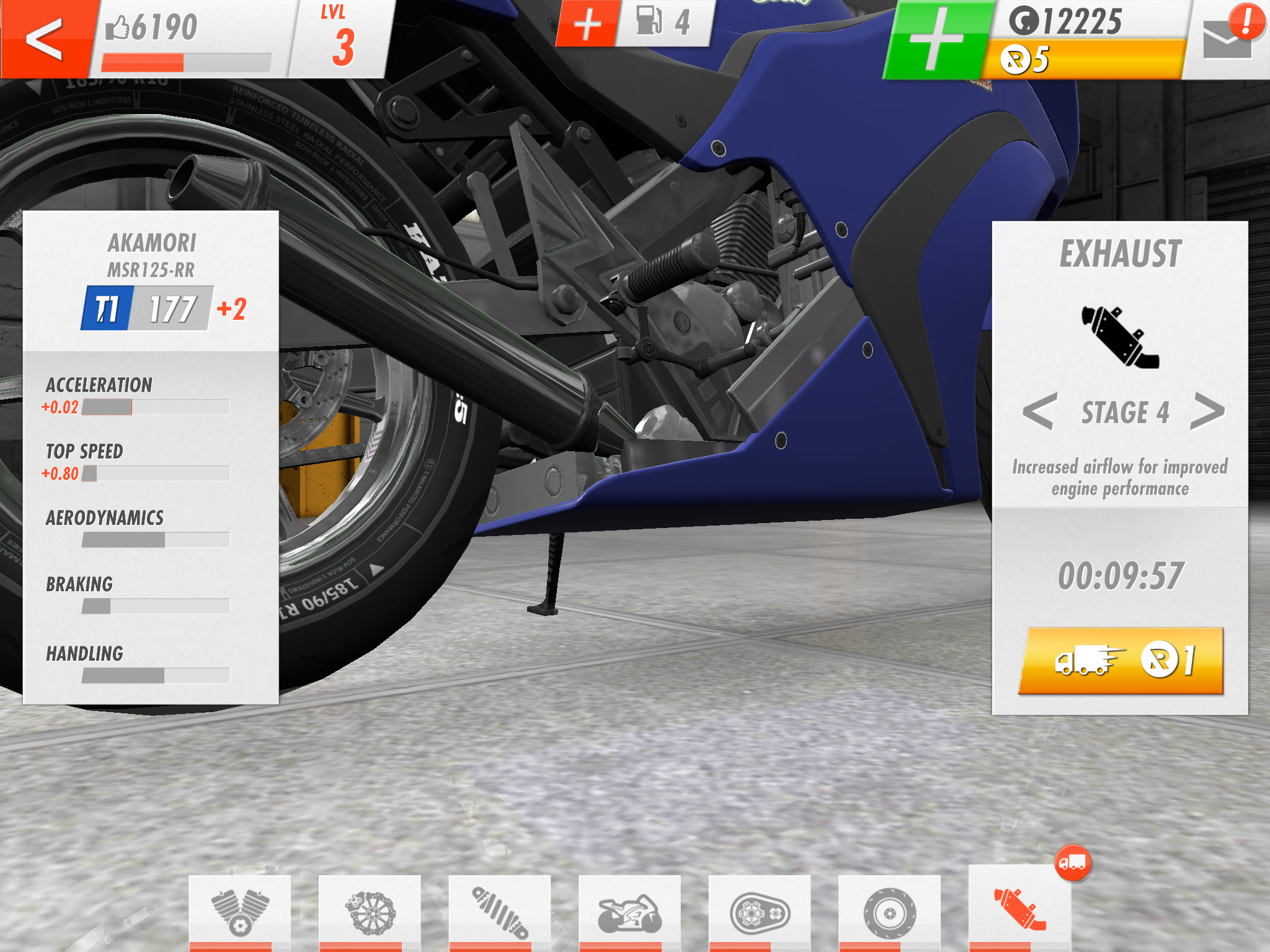 If you find yourself getting beat often, the game will very helpfully prompt you to upgrade your bike’s various parts, which you can do either with in-game gold or with the premium currency. I didn’t find the prices to be too punishing, which was a welcome change from some other F2P games. The bikes were reasonably priced too, so you won’t have to do too much grinding early on. Still, you’ll definitely know when you need to upgrade because you’ll be facing a guy you can’t beat no matter how well you race. One could call that a paywall, but I think more often that not it was the issue of empty streets that made it impossible to catch up if my initial acceleration wasn’t the best. 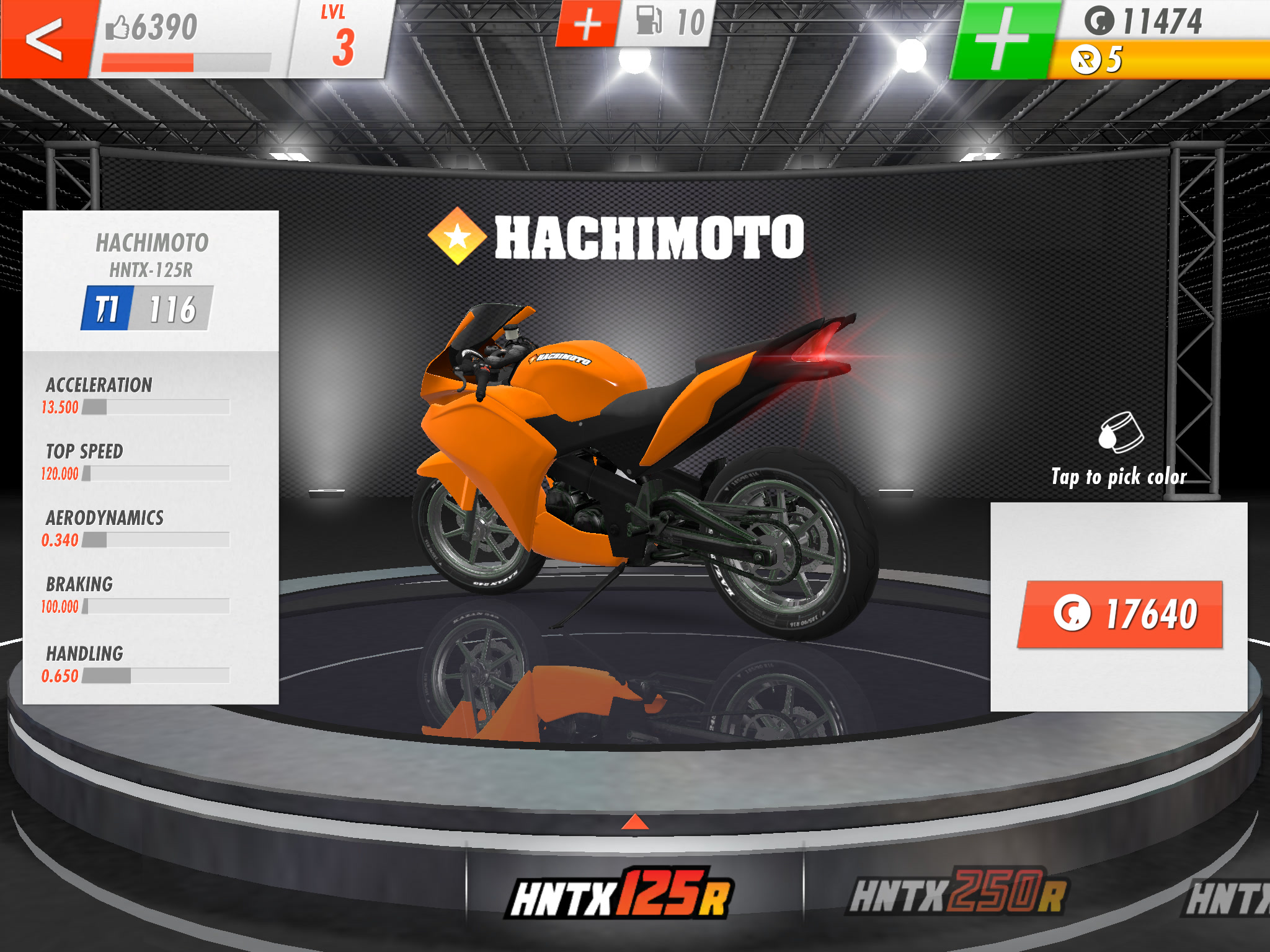 The game does have an energy system though; you can only race for ten (eleven if you add the daily race) races before having to either wait, watch an ad, or pay to refill your tank. The races are very brief, so those ten races will only take a few minutes. Upgrading your bike between races adds a few more minutes of play time, but in general you shouldn’t expect to play Raceline CC for long periods of time; this is definitely the kind of game that’s only for short sessions. That wasn’t a big issue for me – since more often than not I didn’t have too much time to play the game – but I think it will bother many of you. Unfortunately, that’s the nature of the F2P beast since developers need to meter how much content players can consume over time. Overall, I didn’t find the F2P elements of Raceline CC egregious, but they are there and you will bump into them often primarily in the shape of the energy system. 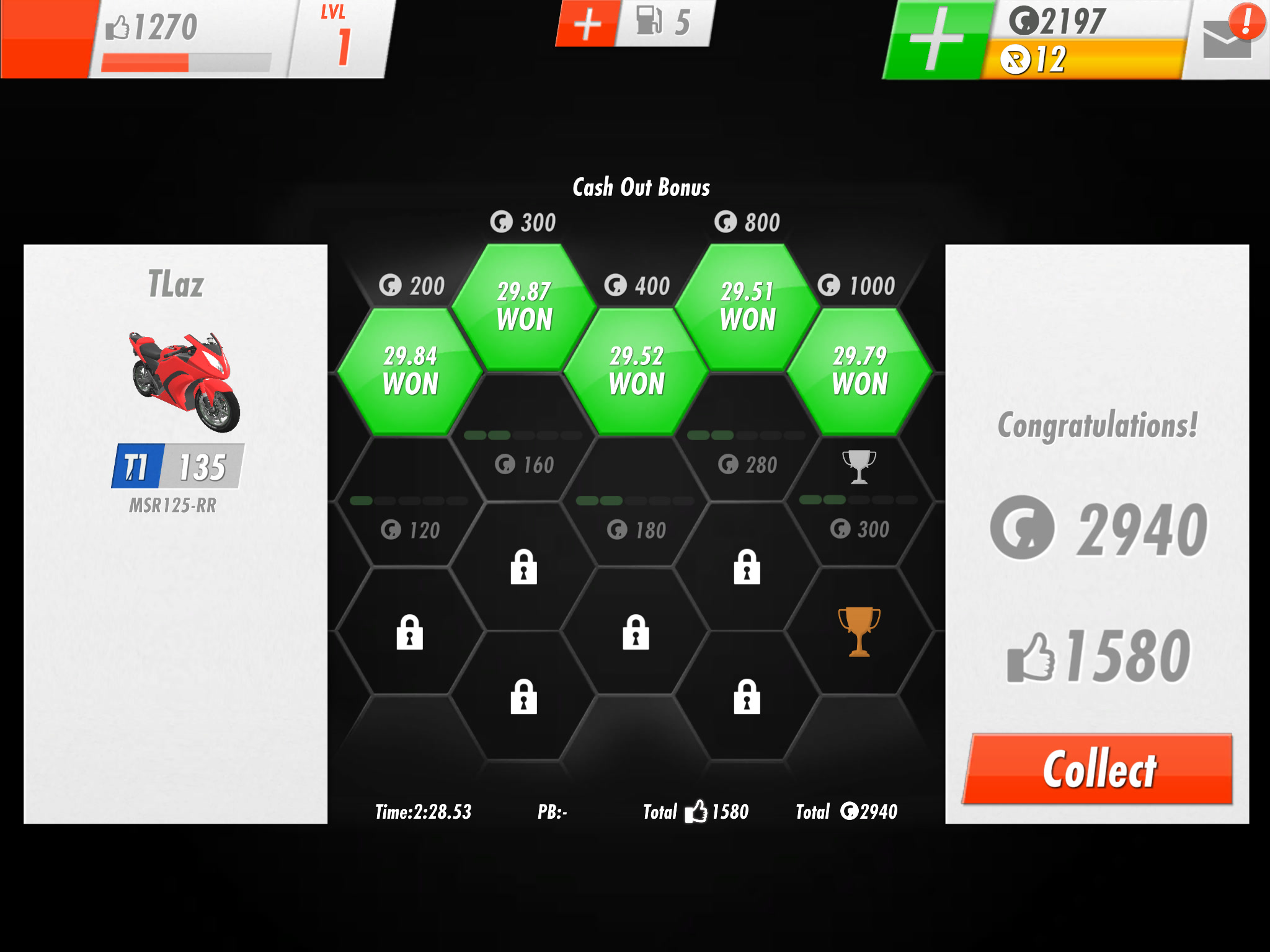 Raceline CC is a fun game, and while it does only one thing, it does it quite well. With colorful and sharp visuals and a good sense of speed, this is a fun racing game that will fill in some empty moments nicely. The game only plays on iOS 9 devices, so keep that in mind if you haven’t yet upgraded your devices. Your progress will transfer from device to device even if you don’t sign in with Facebook as the game prompts you to. Overall, if you enjoy good looking bikes and drag racing games with short bursts of play, you’ll enjoy Raceline CC.