No developer out there is so quick to buck trends and make risky, imaginative, original titles like Simogo. Heck, they don’t even have an internally consistent style or handful of genre’s they stay with. They’ve covered puzzle, rhythm, adventure, endless, all with different atmospheres. They’re basically allergic to sequels and sameness. The single thread connecting their games is their talent for great, memorable game design. So when you look at SPL-T ($2.99), and I tell you it’s the latest amazing game from Simogo, I fully expect you to look confused or laugh in my face. 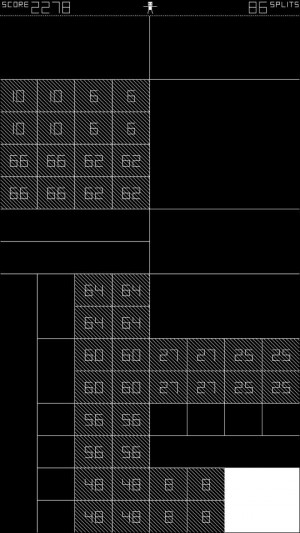 On the surface, there seems to be nothing to this game. Heck, technically there barely is at a 70 MB install size. Pre-Atari computer graphics and a few simple bleep bloop chip-tunes hide a mind bending strategic puzzle game. I’d almost call this a strategy game outright. For the record, there is very likely more to this game. Something hidden away. This review is of the main, core puzzle game that everyone is currently playing. We may update or post news if more is discovered.

The premise is simple. You start with a blank screen. Every time you tap the screen, a line appears. The line splits the cell you’ve tapped on vertically or horizontally in an alternating pattern. You can only split cells down to a certain length and width, which becomes quickly apparent. You have to be mindful of the pattern, because if you run out of blocks big enough to split in any direction, when that type of split rolls around, it’s game over.

When a split line creates a cross consisting of four or more equally sized blocks, those blocks become point blocks, and are filled with the number of total splits you’ve currently made. Now, as you continue making splits, those numbers will count down. Each countdown also earns you one more point.  Eventually, like Tetris, those blocks will clear when they’ve counted all the way down to 0, causing gaps to form in the screen. You also get bonus points based on the size of that block. Basically accounting for the maximum number of cells you could have put inside. As long as the split lines allow it, anything above that gap at the right size can fall down and fill it. 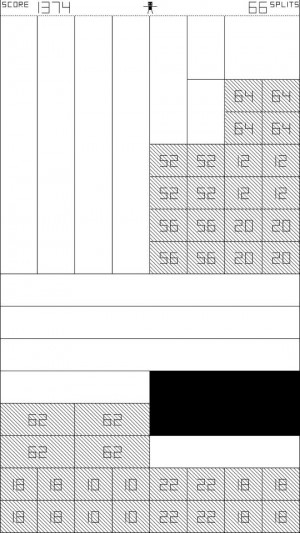 Playing this game is a real experience. Especially if you jump in blind. My first time playing without any rules was just kind of confusing. But even once I read the rules, I had 4 or 5 matches with even lower scores. Soon you really begin to grasp the game as you try different strategies and approaches. And trust me. There are loads of strategies here. Just messing around with the game and trying different things, you’ll have several ‘aha!’ moments. Eventually your split number gets so high that even following a “perfect" pattern where every point block is as small as possible, you’ll run out of space because those blocks won’t clear out of the way fast enough.

To add to that, whenever a point block falls to fill a gap, the number inside of it is halved. This alone completely ups the ante. Every move really does have to be calculated to some degree. It’s easy to accidentally create point groupings without meaning to. Especially at first and especially if you’re aesthetically inclined, so to speak. You’ll want to create certain patterns and keep things nice and neat, but that just isn’t always an option. Sometimes you’ll accidentally create groupings of 6 or possibly more, leaving you with random leftover cells too small to split, sitting there uselessly while your eighty something point block has to count down. 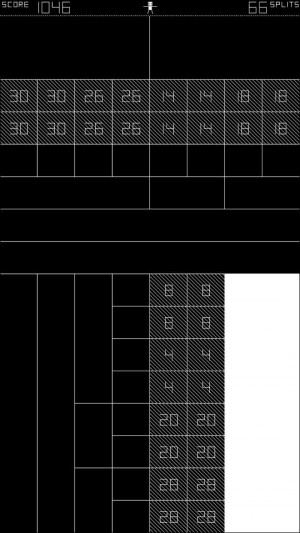 This is brilliant design with the simple goal of high scores. Apparently, scores in the hundreds of thousands are possible and have been achieved. Now, I love that Simogo does their own thing and doesn’t give in to trends, but I have to sin them for not including Game Center in what is basically a score attack game. You can scroll through your own top ten scores, but by golly I have never wanted to check out some leaderboards so much in my life. But that’s part of the “mystery" angle I haven’t described yet.

I’m about  to issue a spoiler warning for the paragraph after this one. There are tons of little secrets in this game, and you might have more fun trying to discover them all on your own. Hidden options and the like. Our forums are abuzz with people pointing out what they’ve found, and talking about score possibilities, which is why I think Game Center was probably left out on purpose. To get people to ask each other about the game. Everyone is SURE there is a hidden story, or hidden modes, or some kind of reward to find. Despite that, I think the game would have been much stronger with it’s inclusion.

So what our forums have discovered thus far… You can shake the screen to change the color randomly going through a cycle. You can flip the screen upside down to invert the black and white, or the main color and the background/gap color. While going through the tutorial, if you wait a minute or two on each of the 5 pages, you’ll get a secret message alluding to some kind of story and including references to the developer’s home city. If you hold the play button on the main screen, you play a secondary gravity based mini-game about balancing a ball on a see-saw. Apparently there’s a way to change the title screen in reference to one of the secret messages, and I don’t even know how. Who knows what else will be found?

Even if there is no big secret reward, the enjoyment of this fantastic game is reward enough. This is a minimal experience that manages to have a steep learning curve and a baffling amount of depth. The main reason you should buy this game though? Balls. Simogo has huge balls, and they continue to impress. I mean, just read the description of this game. " We know. It doesn’t look like much. But we promise that it’s a very good puzzle game. Like, really good." That’s it. All of it. Only you can get away with something like that, Simogo. Bless you.