What do you get when you cross the idea of sentient objects from Toy Story with eastern philosophies of reincarnation, but instead of toys, the objects are tools of all kinds, from phones to frying pans to bullets to weapons of mass destruction? You get one of the stranger games available on the App Store. Throw in a great minimalist silhouette art style and puzzles of death and blood shed, and you’ve got Redden ($2.99), a nifty title from earlier this summer that I nearly overlooked entirely. 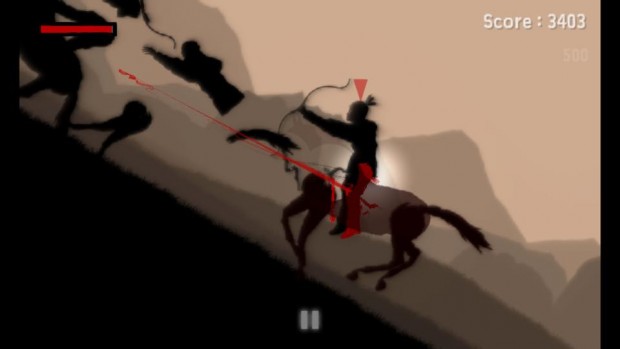 Developed by Bulosodeuk and Joonyoung Kim (Man am I glad I’m not narrating this), Redden has some very interesting concepts and themes. Much like Toy Story, the sentient objects in Redden feel a sense of duty to their owners, and pride in being useful/used. The game starts off in a dump, where a bunch of old items with the red markers signifying sentience start telling stories to a new item that’s just been thrown away, reassuring it in its dire time. I guess all that soul scarring agony that Toy Story 2 and 3 put us through in exploring the concepts of death and being abandoned are a little bit better when you throw some reincarnation into the mix. Just a little bit… 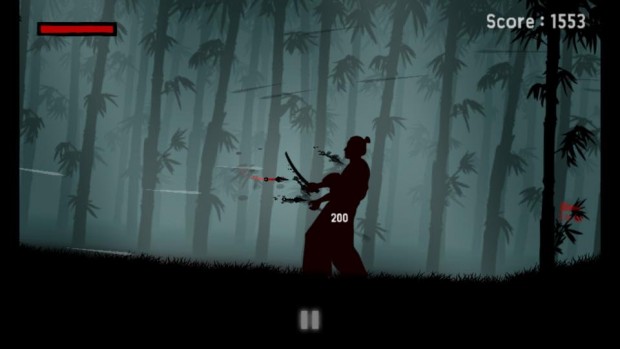 Sorry, I had a moment there. Anyway! These items tell three stories from their past. The first is of a Chinese prince and his trusty bow and arrow. The second is of an incompetent ninja doing ninja things. And the third is the story of a kind of fat and lazy yet super effective Vietnam War sniper. I don’t know that these are the actual historical settings, as they’re very vague, but that’s the impression that I get. Each level involves one of our protagonists making some kind of crazy long ranged attack that laughs at the very idea of physics before spitting on it and stomping it into mush, as you control various projectiles to nimbly and deftly dodge obstacles on the way to the primary target at the end of the level.

The first story tells of a young Chinese prince, first learning to hunt various animals before later becoming about a revolution against a barbarous invading force. Here, you control arrows fired from a bow. Every projectile has a special ability tied to its momentum meter. You gain momentum by soaring through the white winds, while black winds eat your momentum like Homer Simpson… well, eats. If you have enough momentum, touching the screen will activate your power, and any kill that you get while using said power instantly refreshes your momentum, so you can actually send a single arrow through several animals and/or people. There are objects that you can go through, like branches or pots or lights, but thick threes, rocks, walls and the like will stop you, as will enemy shields and weapons. 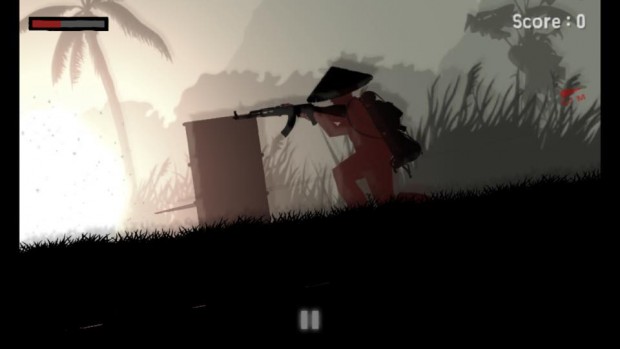 Things start to get difficult in the second chapter, which involves an incompetent loser of a ninja trying to impress and win the affections of a pretty lady person (I assume she’s pretty, but it’s all silhouettes, so…) I know. I was also immediately tempted to make the comparison to Naruto, but I wasn’t going to do so until I learned about his power. He throws kunai, and the momentum power of those kunai are Kage Bushin, or Shadow Clones, literally the exact same power that makes Naruto special. Anyway, you’ll spawn four kunai clones that fly in front of your main kunai. This is different from the arrow power, which was simply a piercing attack that kept going as long as you had meter. Here, you still have to keep the original kunai safe.

This is where the levels get a little bit more puzzle like. You have to find the right way through the level to keep your momentum chain going. I was stuck on one level for the longest time before I realized that I was supposed to take an alternate path. An enemy kept on deflecting my kunai no matter what angle I went for, as enemies become apt to do as the game goes on. The main way to get around deflecting enemies is to take out a light source so they can’t see your vector of attack, but that wasn’t viable here. I finally realized that there was a presumably innocent old looking man on an upper floor that I was supposed to kill instead to keep the chain going. 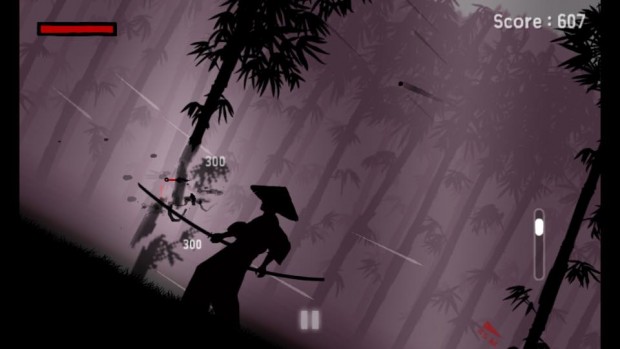 Another aspect of the challenge lies in the visuals. Playing the game by this point you’ll have noticed that enemies are segmented like action figures into limbs, a torso, and a head. When you pierce any particular body part, they dissolve away. The tricky bit is the visual confusion when this happens. Your shadow clones might pierce a leg and a torso, but then an arm might still fall and hit your main kunai, ending the level. The important thing is to keep as many clones up as possible at all times, so any time your clones kill something, immediately drop and refresh the power with your newly filled meter to replace them.

The final story is about a sniper who starts out trying to protect his squad mates before becoming a government assassin who comes to regret his actions. As expected, the bullets he shoots are way faster and harder to control, but they do have a super neat power. The power of Michael Bay. I mean, explosions. Any time you need to clear the way or kill a group, you can spawn an explosion in front of you. The final level here gave me a lot of trouble. And it wasn’t until the very final level of this chapter that I realized you could hold down the screen to slow things down and not spawn the explosion until you let go. Trust me, this makes things a hundred times easier.

You are scored at the end of a level based on how much blood you shed and stuff you destroy (which becomes morally questionable later on, as very clearly several of the people you can kill to keep up momentum are actually innocent bystanders or victims, but whatever.) If you do well and land a headshot, you’ll probably get three stars. Personally, I don’t find the score very alluring here. It’s more about just beating the levels and getting the experience, but if you want to master the game, that option is here. All in all, it’s a super interesting game. Definitely frustrating at times, but the cool art style, odd mumbling muffled story dialogue, and the super impactful (literally) and memorable ending make this a real stand out. It’s not super flashy, but it’s one of those rare unique experiences that you’ll only find on mobile. They’ve updated the game with multiple control inputs from touch to tilt, and easier difficulty levels as well, at the cost of your possible score. If you like artistic games, definitely don’t pass on this one.