I have a problem with Mucho Taco (Free). Sure, it’s entertaining (as clickers go) with fun art and a silly premise. It has some neat ideas to switch up the genre, like swiping instead of clicking and throwing in a vaguely Tiny Tower (Free)-esque restaurant timer system. And there are a lot of fun little details here and there, like the way the filling peeks out when you fold a tortilla or the way the customers start picketing when your restaurants close. My problem with Mucho Taco, though, is that it is seriously eating into the time I spend playing Noodlecakes other idle clicker, Bitcoin Billionaire (Free).

See, that game just got a huge update, and now they spring another clicker on us? The nerve! Of course, technically Noodlecake is just the publisher. Billionaire was developed by FizzPow Games and Mucho Taco comes from One Simple Idea. But still! Too many fun games, Noodlecake. Too many! 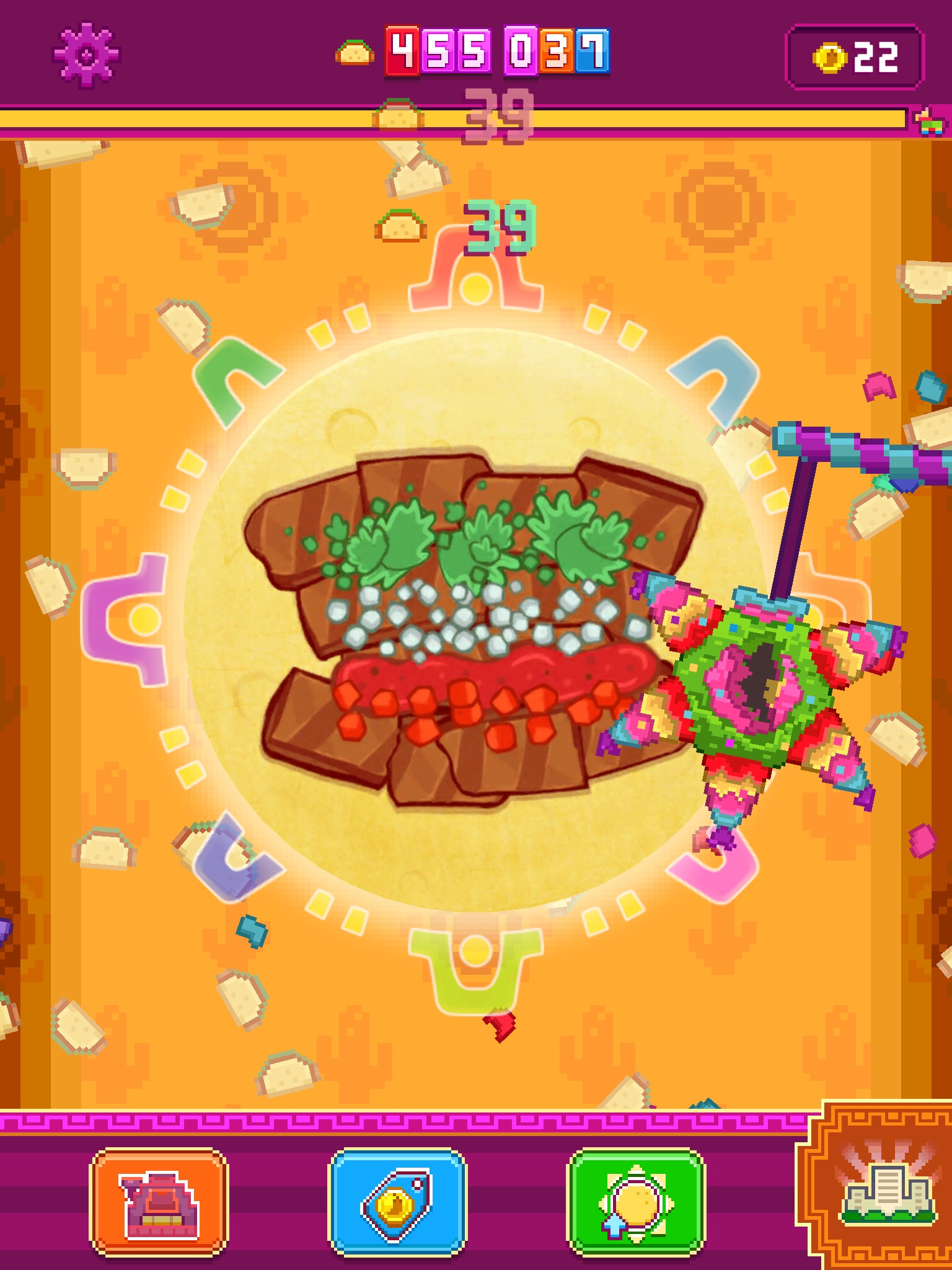 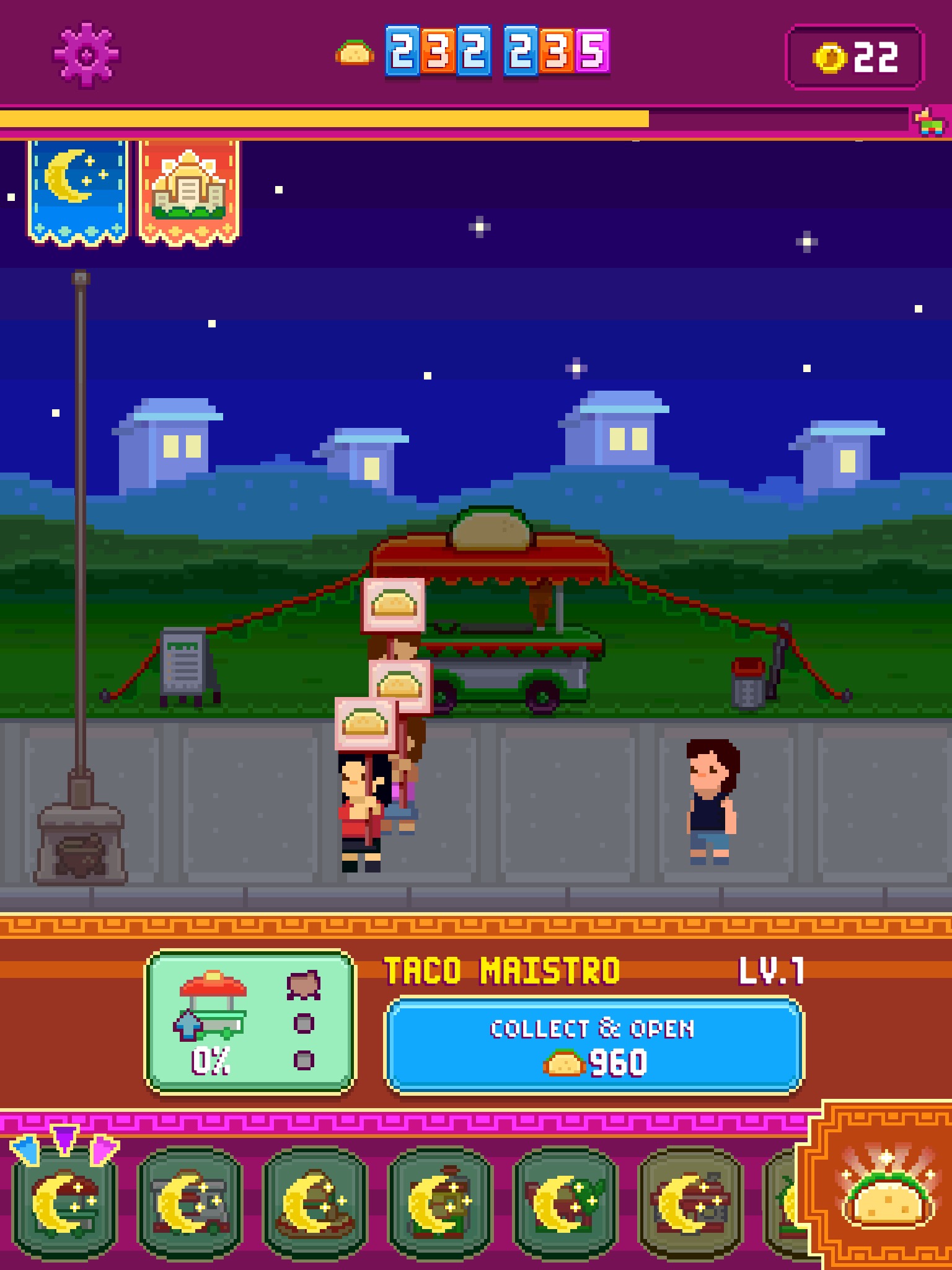 With that important business out of the way, let’s dive right into some delicious tacos. In Mucho Taco you play as a humble taco maker with but one ingredient. All you have to do is simply swipe the screen in any direction to fold the tortilla up and you’re good to go. And then you do it thousands of times. So yeah, it’s basically a clicker. The thing that sets it apart, though, is the dressing. Instead of upgrading your clicks, you buy new ingredients. Instead of putting money into crazy investments, you buy new restaurants. It’s actually really clever how it all comes together, even though it’s still basically an idle clicker at the end of the day. 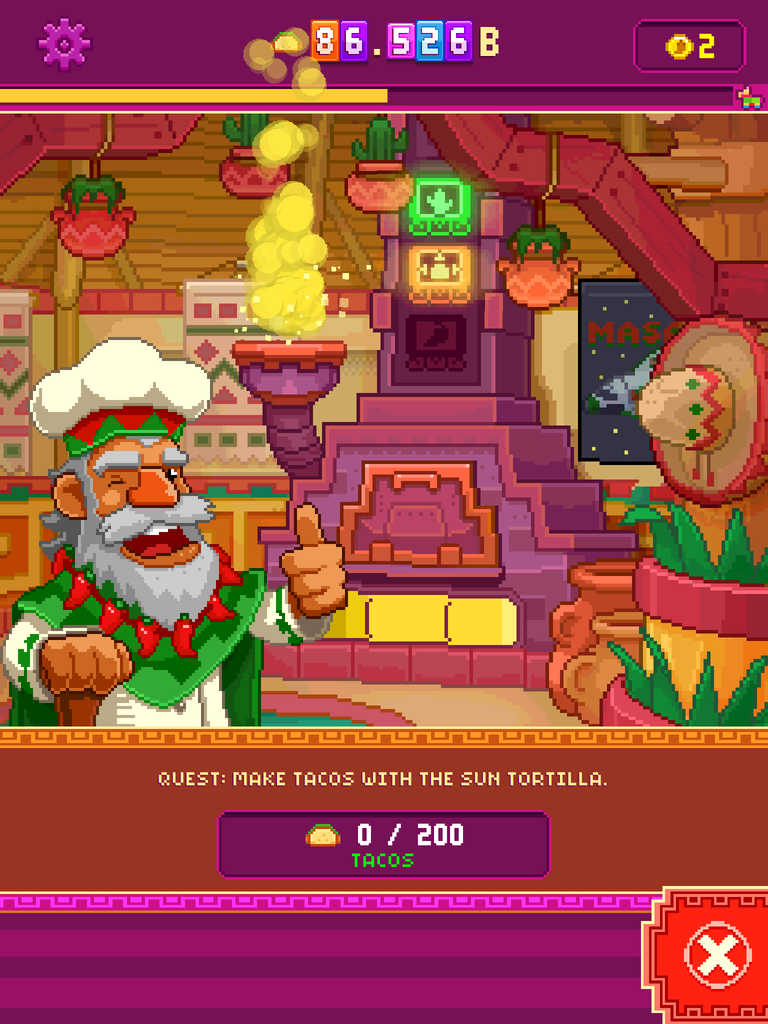 In a lot of ways, it’s very close to Bitcoin Billionaire. Nearly everything in Taco has a pretty direct equivalent in Billionaire, even though superficially the games look fairly different. For example, the three spinning flavor jars that pop up randomly with either a trick or a treat can be traced back to Billionaire‘s three orange cards. That’s not necessarily a bad thing, though, since that game is almost universally regarded as one of the best clickers on iOS.

One thing that is a bit different, though, is the way investments–err, restaurants–are handled. Instead of constantly making more money–err, tacos–while the game is open, the restaurants are on timers that go a set amount of time before needing to be reset. It’s a lot like restocking the shops in the Tiny Tower series or waking up the animals in Disco Zoo (Free). It’s an interesting twist on Billionaire‘s formula, and adds a small layer of management (or the illusion of it, at least) since you can then upgrade the restaurants and add boosts to make them more efficient.

The only real negative I can say about the game is that the actual taco making–as fun as it is to watch that tortilla fold up–doesn’t seem to rake in nearly as much proverbial dough as the restaurants do. I feel like the only reason to swipe at all is to get the piñatas to show up, but even then, most of those seem to offer fairly meager rewards. If you skip out on taco making altogether, you’re mostly just checking in a few times a day to reset the restaurant timers. (Sure, there are also missions that go toward a Super Piñata, but it doesn’t seem a whole lot better than the regular ones.)

If you couldn’t tell, it’s kind of hard to talk about Mucho Taco without also talking about Noodlecake’s other clicker, Bitcoin Billionaire. The former was clearly inspired by the latter, though it does tweak the formula slightly with the store management aspect and a really great theme. Unfortunately, at a certain point you’ll probably just be checking in a few times a day to re-open your restaurants, which is a stark contrast to being able to play for hours on end in Billionaire (not that I’ve ever done that… ehem). That said, it’s free, and you’ve got nothing to lose by giving it a download and seeing if it clicks… err, swipes. (And speaking of swipes, be sure to check out this lovely PSA on the best taco making method. You’re welcome!)