Gameloft’s Order and Chaos (Free) has been the spearhead for some technical firsts on mobile, at least in terms of prominence: it was the first really big MMORPG experience on mobile, its MOBA spinoff Heroes of Order and Chaos (Free) is one of the first and longest-running MOBAs, and both games were some of the first to cater to streaming, even including native game streaming. But since the first Order and Chaos, the landscape has changed: paid games and subscriptions have fallen by the wayside while free-to-play experiences have become the ruler of the roost. So, it makes sense that with Order and Chaos 2: Redemption (Free), now out on the App Store, that Gameloft would need to start from scratch on making a modern experience. And in many ways, they’ve succeeded at making something that is welcoming to players, though we’ll see long-term just how experts take to it.

One of the impressive things with the game is that the first play experience is super-smooth and does a fantastic job at introducing players not only to the game, but to the story. You start off by destroying the Primal Heart with Khalin’s Hammer for yourself, but along the way learning the basic controls. And then you create your character, and are quickly introduced to all of the game’s mechanics, with items, crafting, quests all introduced steadily as you play in a remarkably transparent way. I despise hand-holding tutorials, and I’m glad Gameloft handled this in a supremely intelligent way. After all, I’ve seen the Modern Combat 5 (Free) intro sequence too many times when just trying to log in to my account from a new or restored device. 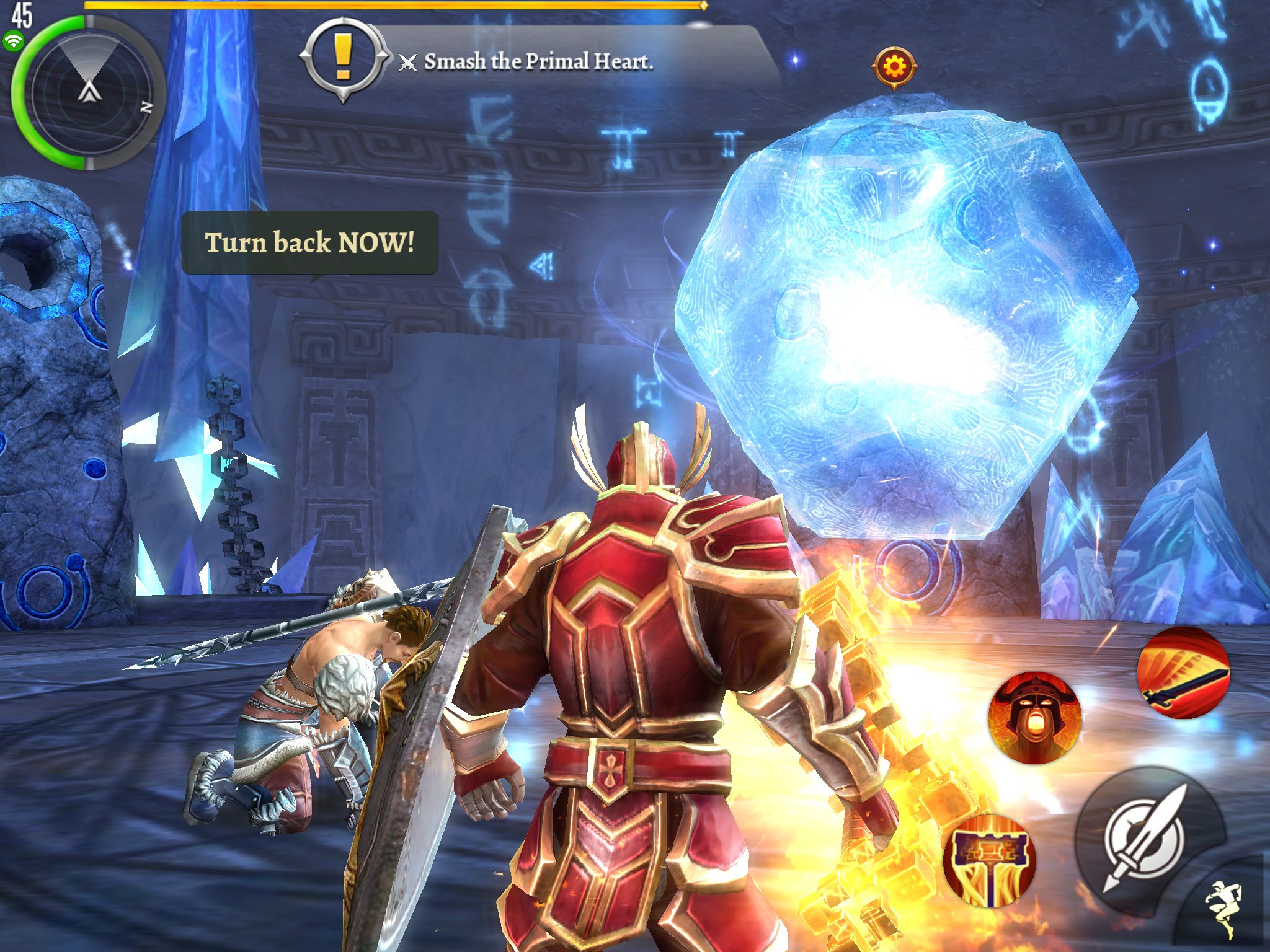 The whole experience is meant so that you can run around and just play the game as much as possible, and the Instant Quests are a huge factor into that. As you’re running around doing whatever task you’re set out to do, if you do something like kill an enemy for another quest, it counts toward that. You’ll just get quests as you’re running around, can tap the quest status to go and get guided to where you need to go, and then just complete them. Again, this is all just part of the game’s experience: you can run around and just play the game and never feel like you’re wasting your time just wandering to find something. You can also easily toggle between the quest you’re focusing on from the top menu.

Of course, the quests do involve “kill x number of enemies" or “deliver item y to person z," fairly standard RPG and MMORPG fare. You’ll get to join up with parties eventually and go into dungeons to do stuff, but early on, expect plenty of the familiar fetch quests. At least you get a ton of fishmen to kill. Early on, you’ll also get to work with other players not in your party to kill creatures in the world, though it appears all loot is independent. As the population grows and spreads out, you’ll need to party up and form guilds and get people to play with. Still, the game is quite good for wandering around and finding things to do.

The menus are very deep, with plenty of submenus to dig through. The game also uses two different sections, with a disappearing bottom bar, so finding exactly what you need will take a lot of acclimation with the menus, for sure. What I wish was more complex was the character creation: you get such a limited set of options for hair, face, and body choices that it feels limiting, particularly in 2015. Thankfully, your equipment does change your appearance, so you’re not square out of options.

The game feels very heavily driven by modern free-to-play action-RPGs. Crafting and evolution of weapons plays a huge part in the game, where you need to use materials and other weapons to power up and evolve your heritage weapons, which are special weapons you get throughout the game. Plus, the wheel of three timer-based abilities, while also driven by a mana bar, feels very much like other action-RPGs. Of course, this shouldn’t come as a surprise: the genre is really popular, and Order and Chaos really had to make changes to adapt to modern games. After all, the original is from a time back when subscriptions were a viable way to make money. 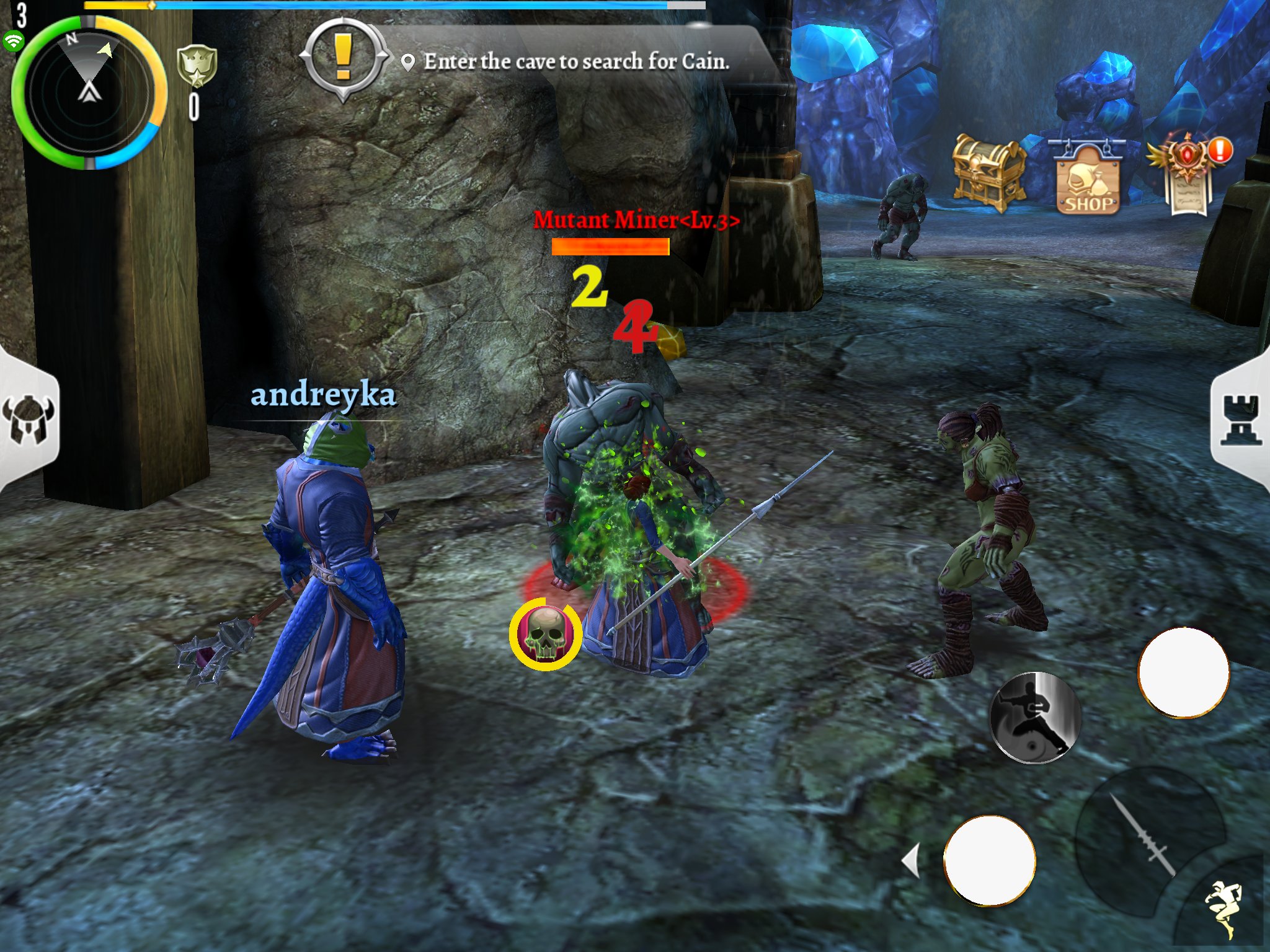 Do note that this is a good-looking game, and one that’s constantly communicating with the internet to play with other people, it will murder your battery. Even on an iPad Air 2, it drained battery like crazy. So, have a charger or giant battery pack nearby. Seriously, have one of those Anker battery packs by your side if you’re playing this on the go, or something similar, because this game is hardware-intensive to a huge degree. Not that you should expect anything less from a Gameloft game, but still, beware.

Monetization is driven through a two-tier currency system, with gold used to buy small items and to help craft items. Premium currency has a number of uses, including activating premium loot chests. What I like is with the intro packs, you can buy a 30-day investment, where you get 25 gems at purchase, and 10 gems per day every day after that. You also get a free loot chest every half-hour or so, but these contain lower-ranked items and scraps. Thankfully, the game tells you if something is just there to be scrapped and sold for gold. 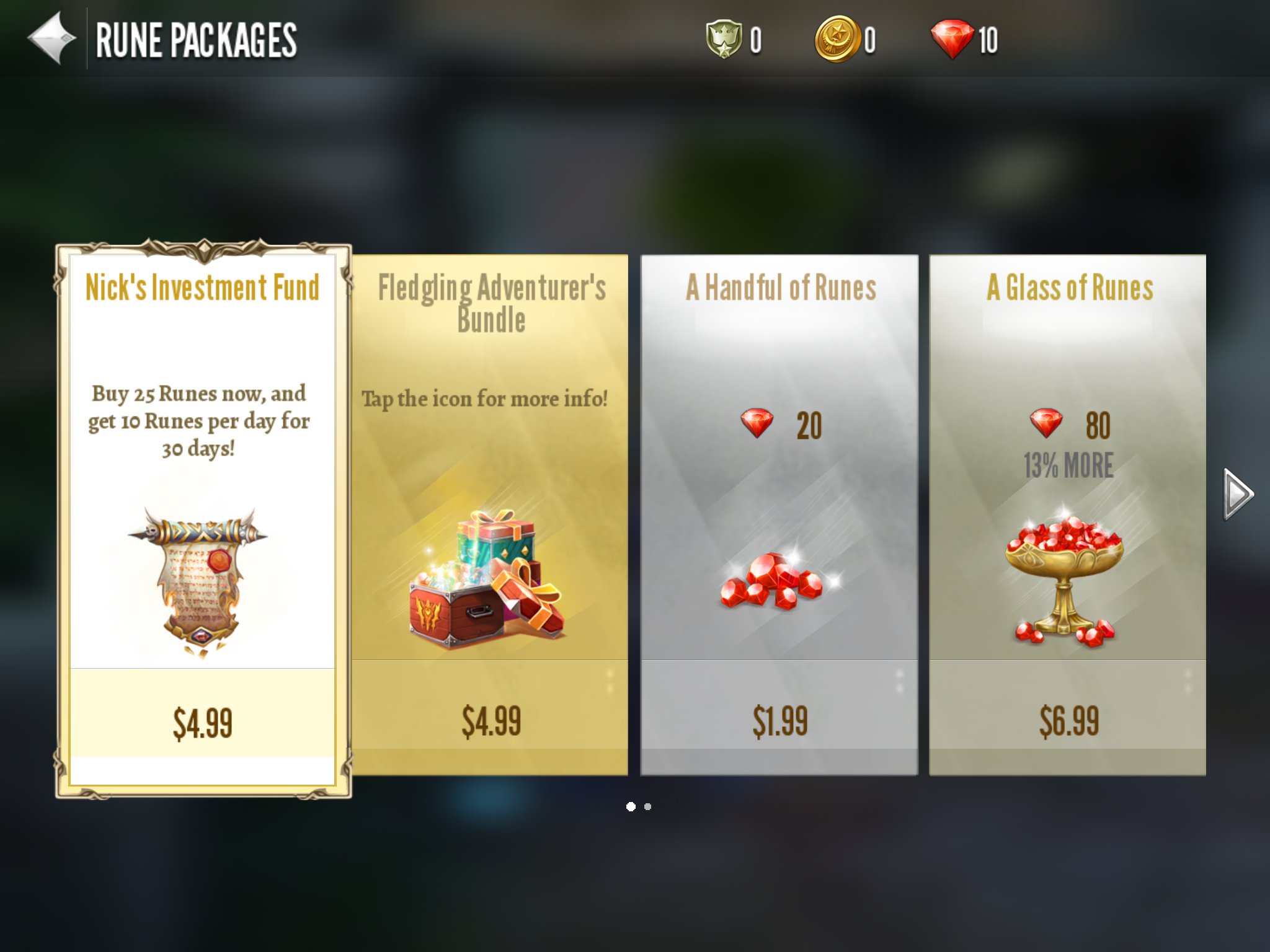 Honestly, this is a big technical achievement to get an impressive-looking game of massive MMO scope on iOS, again. And the changes that Gameloft has brought to the table, especially with the instant quests, make this an interesting game that’s easy enough to jump into. But MMORPGs always matter in the long-term, and it’ll be interesting to see how the long-time vets of the first game, with the people picking this up for the first time, take to this one in the coming weeks and months. Still, the initial parts of the game? There’s some neat stuff here worth checking out.