When you start playing ECA-Games’ Rock(s) Rider HD ($2.99), a few things pop out immediately, first of those being how great this mobile game looks. You know how many developers brag about their game’s “console-quality" visuals? Well, Rock(s) Rider HD‘s visuals can definitely be called console-quality. Of course, we have to start rethinking these console comparisons since mobile hardware is improving rapidly, but that’s a discussion for another day. So, if you enjoy your games visually spectacular, you can’t really go wrong with Rock(s) Rider HD as this is the kind of game you can use to show off your phone or tablet to those who aren’t into mobile gaming.

Now, though, visuals aren’t everything in a game, and while Rock(s) Rider HD is a very fun game to play, there are some kinks in the level design that often make the game frustrating. Not because it’s too challenging – since that’s part of this genre’s DNA – but because the challenge occasionally lies in reading the developers’ minds; too often a run will come to an abrupt end because of an obstacle you couldn’t have avoided unless you knew where it was to begin with. Still, if you like motorbike racing games and enjoy a good challenge, this game will definitely entertain you. 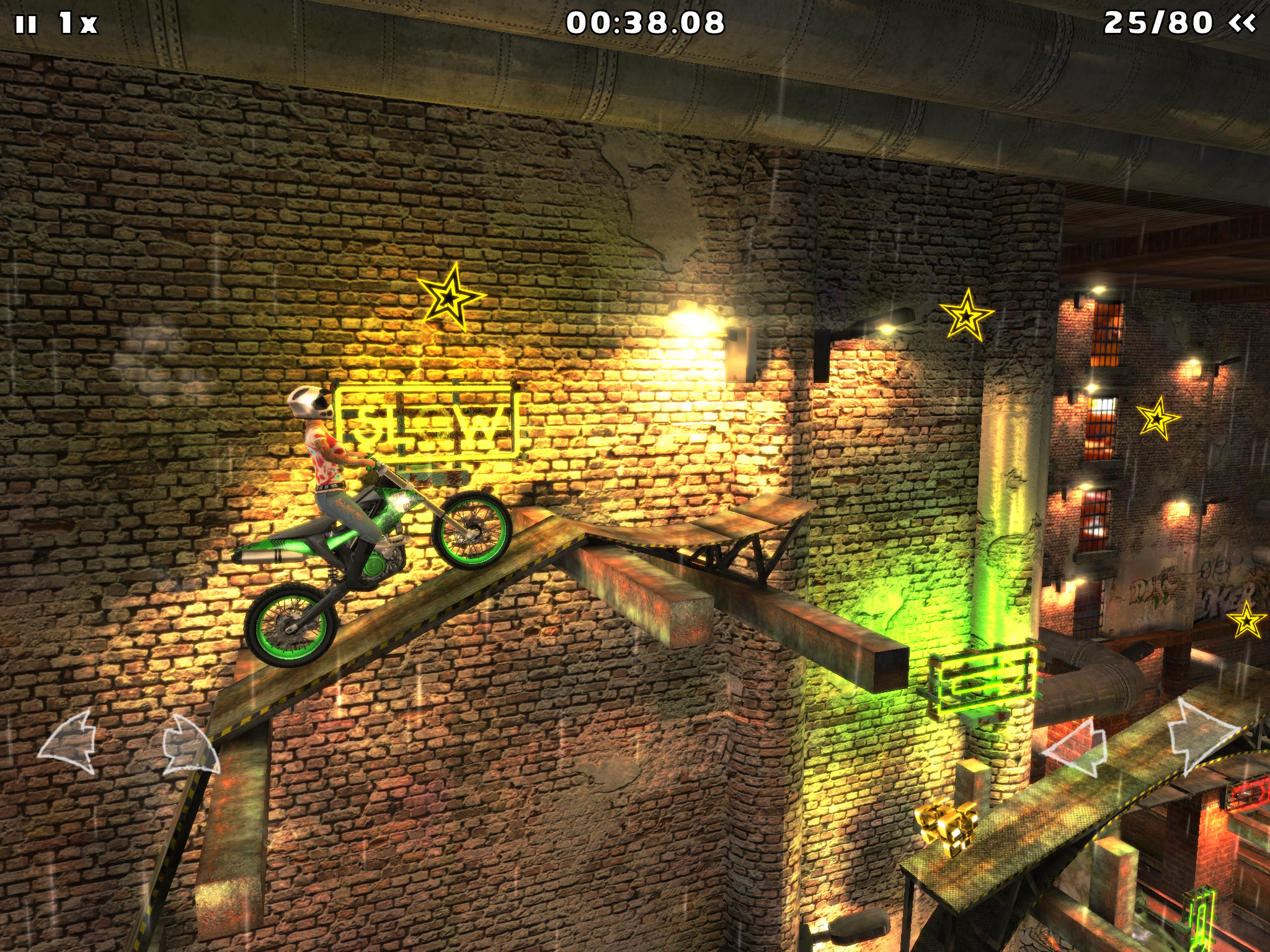 Rock(s) Rider HD is the HD remake of the 2012 Rock(s) Rider ($0.99), but since we didn’t review the original, I thought it was a good opportunity to review one of the best motorbike racers on the App Store. The two versions are so similar that the developers had to go on the game’s website to explain why the company has developed the new, HD edition. Apparently, improving the visuals to match the company’s ambitions meant that older devices couldn’t survive all the new effects and the huge number of objects strewn around the levels. Keeping in mind that the 2012 game pushed devices to their limits when it came out, it makes sense why both a new game had to be developed and that this new game would exclude any iPhone below the iPhone 4s. As we wrote about last month, the difference in the visuals between the two games shows how far iOS hardware has come in a mere three years. One can only imagine how Rock(s) Rider Super HD will look like in 2017.

And this game’s visuals are, indeed, really good; the levels are littered with all kinds of objects that interact with your bike – from empty plastic cases to soda cans – all of which offer a degree of realism to the game and an extra layer of challenge as some of those objects can really distract. The textures are also sharp and do a great job of turning what would otherwise be ugly, dark factory settings into fun playgrounds for your biking escapades. The visual improvement also extends to those pesky, persistent flames that occasionally chase your rider; trying to outrace a spreading fire is particularly fun, and that wouldn’t be the case if the developers couldn’t pull it off technically. While the levels look very nice, I can’t say the same about your rider since he or she look extremely wooden in the menu sections and just barely ok when racing. The riders and the menus didn’t really get a lot of love in this remake, and it shows. 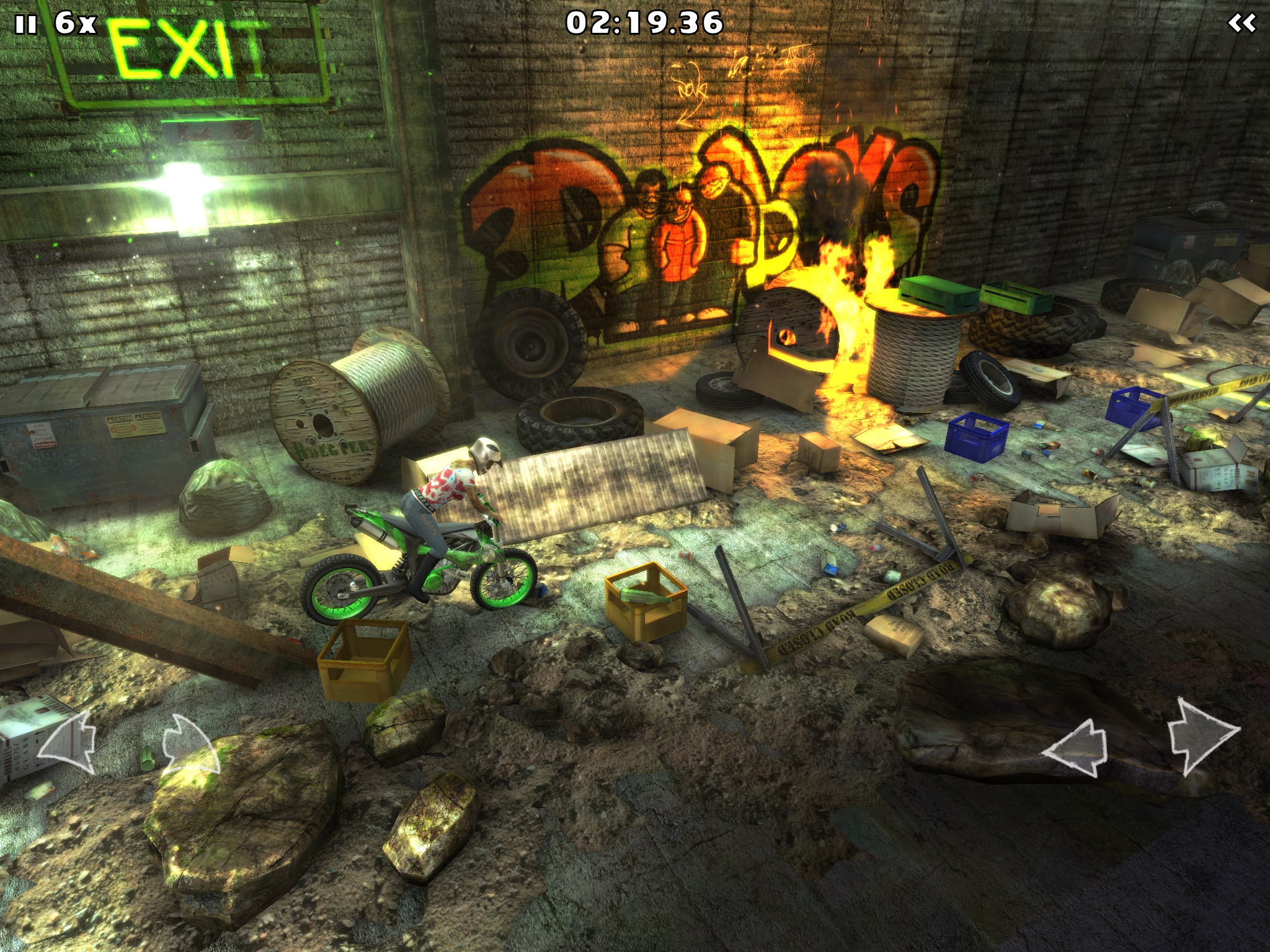 If this game was simply a collection of pretty vignettes, I probably wouldn’t be reviewing it now because it wouldn’t be much of a game. So, what’s the game actually about? Fortunately for us, Rock(s) Rider HD is very fun to play, the kind of game that’s all about glorious, repeated failures on the way to a satisfying victory. It is very heavily “inspired" by the famous Trials console franchise in the way it forces your rider to overcome various levels filled with extreme obstacles. The game has an extremely thin story, and in typical mobile game fashion, each level has three medals awarded for beating a specific time. When you are feeling extra confident, you can place a bet with the hope that if you beat the designated time, you’ll make even more money. Each time you take a lovely tumble during the level, you lose some of your reward money; in that way, flawless and fast playthroughs earn you the most money.

The issue, though, is that you don’t really have much you can do with the money you earn. While the game does give you the ability to buy outfits or motorcycle skins, which you otherwise have to either discover in the levels or earn by beating the various bosses, their cost is really high. I think a better way to have gone about this would have been to have an actual store where you can buy various decals for your bike or pieces of clothing for your rider so you could better customize your rider while also having a place to spend the money you earn. You can, of course, unlock all the skins and outfits for $1.99, but I’ll talk about that part later in the review. 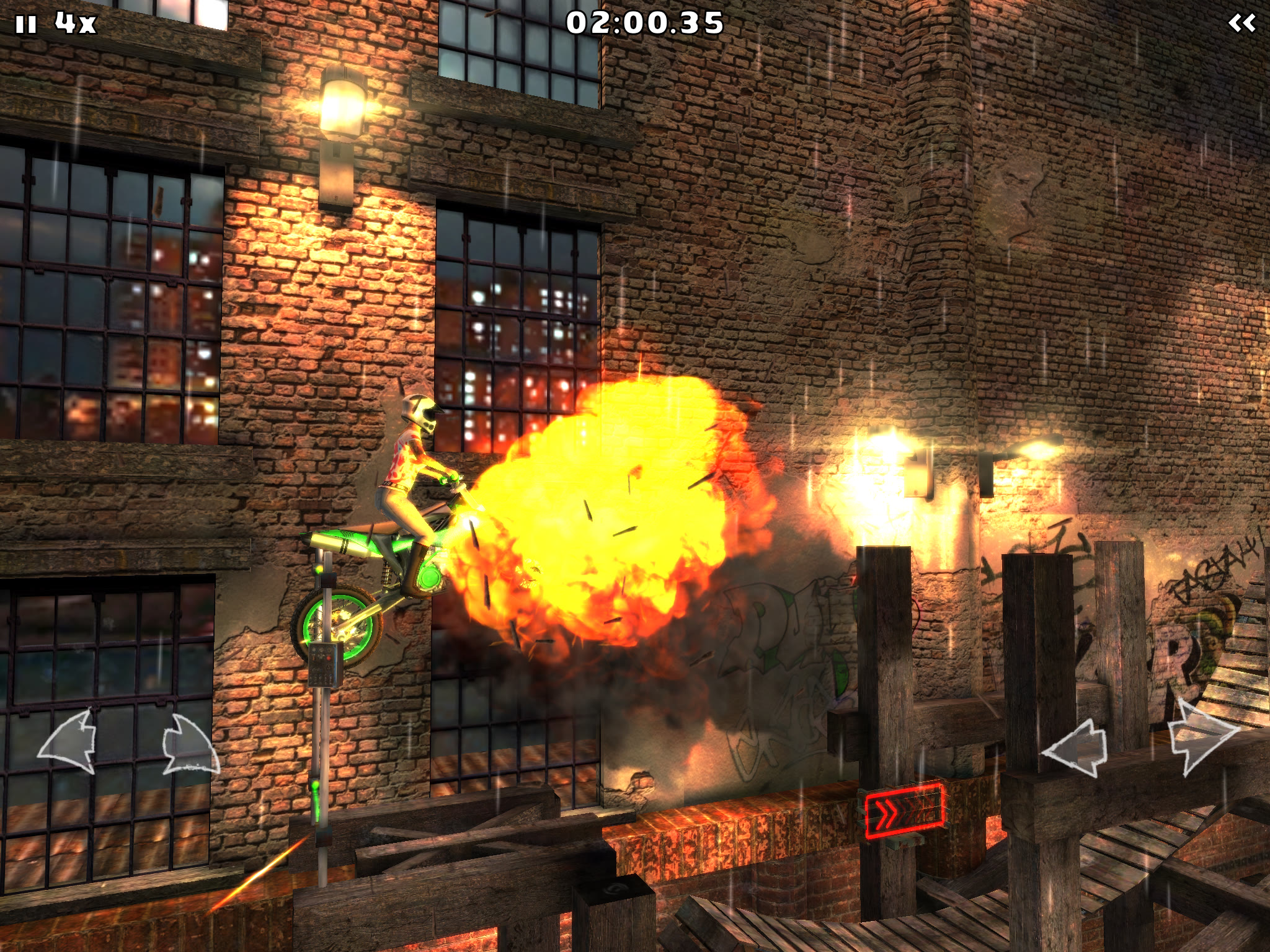 The game has plenty of content to race through, offering 64 levels in 5 environments, 8 tricycle racing levels, and some entertaining climbing levels. When you consider all the various challenges, the perfectionist drive to get gold in all the levels, the boss races, and all the hidden skins and outfits, you can see just how much content this game offers. One issue, though, is that while there’s a plethora of levels to play, the levels look too similar to the point where it gets a bit tiring. Yes, I know the theme of the game is underground, illegal racing, but I’m sure these riders wouldn’t have objected to racing outdoors or in abandoned malls once in a while; seeing factory after factory gets old after a bit.

Since the multiple levels are so challenging to play through and the obstacles quite imaginative, you need to be able to control your rider very well if you are to prevail, and, fortunately, you can. The controls, which are simply gas, breaks, lean back and lean forward, are sensitive enough to allow you to control your rider quite well and with enough practice, you can send your rider over, under, and through obstacles at will. However, for such a demanding game, I was surprised to see that it doesn’t offer the ability to customize the size and location of your controls, only a few different control options that you can choose from. 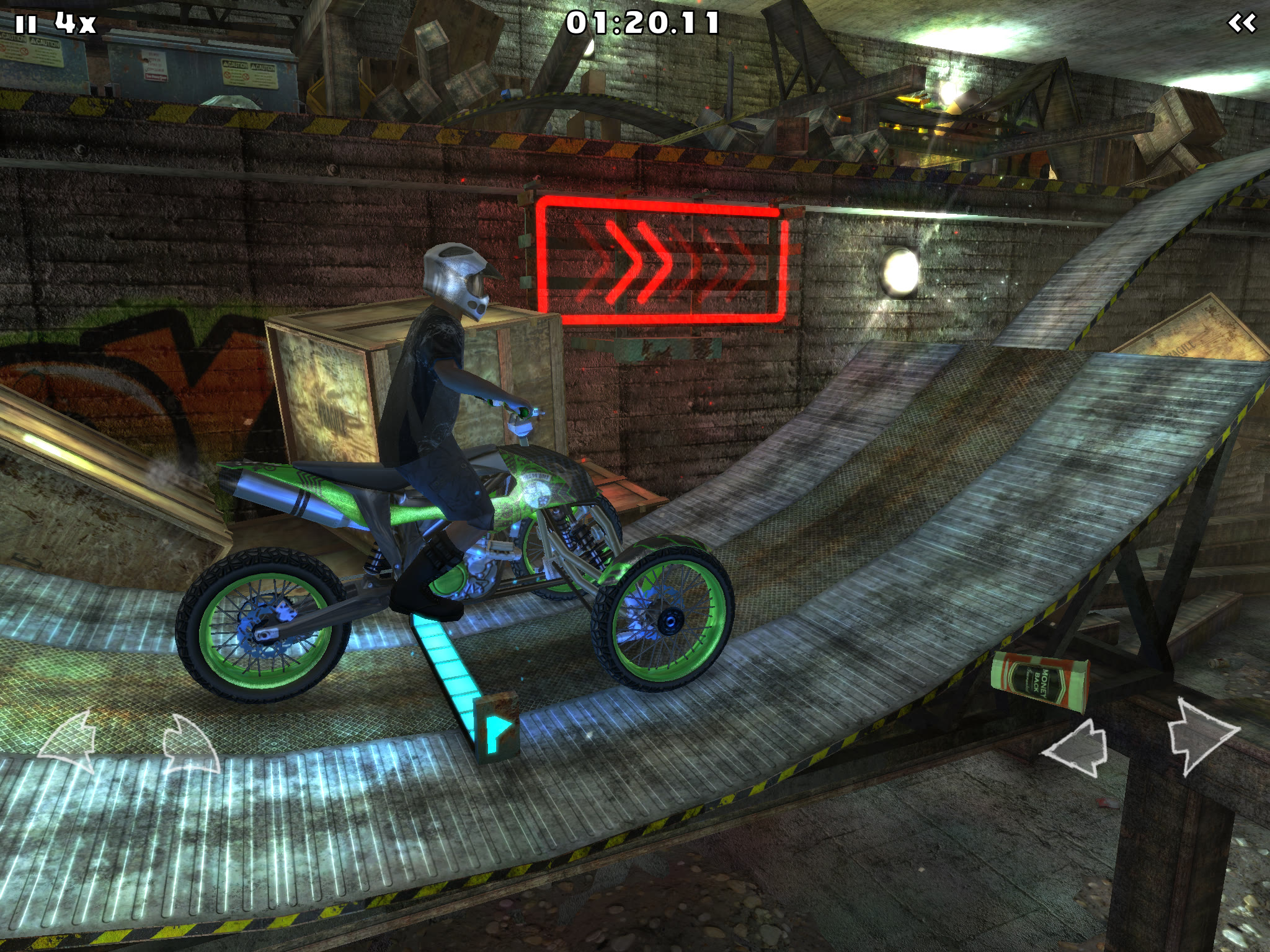 Especially when playing on the iPad, I found the controls to be on the small side and the buttons too close to each other; if I had the choice, I would have definitely customized my controls so as to play the game better. And speaking of button size, the quick retry button, necessary in a game where you often want to go back to your previous checkpoint as fast as possible and start racing again, is seriously tiny on the iPad and sometimes unresponsive. The size of the buttons is much more appropriate for the iPhone version and looks to me like the developers didn’t put much thought into how those controls would translate to the larger iPad screen.

What I found occasionally annoying when playing Rock(s) Rider HD was how sometimes the game throws obstacles at you that the first time you play can only be avoided by luck rather than skill; for instance, the levels are filled with low hanging beams that will often take your head off unless you rider happens to be riding low at that part of the level. Now, that would be a fine obstacle if you knew there’s a beam coming up, but most often you don’t. This game should be about your skill at overcoming the various obstacles, but since there are moments when you don’t even know the obstacle is coming, Rock(s) Rider HD turns into a mind-reading exercise as you try to guess what obstacle might be coming your way as you race at top speed. 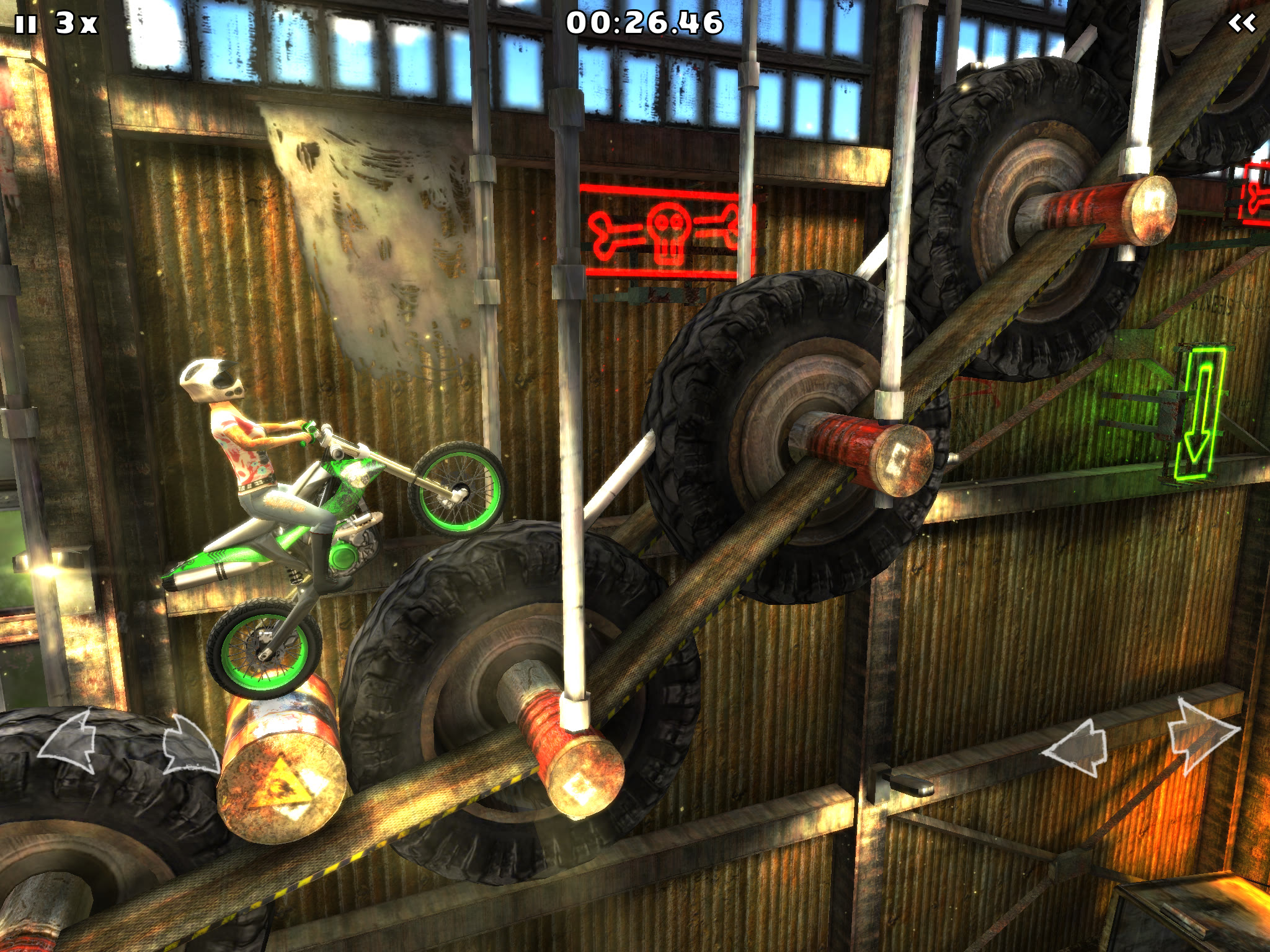 The game does offer blinking neon signs that help you navigate the levels, but on many occasions if you follow them you’ll crash because for instance, the game tells you to slow down, but it’s actually telling you don’t slow down immediately but rather in two obstacles from now; in other words, if you obey that signal, you crash. Another common issue was getting to a point in the level where you wouldn’t be able to get back on track (falling down a gap, for instance), but because you don’t lose immediately, you waste valuable seconds trying to see whether you are still racing or not; I’d have preferred to die immediately so I could get back to tackling the level without wasting time.

While I did have some issues with the level design and some other design choices, the game is undoubtedly fun to play, and that helps (mostly) make up for those issues. Yes, some obstacles are silly, but when you get going and the level is flowing around you while you are climbing over this and that perfectly, the game offers a great sense of satisfaction. Add to that the great visuals, and Rock(s) Rider HD is definitely a fun game to own. Now, the game is premium and universal, but there are some…interesting kinks in that monetization model. While the game costs $2.99 to buy, some add-ons, namely the Safety Cage and Nitro Oxide, cost $3.99 each. These aren’t needed to complete the game, but according to the game’s website, they help you beat obstacles easier. To be honest, I was surprised not at the fact that they are there but at their price when compared to the game’s price. Still, they aren’t needed, so you can’t complain about them much.

The “Unlock Career" IAP, though, is trickier. The game doesn’t offer cloud saving, which means you have to either play the levels once on your iPad and once on your iPhone to unlock the game’s levels, or pay to unlock the whole career. At this day and age, one shouldn’t have to pay an IAP just to get around a feature that should have been part of the game. Still, again, if you are willing to play all the levels on both devices, the IAP isn’t necessary. In other words, you can treat this game as a premium game or as a premium game with extra content IAPs, and when you consider that I didn’t find any difficulty spikes resembling paywalls, I can’t really complain much. So, despite the slight level monotony and the mind-reading skill you’ll occasionally need, Rock(s) Rider HD is a really fun motorbike racer that will offer hours of frustrations interrupted by brief, but very sweet, moments of triumph.