Way back in the before times, when I was a little fellow attending elementary school, I often found myself doodling on the paper in front of me. Well, to be honest, I did that in junior high school, high school, and university, too, but that’s neither here nor there. The point is, my imagination wandered frequently, and conspired with my hand to try to keep the whole system from going to sleep. I feel like I drew all the standard things: dinosaurs, super heroes, video game characters, the screaming souls of the damned as they burned in searing agony for all eternity, fighter jets, ALF, and of course, space ship battles. I would doodle an assortment of ships on the left, another group on the right, then simulate their battles. Sentinel Command ($3.99) reminds me of those hand-sketched battles, but with rules, challenge, and all kinds of good things like that.

The story of Sentinel Command is set during a huge galactic war, but you’re not on the frontlines this time around. Instead, you’re back home, trying to keep up production of valuable resources for the war effort. It’s not all accounting and shareholder meetings, though. Enemies are constantly attacking your resources, striking from hidden bases scattered around your domain of Kernwall. You have three goals in this game. One of your main goals is to gather a lot of neoplatinum, the game’s currency. It’s used for upgrading your fleet of ships, but more importantly, you can give it to the leaders of allied territories in order to help them do their part in the war. Giving them neoplatinum will not only help keep the enemy at bay, but will also grant you access to new technology. If you can’t help them out, the enemy will get a foothold in their territory, making them stronger. It’s therefore critical that you have enough neoplatinum to honor requests by the time the leaders convene. A timer counts down to the next meeting so that you won’t unwittingly blow your whole stockpile just before your allies make their requests for help. 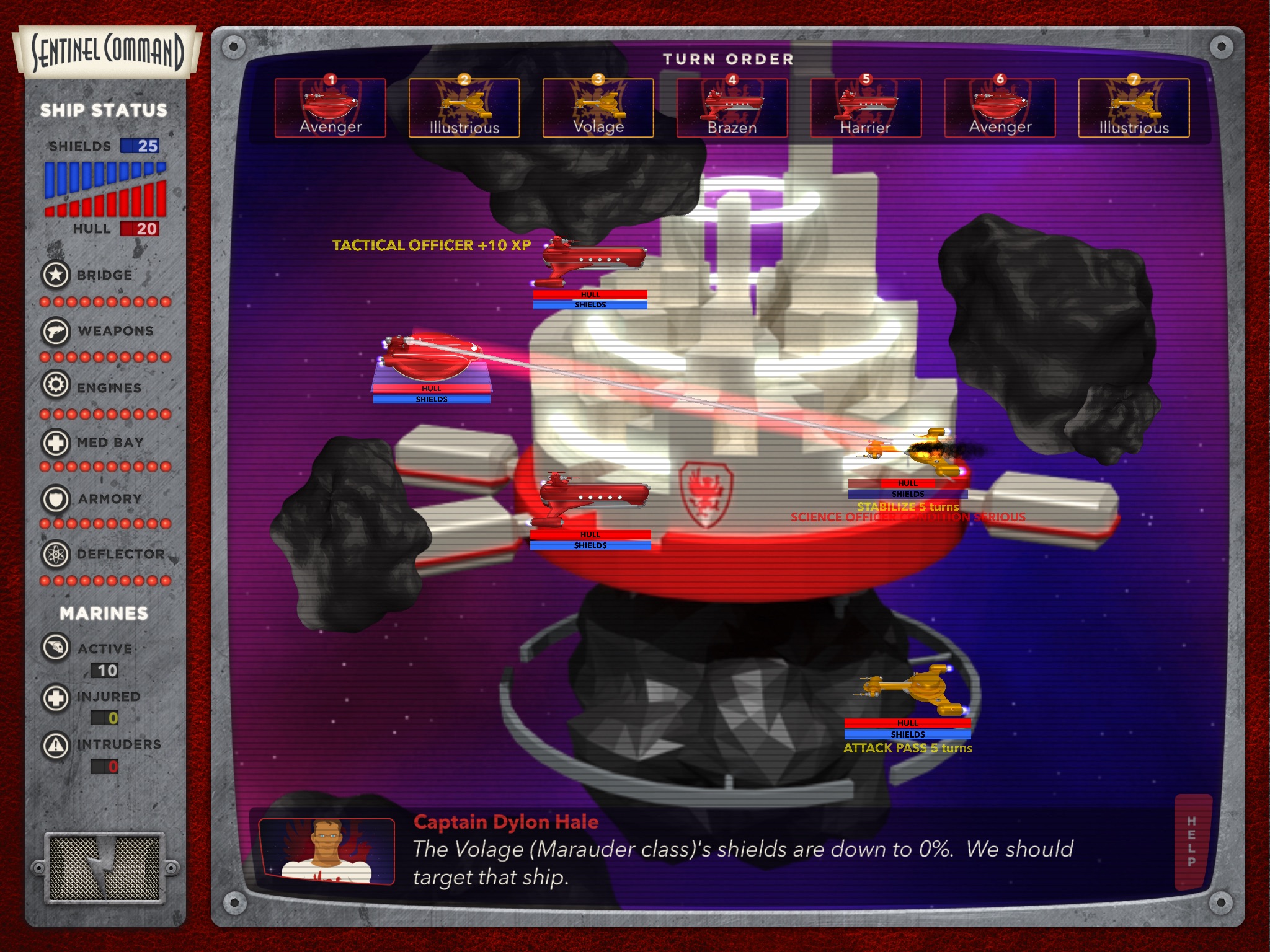 Directly related to that goal, you’ll need to fend off the enemy attacks on your resource points. If you fail to do so, you’ll receive less neoplatinum and have lower odds of being able to contribute to the war effort. Attacks come steadily, so your fleet of ships is almost always going to be on the move in one direction or another. They’ll only recover from those battles by returning home and resting, crucial time you’ll surely spend watching the health percent on your mines or refineries go down. Still, you’ll want to make sure they stay in good shape. A damaged ship repairs quickly enough, but if it gets a serious hull breach, it will have to dock for an agonizingly long period. Staying on top of these attacks is a busy job, but the perks are pretty good. At the conclusion of each battle, you’ll be able to scavenge extra neoplatinum or recover an enemy escape pod for a chance at some intel or new crew members. That carries a bit of risk, however, as the escape pod does have a small chance of damaging your ship or injuring your crew members.

That leads to the other big goal, which is sniffing out and destroying all of the enemy bases hidden in your domain of Kernwall. If you’re lucky, you’ll discover the location of a base from a captured enemy escape pod. You’ll then have to field a fleet strong enough to crush the base, all while making sure nothing else catches fire in the meantime. Once you’ve found all the enemy bases, you win. It will likely take you several hours to do so, and the game offers multiple difficulty levels, so you’ll certainly get a good chunk of play for your money. It’s just a bit confusing overall, though. For a long time after starting, I was expecting the game to open up beyond my domain of Kernwall, but no, that’s all there is to it. Which is fine, mind you, it just feels unusual for a game to show you such a big picture but only let you play in a small, relatively unimportant part of it. 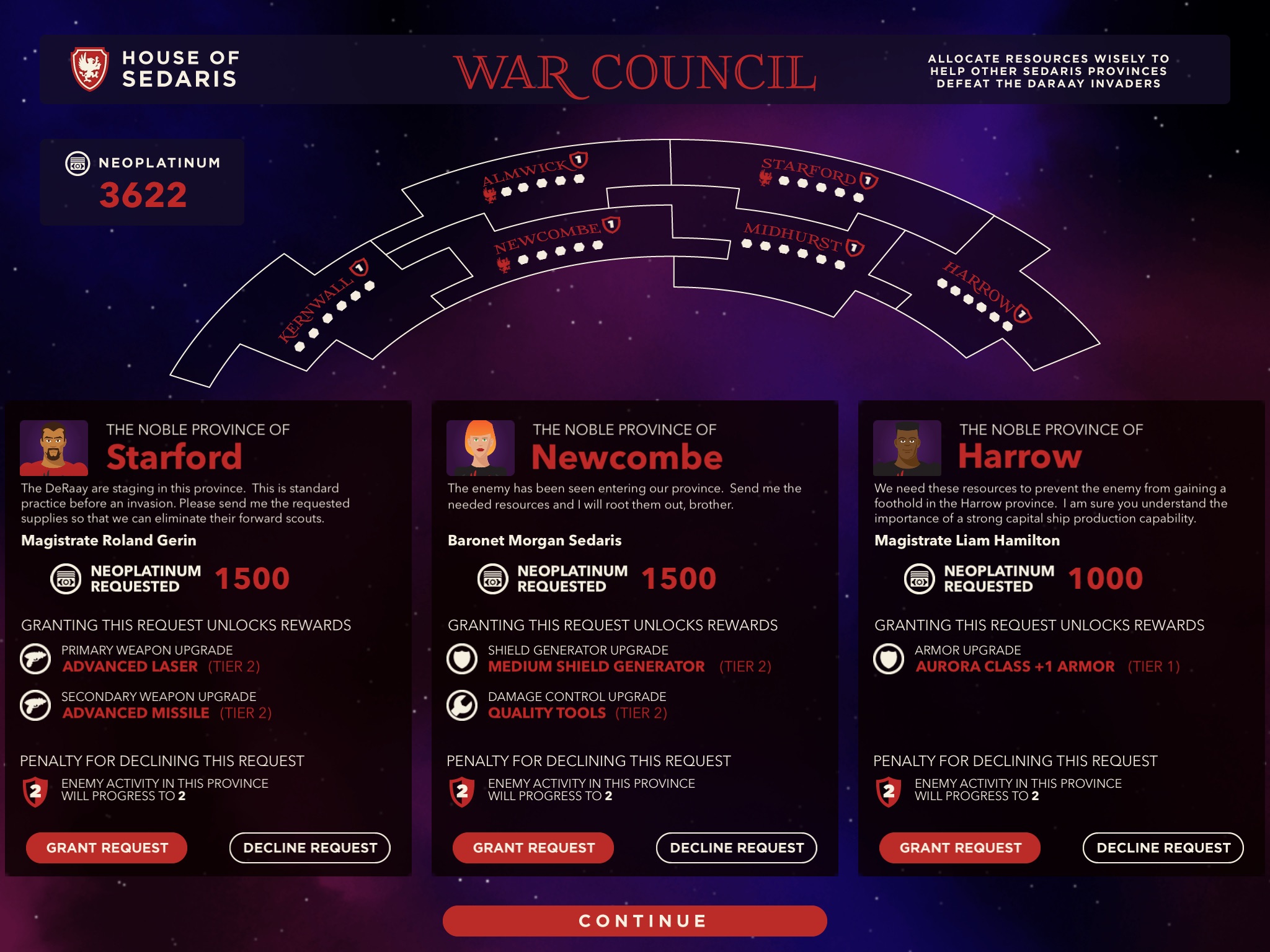 Another misconception I had at the beginning was as to how much I would have to manage things in my domain. It feels like you should be doing more, but you’re really just in charge of keeping your fleet upgraded and combat-ready. You can choose where to deploy them, and pick their upgrades, but that’s as deep as the game gets outside of combat. In combat, you’ve got plenty of options, but it’s hard to make a case for using most of them. The battles line up your ships on one side and the enemies on the other. When each ship’s turn comes up, it can have one of its crew members perform an action. Engineering can charge up the shields, the captain can issue a buffing rally cry, the helmsman can engage in evasive maneuvers, and so on. Although your crew starts off with just one or two abilities each, they’ll gain experience with each move they take. When they level up, they’ll get points that you can allocate towards unlocking new abilities. Fully-leveled, each of your six crew members has six actions to choose from, giving you a whopping 36 possible choices on each turn.

In practice, you’ll probably be leaning on your tactical officer and his trusty ability to shoot the enemy. Fortunately, all of your crew gain experience when you make a kill, so nobody gets left behind. There are times where you’ll want to use another crew member’s skill, with the engineer being quite important in a pinch, but it feels wasteful to have so many possible actions and little opportunity or reason to use them. It’s a problem typically seen in JRPGs, and that’s perhaps quite appropriate, because if we were to wash away all the delightfully-retro science fiction stuff and replace it with stylish teenagers, the battles in Sentinel Command would be nearly indistinguishable from those found in a JRPG. It’s an interesting choice for a strategy game, and I kind of dig it. I just wish more of the abilities were useful. 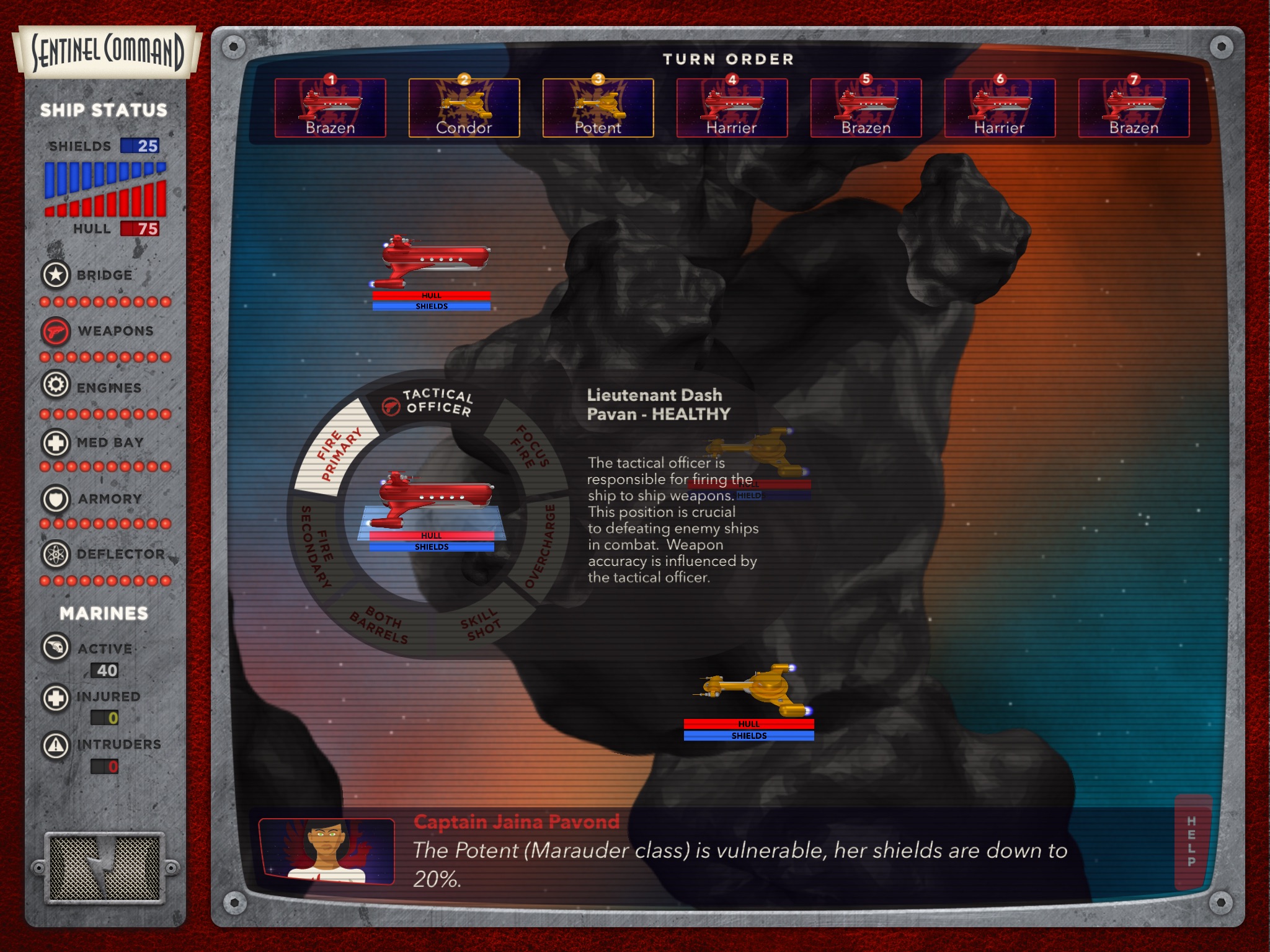 Helping out your allies opens up tech, and experience points level up your crew, but to actually improve your fleet, you’re going to need to use some of that hard-earned neoplatinum. It’s enjoyably stressful managing that resource. If you scavenge after every fight, you’ll surely have enough neoplatinum to upgrade your ships and help out the other domains, but you’ll never find any enemy bases that way. You’ll need to risk recovering escape pods here and there, not just to locate enemy bases but also to get better crew members and upgrades. It’s up to you how often you want to spin that particular wheel versus taking the safe route of scooping up cash. That provides a nice balance to the progression of your fleet, making you truly value the occasional chances to spare the neoplat and finally upgrade something. Between that satisfying power development and the fairly fast pace the game keeps you moving at, you might not even notice that most of the game is spent using most of the same strategies over and over again.

Also pitching in on that effort is the wonderful presentation. Oh, it’s not the stuff of high budgets, but then, neither was classic sci-fi. The whole UI is designed with the look of old movie serials like Flash Gordon, with the ships taking on a variety of forms that wouldn’t look out of place in the original Star Trek universe. The music matches the graphical tone nicely, and the sound effects do their job as well. Everything from lasers to explosions all sound just like they should, and when you finally blow up a ship, the resulting blast feels really good. Even a simple attack gives you great reinforcement, with all kinds of numbers popping up to tell you which parts of the ship you damaged, and to what extent. The animations on the ships when they evade an attack look pretty hokey, but that also plays into the motif quite well. 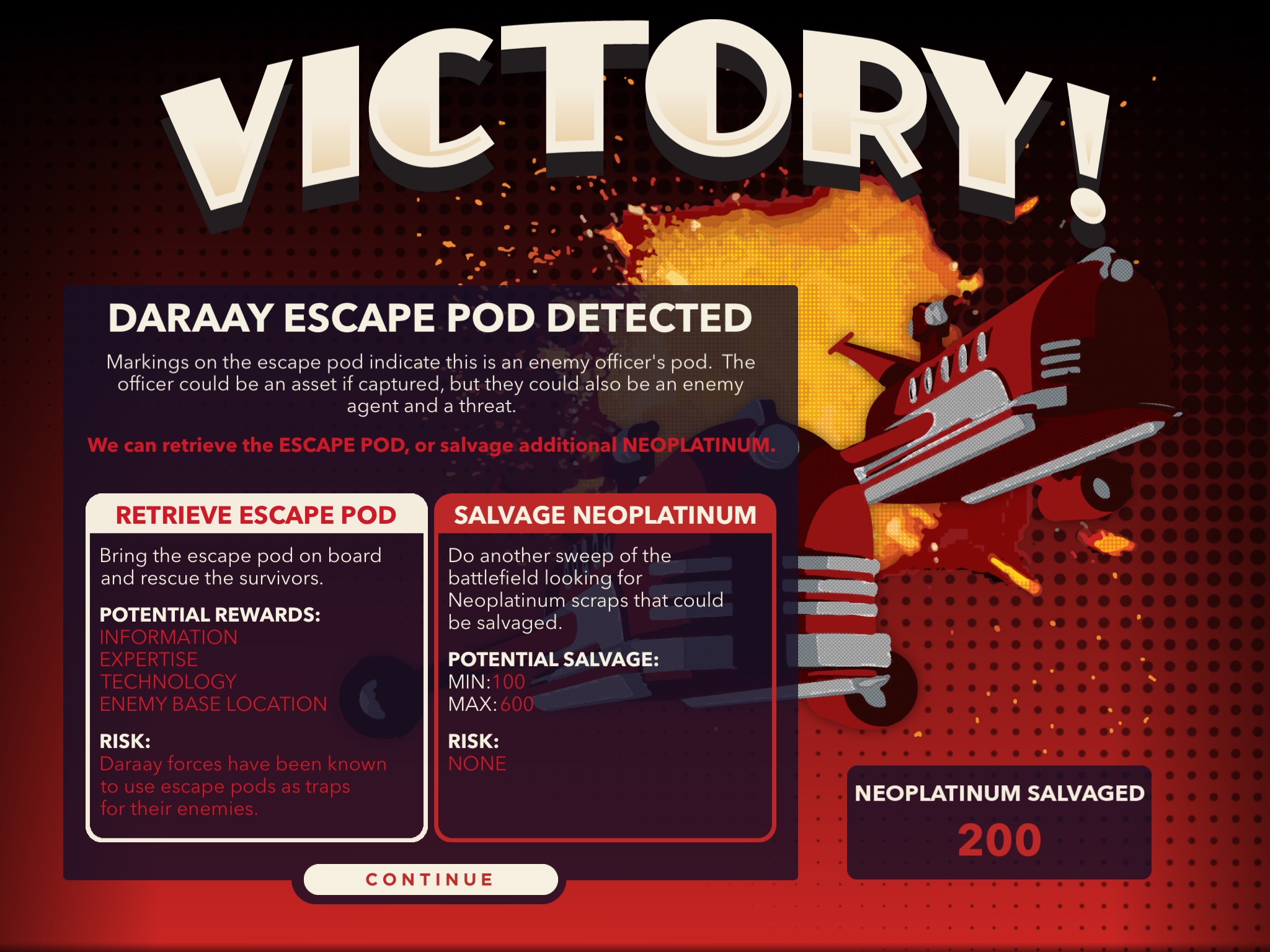 If you love classic sci-fi, can enjoy light strategy games, and don’t mind dealing with a somewhat unbalanced skill system, there’s a good chance you’ll really enjoy Sentinel Command. It offers a pretty unique story perspective, and the ship combat is challenging enough, and importantly, very satisfying. I like that it keeps you busy and forces you to make some hard choices with regards to resources. My desire to power up my fleet of ships and the crew aboard them made it very easy to jump from one battle to the next, hoping to procure some new technology, experience, or resources so that I could bump my team up in one way or another. I could poke little holes in the experience in any number of ways, but in the end, I had a lot of fun reliving my childhood classroom scrawlings through Sentinel Command.