Sling Kong (Free) is a game that I’m highly ambivalent about, for many reasons. I came in hotly anticipating it, because Protostar’s Checkpoint Champion (Free) is a game that’s practically flawless. Sling Kong uses a slingshot-style system that’s close enough to my favorite game mechanic of grappling hooks, such that I found myself absolutely anticipating this one. I finally got my hands on it, and while it’s fun, and definitely worth downloading, it’s a game that does a few things wrong, though I understand why those decisions were made.

The game has you launching your cute animal protagonist from peg to peg, pulling back like a slingshot to launch them upward. Hope you don’t like cute animals dying, because death comes quickly and often in Sling Kong. Flame-shooting plants! Crushing block mechanisms! Buzzsaws! The jungle is a very dangerous place! Plus, with the 40 different characters to play as, including a virus, you’re going to see some creatures out of their natural habitat, too. 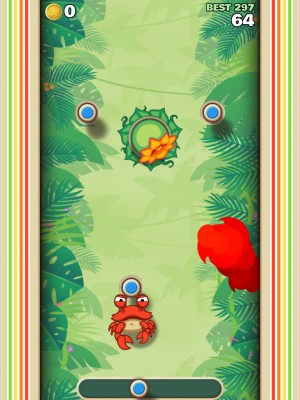 The production values on Sling Kong are absurdly great, just as they were on Checkpoint Champion. The term “polish" is overused, but man, that might just be the best way to describe the game. Protostar put every effort in possible to make this game look as good as possible. The characters are animated in great ways, and there’s a ton of subtle effects to add to the flourish. The pig explodes into bacon, the snowman is slowly melting. Appealing characters are a significant part of these sorts of games, and Sling Kong has them in spades. Also, the game shows you the high scores of other players as you advance up the board, a personal favorite feature of mine. It keeps me signing into Game Center, even though iOS keeps logging me out for some reason!

I do feel like the gameplay is very particular about whether you do well or not. The angles to get to the next peg are sometimes so tight that it’s difficult to tell just what’s safe and what isn’t. One little tweak one way or another might lead to your doom, or to your advancing. Or sometimes, to you just bouncing back to the peg you were previously on! I would not mind having an aiming arrow, or the ability to touch-and-drag anywhere on screen to aim, as far as controls go.

Failure often feels like it’s at the whims of the game, and not so much for any practical reason. What might make sense is if there was some sort of encroaching threat, like a rising flood or lava, that described why you have a lot more leeway in falling down to your doom than what was safe before. Odds are, you’d hit a spike or danger point regardless, but still, it feels like the game deciding when the ‘fall to your doom’ point is and when you can fall back to safety.

Still, Sling Kong‘s merciless difficulty is in service of the game being a quick-play game. Games can only last a minute or so, if even that, so you feel like it’s easy enough to jump back in to the next game. So, while you will experience a lot of failure, at least you can keep on going and going. It is an interesting design, for sure. The revives seem to be only available at certain times. I don’t have a problem with this, but sometimes the game will give you a video ad instead of a revive, it seems. I couldn’t quite figure out the rules of how it’s supposed to work. 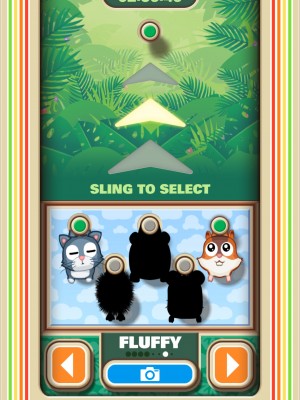 I love the way that so much of the game is meant to fit into the slinging. You do the lucky sling by slinging your character at the rapidly-spinning wheel. The character select has you choosing from different creatures via a menu of the different types, but otherwise you sling to select the one you want. It’s a pretty cool setup. The game really does a great job at fitting within itself, so to speak.

I do feel like the game misses the point of the Crossy Road business model, though. For example, if I see a character that I want, I can’t just immediately pay money for it. It is possible to buy more coins to get more shots at the prize game, but it’s still not a guarantee. And the rate at which you get coins from video ads (by far the easiest way to get them) is enough that by playing the game, you can get enough to play another round. Perhaps this might spur more in-app purchases, but Crossy Road worked because you could choose between luck of the draw and just paying outright for what you want. So, this doesn’t feel like something other games should imitate. Though, again, maybe it makes more money. But as a player? I prefer it to a lesser degree.

Still, winning each character in the prize mode is fun, because the bonus mode reminds me a bit of Sonic 3 and Knuckles‘ bumper bonus room. Hey Sega, you should port that game for mobile! It’s chaotic, and you don’t know just which character you’ll get, but I don’t know, it’s interesting because you don’t know what will happen. Plus, having the five characters available to win (that cycle over time) lets you know what you could get, instead of having a random character from a hundred or so to try and get.

Sling Kong‘s core mechanic is fun because slinging feels good, and Protostar puts in all the work they can into their games to make them look and feel as good as possible. Seriously, I don’t know how they do it, but I’m glad someone’s out there applying this level of detail to their games. I have some misgivings with how the systems work, but I still recommend at least giving this one a spin. I mean, there is a pig that explodes into bacon.