I’m roughly 90 minutes into Final Fantasy VII so far, and I streamed my whole play session over on our Mobcrush channel. Here’s part one and part two, a small WiFi SNAFU broke the stream about half way through. Anyway, I guess the supreme tl;dr of my first impressions of FF7 is this is the port you’d expect, and I mean that in both a good and bad way. It appears to be a port of the PC version of the game, which means the graphics are ever-so-slightly better than the original PlayStation version, and on my iPad Air 2 it runs flawlessly. As far as thoroughly stoking the coals of fiery nostalgia for this epic RPG, this port will definitely do the trick, and all the more janky aspects likely won’t come as much of a surprise if you’ve played any of the iOS Final Fantasy ports released on the App Store so far. 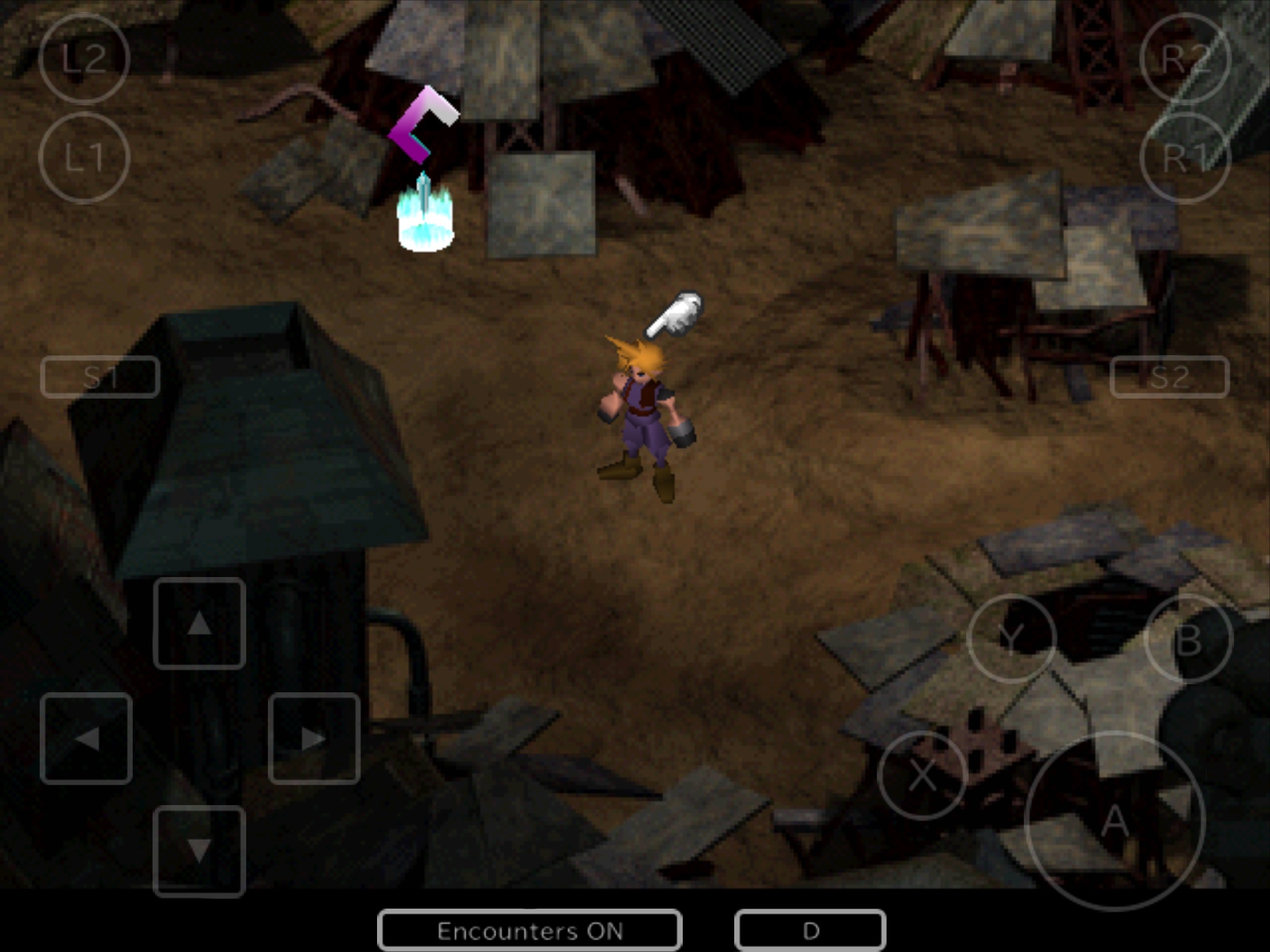 The game is played with a mess of on-screen virtual controls which work totally fine for the (typically) slow-paced gameplay of FF7, but feel far less than ideal. Character movement is handled either via a super-rigid on-screen D-pad or a much better virtual analog stick. Toggling between the two is easy, as for some incredibly crazy reason, the toggle for such thing constantly lives at the bottom of the screen. Said button reads “D" when you’re in D-Pad mode and “A" when you’re in analog mode. Seems weird, but this is just scratching the surface of the odd things about this port. All the other buttons of the original PlayStation controller are represented in the various corners of the screen. I’m not looking forward to this layout for faster-paced parts of the game, like chocobo racing, but I’m sure I’ll figure it out.

Diving deeply into the game’s menus reveal some additional control options, which allow for limited tweaking. The opacity of the controls can go all the way up to 100%, or down to 0%. The controls initially look pretty obnoxious, but considering you’re just going to be using a virtual joystick and the select button a lot of the time, I feel like you could pretty easily rock 5-10% opacity and just squint a little harder when you need to hit any non-standard button. Also, there’s four different layouts for the buttons, but there isn’t much difference between them. They either squeeze the controls towards the middle of the screen, the top, or the bottom. 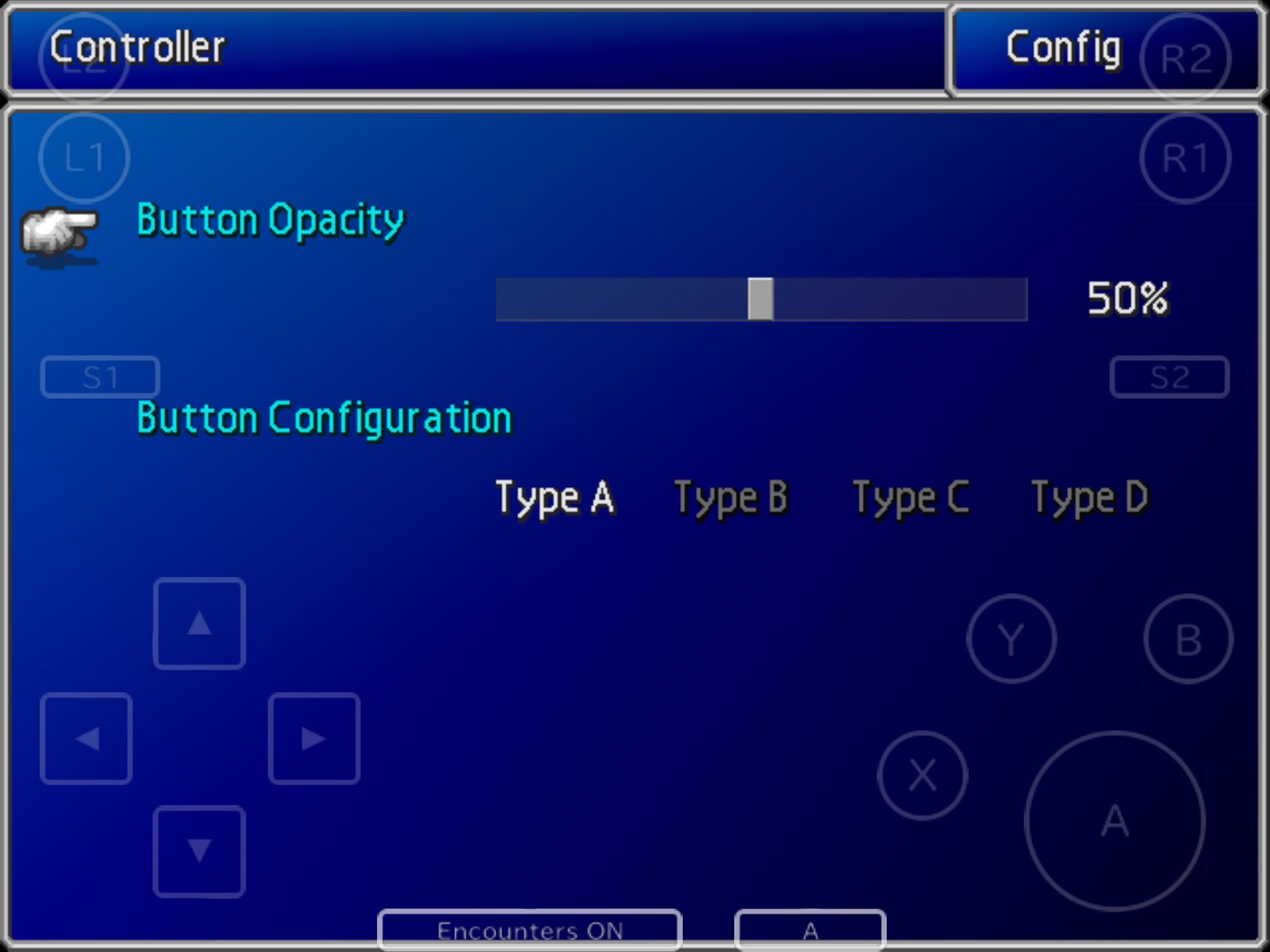 So, you probably expected some weird virtual controls, but from there, things get weirder. Next to the ever-present toggle of the virtual D-pad and virtual joystick is a button, which is always on the screen, for you to enable or disable random enemy encounters. I’m not sure if I’m a purist, a curmudgeon, or a little of both, but this is really annoying to me. It’s like having a cheater button on the screen at all times just always taunting you. As far as I can tell, there’s no way to disable it. So much of playing these games is dealing with random battles, coming up with an inventory strategy, and having the overall stamina to make it through different areas an ultimately fight a boss. Sure, random battles can get annoying, but just having a toggle to turn them off entirely always taunting you?

Stranger yet, this isn’t the only cheater option the game has. Inside of the game’s menu, on the same screen where you customize controls, the color of the text windows, and other things, you can max the stats of all your characters. Not even joking. One quick dive into the menu and all your dudes are level 99, with 9,999 hitpoints, and just for sh*ts, they also give you 999,999,999 gil. On the up-side, at least this just isn’t always staring you in the face like toggling random battles on and off, but it’s real weird that this is all just there tempting you. I’m not even sure what the logic behind this is, as if you decided to download the game, immediately level all your dudes to level 99 and turn off random battles, what would even be the point of playing? 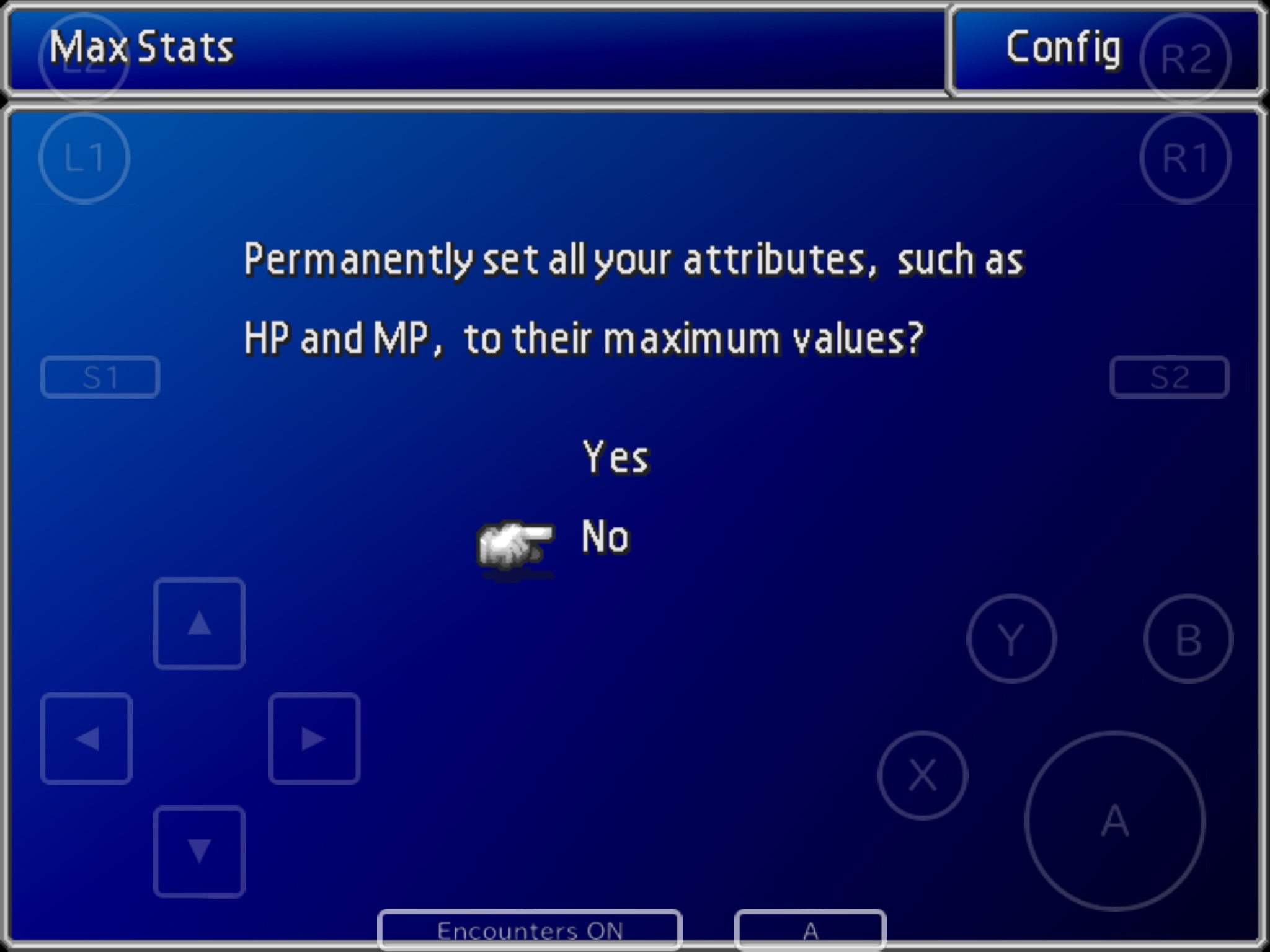 I guess it’s good they give you the option for this, but I feel like this kind of thing shouldn’t be so front and center, right? I’m not being crazy about this, am I? Back in the days when FF7 was released, enabling this kind of thing in video games would require either beating the game first or using some kind of cheat code/device. Odd. Real odd. But, hey, I concede the fact that maybe there’s people out there who just want to experience the ellipsis-filled plot of FF7 without futzing around with any of the battle stuff. It seems insane, but, there might be someone out there. At least games with “pay to win" elements have those “cheats" gated by paying money, instead of just always being there.

But, hey, it’s not all bad. They included iCloud syncing, and didn’t half ass this. It’s the good kind of iCloud syncing where you totally manage when your saves get uploaded and downloaded. So, say you’re playing a ton on your iPad. When you eventually reach the end of your session and save, you can get back out to the main menu and just upload that save to iCloud. Then, on your iPhone, you can similarly manually download it. This is my favorite type of iCloud syncing, as if there’s one thing you can count on with automatic iCloud syncing, it’s a total f#$& up. This gives you a real clear idea of what you’re doing too, both showing relevant data about both your local save and your iCloud save, so if you mess it up… It’s your fault, not Apple automagically nuking your save game.

The in-game menus have an “auto save" function as well, but I can’t for the life of me figure out how it works. It’s entirely possible I’m overlooking something obvious, but if it’s automatically saving anything I’m not sure where it’s saving to or how to then re-load that save. I’ve tried a bunch of different things to try to trigger auto-saving including getting in random battles, walking in between screens, and no matter what when I close the app (force close it, via double tapping and swiping up) I’m loading in back from my last save point. I’ll concede the fact that I might just be an idiot, but I can’t seem to get it to work… Which seems kind of troubling considering save points in FF7 were designed for console-style play and typically seem to be spaced around 20 minutes of play time apart. That’s an eternity for a mobile play session.

But, hey, it’s Final Fantasy VII on your iPhone. This is the kind of thing that would be a joke to even suggest as a possibility not more than a few years ago. If you told my late 90’s bowl cut and ball chain wearing skater self that 18 years later I’d be playing it from the toilet on a cell phone, I’d probably ask you, “What’s a cell phone?" (Although, in 1997, I probably knew what a cell phone was, but you get my drift). For people around for the original release of Final Fantasy VII, this kind of thing is just really cool, even with a layer of jank spread across it all like well buttered bread. Additionally, I suppose on the spectrum of things Squeenix could’ve done to screw up this port, some weirdly obvious cheater options and the not that great virtual controls you probably already expected, we could’ve done a lot worse.

Shaun is working on a “full" review for us, and if I know Shaun, he’s probably going to wax intellectual about the plot of the game and all sorts of other things. I’ll just leave you with this: Love it, hate it, or never played it, Final Fantasy VII is an iconic RPG. It’s one you need to play, and one that’s worth revisiting, even if you only play it long enough to get the inescapable twinge of nostalgia when Aeris’s theme plays.